HoloGrid: Monster Battle isn't Star Wars: HoloChess, but it's close and on Kickstarter

Share All sharing options for: HoloGrid: Monster Battle isn't Star Wars: HoloChess, but it's close and on Kickstarter

It takes less than five minutes into my meeting with Mike Levine, president of developer HappyGiant, before he smiles behind his beard and drops his first goodnatured f-bomb.

"It's really a giant fuck you to the free-to-play model," Levine tells me standing among tens of thousands of attendees at PAX East, in front of an iPad showing a pre-release version of his unreleased game, HoloGrid: Monster Battle. He's explaining his plan for the game, and it's nothing if not bold.

I have no idea if it'll work. Sometimes, there'a a fine line between bold and unrealistic. Either way, I can't stop thinking about it.

HoloGrid: Monster Battle, he tells me, takes the world's most popular app distribution ecosystem but rejects the most lucrative way to make money there. It takes a bit of inspiration from a popular toys-to-life franchise, mixes it with real-world cards, though he rejects the idea of a purely digital purchasing option. Or he does at least for a minute, until he reconsiders. It's based in part on a decades-long friendship founded when he worked at LucasArts, but it's also based on creating something that's an awful lot like Star Wars, but ultimately isn't.

He won't tell me all the details of his plan, but several times he mentions Exploding Kittens — the most successful gaming Kickstarter to date that wrapped up its crowdfunding campaign in February 2015 with $8.7 million from backers. I'm confused. I'm also intrigued.

HappyGiant and Tippett Studio — as in visual effects living legend Phil Tippet, veteran of franchises like Star Wars and Jurassic Park — revealed a Kickstarter campaign for HoloGrid: Monster Battle. The collaborators hope to raise $100,000 in the next 34 days to bring the game to Android and iOS. Stretch goals could bring it to many other platforms.

The game is, in effect, an augmented reality version of the holographic chess game on the Millennium Falcon ... without any actual Star Wars characters. What it has instead are a slew of new monsters courtesy of Tippett Studio, a visual effects company founded by the Academy Award winning designer, creator and animator behind the iconic holographic chess game that first appeared in A New Hope and reappeared in The Force Awakens.

"For years I've been making monsters for directors to play with," Tippett said in a prepared statement coinciding with the Kickstarter's announcement, "and now for the first time, I'm making monsters for you to play with. We're excited about the new fields of augmented and virtual reality, and to be working with our friends at HappyGiant to create HoloGrid: Monster Battle."

I saw HoloGrid: Monster Battle in action. It works. Here's how.

Levine had an iPad sitting on a table. He launched the HoloGrid: Monster Battle app, and the tablet's camera switched on, showing a live video view of the table behind it.

He took a couple of cards — actual, physical cards — and placed them on the table behind the iPad. A moment later, the creatures printed on the cards appeared on the tablet as animated, 3D versions of themselves. So did a playing field that looked like an elongated chess or checkers board. They stood there, ready to do battle. With a few taps on the screen, the monsters began tearing each other apart with furious fists and sparkly magic while hit points expressed in numbers flew out of those taking damage.

This is HoloGrid: Monster Battle's core augmented reality conceit. Players will buy card packs — to be clear: packs of actual cards — and find warriors with names like Steadfast, Warlord and Decimacor printed on the paper within. Each creature will have unique abilities. They fit into recognizable classes, too. There's a spindly little gray guy called Medic, who carries a staff and does exactly what you'd think, for example.

Download the free app and place those cards within view of a tablet's camera, and you've got yourself a game. HoloGrid: Monster Battle's gameplay is something like Hearthstone: Heroes of Warcraft and Magic: The Gathering. Players build decks. When it's time to play, they pick a champion, two minions and two spells. When either side's champion dies, the game is over.

It's a lot like the cards that come with Nintendo 3DS console — except with an actual game attached. You can play it locally with a friend on one device. You can play it online with someone who has cards and hardware, too.

Tippet's studio designs the creatures, and HappyGiant uses photogrammetry — the process of extrapolating 3D data from 2D photographs — to digitize the real-world creatures. If that sounds familiar, it may be because Electronic Arts took many opportunities to talk about its use of photogrammetry to create models for Star Wars Battlefront. Levine's excitement was palpable as he talked about how well this technology is working out for them.

I'd have been more dubious, honestly, if I hadn't seen it right in front of me. Even in the pre-release version, the creatures moving across the board have a familiar design and ways of moving. It made sense when Levine told me that that HappyGiant works closely with Tippett Studio on the animation. 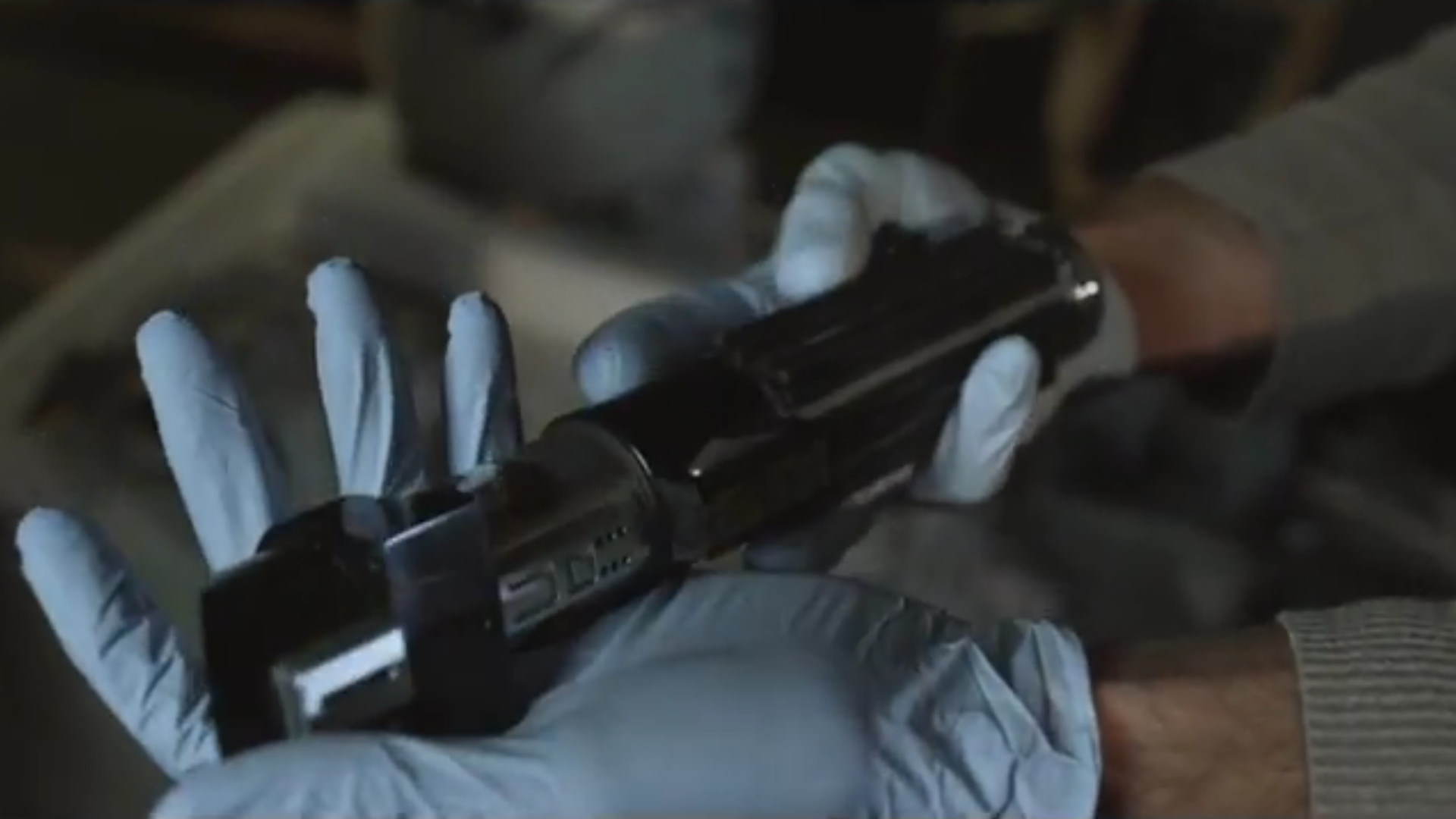 What do Star Wars Battlefront and The Vanishing of Ethan Carter have in common?

It begs to be called Star Wars: HoloChess. But of course, it isn't. Not even on Star Wars Day. But it's darn close, and you don't even have to squint to make it seem so.

It's an impressive demo, though the plan seems malleable — even the Kickstarter says it has "no plans" for in-app purchases, but that leaves open the possibility that players could one day buy digital cards.

Getting the game funded is obviously the first priority, but Levine doesn't shy away from talking about HoloGrid: Monster Battle as a platform that expands. The boards I saw — mostly rectangular, one with circular shades of Star Wars, but even that has a rectangular grid in the middle — a far from final, he said. Also, if funded, the game will ship with a minimum of 12 creatures, but stretch goals could increase that number to 30.

Pretty as HoloGrid: Monster Battle is, the gameplay hook is a large unknown. The creators go into a surprising amount of detail on the Kickstarter page about how you'll play, and it's impressive to see the rules thought out and explained at this early stage. But the best laid plans don't guarantee that it'll be fun to play.

Part of the reason that Mike Levine is making HoloGrid: Monster Battle is because, as he said minutes after we met, he wants to prove that there's a way for small, independent studios like his to find success on app stores, where he says that so much money goes to so few developers. He doesn't like that or the free-to-play business model. That's why he's being bold. That's what his good-natured f-bomb was all about. He wants to make a game and prove a point at the same time.

Levine has obviously considered his options, and he thinks he can carve out a new path. Perhaps he chose strange one. Perhaps he's just open to a bit of interpretation, to changing his mind down the road. Either way, he's placing his bet on an experiment conducted with an old friend.

The game, HoloGrid: Monster Battle, is not Star Wars, but it borrows so heavily from it that whatever success it achieves will almost certainly be tied to the franchise that inspired it. If enough people want pay to get it made, it could come to Mac and Windows and VR and AR platforms, too. That's a bit strange, given that computers aren't set up like tablets, with rear-facing cameras.

Still, it's not of a galaxy far, far away. Why not? Would they like to make a Star Wars version or an expansion, I ask him. He won't quite commit to that.

"Disney isn't the only company that makes Star Wars games," Levine tells me as our PAX East meeting wraps up. I still don't know what that means. But I sure know what that implies.