Death is hard to talk about, but the game doesn't shy away from grief

Share All sharing options for: Fragments of Him offered me catharsis after the shock of losing someone

It's both strange and serendipitous that Fragments of Him, a game that confronts grief head on, arrived not long after Zach died.

Zach and I had been close in high school. I met him when I was 17, and we spent much of our time together steeped in teen misery. We felt as though we had found the one other person who understood how terrible it is to be young and sad.

That mindset was something I soon got tired of, though, as I started getting ready for college. Zach was younger than me and less willing to put aside his anger and loneliness. That's what bonded us, after all: how much we couldn't stand everyone else around us.

But I couldn't live like that anymore. The misanthropy we shared wasn't natural to me anymore, now that I was in college and broadening my perspective. But he didn't see it that way, and so our intense relationship ended not long after it began. We stopped seeing each other, and then we stopped talking to each other. I still found myself thinking about him often, in sometimes unexpected ways.

Then I found out he was gone.

Grief is numbing and exhausting

My grief has taken myriad forms in the four weeks since Zach died. I'm sad for his family, who lost their child at age 21. I'm angry at him for doing this to himself, and at his school and those around him for not offering the help he needed. Sometimes I'm confused about whether it had actually even happened. Sometimes I hate myself for not doing something to stop it.

Mostly I've just stopped feeling anything at all, numbed and exhausted by the weight of losing someone I cared about.

But I've kept these feelings hidden. I went to work the day after I found out Zach died, keeping myself distracted and away from what was waiting at the back of my mind. Some mixture of guilt, sadness and anger threatened to bubble up as I pretended nothing was wrong, but I always clamped it down. I threw myself into whatever I could to make sure I never had the time to confront the impending emotional eruption.

I've largely refused to address these emotions head on. When I do talk about it, it's in the most impersonal terms. "It's tragic," I've said to friends who've reached out. "I can send you the article about it, if you want," I told others who wanted to know more. When asked how I was handling his death, I deferred; that was unimportant, I said, and I couldn't properly define how I was feeling, anyway. What I really wanted was to shift the focus away from me, refusing to tap into the "why" behind my recurring panic attacks, nightmares and crying episodes.

Fragments of Him, on the other hand, is a narrative-driven game completely focused on the grief I fought hard to ignore. That's what turned me onto the game in the first place, a few weeks before Zach died, back when I rarely thought about him. 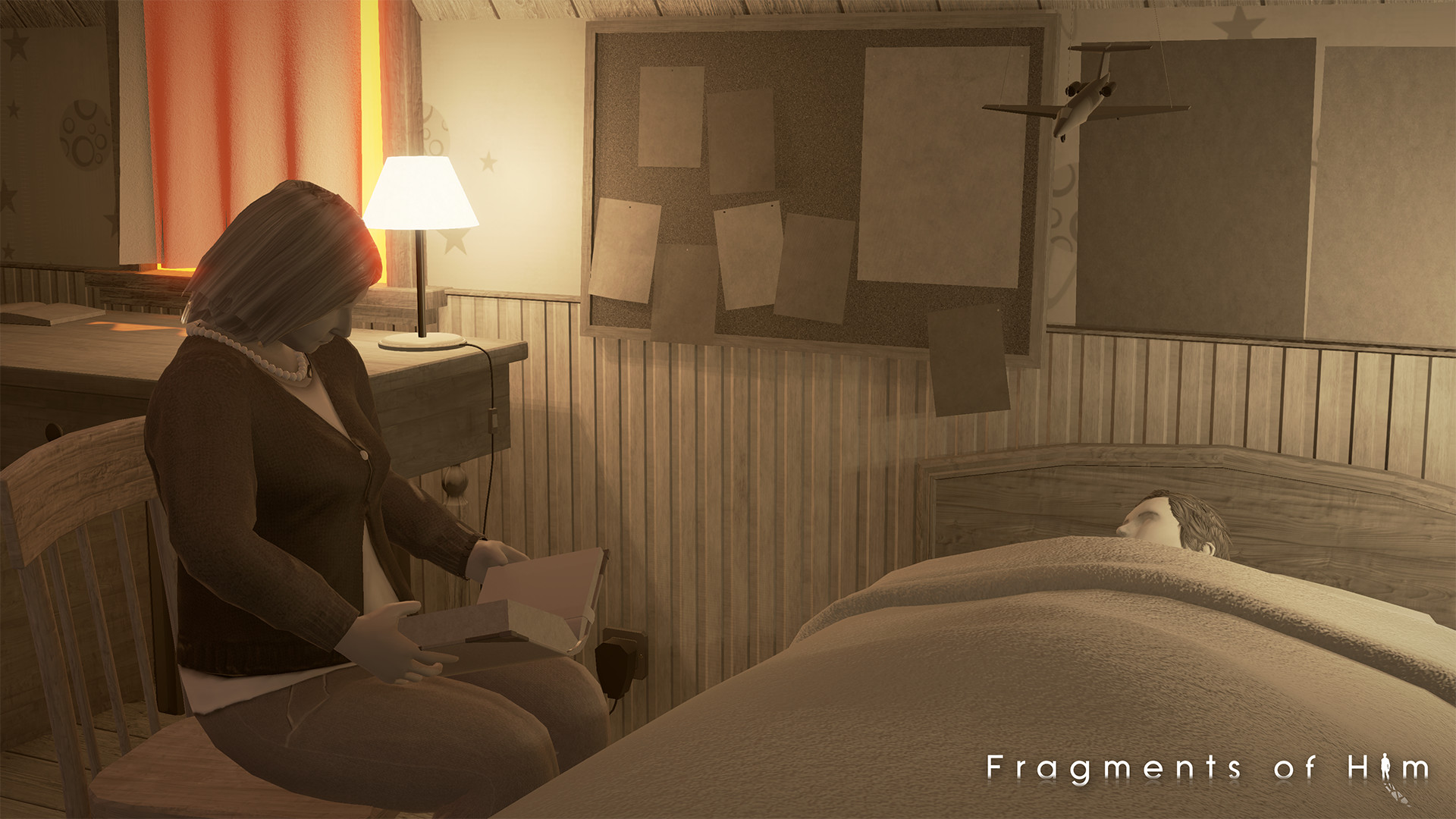 Fragments of Him is an astonishing story of love and loss

The game focuses on Will, who dies suddenly in a collision, and three people who loved him. All three are defined by their connection to Will, whose death occurs in the first scene: There's Sarah, his ex-girlfriend; Harry, his partner at time of his death; and Mary, his grandmother.

I was in a completely different emotional space by the time I actually got my hands on the game, though. Playing through the short, dramatic game just weeks after Zach's death had a powerful effect on me. The game embraces how exhausting and evolving grief can be. It removes any shame from talking about death through the lenses of those left behind.

Fragments of Him is defined by vulnerability

Vulnerability is what defines Fragments of Him's mannequin-like cast. The ease with which each character looks back at the moments they shared with Will, some painful, some unflattering, astonished me, even in my guarded state. As Sarah, Mary and Harry recounted their histories with Will, my throat began to close up and my breathing got heavy. I knew those feelings they talked about, I thought as I sat alone in the dark, watching the stories unfold. I knew the guilt and the anger and the complete confusion each character claimed to experience — they were what I was shying away from on a daily basis.

The characters all revisit their pasts in unique ways, going in-depth during certain recollections, speaking in vague terms in others. The memories that Sarah or Mary want to relive, for example, they do so vividly. Harry's storyline, on the other hand, is completely impressionistic, while the women's are more linear. Throughout them all, the player walks with them side by side, ear pressed up against their crumbling walls of defense.

But it scares me to imagine being that open; I've long been an intensely private person. For much of the game, playing as people who expose their personal thoughts felt uncomfortable, because I so rarely reveal mine.

The sticking power of Fragments of Him is that it removes any walls from the characters — and the player — affording space to come to terms with grief. Death leads to hurt and sadness, and those feelings are hard to vocalize. Talking about them, though, can make you stronger.

That's the thing, I realized as I played through this slow-paced, emotional story: Talking about grief is fragile and scary. But the point of the game, I think, is that facing this fear is healing.

Fragments of Him never shies away from addressing how death affects you, how it sends you hurtling backward into your past to identify what went wrong, to think about what you could have, should have, done differently. How you feel like this could have been prevented if you'd just stuck by them, or made a different choice.

I still don't feel comfortable opening up about the mess of emotion I contend with daily since Zach died. But that's okay, too; Fragments of Him shows that mourning can take different forms. Sarah's story is melodramatic, Mary's is tinged with anger and Harry's is completely melancholic and introspective. There's no one "right" way to express your grief.

What Fragments of Him most helped me with was offering catharsis, extracting my emotions from where I'd buried them. I cried as I played through it, at first resisting tears and then becoming overwhelmed by them. I recognized the character's pains from points of sympathy and empathy, too. All at once, I was admitting to myself that I was still mourning, and that maybe I wasn't completely fine yet. It takes a long time to get back to "OK," I think. Acknowledging that feels like a big first step.

Fragments of Him tells an affecting story of one of life's most difficult, unavoidable experiences. It's one that will gut you, even if you don't have intimate familiarity with what the characters are going through. I didn't expect that I'd be playing the game from such a close place of understanding, myself; I certainly hoped I wouldn't.

When I finished it, I stared straight ahead at the screen. Here I am, on the other side of one of the first shocking losses of my adult life, I thought. And I'm so thankful that Fragments of Him is coming into my life right now, inviting me into that hug I'm too afraid to ask for out loud.