Your living room is being invaded by computers. I don’t mean in an internet-of-things way; that war is over. I mean real computers. Gaming-capable computers. Steam boxes and other small form-factor PCs are more affordable than ever, and even Microsoft will be bringing mouse and keyboard functionality to the Xbox One.

But is it really practical to try and use WASD and a claw grip while hunched over the coffee table? No. What you need is a lapboard.

And not the anemic little thing with the touchpad from the conference room at work. You need something better. Something bigger.

We ordered up samples of the latest wired lapboards from two gaming peripheral heavyweights, Corsair and Roccat. We spent a month using them. Here’s how they stack up. 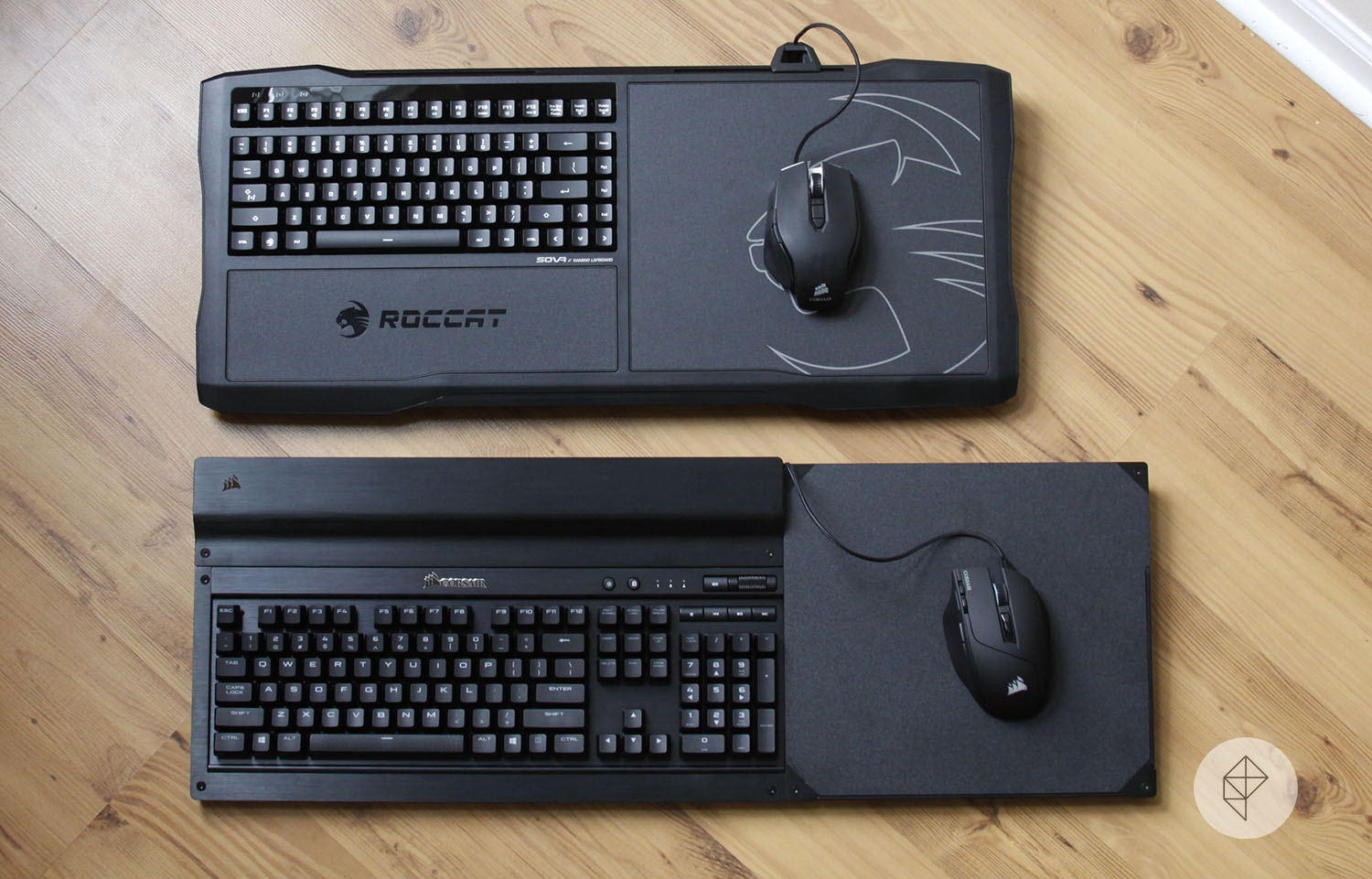 Pictured above is the Roccat Sova, which goes on sale Aug. 31, and below it the Corsair Lapdog, available in limited quantities right now. Online, they both look, and frankly sound, pretty much the same. But once you get them both out of the box, the differences are immediately clear.

The Lapdog is huge. Not just wider — at nearly 29 inches compared to the Sova’s 25.25 inches — but thicker as well. That’s because the Lapdog comes with a detachable memory foam pillow, shown here upside down. It’s optional, and just about doubles the overall thickness of the device. 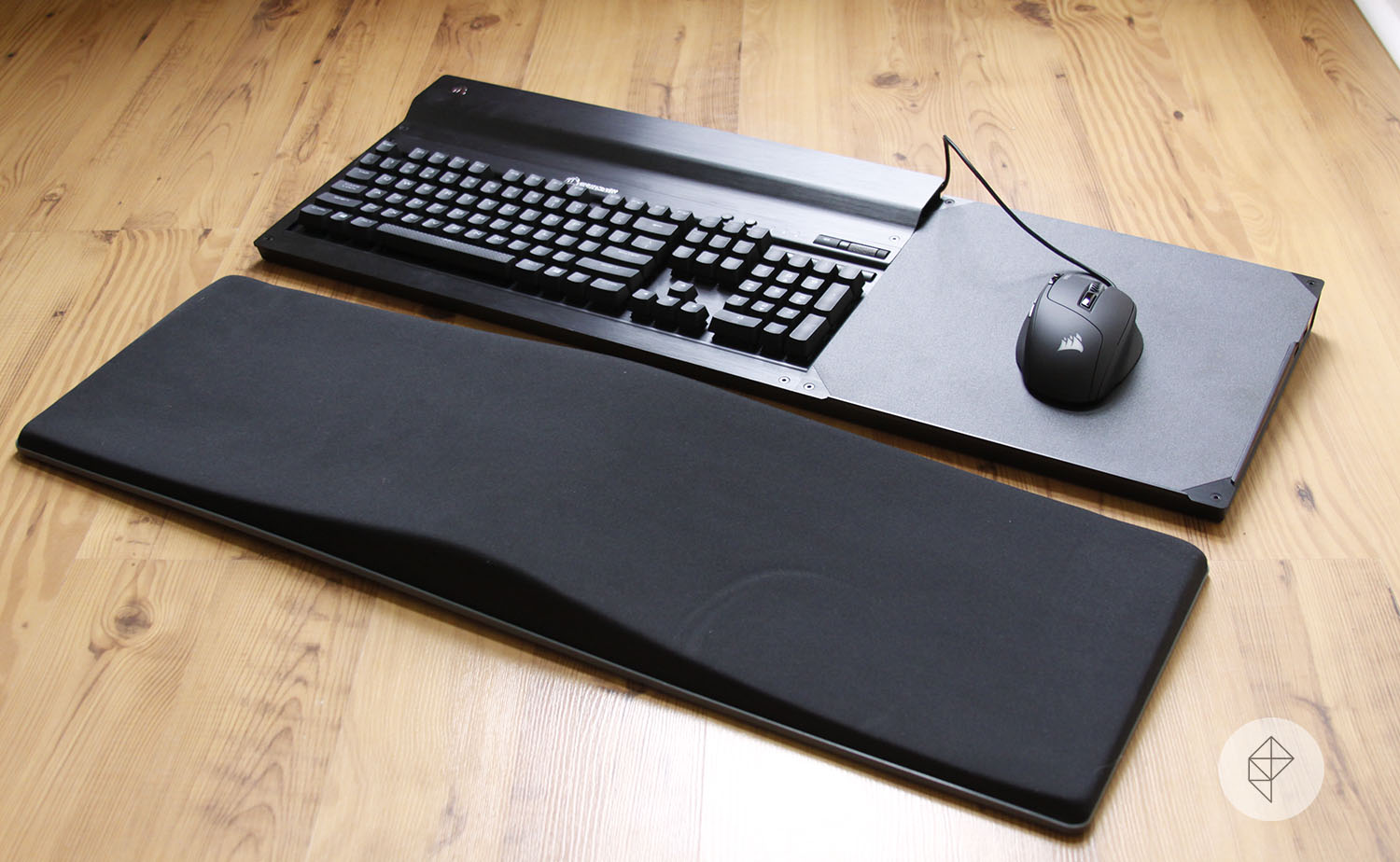 I had quite a few problems with the pillow. First off, it secures to the bottom of the Lapdog with a series of magnets. Those magnets aren’t glued onto the Lapdog well, and all six of them fell out during my demo of the product. I guess you could glue them back in, but you shouldn't have to.

Once it’s sitting on your lap it feels robust, but when you pick it up with the pillow on, it’s a bit tricky to keep them both connected — even before the magnets fall off. I knocked the pillow off quite a few times while standing up.

But the worst part about the pillow is the hump in the middle. It sits right between your legs, which puts the lapboard into a position that’s acceptable for WASD-and-mouse use but very uncomfortable for general typing. I ended up putting it aside almost immediately, and I can report that the Lapdog works just as well without it.

What makes the Lapdog unique is that it’s not a custom keyboard per se. It’s actually an aluminum and plastic shell made to fit Corsair’s popular K70 keyboard — which happens to be my gaming keyboard of choice.

There’s even a little panel included to allow fans of the tenkeyless Corsair K65 to slip that inside instead.

Above the keyboard itself is an aluminum panel that reveals a wide, deep channel for all of those thick Corsair cables. Included are a few zip ties to make sense of things, and it all fits. But I found it strange that Corsair chose to house the cables on top rather than below the keyboard, where that cover could have doubled as an ergonomic wrist rest.

Underneath the mousepad is where a powered USB 3.0 hub lives. There are two ports inside the Lapdog, one each for the mouse and keyboard, and four others on the outside — two on the front and two on the right side. That means you can plug in a USB headset and still have three ports left open. 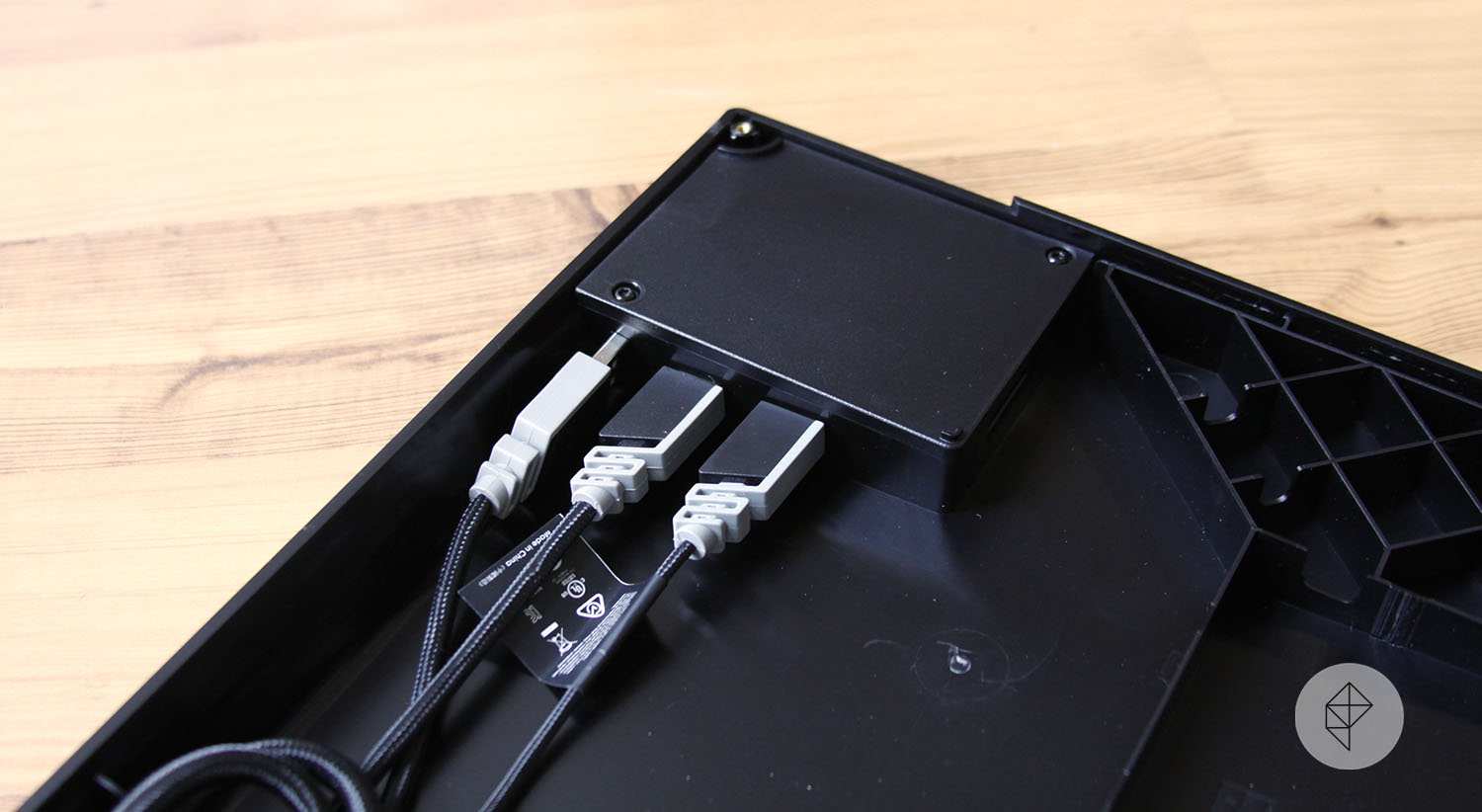 But since it’s powered, you need a separate power supply, which has to snake its way across the room from your computer.

At 16 feet long, the Lapdog’s included cabling is more than enough to get you where you need to go. But with that power supply, it begins to look a little kludgey. Given its rigidity, the cord is also hard to store when not in use.

While storage was a big problem for both the gaming lapboards I tested, it was much more of an issue for the Lapdog because there’s really no elegant solution to keep your mouse safe.

You can lay the Lapdog flat if you have the room, so long as you take the pillowed base off. (The hump in the middle turns it into a teeter-totter, and the weak magnets threaten to send the aluminum business on top sliding onto the floor.) But if you tip it up on its side, like behind your couch or against the wall below your TV, the mouse just sorta dangles there, kept in place by a zip tie deep inside the housing. Eventually you’ll damage that braided cord, but long before that happens you’ll likely just smack the mouse into the wall — or the Lapdog itself — and it’ll stop working.

In the end, while I still love the K70 itself, I have serious issues with the Lapdog. It’s just too big, the pillow is functionally useless, and it uses its cavernous insides to prioritize cable storage over ergonomics.

For my money, I’d go with the Sova instead. Here’s why. 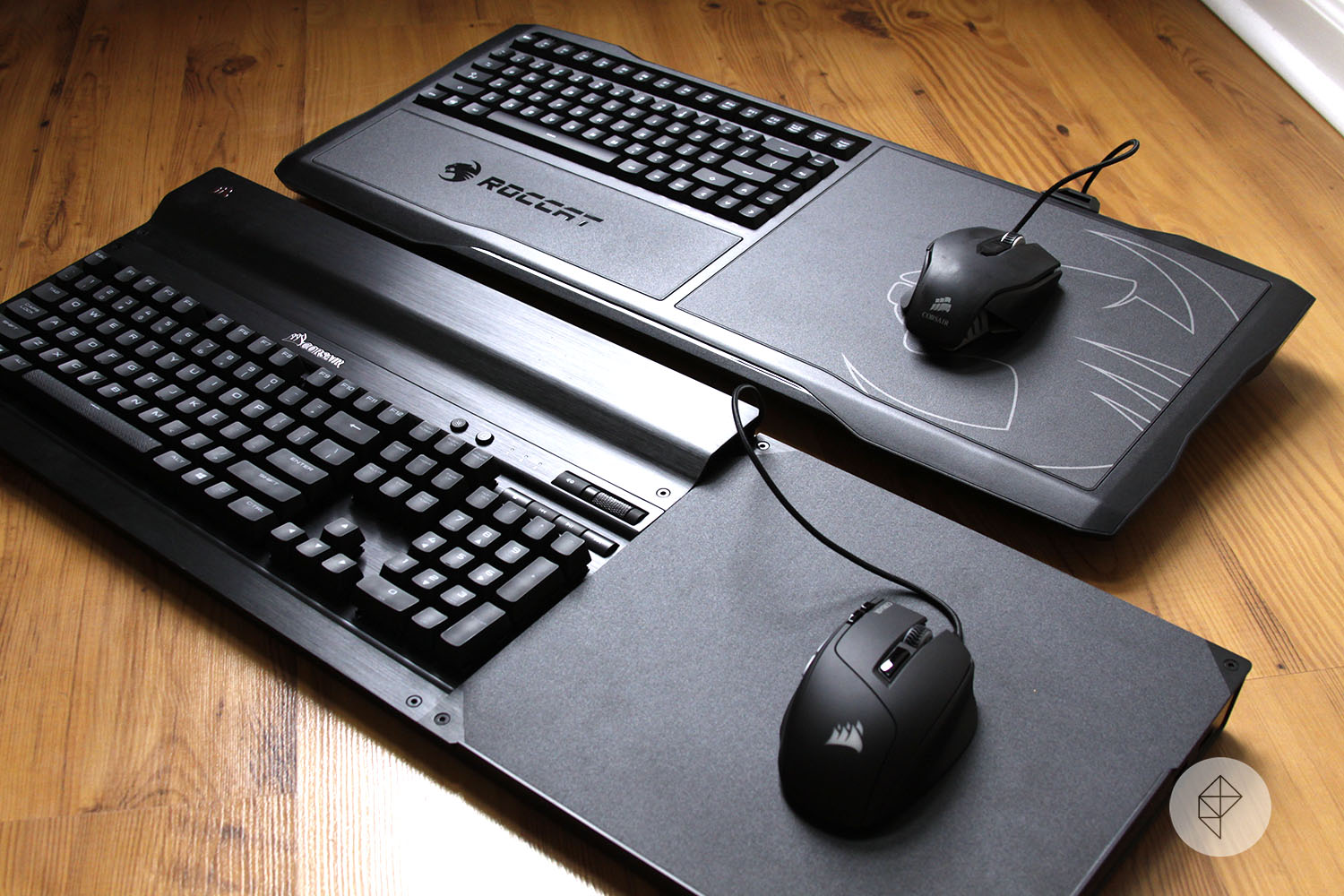 A lesson in compromise

While the Lapdog is basically a big metal box, Roccat’s Sova has much more elegant lines. But it’s almost entirely plastic, so the claims of it being "indestructible" made on its website are pretty disingenuous. I could break the thing over my knee without doing myself much damage.

However, where the Lapdog is bulky, the Sova is slim. Instead of a giant, useless pillow on the bottom, there are just four discrete, easily removable pads. That means that with the front two pads off, you can angle the keyboard down and away from yourself. Combined with a generous wrist rest — more than half the height of the keyboard itself — it’s an ideal configuration for comfortable typing. 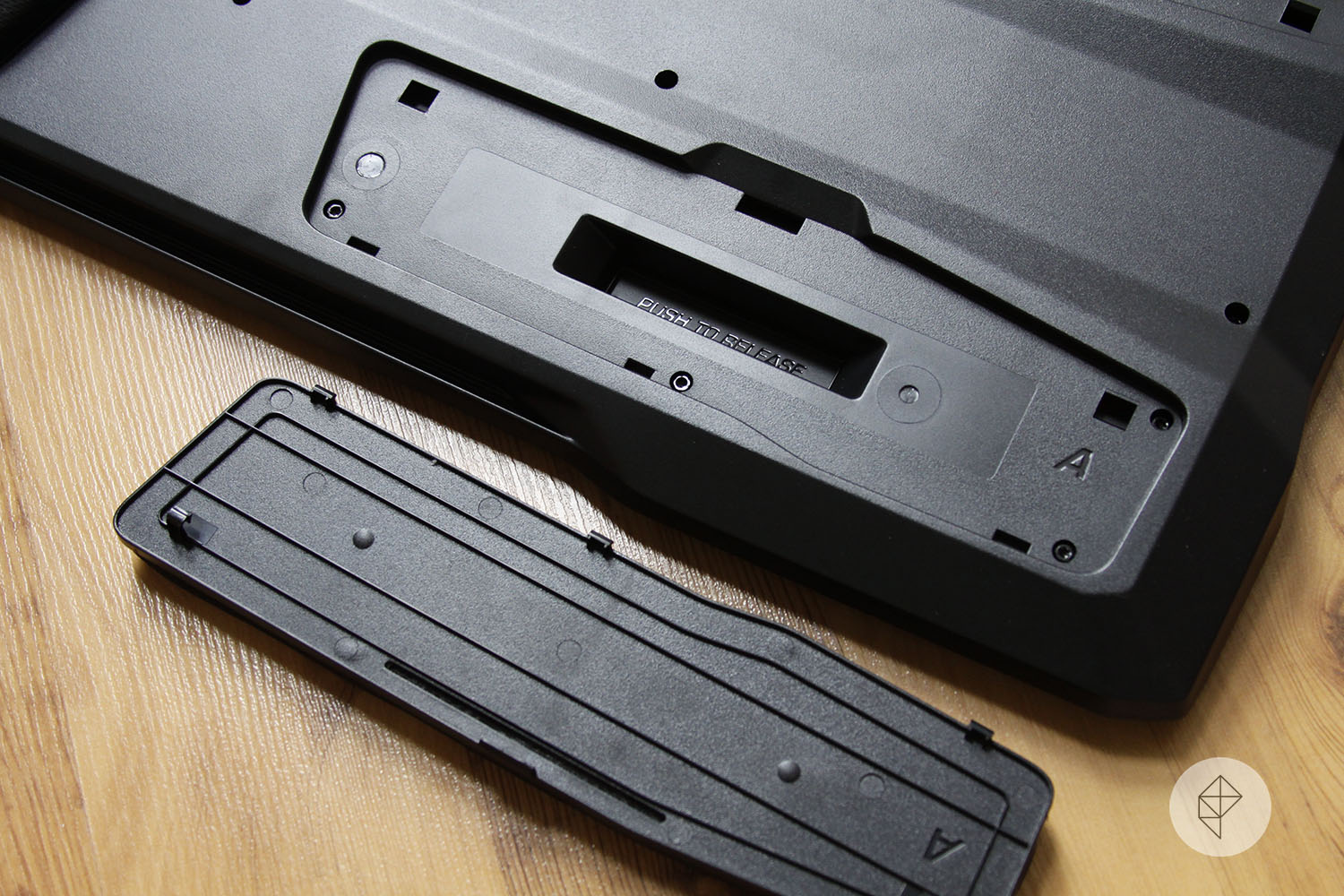 The Sova is also completely toolless. All you need to pop off the wrist plate and the mousepad are human fingers, rather than the Allen wrench that comes along with the Lapdog. Sova has promised customizable options to add a splash of color or a logo to your board, but right now details are scarce. 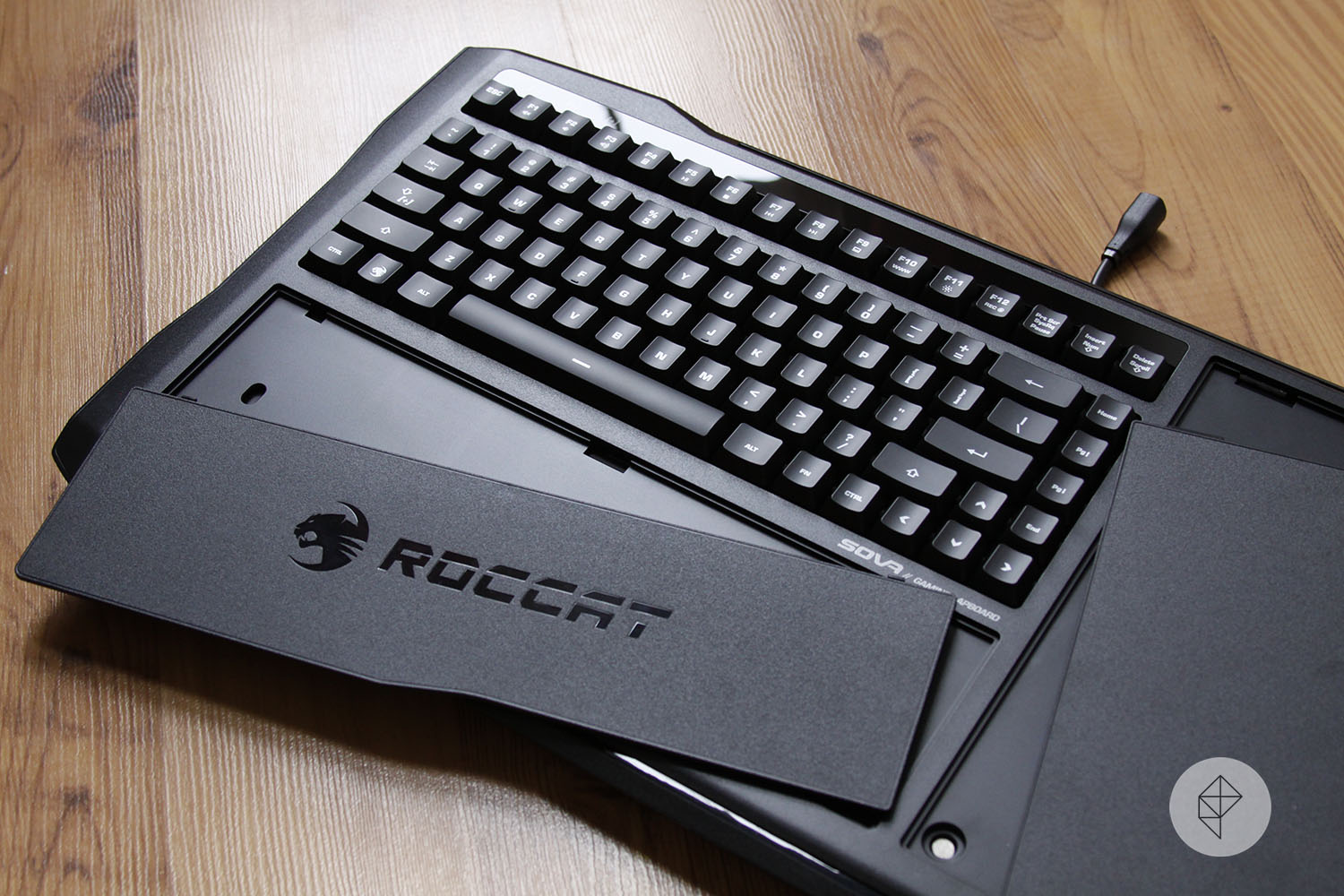 Roccat has taken care to give plenty of options for protecting your cable connectors. On the front of the Sova itself is an integral, breakaway connection not unlike that found on a wired Xbox controller. It’s great piece of mind knowing that if someone walks by and stumbles over the included 13-foot cable, you’re less likely to need a new board from a broken connector.

And while the Sova only has two USB 2.0 connectors on the front, at least you don’t need an additional power supply to keep the lights on. There’s also a little grommet to hook into in front of each one, which will put the strain of a bump onto the cable jacket rather than the USB port itself. 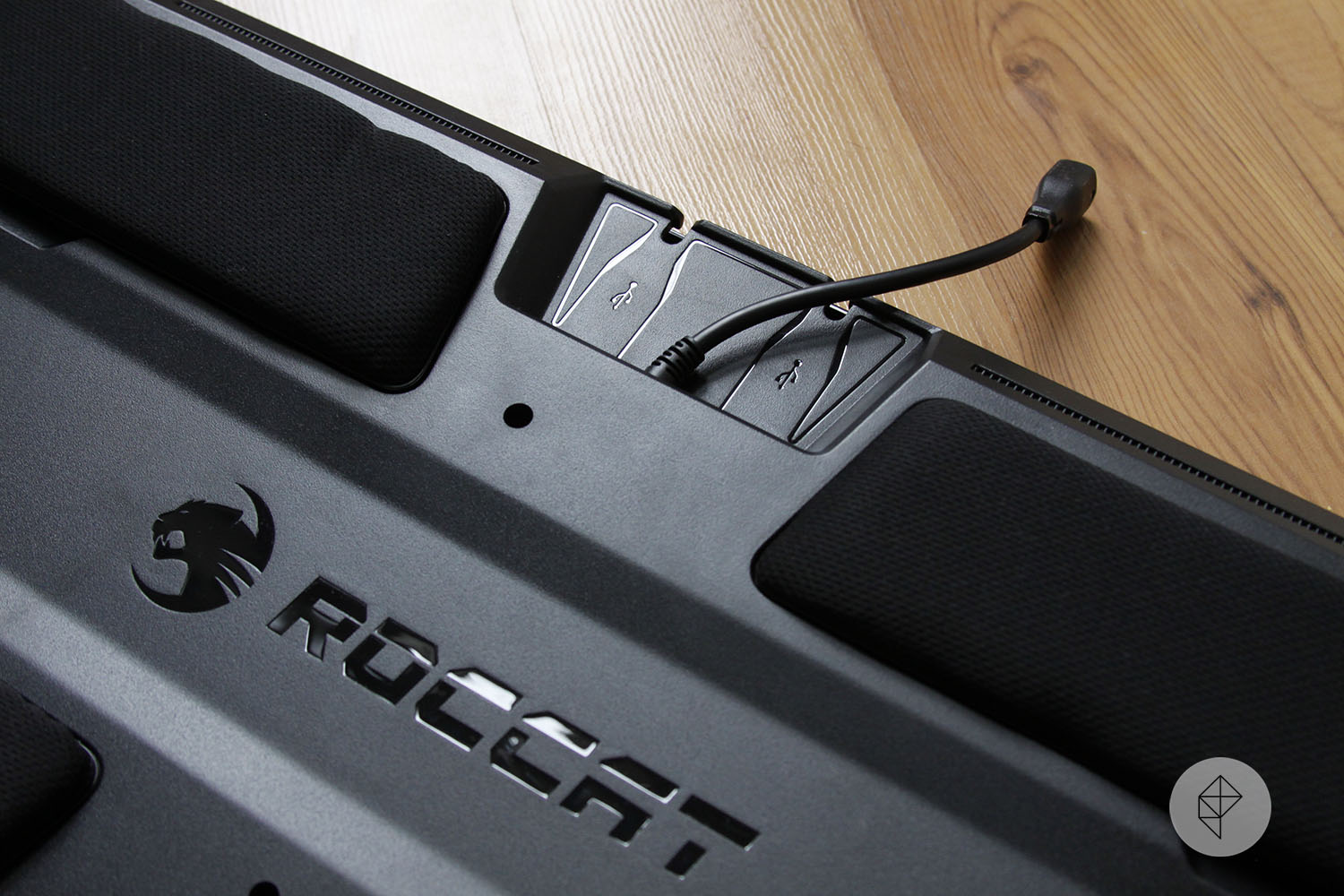 Another perk of the Roccat is the accessory track that runs nearly the entire length of the front of the board. 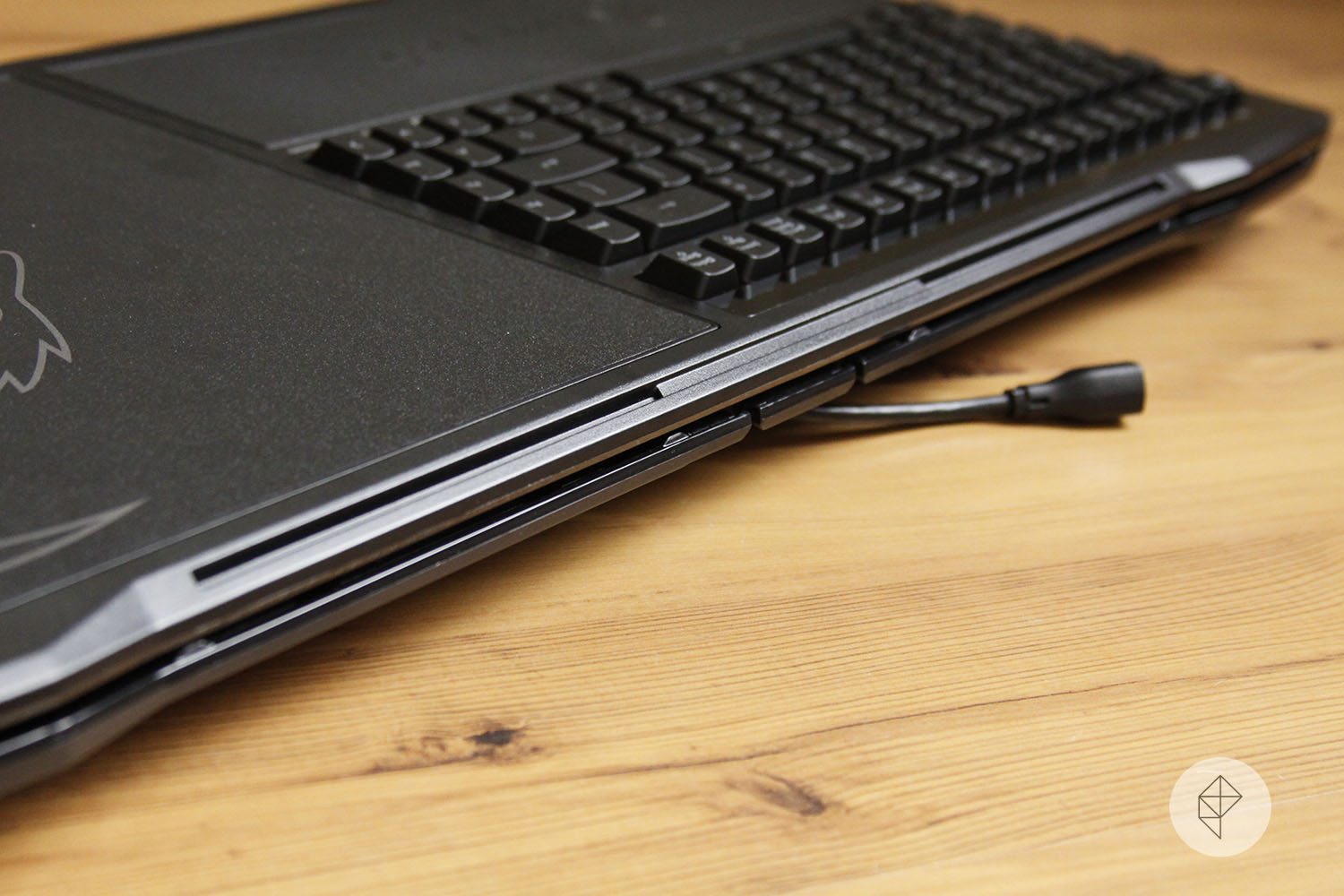 The Sova comes with one such doodad out of the box, a clever little widget for securing your mouse. You can move it side to side along the track with a positive click and it’s rock-solid, both in how it mounts to the board and in the death grip it has on your mouse cable. The channel along the front is also deep enough for you to stash the extra length of your mouse cable inside, so there's no loops hanging around to get caught on things.

Best of all, if you want you can disconnect your expensive mouse when you put the board aside for the evening. No precarious dangling required. In Roccat's marketing material, the company says a clip-on smartphone holder is also on its way. 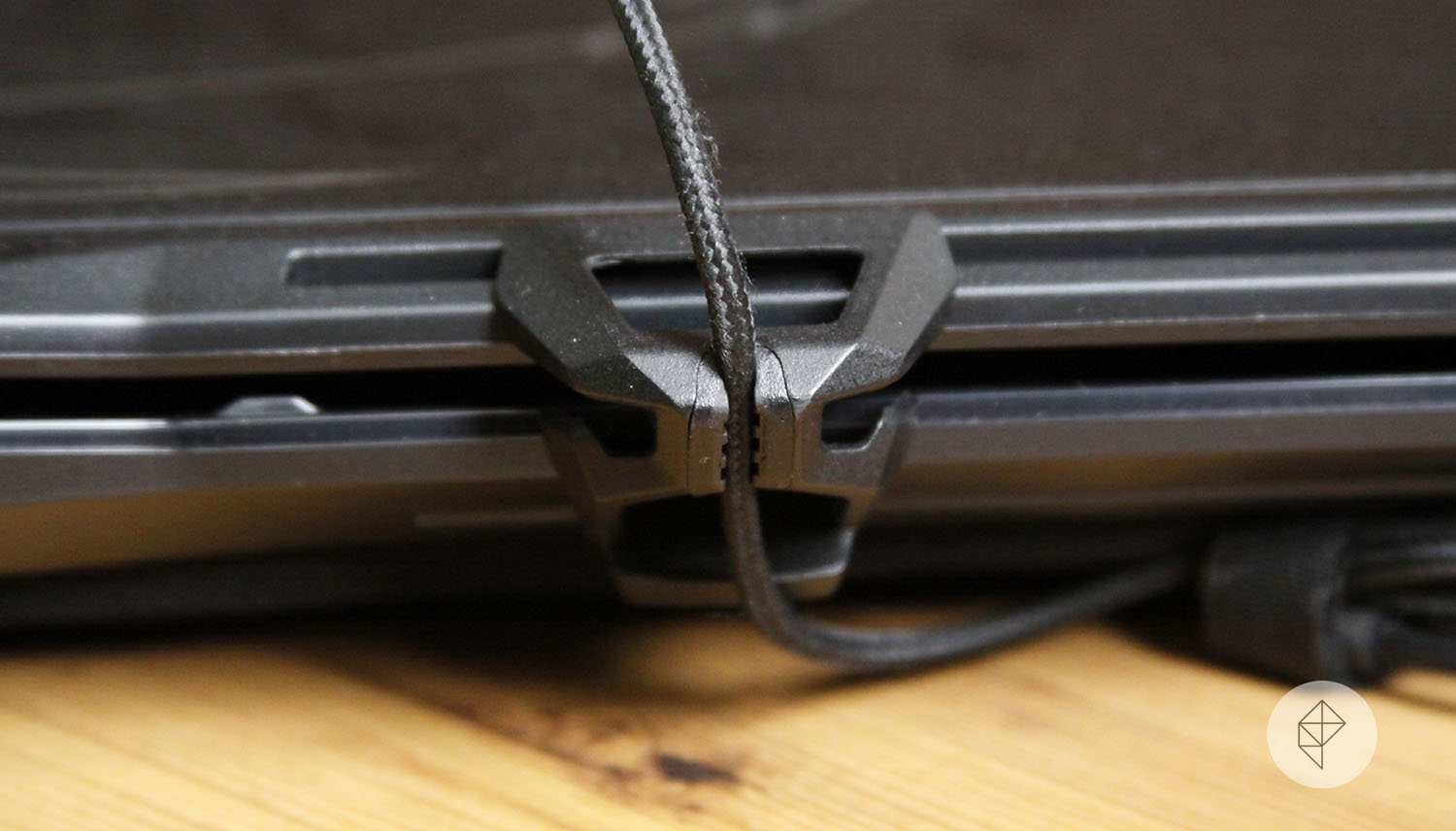 Where the compromise comes in is that the Sova doesn’t use Cherry keyswitches. There are two versions, one with rubber domes and another with Trantek Electronics Co. (TTC) switches. I’ve not had direct experience with TTC switches at all, and the pre-production demo Roccat sent out had rubber domes. But at a savings of up to $100 over the Lapdog, it’s certainly an option to consider.

The Lapdog is available in three configurations. For $119 you get the case itself, or for $249 you can have your choice of a bundle with a K65 RGB or a K70 in blue. Mice are sold separately.

The Sova will be available Aug. 31 in two configurations. For $199 you get the Sova with mechanical switches, and for $149 you can have a Sova with rubber domes. Both come with a black Kova mouse.

Is a lapboard the best option for gaming? No. Not by a long shot. But if you’re looking at doing some PC gaming in a dorm room or a small apartment, both the Lapdog and the Sova have a lot going for them.

My recommendation is, unless you already own a Corsair keyboard or absolutely must have Cherry switches, go with the Sova. But do you really want to spend between $120 and $250 on a keyboard and mouse? That’s up to you.

Make sure you check out our Razer Turret impressions right here.