TIME Stories is the game you play over and over again, until you can’t anymore

That’s why they also made three completely different sequels

Share All sharing options for: TIME Stories is the game you play over and over again, until you can’t anymore

My first session of TIME Stories, one of 2015’s most highly-rated board games, took around three hours to finish. And by finish, I mean lose. To actually win the game — to actually achieve its cryptic goal — could take me another three or four hours more. So is this critically-acclaimed adventure game actually worth that much time at the table?

In the fiction of TIME Stories, "TIME" is an acronym for Tachyon Insertion in Major Events. For the layman, that means time travel.

Once time travel technology was discovered it changed everything. Things started to go pretty well for humanity for a while, up until the point it discovered the multiverse and how it had messed it up. In crisis, the governments of the world came together and determined that the only way to protect the multiverse was to police all those newly discovered — and nearly infinite — timelines for anomalies and aberrations.

Players take on the role of novice Temporal Agents and, suffice it to say, there’s plenty of work to go around.

Each game begins in the TIME Agency base, where your irascible boss Bob reads you in on the timeline you’ll be interfering with. Then the players at the table decide which of the people involved in the incident they’ll physically inhabit. While players retain their own identity at the table, there is some light role-playing required. Personality traits, mental and physical afflictions all influence a player’s capabilities and choosing the right mix of skills can be the key to victory.

What drives the game, and what caused it to be ranked so highly in both the recent Spiel Des Jahres game of the year competition and the 2015 Golden Geek Awards, is the novel way that game reveals itself to players.

When your campaign is finished, you can put everything back in order thanks to tiny numbers on the back of every card.

Each campaign in TIME Stories is composed of a stack of large cards, about the size of a Tarot deck. The order of the cards is tremendously important. On top is the mission briefing from Bob. There’s also a stack of items, some cards to be read when you meet certain victory and loss conditions and a four-card map for the players to explore.

Below that are individual stacks of cards for each location on the map, and these must be kept secret.

Each turn players can spend their Time Units to move between locations on the map. Thumbing through the location deck, you can find along the edge the cards the names of major locations. Once you come across the right one, you lay out up to seven cards from the stack. The action zooms in to that location, and players move large wooden pawns from card to card as they investigate the scene. 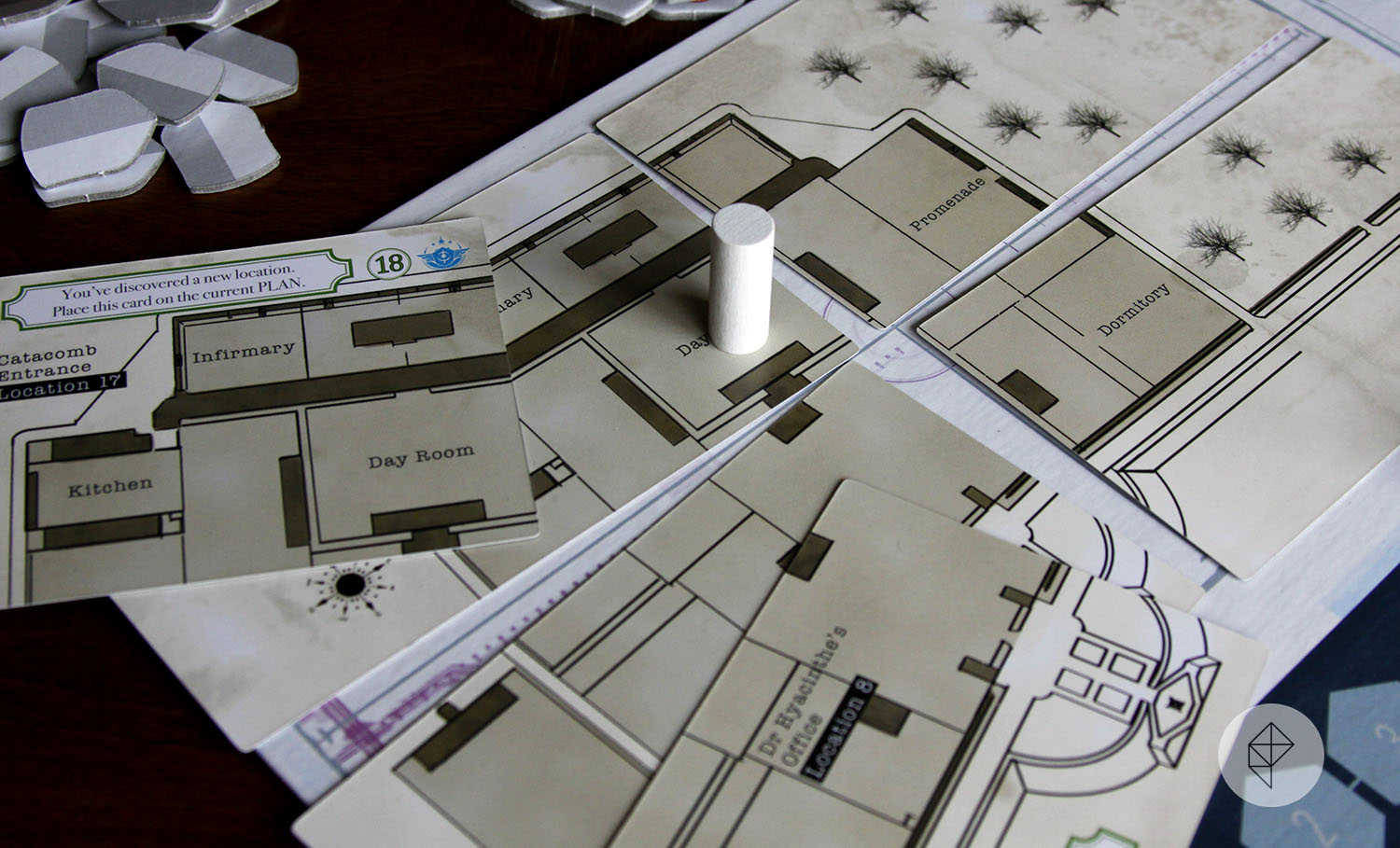 Some items and carry over from game to game, traveling with players through time and space. So does the knowledge of secret locations you've previously revealed.

On the other side of those cards could be anything. A physical challenge, a riddle or a secret door or a planar gateway. Additional parts of a location can even be hidden behind certain objectives, which take the form of colored State Tokens that players collect as they play the game.

Pick up the key in one location? Then take the blue keycard — the blue State Token — and add it to your inventory, allowing you to reveal extra parts of another location later in the game.

But should you fail in your "run" through a campaign — failure can come from death or running out of Time Units before you reach your objective — you have to play the campaign over from the beginning.

In the fiction of the game, this is the TIME Agency using scarce resources and huge amounts of money to smash your consciousness through the Tachyon Insertion device again. But in real life it can be just as painful, because you have to spend another two or three hours at the table doing a lot of the same things over again until you reach new content.

For Polygon’s first playthrough, I acted as the game master and taught the other players at the table what the mechanics were as we went. It helped to speed the game up considerably, but still it took quite a while for us to lose.

While not everyone was super eager for a second playthrough, most had a great time. Like Pandemic: Legacy, this is another tabletop game with tons of spoilers and it was fascinating to watch it delight and surprise people in unexpected ways.

TIME Stories has the single best packing system I've ever seen, especially useful for pausing longer sessions. This is how we left our game before I got on a flight from New York to Chicago. Nothing moved.

Late in the game our engagement editor Jeff Ramos was caught by surprise when he drew a card that over-layed the game map that we’d been working with for nearly two hours.

"We all audibly gasped since we didn’t even know that was possible," Ramos said. "Earlier in the game I spent time and energy on a locked door only to walk away with a stupid plunger. I complained about it the whole time until finally it became useful hours later!"

Our entertainment editor Susana Polo also pointed out how great TIME Stories would be great for a regular gaming group, especially one trying to move away from classic European-style strategy games and into something more thematic. But it’s not so heavy on the role-play that you have to have to same people there every week.

"The monthly board game group I attend is always trying to come up with ways to incorporate some sort of pen-and-paper role-play game into an event without consistent attendance and even fewer experienced GMs," Polo said. "TIME Stories is something I can see scratching that itch for us. In fact, I can see us house ruling a variant where one of our resident GMs role-plays all the non-player characters right along with us roleplaying as our characters."

Other than the amount of time required to finish a campaign, the game does have a known issue with replayability. Basically, there isn’t any. 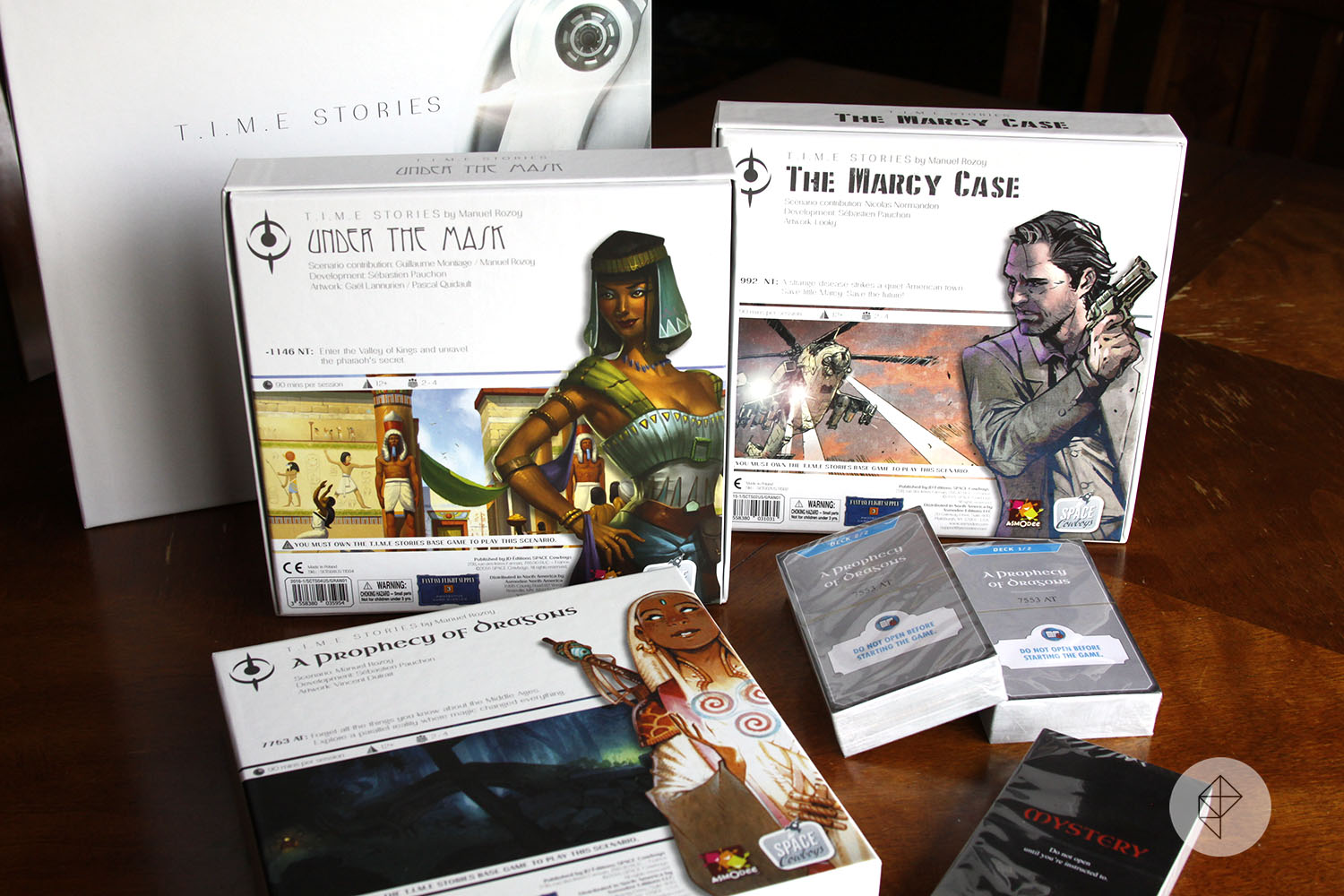 Once you’ve unlocked the riddles and found the optimal path through the deck of cards there’s little reason to go back and do it all over again. Off the shelf, TIME Stories retails for $70, although we’ve seen it for as little as $42 online. That gets you between four and six hours of gameplay, tops.

Each add-on campaign will run you between $25 and $30 for another four to six hours of play.

But what’s interesting about these add-ons is that they’re completely different from what comes in the core box. Different time periods, different artists, different maps and characters. Buying into TIME Stories is sort of like buying into a light role-playing game system and being able to port it to different scenarios like ancient Egypt, or fantasy Europe. There’s even a thriller set in the exotic and far-off 1990s.

After playing, I had mixed feelings myself about TIME Stories. I was actually a little worried for that first playthrough with my coworkers. But they simply ate the game up. It’s hard not to recommend it, but you’ve got to have the right group of players at the table. And be sure you’re making them aware that it might be a bit more of a time commitment — and at times a bit more redundant — than board games they might have played before.

For more tabletop coverage, check out our dedicated section here.