Chambara can be one deceptive game. It consists solely of multiplayer duels and a one-hit kill system across just nine levels. It might seem simplistic, but there's a lot of depth hiding in the shadows. And that's just what you'll need to do to really dominate, too, because Chambara equally values both stealth and twitch action skills. 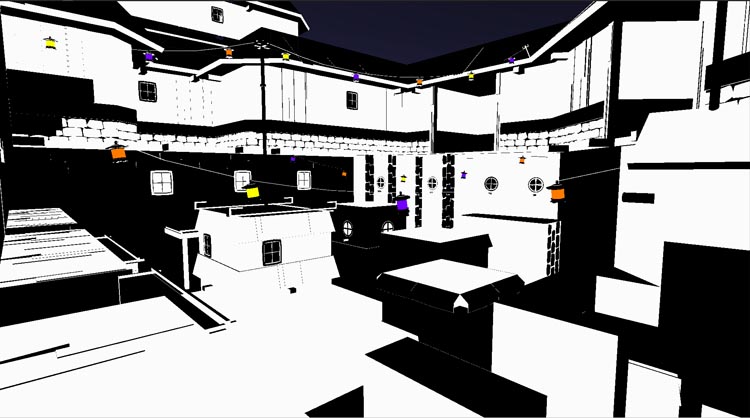 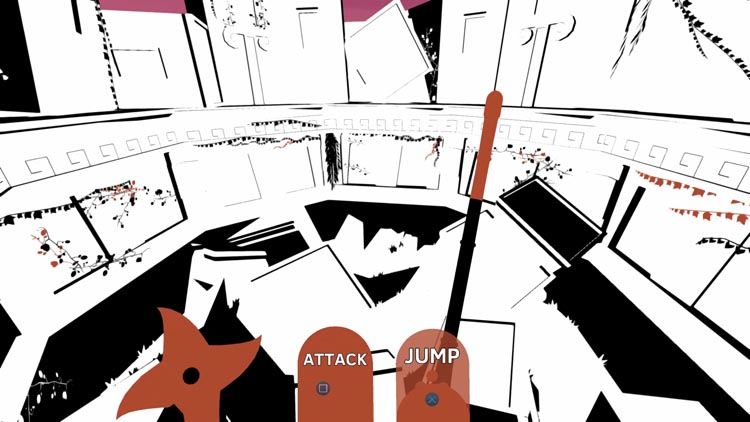 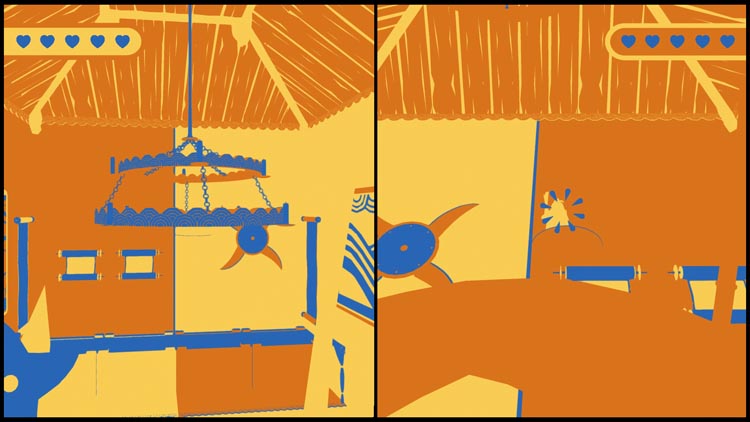 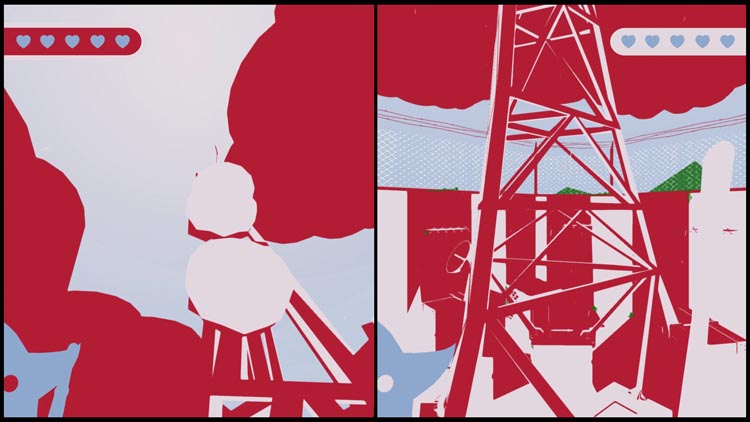 Master the art of jumping 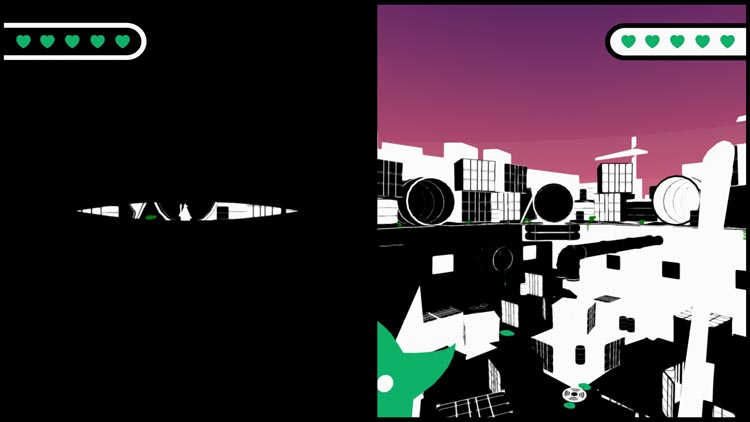 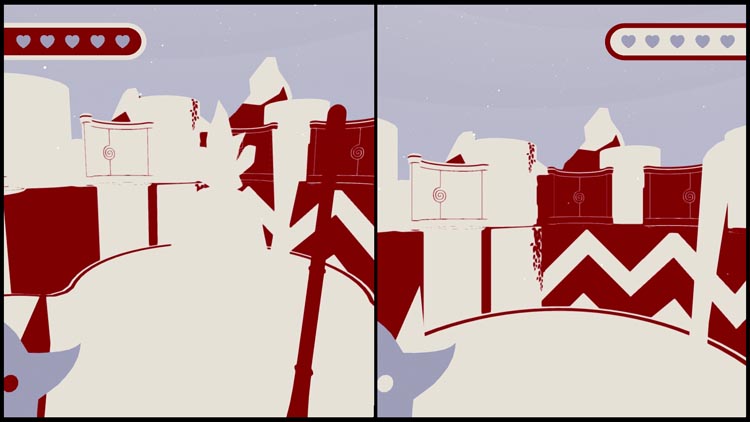 Become one with the background

It's important to know what's going on at all times, and Chambara's art style can be disorienting. Give the training mode a go with all five color schemes. It will help you get used to the aesthetic, the flow of combat. Then it's time to move on to Chambara's fundamentals.

There's only one basic gametype in Chambara, and that's deathmatch. To win, you'll need to whittle down an opponent's five hearts, while keeping your skin intact. After each kill, your enemy will float back to a spawn point, and the round instantly begins anew.

Your basic options include the melee attack button, a charge attack and a shuriken projectile, all of which we'll discuss. 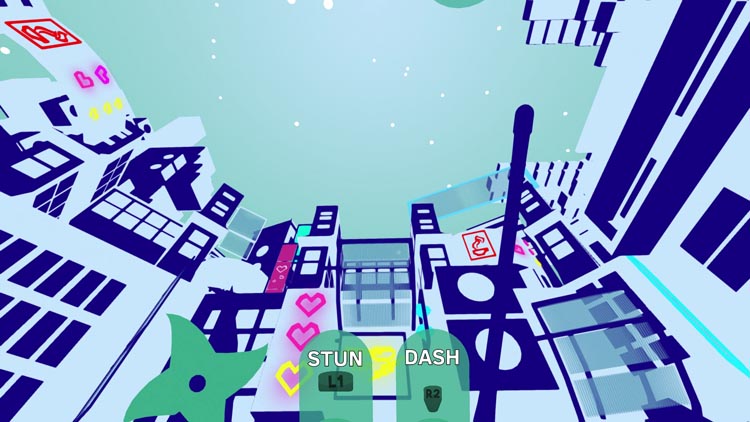 Your character really doesn't have a whole lot of defensive options outside of your wits. You can turn 180 degrees with the triangle button, which we recommend doing every so often to prevent a sneak attack. You can also close your eyes to hide your screen, which we discuss in (its own section below).

Although it seems innocuous at first, the shuriken can be your key to victory.

By pressing L1, you can cue up the attack animation, which brings up a little aiming reticle. Throwing it at an opponent will stun them for several seconds, but you'll unfortunately have to retrieve the star before you can use it again. It helps that it's an obvious color, so it won't get lost.

Make sure you're using the star often. Even if it's just to throw someone off, it's better that you spend each of your precious lives expending the star, trying to make a play.

Alternatively, before proceeding into an area, use throwing stars to check to see if an enemy is present. This is especially useful when your throwing star blends in with a particular background.

Finally, you can also use throwing stars to mark areas like a player spawn point, so you know where to check after taking someone out.

Master the art of jumping

You'd think you were playing Mega Man X with all of the aerial maneuvers that are possible. Always stay near walls so you can get the best height possible with wall jumps.

Try each arena out in training mode to get a grasp on the layout. The first thing you want to test are the boundaries of every stage, most notably the vertical boundaries. In other words, find out how how high you can get.

Specific examples include the Radio Tower (pictured above). Notice how you can't really get above the fence, but if you cling to the wall that surrounds the perimeter, you can shimmy along the side. It's also very hard to do, but you can land on the individual frames within the tower. And if you're high enough and the correct color (more on that below), you'll blend in with the sky.

Do this by dash-jumping off of a wall to get the best possible height. In other words, use the X button to jump, then press X again to bound off a wall, then press R2 and release to trigger your charge attack. You can use this ability to rush an enemy and strike them down or as a good, old-fashioned air dash.

The developers of Chambara have cleverly implemented a mechanic to combat screen-watching, but it ends up becoming a much deeper mechanic than it seems at first glance.

To manipulate your character's eyes, simply pull the L2 trigger. (You can use circle as well, but we recommend L2, so you're prepared to easily press other buttons.)

You can pull trigger in as far as possible to completely obscure your vision, or barely pull it in to squint slightly. You can actually get involved in a meta-game of sorts, where you watch your opponent with your peripheral vision. When they look over at your screen, pull the trigger all the way to close your eyes completely. Slowly reopen them and continue on as normal, repeating the process as necessary.

Alternatively, you can also just keep your eyes open slightly at all times. With enough level study in training mode on every color scheme, it's easy to figure out where an opponent is in relation to the current view on their screen. Yes, what was once a shameful occurrence in the retro era is now a legitimate tactic.

Become one with the background

Seeing is half the battle in Chambara. It isn't just an action-oriented game that involves sword clashes and fancy footwork. It's also a stealth game where you can heavily benefit if your foe doesn't seen you coming.

See the screenshot above? The white object on the left side is actually a player character. Look closely, and you can see the outline of their hat and their weapon. Both blend into the white platform the player is standing on and the platform in the distance.

While you make your way to your enemy, note the color of your character — it's the same color as your weapon — and try to stick to terrain that camouflages you.

In fact, staying put in stealth mode is one of the best ways to approach a match and catch your breath, especially with two or three other players running around. Think of movement like a resource, and try not to expend too much of it.

Sticking to higher ground can help identify other players, too — especially if you have your back to a wall that's the same color as you are, and you close your eyes to a slit.