Tabletop gaming's most coveted trophy is a burned book

Who is Diana Jones?

Share All sharing options for: Tabletop gaming's most coveted trophy is a burned book

The night before the start of Gen Con, the biggest tabletop gaming convention in the U.S., a close-knit group of the gaming industry’s brightest minds gathered to bestow the 16th annual Diana Jones Award. It went to Eric Lang, a prolific game designer who himself had a hand in at least four new games being shown over the weekend.

But who is Diana Jones? And why has she come to be associated with one of hobby games industry’s most coveted honors?

As it turns out, she’s not a person at all. She’s a book. A burned book, encased in a plastic pyramid.

And she weighs a ton. We asked Lang why he wasn’t lugging it around the vendor floor like the Olympic medal, and he just shook his head.

But not having it with him all weekend didn’t make receiving it any less special.

You have no idea how much this means to me. pic.twitter.com/z9Rabbc2UX

The Diana Jones Award may as well be the tabletop world’s Stanley Cup.

As the website says, it’s given each year to "anyone and anything within the games industry and hobby ... [including] individuals, products, publications, publishers, distributors, retailers, clubs, organisations, conventions, events, trends, innovations and concepts." Past awardees have included the revolutionary card game Dominion, Will Wheaton’s TableTop web series and the novel role-playing game Fiasco.

Each year the awardee is chosen by a secretive group of individuals whose identities are withheld in order to preserve the integrity of the process. The committee — which is known to include author and game designer Matt Forbeck, artist and writer John Kovalic and designer James Wallis — is invitation only.

But literally what is the award? Well, it’s the very last copy of the The Adventures of Indiana Jones Role-Playing Game, a poorly-received RPG published by TSR in 1984. As the legend goes, sales of the book were so abysmal the the publisher set the last remaining copies ablaze rather than pay to have them thrown away. 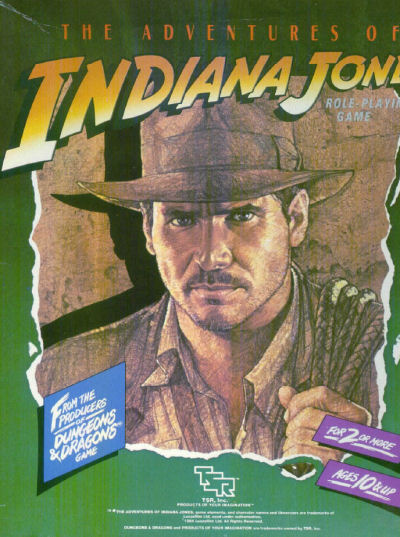 Indiana Jones was basically E.T. the Extra-Terrestrial for the Atari 2600, but of the pen and paper role-playing world. After the conflagration, some enterprising TSR staffer in the United Kingdom had a few choice bits of ash artfully encased inside a Perspex pyramid.

"It was liberated," reads the official website, "from TSR Hobbies by forces unnamed and subsequently came into the custody of a member of the Diana Jones committee" where it was first awarded at Gen Con in 2001 to Wizards of The Coast CEO Peter Adkison.

"The Diana Jones committee believes that a trophy that embodies the destruction of the last copy of one of the games industry’s most unloved and least-mourned products is a suitable symbol for the aims of the Diana Jones Award."