Behind the scenes of Tiny Epic Western and the microgame craze

Over the last few years, the tabletop industry has seen the rise of the microgame — tiny, portable games with minimalist components. The goal of the genre is simple: Get a game out where the people are, and get it on the table in a hurry. But while many microgames sacrifice depth and offer simple mechanics, designer Scott Almes and publisher Gamelyn Games are attempting to prove that even a pocket-sized board game can still pack a massive amount of fun.

And their latest creation, Tiny Epic Western, puts an entirely new spin on the traditional European worker placement game. How? By fusing it with a wild west theme and integrating a variation of poker into the game’s core mechanics. The result is one of the most enjoyable and thematic games, regardless of size, that I played at Gen Con in Indianapolis.

In Tiny Epic Western, players assume the role of a gang leader from the Wild West, seeking to stake stake his or her claim in town. In order to win, you’ll have to gamble with other players using various forms of influence — Law, Money, and Force. Each player also has a posse of pawns that, when placed on a location, not only activate an action on the card but also count as a bid for that building’s resources. 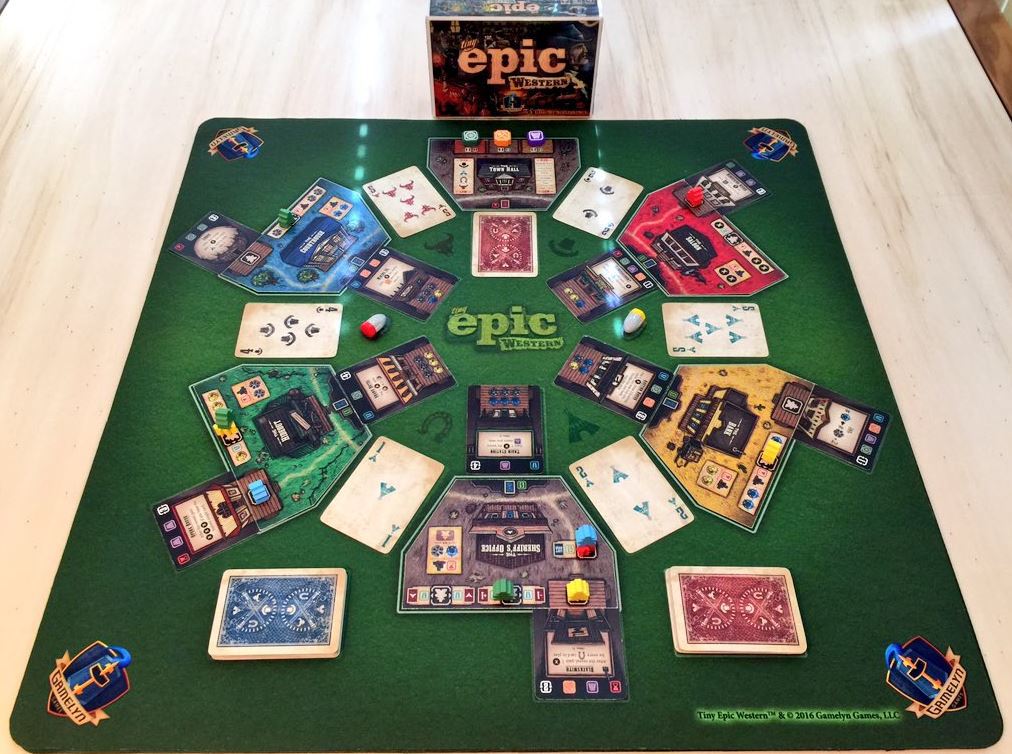 Scott Almes designed the game to resemble a wagon wheel on the table.

At the start of each round, face-up poker cards are placed on the flanks of each building, resulting in a wagon wheel-like setup. Instead of normal poker cards, Tiny Epic Western’s deck only includes cards from one to five to keep things simpler. Each player also receives a poker card of their own that can be combined with the two adjacent cards on a location to form a three-card poker hand. The game’s clever use of poker is what drives much of the action forward.

"When I looked at the different western stereotypes to bring into the fold, I thought poker was natural," Scott Almes told Polygon via email. "I wanted the poker element to be constantly changing. I wanted players to have different ‘hands’ and for the table to be constantly in flux."

Things get heated if more than one player attempts to visit the same location in a given round. In the spirit of the old West, a duel must take place between the two rivals and only one can remain standing. Each player rolls a bullet-shaped die and the highest roll wins the duel, wounding the losing pawn. Those forms of influence I mentioned before can be spent to modify or reroll the die, and keeping a steady supply of Law and Force is vital to winning shootouts. 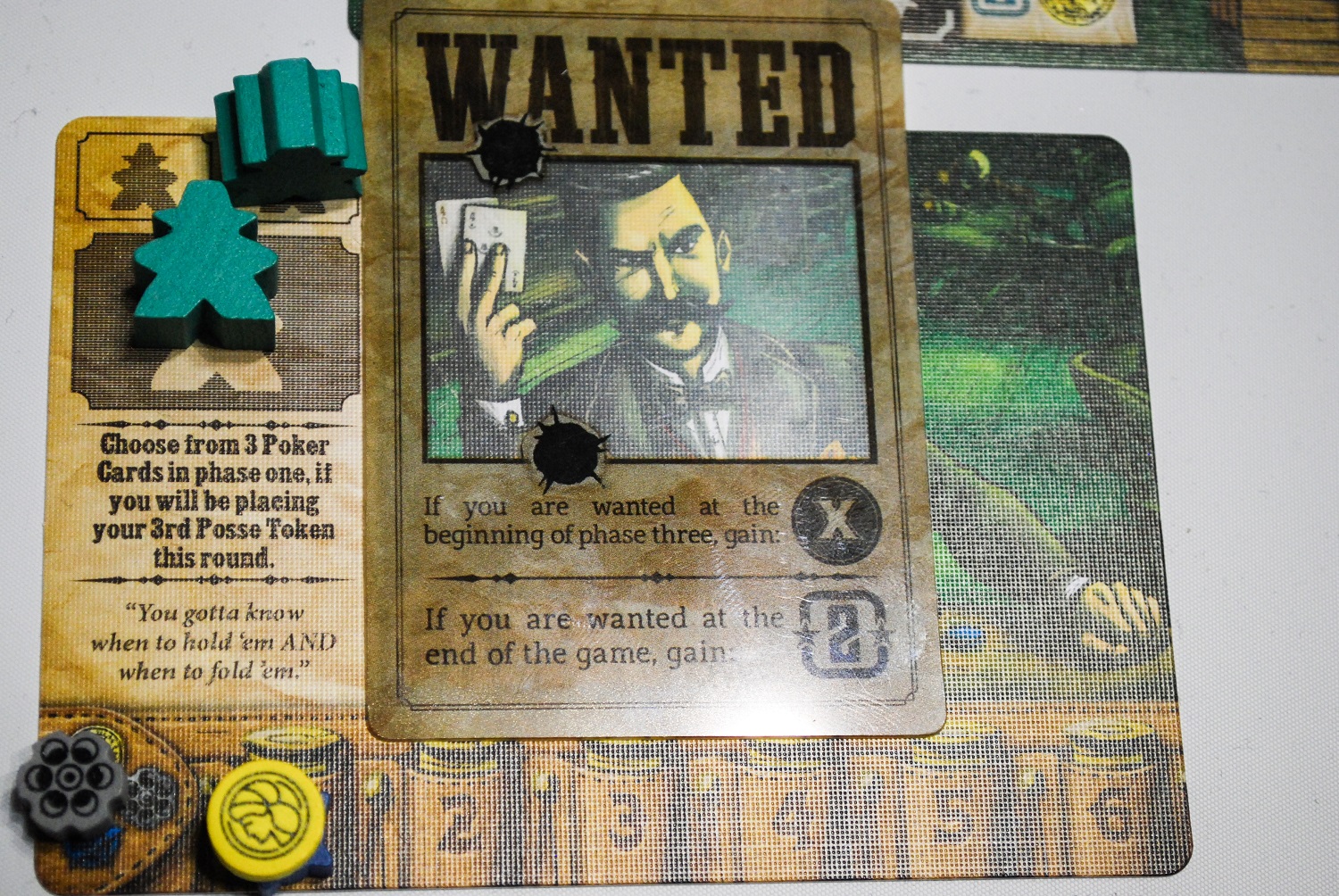 The winner of a duel also becomes Wanted, granting short and long term bonuses. However, after each duel, the previous player must give up their Wanted status to the new outlaw.

Duels are important because the winner gets to claim the resources associated with their location, which are translated into victory points at the game’s end. The loser walks away with nothing.

At the end of each round, players can use their accumulated money to purchase buildings to earn victory points. There are multiple paths to victory, and determining the best course of action for your posse is the key to success in Tiny Epic Western.

It may sound like a complicated game to wrap your head around, but after playing a quick round in the Wild West, our demo table was bluffing and dueling like true desperados. But the real accomplishment is how Almes was able to successfully pack such a deep and strategic game into a brisk 30 minutes and a seven-by-five inch box.

"The team that Scott [Almes] and I make up is an interesting dynamic in the way that Scott is a hobbyist," Gamelyn Games founder Michael Coe told me on the show floor. "He’s played all these big games and knows them through-and-through, but I don’t. So his designs and concepts come from the hobbyist background, but then they pass through the filter of just another gamer who wants a good easy-to-learn, quick-to-play game that has meaningful decisions."

Tiny Epic Western is the fourth game in Gamelyn Games’ Tiny Epic series, and each game is an attempt to compress a different big-box genre into the palm of your hand. The first, Tiny Epic Kingdoms, was fully funded on Kickstarter in 2014 and offered a micro-sized, half-hour adaptation of the massive 4X genre. The success of Tiny Epic Kingdoms allowed designer Scott Almes and publisher Gamelyn Games to continue their partnership and explore additional microgame experiences.

Tiny Epic Defenders was released the following year and tackled the cooperative tower defense genre to critical acclaim. And after a few short months, the third entry in the series, Tiny Epic Galaxies, had launched on Kickstarter, promising to shrink the sprawling space exploration category down to a portable size without losing any of the genre’s beloved depth. And at the end of the crowdfunding campaign, Gamelyn Games had successfully raised just over $400,000, dwarfing its original $15,000 goal.

A Kickstarter campaign for Tiny Epic Western concluded earlier this year and received nearly half a million dollars, blowing past its goal by more than 3,000 percent and making it the most successful entry in the Tiny Epic series yet.

The success of the Tiny Epic games has been life-changing for Almes, and he is grateful to his fans for allowing him to have a vast sandbox of tabletop genres to explore.

"One thing we're doing very differently than other brands is that we aren't just reskinning the same game in different things," Almes said. "Each base game is completely different. I want players to have a reason to try out each Tiny Epic game, and I want to make a Tiny Epic game for every gamer out there."

The next game in the series, Tiny Epic Quest, is a love letter to the classic games of Almes’ and Coe’s youth, like The Legend of Zelda series and Dungeons & Dragons. Players will embark on a sandbox adventure to slay monsters and acquire artifacts, all while dealing with deadly dungeons and a treacherous day/night cycle.

Tiny Epic Quest is set to launch on Kickstarter on Oct. 28, but in the meantime, fans of the old West can look forward to Tiny Epic Western becoming widely available this September.