Suicide Squad does have one really great scene

Share All sharing options for: Suicide Squad does have one really great scene

This article is intended for folks who've already seen the movie, and will include a complete description of a scene from it!

OK, look, Suicide Squad ain’t great. But if there’s one thing in it that really works, it’s a particular scene about 40 minutes in.

The biggest problem with the movie is sloppy editing that took important plot points and made them nearly impossible to follow. But the second biggest problem is that through bad writing, bad editing or some combination of the two, Suicide Squad never really gives its characters a chance to emotionally breathe. Many of them never really become more than a series of ‘bits’ before the movie reaches the point where everybody has to pull together to save the world, and by then it’s too late.

The characters pull together because otherwise the movie wouldn’t have an end, but without any actual character to hook the moment on, it falls flat emotionally — to the point of not even really making sense.

But one scene between Deadshot (Will Smith), Rick Flag (Joel Kinnaman) and Amanda Waller (Viola Davis) is everything the rest of Suicide Squad isn’t, in terms of presenting compelling characters. It’s the moment when the two government agents take Deadshot out of his cell and ask him to demonstrate his skills with firearms.

Floyd Lawton tells Waller, Flag and the surrounding guards that they must be crazy to uncuff him in front of a table covered in automatic weaponry. But he picks up a gun, loads a magazine into it, and — here’s our first tension ramp — swiftly pivots to point its barrel directly at the forehead of the guard who’s been making his life hell in Belle Reve prison.

Deadshot nods knowingly once all the other guns in the scene stop being waved around, without ever being fired at him. Blanks, he says. Or you would have shot me immediately. All these guns on the table are harmless, he says, because the thing is — he can tell that they’re not crazy.

Here’s our next tension ramp: Waller tells him he’s right, the guns are harmless and, without a hint of sarcasm or slyness, she urges him to pull the trigger and find out for sure.

Deadshot fires the gun into the air and answers two questions simultaneously: the guard isn’t going to die. And the guns do have live ammunition. Waller was lying. Did she lie because she didn’t want him to pull the trigger? Or did she urge him on because she wanted to see how he would react to finding out his gun was loaded when it blew a man’s face off? Either way, she’s just made it explicitly clear that the life of the guard in front of them means precisely nothing to her.

But the audience is barely absorbing that, because we’re still waiting to see what Deadshot — an imprisoned career assassin surrounded by his cruel and unusual guards — will do now that he knows that there’s half a dozen deadly weapons within arm’s reach, and one of them already in his hand.

He smiles. And then he picks up every gun and fires perfect head shots into every target on the range. Let’s be clear here: every bullet hits, but he only puts one hole in each target.

Will Smith does this joyfully — this trained killer is just so happy to have a gun in his hands again. It was one of the only moments in the film that made me genuinely grin at what I was seeing. Smith completely sells the idea that Deadshot does this better than anyone in the world, and that he knows it — and the chance to do it again is more important to him than vengeance, no matter how deserved.

the whole scene is a conversation just between Deadshot and Waller

It’s an incredibly efficient way to communicate what are arguably the two most important things the audience needs to know about Amanda Waller and Floyd Lawton: that she’s a stone cold, consummate manipulator, and he’s a man who fires guns like it’s his religion.

But there’s still a coda to all of this.

When he finishes, Deadshot turns to Rick Flag, gets up in his face, and begins listing the things he wants in return if he’s going to be on this team (custody of his daughter, a blank check to pay for her education, automatic acceptance to any Ivy League school she wants — we’ll come back to this). If you’ve seen a ‘90s era Will Smith action movie, you know exactly the kind of seemingly improvised rhetorical style the actor is employing here, and it’s a delight to see.

Flag responds in some way — I honestly don’t remember the line because I was too busy reacting to what happened next to commit it to memory — and Deadshot tells him "I’m not talking to you." That’s despite the fact that Lawton has deliberately been looking Flag in the face while saying all of this. I’m talking to your boss, he says, indicating Amanda Waller. There’s no indication in Suicide Squad that anyone has told Deadshot who Flag and Waller are or what their relationship is before this point.

And that’s the coda. 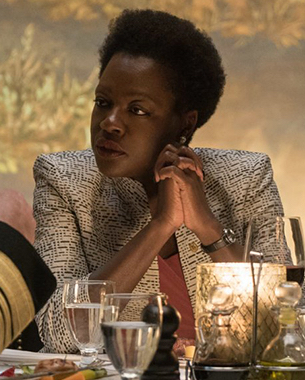 It should go without saying that the extra layer of Smith and Davis’ casting on this scene — the fact that it gives two of the most respected black actors in Hollywood today a chance to play two black characters acknowledging each other’s power while ignoring all the other (white) people in the scene — is magnificent icing.

Floyd Lawton is white in comics canon, but Smith’s casting is no cosmetic change when he demands, serious as a heart attack, that if it turns out his daughter can’t hack it at an Ivy League university, than he would like them to "white people that shit." It’s precisely how you know that he really isn’t talking to Flagg — he’s talking to the only other person in the room who is what his daughter might some day be: a badass, powerful, grown woman of color.

Deadshot’s target range scene does so much for its characters in just a few brief moments with them. If the rest of Suicide Squad had been half as compelling and narratively efficient, we’d be looking at a very different film.