An asymmetrical wargame in the style of StarCraft

Share All sharing options for: How a producer on The Sims made one of Gen Con’s hottest board games

Grant Rodiek, long-time producer for The Sims, has long had the desire to put his personal stamp on a game design all his own. But video games are expensive, so he’s been spending his free time working on a board game called Cry Havoc. After four years of work, it was one of the most anticipated releases at this year’s Gen Con in Indianapolis.

"I'm sort of a small nobody," Rodiek told Polygon during an interview on the convention floor. "It's done pretty well for itself and I'm really proud of the reception."

No, it wasn’t crowdfunded or self-published. Tabletop publisher Portal Games believed in the concept, and brought it to market on its own dime. The game sold out before the convention doors even opened.

We played a demo and interviewed the designer last week. Here’s how it works.

In Cry Havoc there are three very dissimilar groups — Humans, Machines and the Pilgrims — have all discovered an uncharted planet abundant with resources. However, a fourth indigenous faction, the Trog — a primitive, tribal species — aren’t willing to relinquish control of their lush planet without a fight. The four factions play very differently with different skills, strengths and weaknesses. In fact, fans of real-time strategy games like StarCraft will find much in common with Cry Havoc's factions.

Rodiek describes his game as an asymmetrical, science-fiction, card-driven wargame. It shares a number of mechanics from other popular board and card games but combines them in a wholly original way.

The Humans rely on rapid mobility to stake their claim on uncontested territories, and also have an ability to take control of regions from a distance, something that is completely forbidden for other factions in the game. A race of sentient Machines feature devastating combat-centric buildings and skills that make them a deadly force to be reckoned with in battle. The four-armed Pilgrims focus primarily on resource management, using their special abilities to generate crystals which can be used to power even stronger skills. And finally, the Trog begin the game at a disadvantage by sitting directly between the three other players, but have the ability to rapidly multiply and traverse the map through tunnels. 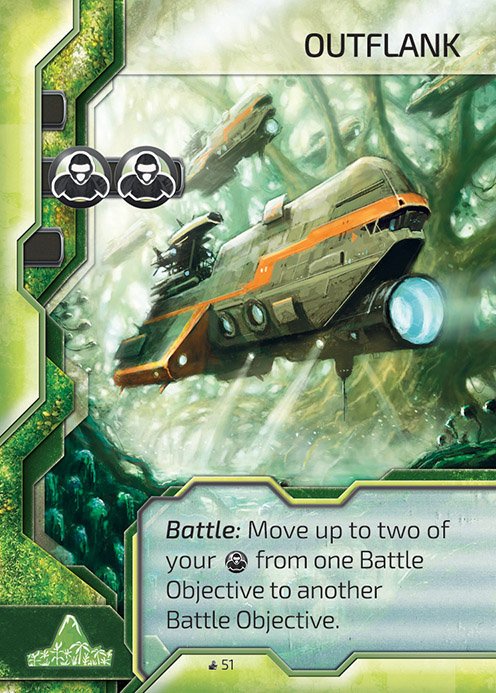 This jungle terrain card can either be discarded to recruit two new units or played during a jungle battle to switch tactics against your enemy.

The goal for each faction is to claim ownership over crystal-laden regions on the board. Possession of these crystals is the primary method of acquiring victory points, and many battles will unfold in an attempt to wrest control of these territories from each other. After five rounds, the game concludes and the player with the most points wins.

To take an action, players pull from their faction’s deck of cards, which can be discarded to either move units, recruit new miniatures from the reserve or build and activate buildings. Like other deck-building games, players can acquire powerful terrain-specific cards to add to their decks, allowing more efficient and effective turns in the future. From my experience with the game, loading up on cards matching the terrain in your immediate vicinity is a strong tactic that pays off in future battles.

Many cards have special text that can be played at the start of a combat to bend rules in the player’s favor, such as flipping the order of combat resolution. And depending on how units are allocated on the combat board during a skirmish between players, one might walk away with control of a region at the cost of losing a unit as a prisoner to their opponent. Combat resolution is rarely predictable, creating tense battles. 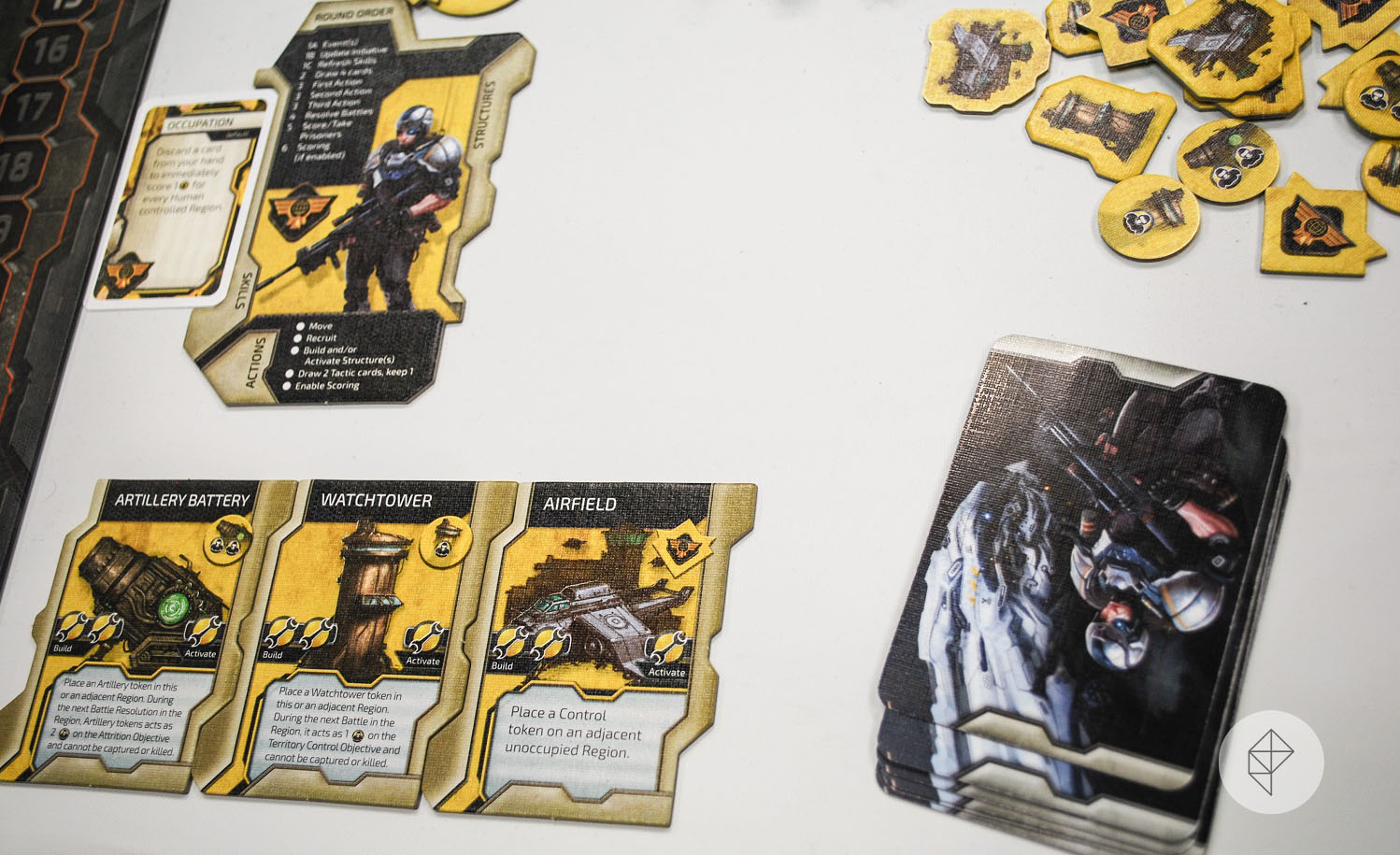 These Human buildings allow additional combat fortifications as well as rapid expansion across the map.

In addition to cards, each faction also has unique abilities that can be activated once per round. For example, Humans can claim ownership of territories without deploying a single unit, something that is not allowed by any other race. Machines possess the ability to move their permanent structures around the board, again normally forbidden by the rules. These skills are powerful and knowing when to invoke them is crucial to victory.

During my demo, I quickly discovered that the Trog player can easily run away with the game by effortlessly capturing the majority of the map, forcing a natural alliance between the other three players at the table. As the Human faction, I pushed hard to wrest control of multiple territories away from the Trog. In the end, the subterranean monsters were too much for Humanity and ultimately won. But I like to think I put up a valiant fight. 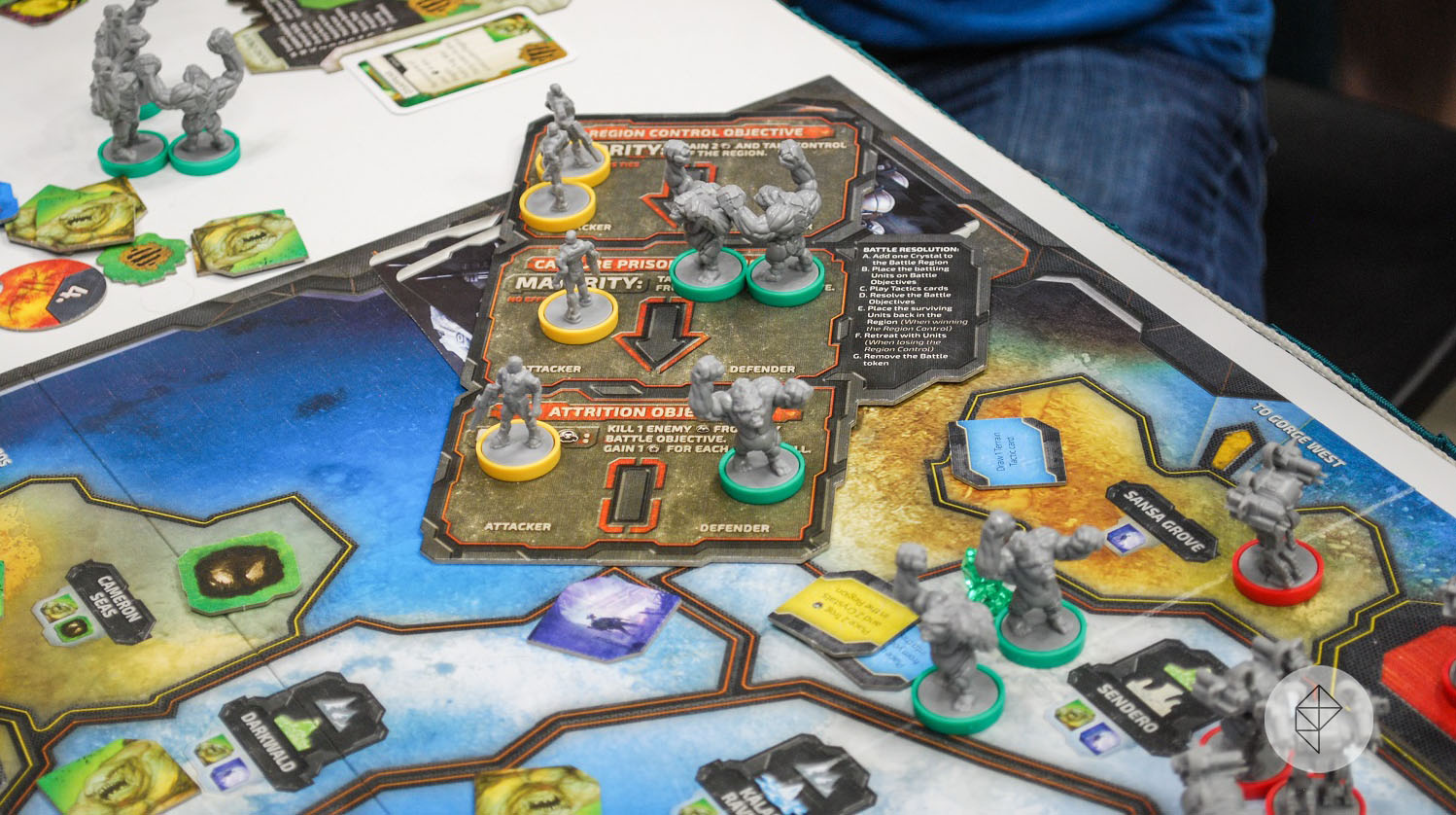 Combat resolution is a simple numbers game. For each stage of combat, whoever has the most units wins.

Each player at my table floundered during the first few turns as we struggled to wrap our heads around our factions’ skills and strengths, but after a round or two, everything clicked and strategies began to fall into place — the Humans rapidly expanded, the Trogs utilized their vast tunnel network, the Machines deployed merciless drone strikes across the map, and the Pilgrims generated crystals for their own benefit. And when that happens, the appeal of Cry Havoc’s simple-yet-elegant design becomes readily apparent.

The game has undergone many transformations over the years of development, which once featured 18th century Napoleonic-era warfare rather than space marines and alien races. Even the deck-building aspect of the game was added much later in development, according to Rodiek. But Rodiek claims most of this is thanks to noted game designer Ignacy Trzewiczek, creator of Imperial Settlers and Robinson Crusoe, who assisted with the game’s development process. Rodiek feels his time working in the video game industry has prepared him for the criticisms and tough feedback that come with game design and allowed him to be adaptable to sudden changes.

Portal games expects copies to be widely available in October.

Grant Rodiek has worked at Maxis for nearly 10 years and has been credited with a number of roles within the company, including project manager, producer and writer. He originally entered the industry with dreams of creating his own original idea, like his idols Will Wright and Sid Meier.

"Video games are so expensive," Rodiek said. "And they're so hard to make that you quickly learn that, 'Oh no, I'm not going to get to make my own game, I'm gonna work for the company.' Yes, there are independent people but a lot of them know how to code and animate and do all those things, and I don't know how to do that stuff."

So, Rodiek took to designing tabletop card and board games during his free evenings and weekends.

Portal Games is expecting copies to become widely available in October, but according to Rodiek you might want to pre-order now if you want your hands on it.

"From what I'm hearing it's basically sold out, so if you see it in your store and you want it, you should get it."