Finally, an Apple Watch game that doesn’t play itself

Have a field day in Field Day

Share All sharing options for: Finally, an Apple Watch game that doesn’t play itself

The major new firmware update for the Apple Watch has only been out for a day and we’re already seeing the impact it could have on wrist gaming.

Everywear Games, the folks behind Runeblade and Time Unit, have a new farming game out that uses 3D graphics — a first for Apple Watch gamging — and is surprisingly addictive. 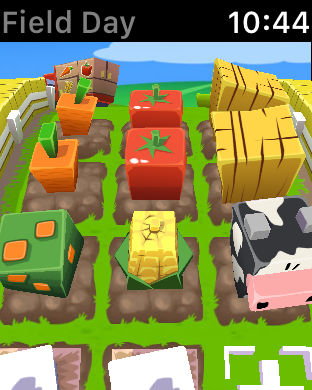 Field Day has players use the dial on the watch to rotate the worldview through a screen with your house, a truck used to sell off goods and your plots of land used for planting plentiful crops.

The game starts off with a single plot of land and only the ability to grow carrots. They sprout in five seconds, but only let you net a single gold piece. As you continue to make money, you use the cash to get more crops and when your farm grows, so does the interest from town.

I’m not too far into the game yet, but I’m told that over weeks and months I will unlock the ability to add new crops and even raise animals.

The game also supports iMessage stickers, a great new iOS 10 tool used to harass the ever-loving hell out of your friends.

WatchOS 3, which is a free upgrade for the Apple Watch, both expands a lot of the features offered on the watch and redefines how others work. A new dock, for instance, changes the functionality of the watch's sidebutton, making it much easier to get to regularly used apps. The OS also allows apps to run in the background and supports 3D graphics.

The game is free to play and at least so far, there’s no way to spend a penny on it. Check out the video below for a look at the title (and a bit of what’s new with WatchOS 3) in action.