I heard you like joysticks, so I put joysticks on your joystick

Earlier this spring, joystick and flight peripherals manufacturer Saitek quietly released the X-56 Rhino, their first new, consumer-grade hands-on throttle and stick set since 2014. It’s been met with mixed reviews, with some calling it garbage and others falling deeply in love. We had Saitek send over a sample, and what we found is pretty interesting.

If you’re into flight sticks, that is. Or virtual reality.

Last year at the annual Star Citizen fan convention, CitizenCon, Chris Roberts pulled the cover off a brand new HOTAS set. Combining a throttle and stick, it also included an attachable tenkeyless keyboard and numeric keypad. Mixing and matching would, theoretically at least, allow players to use however many of the four component items they want to play the Roberts’ ambitious spacefaring game.

But what had me really excited were the little trackballs embedded in the stick and throttle. They’re designed for a number of in-game uses, like tracking targets or navigating the heads-up display. Or they could enable virtual pilots to get up out of their cockpits and traverse the game world in first-person.

They basically duct taped a controller and a HOTAS together, making sure you’ll never need to take your hands off the throttle or stick. 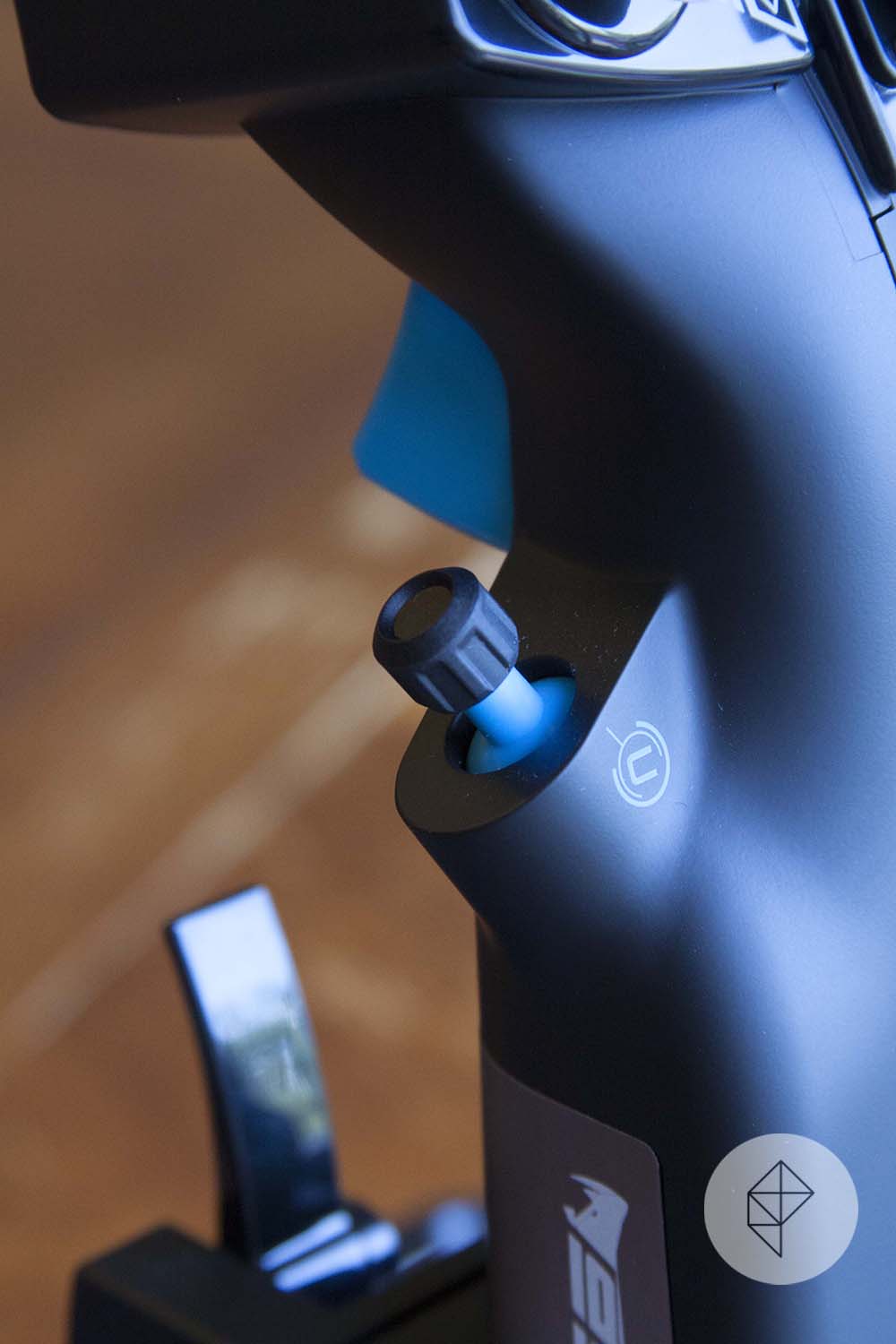 The X-56 does something different than the proposed Star Citizen device. Saitek has actually integrated two analog thumbsticks — not simply hat switches, real joysticks — into the throttle and stick. They’re in the perfect spot for users’ thumbs. You can see them in my photos below; they’re colored blue.

I took them for a test drive in Elite: Dangerous, and they’re not too shabby. A little mushy for my tastes, and therefore not really useful for FPS play yet. But they greatly improved the use of my landing thrusters, and the thumbsticks could be mapped to a number of other useful, analog-friendly doodads on the dashboard.

Later, though, I tried the X-56 in War Thunder and simply could not get the game to recognize it at all. For a product that came out months ago, that the most popular free-to-play flight simulator in the world is having issues with it is troubling.

More troubling is that the X-56 suffers from the same limitations that hobble the X-55. 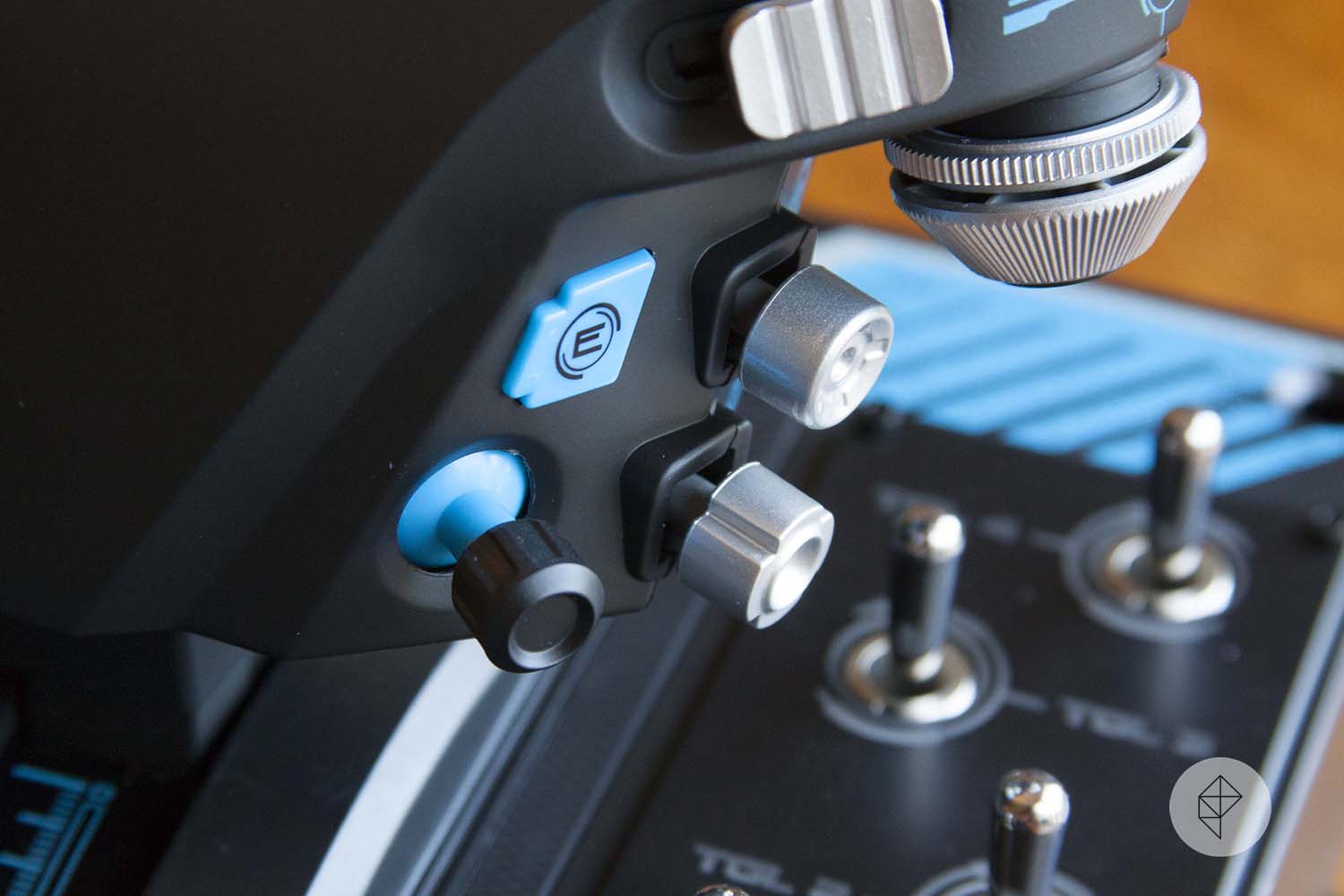 In my opinion the throttle is way too stiff. Even at the lightest tension setting, I was pulling it right off my desktop. There’s integrated mounting holes, but I shouldn’t have to screw the thing into my desk to make it work right. Also, I have big hands. The X-52, dating back to 2008, is a much better fit for me. The X-56 includes a riser plate for those with very small hands, but even with it off, it’s a bit too tight for me. Your mileage will vary.

What I can tell you is that a small subset of flight sim fans are pissed about the X-56. They tore it apart and claim that the wiring is a shambles. Someone claiming to be a former United States Air Force mechanic came into the comments to agree with them. The video is below if you want to spend the time on it.

Long story short, if you’re looking at a Saitek stick for spaceflight and the X-52 isn’t doing it for you, you can’t go wrong with the X-56. But check the message boards of your flight sim of choice for any compatibility issues before you make the $250 investment. If you're more of a Messerschmitt ace than a starship captain, you could be in for a few choppy flights.