Focus on what you know.

Share All sharing options for: How we mixed Tinder and politics to make a premium hit on mobile 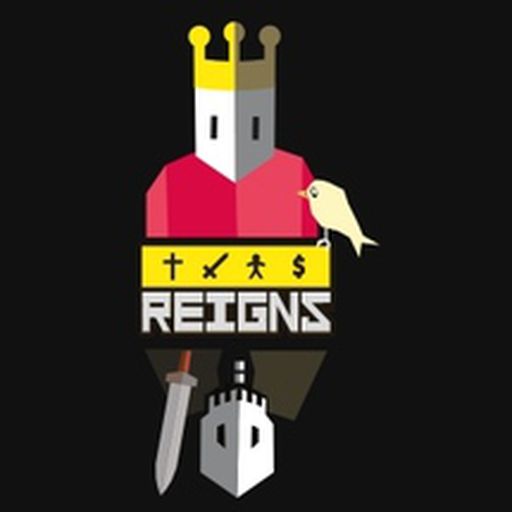 I woke up last week with the news that Reigns, our little "swipe to build a dynasty" game, managed to creep up into the Golden Hall of iOS: the Top 100 Grossing Games in the U.S., alongside behemoths such as Minecraft, Kim Kardashian: Hollywood, Hearthstone, Candy Crush variations and all those angry men showing their teeth (Game of War, Clash of Clans ...). I’m told it hit more than $1 million in sales in less than a week.

In a short period of time, I received a lot of messages asking how we managed to make a premium success on mobile, as Reigns is turning into one of those unicorns that demonstrate how crushingly difficult it is to survive against free-to-play games.

The honest truth is that during development I never thought that a premium pricing strategy was a bold strategic move, but rather, the default choice. Like so many indies, I lack the skills to make a good and entertaining free-to-play game. I just don’t know them well enough. I play some, I read about them, but that’s about it.

Face the perpetual storm of the mobile market

The only thing I know about successful free-to-play games is that they’re very good at developing strategies to face the extreme volatility of the mobile market.

The stores are like distant alien planets eternally engulfed in violent storms. With more than 500 new games a day on the App Store, releasing any game (paid or free) is like engineering a spaceship able to land on that planet and be grounded as deeply as possible in order to weather the storm and then grow sustainably. Even if you’re featured prominently by Apple, you will have a hard-time surviving your "week of fame" if you don’t find a way to embed some roots within this time frame.

Successful free-to-play games are very good at grounding an audience. They succeed, in part, with gameplay constructed to harness players’ time for as long as possible within the frontier of the game. This is accomplished by creating their own micro app store through in-app purchases.

So, how did we create a success with a game like Reigns, a $2.99 premium app coming from nowhere?

Push your ideas forward, there’s plenty of unexplored space ahead

When we first played with the idea of a "dynasty-management-slash-narrative-game-à-la-Tinder," the game was still quite open. We wanted to mock the way our societies tend to deal with complexity, especially in modern politics.

As a Frenchman installed in London, I had the best example possible of this in the recent political disturbance aptly titled Brexit. It’s troubling to think that a deep and complex decision involving the future of a whole continent was defined by the same mechanic as a casual dating service: a binary choice made disappointingly simple, crushing every nuance that a complex subject demands. Swipe either right or left. Accept the huge geopolitical consequences.

One of the strong points of Reigns is that we tried to define every part of our production in conjunction with that core mechanic. The tone of the game and its writing, its art, its systems and its music all worked together. Even making that effective meant having to evolve the skills needed to work on each aspect of Reigns.

We wanted players to constantly feel the gap between the terrible consequences of the decisions they were taking as a king and the silliness of the swipe mechanic, where only two options are available at any given time.

This gap creates a comical contrast and sets the tone of the game and the rhythm of a King’s life: a (generally) short succession of bad decisions that inevitably ends up with the death of the King, preferably gruesomely. This also led to the narrative system implemented in the game that hides a lot of complexity behind the binary system.

Very quickly you begin to understand that some of your decisions have a long-term impact: adding characters, bits of stories, effects or different gameplay.

Writing the first batch of cards and messing around with the mechanic was exploring brand-new territory that we knew had not been done before. I really think that when, as a designer, you find an idea that clicks like this, your job isn’t necessarily to build a perfect system that corresponds to your initial idea, but to stretch the concept to its limit.

For the writing, this meant working on small, impactful sentences that hit the player with surprises, catastrophes, deaths and unanticipated consequences to their decisions. This was a difficult exercise, as I’m much more at ease with long sentences that take their time to explain things in detail and color, as you may understand by reading this.

But it was necessary for the tone of the game and for the player. Writing for a game is really about how much space you create for your players’ imagination to kick in and fill the gaps. It’s not grand literature; it’s impactful pieces of texts serving gameplay experienced by players.

For the game systems, this meant sprinkling the game with hints that the apparent randomness of the cards was hiding something with a lot more depth. When that sort of trick is pulled three or four times in a session, it creates the sensation that every single card is potentially a meaningful choice, with a lot more going on behind the scenes than what the eyes can see.

Reigns’ narrative system uses probabilities to create different paths among the 750 cards: Some are very narrow alleys with linear elements directly linked together, some are large roads mixing elements from a theme over centuries, and some are open fields of random questions.

I also love to fill my games with small systems no one will notice but that create some sort of meaningful background noise and add to the mystery of the game. For example, in Reigns, you may notice that the characters’ eyes are blinking from time to time. If you say "no" to them too often, they will become stressed and start to blink more quickly.

As a result, the negative consequences of the next cards you have with them will be more significant, and they may come and ask you if you trust them ... and try to kill you later if you ignore them.

Try and hedge your bets

Another thing that worked well for Reigns was preparing the launch so the game could find an audience both on desktop and mobile.

From the start we wanted Devolver Digital's help to publish the game. Devolver has created something unique in the game industry: a label that ignores the classic territories of PC vs. console vs. mobile. They are akin to one of these "cool indie" record labels, putting artists before the device their work is played on.

The essence of the label is hard to define: You don’t know what sort of crazy game they’re going to release next, but you know it will have something special. All their games share some sort of edge or sharpness associated with a promise of depth behind the pitch. It’s not a formula producing copycat games; there’s really not much in common between, for instance, Hotline Miami and Hatoful Boyfriend. Still ... both of them are definitely Devolver. They share that spirit, that wit. They love to scratch the very homogenous word of "gaming," and preferably not gently.

This label allows Devolver to do things differently from just about everyone, and that included helping us find our audience. The amazing Downwell was the best example of that. This is a superb game, smart, frantic and bold. But it has this terrible genetic disease that makes it so dangerous: It is, at its heart, a mobile game. And yet, Devolver managed to break that image and make a Steam success out of a mobile game with vertical scrolling. This was the proof that the carefully erected frontiers between devices and gamers are not that real. Players love to play games.

For Reigns, releasing the game simultaneously on Steam, iOS and Android is definitely one of the main reasons the game succeeded. From the point of view of a game developer, these stores are not really competing with each other. The market is so huge that they’re much more like echo chambers, each one actually helping the spread of the game in the other places.

The availability of Reigns on Steam made it accessible for a core of gamers recognizing the interest of the narrative, some of them being influential YouTubers, which helped to spread the word effectively. This in turn helped the sales on the mobile stores, which in turn helped to support Steam sales, and so on.

Making a premium success puts you in a difficult position with regard to your indie peers, especially when you read about the constant flow of disappointed developers swept away by the perpetual storm of the mobile market. I would like to be in a position to tell everyone, "Here, this is how you do it, this is how you succeed!" But even if the points I made in this piece are valid, in the end, Reigns’ success is mainly the result of contingent decisions mixed with an indecent amount of luck.

There’s no reliable recipe to the making of an indie success, mainly because our best selling point is that we try to do things differently every time. That thirst for innovation is also why the stores will always need and promote quality indie games: We bring new stuff to the party.

In the end, making that success is all about pushing ideas in the direction they seem to grow naturally, and make sure you find the best people to help you put the game out there under good conditions. Even if you’re self-published, you need that sort of help in one way or another.

François Alliot is a game developer who created the studio Nerial three years ago. Through Nerial, he has worked on five games: Singular, Magic Shot, Passengers, Devouring Stars and Reigns.