Two-person team does what No Man’s Sky don’t

The premise for Osiris: New Dawn as a product sounds improbable, if not impossible. A multiplayer adventure survival game — complete with crafting and base building — coupled with an action-packed first-person shooting experience. If the team at Fenix Fire can pull it off, it has every chance of being the next smash hit on Windows PC.

"We really have no business making a game this ambitious," said Brian McRae, one of just a pair of developers that’s been working on the game for the past five years. "But we just couldn’t help ourselves. I guess, left to our own devices, we wound up searching for the holy grail of … something? Is it a role-playing game? Is it survival? I don’t know. It’s just a game that we’ve always wanted to play."

I got a chance to play the single-player demo at this year’s PAX West and was stunned by the diversity of experiences on offer. It feels stable, it looks polished and it just might be the kind of all-inclusive experience those disappointed by games like No Man’s Sky have been looking for. 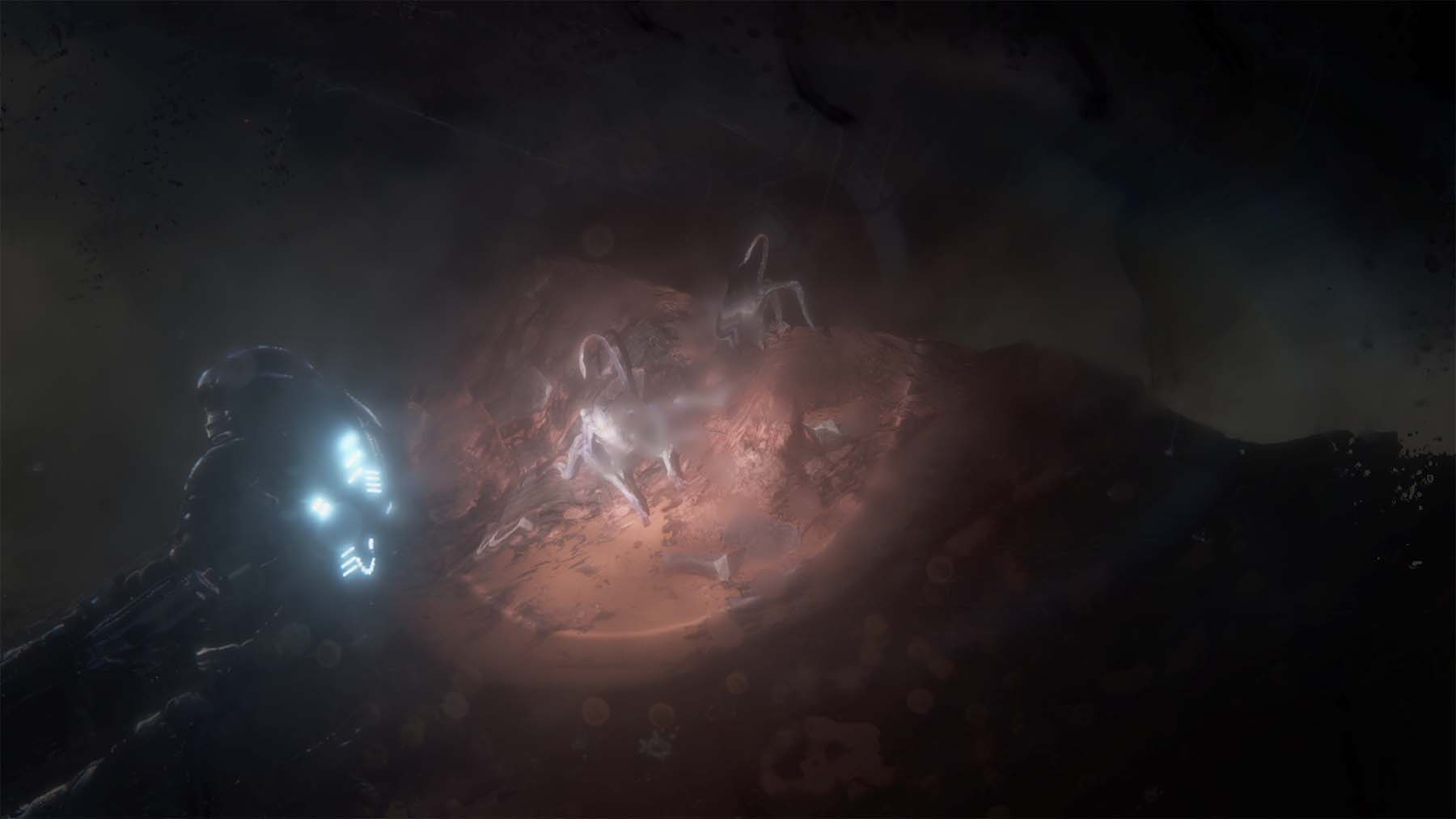 Players start out by joining a faction, either the United Nations of Earth or the Outlanders, which McRae likens to space pirates. The final game will be class-based, with scientists, marines and engineers each starting out with slightly different stats. Ultimately, experience will be use-based so that players can customize their characters by doing what they best like to do in-game.

After character creation, players crash-land on a deserted planet. There are two starting planets in the game, a Mars-like environment for the UNE and a Hoth-like planet for the Outlanders. After gathering up the scattered components of their dropship, players will need to forage in the wild for the resources to build up a habitable basecamp, smacking rocks with NASA-inspired tools. 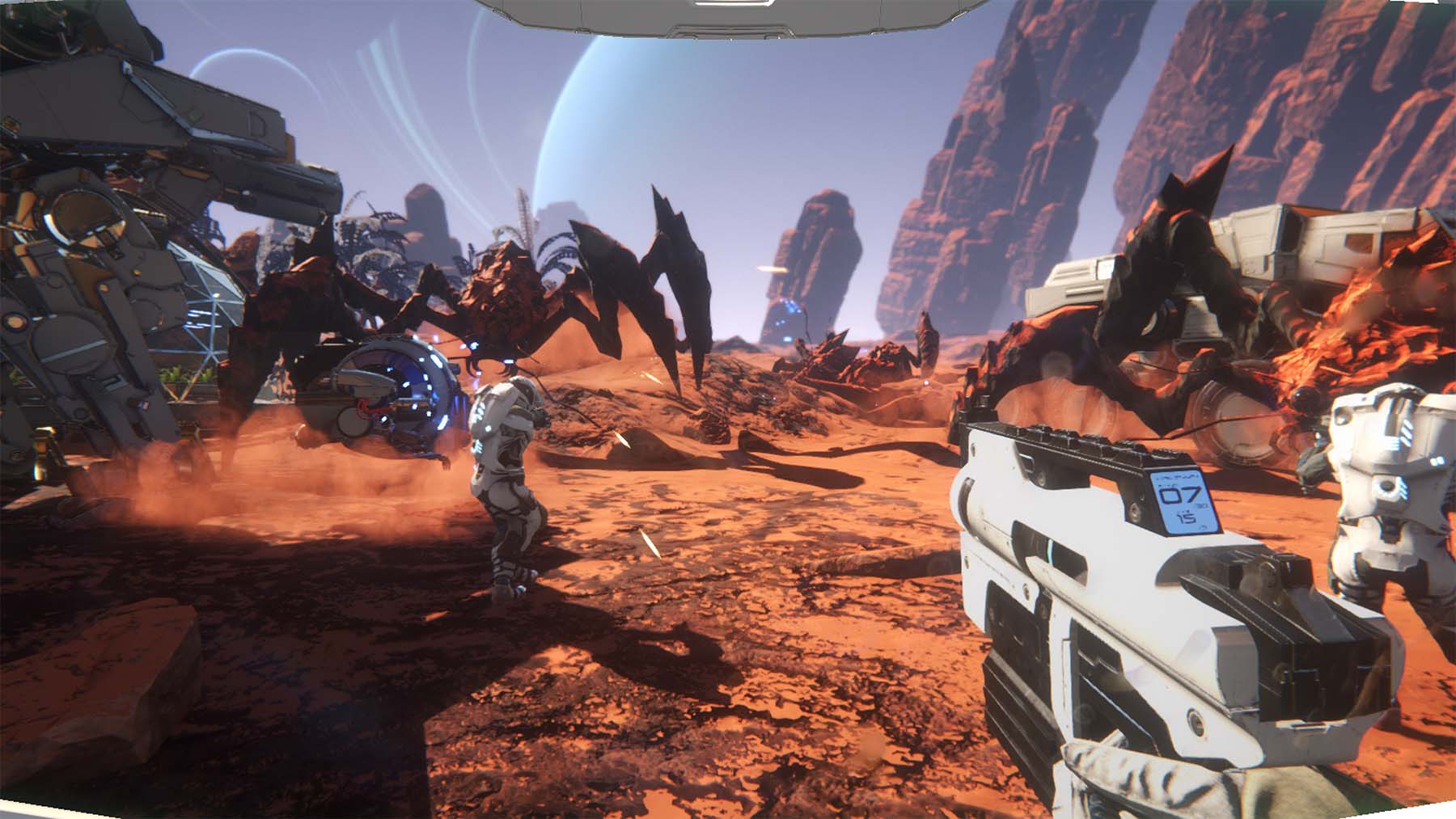 The starting pistol has a very slow recharge rate, but it will never run out of ammo.

Every player starts the game with a single-shot, rechargeable energy pistol and an assault rifle. Both first- and third-person views are available, as well as down-the-sights aiming.

"As soon as we put those in," says McRae, nodding slowly, "we were like, yeah. This feels good."

Populating each of the game’s starting planets are indigenous flora and fauna. I saw scuttling stingray-like creatures, hulking crab monsters and even a Dune-scale sand worm. The attention to detail stood out. Every enemy felt like they belonged on their home planet and fit in with their environment. They also behaved in very interesting ways.

"We put little hiding nodes around every little rock in the game," said McRae, "so that if they’re wounded as they’re going along and if the creatures have a line of sight, they actually see the rock and then they know to path-find around it and hide.

"They also know how to flank, just like the velociraptors in Jurassic Park. One of them starts to attack, and the other ones will go around." 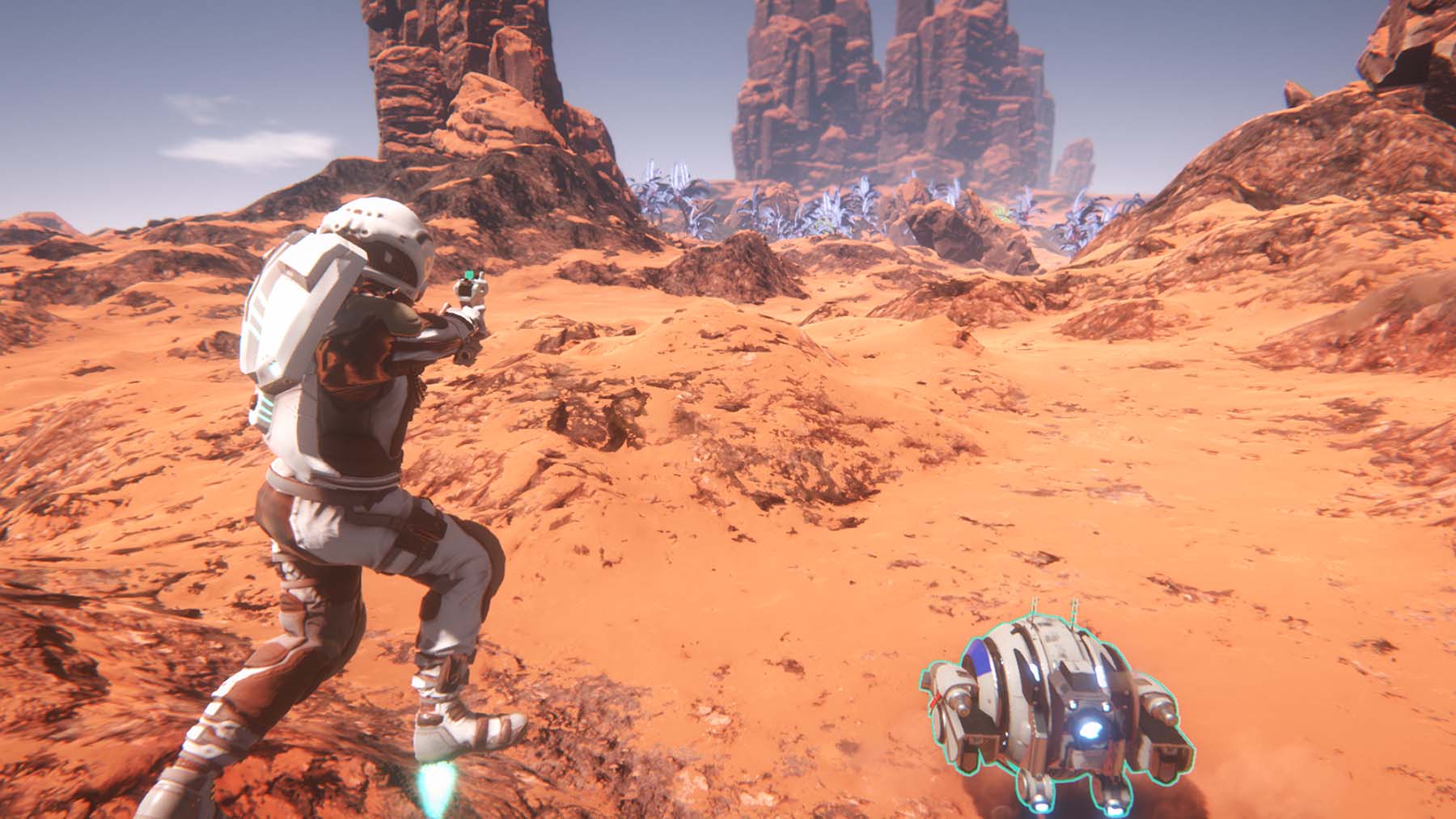 Four decades in the future, rocket boots are standard issue for all astronauts. So are droid companions. The game will feature more than 20 craftable chips, and each will allow your robot companions to perform different tasks autonomously or at your side.

But in Osiris, you don’t have to kill everything that you see. It’s also possible to tame many of the game’s creatures so that you can ride them.

The closest comparison I can make for Osiris is to Ark: Survival Evolved, the prehistoric-themed title that exploded into the gaming zeitgeist nearly a year and a half ago. Since its launch, Ark has maintained a top-five position among the most played games on Steam thanks to its survival hooks and open-world, team-based exploration mechanics. As it turns out, Osiris is being published by Reverb Triple XP, a new initiative from the marketing team at Reverb Communications — the same public relations company that represents Ark.

"They really helped us out a lot on how to dial in some of the crafting components. Because we’re a two-person team and we both kind of come from more of a Nintendo background. We love action and gameplay and just sort of that magic that Nintendo games have. The ease of use. To be able to just jump right in and everything is intuitive. So, on one side of the coin you have simulation. On the other side you have gameplay. Just fun. And we wanted to be more on the fun side."

In addition to an experienced publisher, McRae also has his own bona fides in spades. He’s built multiple experiences for the Oculus Rift and was the environmental artist on StarCraft: Ghost. 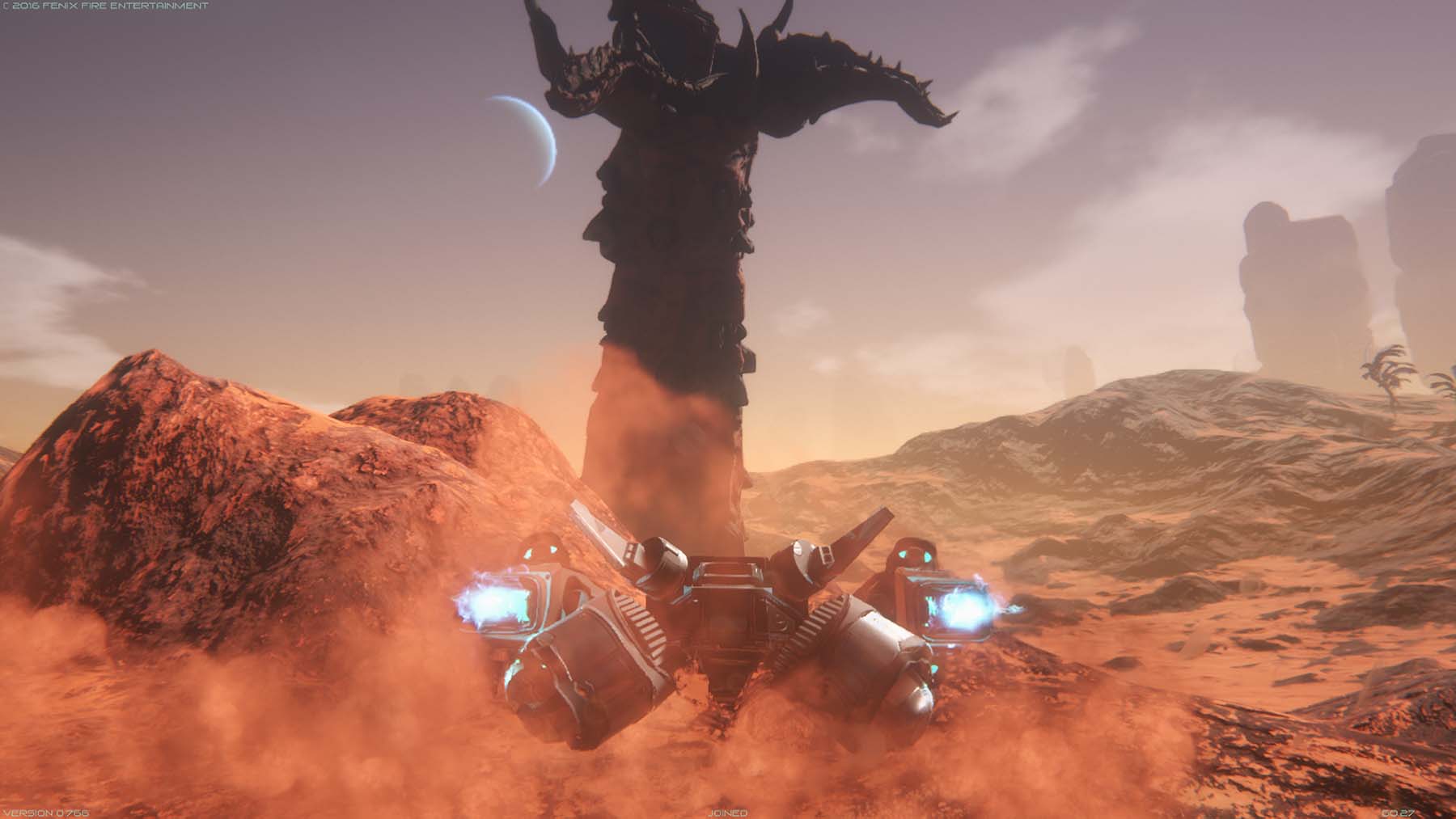 Yes, that is a sand worm. No, you can not ride it, Maud'Dib.

"I love graphics and art," McRae said. "I was in the room when Ghost got indefinitely postponed. I’ve been asked to do interviews on it, but I decline because of the NDA."

With Osiris, McRae’s work didn’t stop at wildlife. There is an entire base-building mechanic that allows you to make large, habitable structures. These structures are modular, so you can mix and match and connect them however you like. There’s also a laundry list of vehicles: a hoverbike, an eight-wheeled party bus, a tank and a 30-foot tall mech. There’s rockets, starships and space stations. And, eventually, each one will be customizable.

"In the near future," McRae said, "we want to offer vehicle crafting. To allow players to be able to start choosing what pieces you want to put onto your mech, onto your tank, onto your hovercraft. The whole thing’s gonna be modular.

"Everything is object-oriented. And that’s one of the ways that we’ve been able to build so quickly and have such a stable build is everything in the game just sort of runs itself. So, take the guns. Nothing else in the game knows how many bullets the gun has except for the gun. And then, when the gun shoots, nothing knows how much damage it’s going to do except for the bullet. The bullet actually has to hit something to then cause the damage, so everything is object oriented. When you push throttle on the hoverbike, we actually have a computer on the vehicle that then sends the throttle to the stabilizers and the engines. So if those are damaged, then they don’t function and the hoverbike leans to one side." 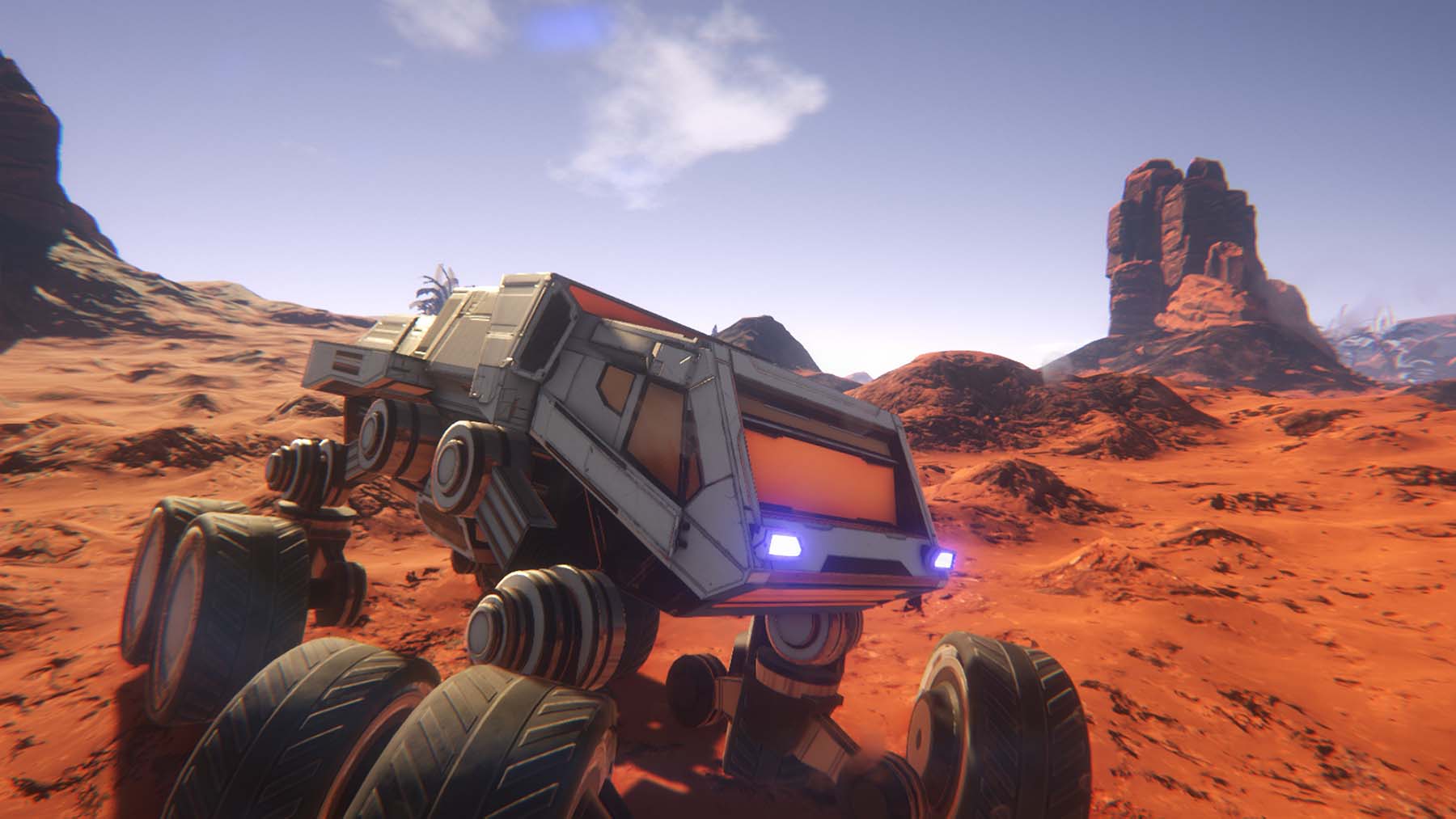 The eight-wheeled rover features articulated wheels and room for multiple players and their robot companions.

I only had a chance to see a fraction of what Osiris can do during a short demo, but if even half of what Fenix Fire has shared works at scale, the final product could be something very, very special. And players will have the chance to experience it themselves before long.

Ten separate public-access servers will launch soon, each with two 60-square kilometer planets that players can travel between.

"It takes two to three hours to walk from one end to the other," McRae said. "They’re hand-crafted, the whole thing. The only part that we did procedurally is the erosion and sediment carry from the mountains, mountains that we placed with our own artistic brush. We did the procedural generation to make them feel like they’ve been there a while."

If those ten servers fill up — which I expect they will, and quickly — McRae says he has a plan to scale their infrastructure rapidly into the cloud. In my opinion that’s a gamble, and in the early months it was something that Ark failed spectacularly at.

We’ll see how it goes when the game enters Steam’s Early Access program on Sept. 28. The team also plans to launch on modern consoles at a later date.