Long before The Elder Scrolls: Legends, Pete Hines was hooked on Magic

Share All sharing options for: Long before The Elder Scrolls: Legends, Pete Hines was hooked on Magic

It’s not every day that an executive at a game developer goes up against a skilled Twitch streamer live on stage. But when I met Bethesda vice president Pete Hines at this year’s PAX West he was preparing to do just that. Waiting backstage was popular streamer Kenji Egashira and in just a few minutes they’d clash over The Elder Scrolls: Legends, Bethesda’s new online collectible card game.

But as Hines and I talked, it became obvious that he was not messing around. Turns out he’s tremendously passionate about CCG’s, and it all goes back to a fan convention nearly a half decade ago.

In many ways, TES: Legends was born at PAX.

"Four of five years ago," Hines told me, "a colleague that I work with introduced me to Magic: The Gathering. He was playing here at PAX West."

That colleague was Ed Davis, Bethesda’s account director at the creative agency AKQA. Hines and Davis have been close ever since they worked together to support the launch of Fallout 3. Davis, it turns out, is an avid Magic player.

"Ed was playing sealed," Hines recalled. "I asked, ‘Wait, what’s 'sealed'?’ He said, ‘Well, we just get six packs and open them up and try to build the best deck to go up against everybody else at the table.’ And I thought that was really cool."

Instead of chasing after the most rare and expensive cards like many top Magic players do, Hines discovered that he could compete in a much more dynamic environment through sealed games. After his first game at PAX, he was hooked. 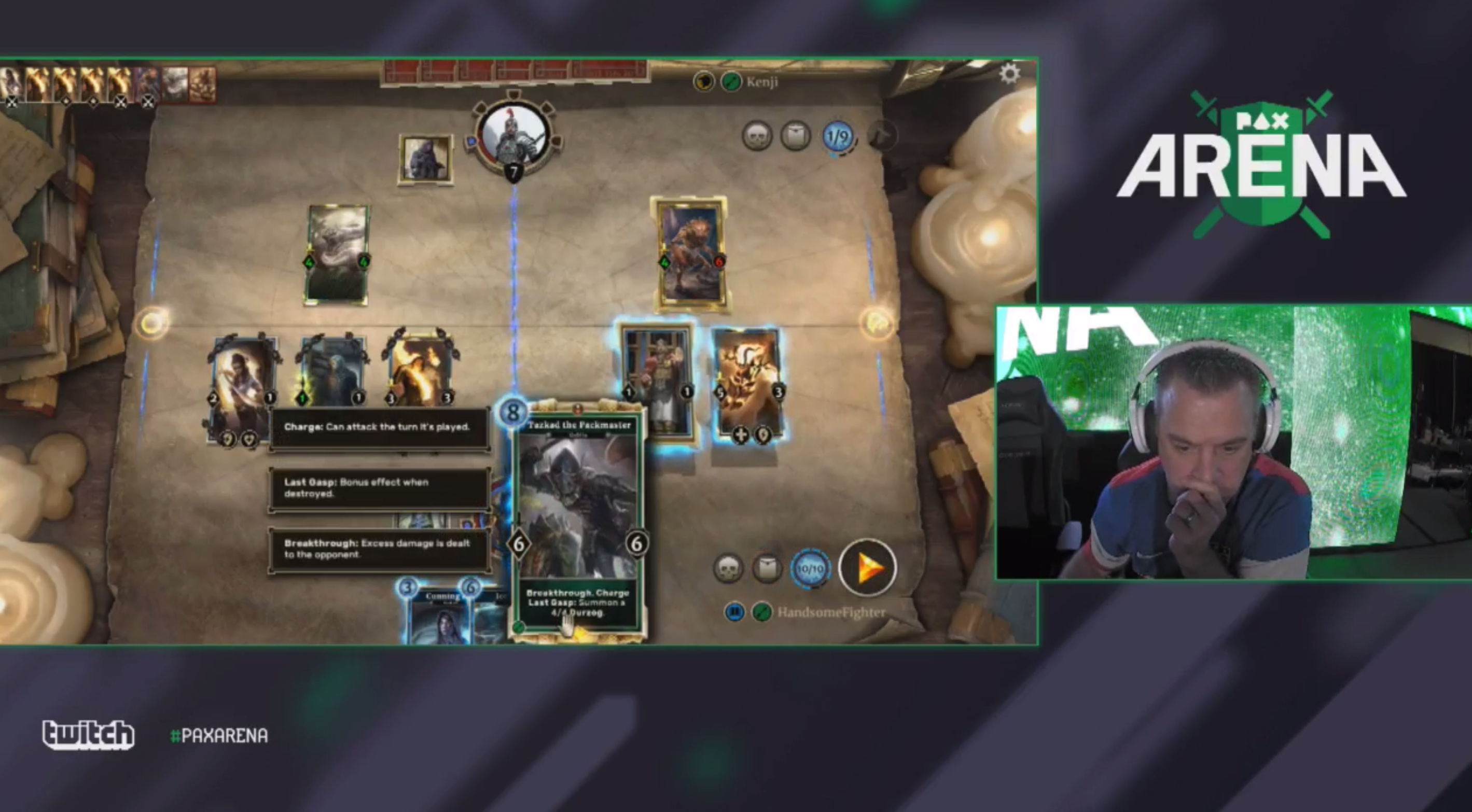 But Hines’ interest in strategy card games didn’t stop there. He began to sample many different kinds of collectible card games like SolForge and Hex: Shards of Fate, but also card-driven strategy games like Card Hunter and Dominion.

"I played Gwent inside the Witcher games and I played Pazaak from Knights of the Old Republic," Hines said. "Magic triggered something in me. I love that aspect of learning. And I started trying and playing a bunch of other ones and sort of seeing how they were different. Ones that I liked and ones that I didn’t like.

"I even played the Pokémon card game with my kids."

Through his explorations, Hines eventually connected with Paul Dennen, the creative director at Dire Wolf Digital and a veteran tabletop game designer.

"His notion on Legends was that he wanted to do some new things," Hines said. "One of the things that he really was keen on doing was having a battlefield so that where you played your cards on the table mattered."

"The franchise means a lot to me, and I want Legends to be something that matters a lot to people."

Many direct-attack card games, like Magic and Hearthstone, have a single playspace. But Legends has two, one on the left side and one on the right. Dennen’s seemingly simple change, Hines said, has huge ramifications in the strategic decisions players are forced to make at the table. Do you spread your units defensively between the two lanes and try to wear your opponent down? Or double down on a single lane and attempt to land bigger hits while absorbing less damage on your undefended flank?

It’s those kinds of choices that have made Legends one of Hines’ favorite CCGs, which is why he’s been so active in its development.

"I have a million ideas for stuff that I want to do," Hines said. "Basically, I joke with Paul Dennen all the time. His primary job is making Legends, but the thing he spends the second-most amount of time on is basically answering emails from me where I’m asking, ‘What if we did this?’"

But Hines’ passion for Legends goes deeper than just the game system to the source material itself.

The next step in getting the game in front of more players is getting it on to more platforms. Right now the game is in beta exclusively for Windows PC. But in a few months time, Hines said, he expects to see it released for Mac and iPad. Until then, he and other devoted players will continue to compete online and share their thoughts with the development team.

After our interview, Hines and I shook hands. He shouldered his backpack, took the stage, and proceeded to beat Kenji Egashira two games to one.

You can see the entire match archived here starting at the one hour mark.