Destiny: Rise of Iron is safe and predictable, until it isn’t.

Two years ago, when Destiny first launched, it was a mess — ambitious and flashy but lacking a cogent story or much content to keep people busy. Bungie spent the game’s first year piecing it back together, and eventually got it to a workable state with The Taken King expansion.

That first year was awful, but it was also interesting. The changes were dramatic as the game took shape live before players’ eyes.

Those Wild West days of Destiny are now behind us. Bungie’s latest expansion opts for stability over chaos and lacks the same exciting spark that Destiny once had — at least for those unwilling or unable to reach the height of the endgame.

Rise of Iron’s storyline feels like a vestige of "Year 1" Destiny, and that isn’t a good thing.

Rise of Iron follows in the tradition of the other Destiny expansions, in that it expounds on a side story in the game’s universe, rather than the core arc of The Traveler and whatever the hell it’s up to. Long ago, a technology called SIVA was created to help rebuild the world in the event of disaster. Well, spoilers, the world pretty much ended. But SIVA was safely locked away, waiting for the day it could be put to use.

In Rise of Iron, that day has come. Unfortunately, it turns out that emotionless nanotechnology doesn’t make for the most responsible rebuilder of civilization. Placed in the wrong hands (in this case, the Fallen), SIVA becomes a force that must be halted before its influence infects everything.

Rise of Iron’s storyline feels like a vestige of "Year 1" Destiny, and that isn’t a good thing. SIVA’s rise and plot is so poorly explained that even after hours poring over Destiny wiki entries, I’m still not 100 percent sure I have all the details down. I understand the appeal of storylines that play things close to the vest, but Rise of Iron leans so far in that direction as to be incoherent.

I also found it hard to get pumped about taking down a mindless nanotechnology, which regards you and dirt with the same level of fascination. I learned to hate The Taken King’s Oryx through his actions and giant scary face. Hating SIVA felt like hating malware on my computer. There’s just less intensity there.

Worse still, the humor and character building in Rise of Iron feels like a huge step backward. The Taken King’s sassy Nathan Fillion-voiced Cayde-6 and the comically downtrodden Eris Morn have been replaced by a far less interesting cast. Lord Saladin, the centerpiece of Rise of Iron, is a gruff, no-nonsense soldier who informs you on a need-to-know basis and may as well be a forgettable sergeant from Call of Duty Whatever.

For this and other reasons, Rise of Iron’s campaign is hardly worth a mention, easily finished in under two hours. An exciting tank battle and a surprising final boss fight are a mere 10 minutes of that campaign, with the rest of it failing to stand out in any exceptional way. The bulk of it feels like filler, which is ironic considering the short length.

Equally lacking is an activity known as Archon’s Forge. Described as a mix between Prison of Elders and Court of Oryx, Archon’s Forge is an enemy-filled arena where your fireteam can join up with other random players to take down increasingly difficult nasties.

Archon’s Forge has numerous problems. For one, there’s no thoughtful way to team up with others beyond the three in your fireteam. On higher difficulties, groups of six or more are basically required. With no matchmaking system, you just have to sit around and hope that other random groups show up in the Forge, which, for some reason, is located as far away from the initial landing zone as possible. To pile on, starting a challenge in the Forge requires a resource that you can only carry one of, and once you and your group run out, you have to leave and find more. And even if you do manage to succeed, your reward in the Forge is, more often than not, a big goose egg. Nada. Nothing.

I could forgive the above, but the biggest sin of Archon’s Forge is that it’s just dull. There’s no real thought in the encounters. Court of Oryx and the bosses of Prison of Elders introduced puzzle-like twists that required different strategies to succeed. The only strategy in Archon’s Forge: kill everything that moves. It’s mindless chaos, which is fun for a little while, but gets old quickly.

The expansion does have some strong points, though. Structured side missions that lead to exciting exotic weapons (including the infamous Gjallarhorn) are interesting and rewarding. There are also three new strikes (one brand-new, two updated), all of which are enjoyable additions to the existing batch. These new activities do a better job fleshing out the world of Destiny than the campaign and provide a nice respite. 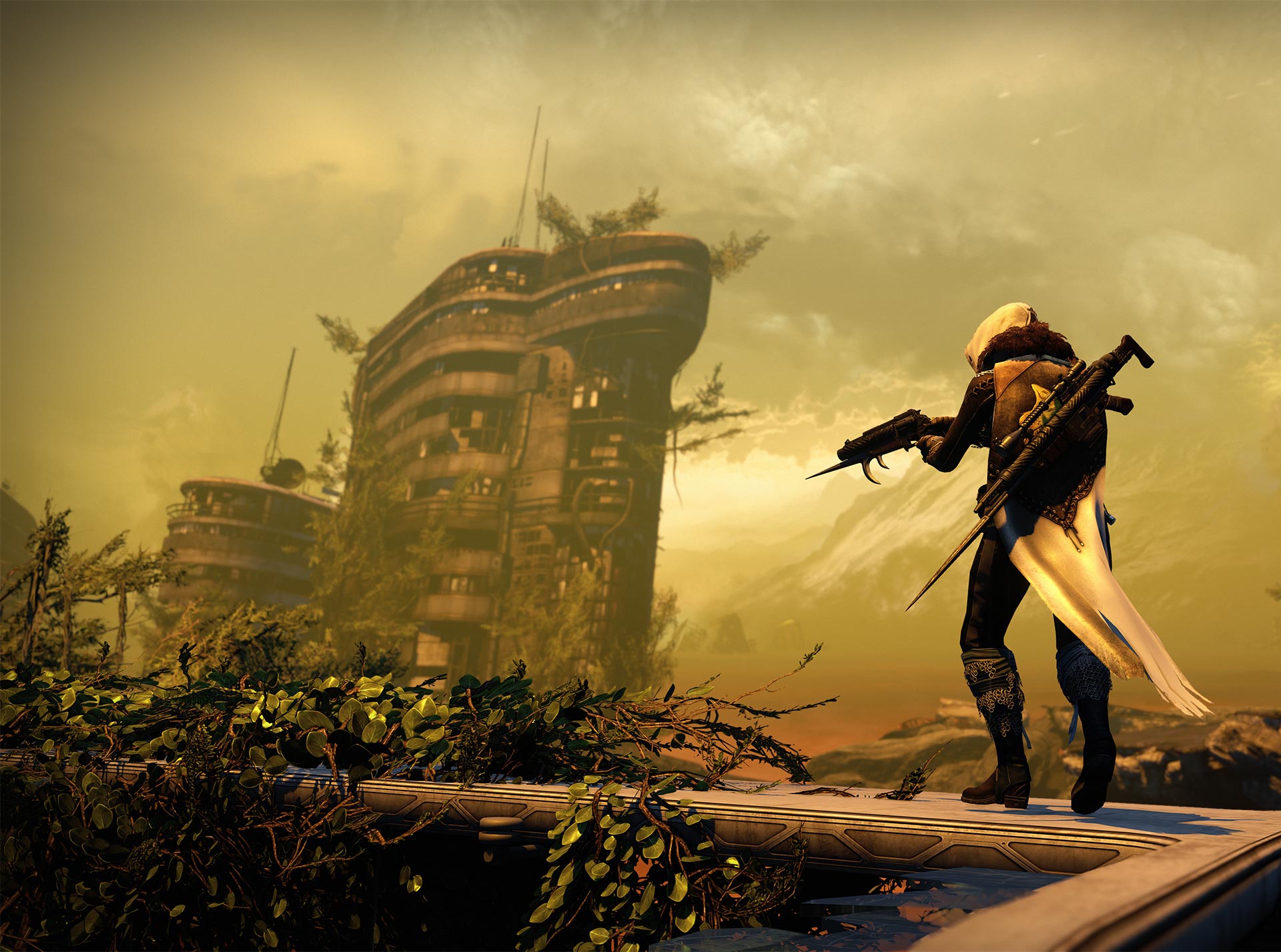 Rise of Iron introduces some significant improvements to the competitive multiplayer experience of Destiny. The biggest of these is the ability to set up and play in private matches, which was shockingly absent until now. Destiny multiplayer has a reputation for being unflinchingly unwelcoming for new players, but being able to hop in a game with just your friends, rather than a gaggle of kids with no jobs and insane reflexes, is a huge relief.

The multiplayer is enhanced by the addition of upgraded artifacts. These grant new abilities, like an unlimited sprint and a detailed radar, that increase the ways you can differentiate your loadout for your play style.

A new mode, Supremacy, has also been added. In a conceptually fun twist on deathmatch, you must collect engrams from fallen enemies for your kills to count. Supremacy is welcome but it may need a few tweaks, since many matches are currently devolving into shotgun sprees. But if you’re coordinating with a group of friends, picking up dropped marks in a strategic squad, it can be a delight.

It’s in these strikes and side missions that players can start to experience the magic of what Destiny has become after two years of evolution. The core shooter mechanics remain strong and satisfying, but they’re backed by tons of content to keep you busy. There’s always a carrot in Destiny, pushing you toward that next rank-up package or vendor purchase, and Rise of Iron offers the most enticing carrots the series has seen so far. Sure, getting to the highest Light levels and endgame content is a grind, but the path there is no longer so dreary that you can’t enjoy the trip.

Those willing to put in the time will be rewarded with something truly excellent.

Wrath of the Machine is the best Destiny raid yet and is easily one of my favorite video game experiences this year. Like the Vault of Glass raid, which was so much better than the rest of vanilla Destiny, Wrath of the Machine elevates the Rise of Iron expansion significantly.

The ambition that seems to be missing from the rest of Rise of Iron has been laser-focused into the raid. One encounter in particular, which calls to mind the outsized vehicle combat of Mad Max: Fury Road, is so risky and impressive that I was stunned that Bungie was able to pull it off (ditching last-generation consoles certainly played a part). And even though that centerpiece battle steals the show, the entire raid feels fresh and exciting. There’s bomb tossing, boss slamming and weird hidden puzzles to unearth. It’s also far more welcoming for new players than previous raids, with a forgiving introduction that slowly ramps up to a wicked crescendo.

Rise of Iron can be something more than run-of-the-mill, if you can get there

Destiny: Rise of Iron doesn’t seem too concerned with setting itself apart. The uninspired campaign and thoughtless implementation of Archon’s Forge make it feel like Bungie’s just filling time until Destiny 2. But thanks to the Wrath of the Machine raid, Rise of Iron is more than a passable footnote. It’s something greater — if you have the patience to get there.

Destiny: Rise of Iron was reviewed in part at an event held at developer Bungie's headquarters in early September. Additional time was spent with a retail version on PS4 provided by Activision. You can find additional information about Polygon's ethics policy here.