An hour with Gears of War 4’s new Horde Mode

Share All sharing options for: An hour with Gears of War 4’s new Horde Mode

The lines to play Gears of War 4 snaked through the Washington State Convention Center for nearly the entire weekend of this year’s PAX West. That’s because The Coalition hadn’t simply brought a small, vertical-slice demo for fans to play. They brought a fully functional Horde Mode 3.0 — the latest version of the multiplayer mode that typifies the Gears of War experience.

Polygon played two complete sessions, once on the Xbox One and once on Windows PC. So how does it stack up? So far, it’s fantastic. But it’s also not what you remember. 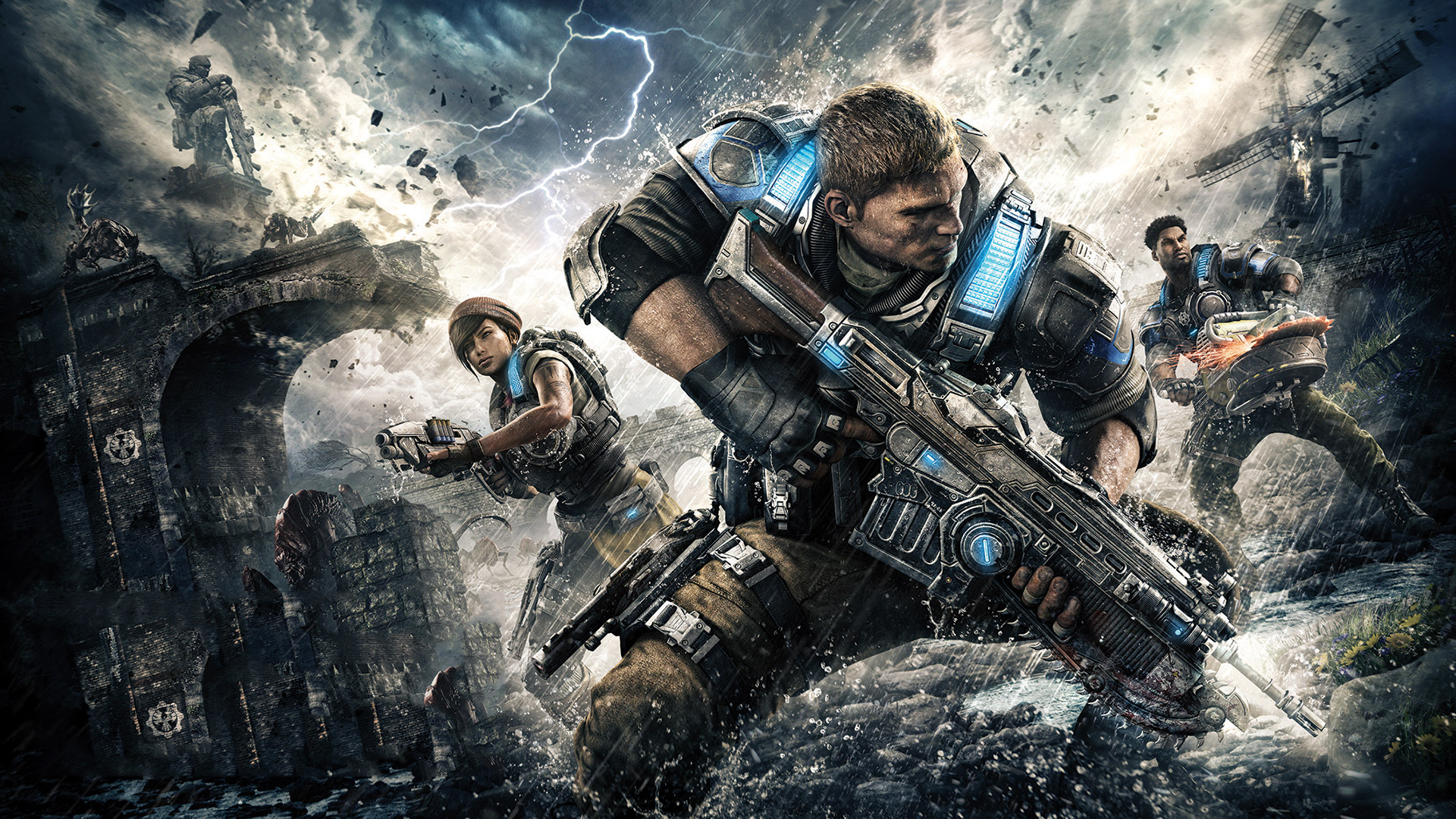 Gears of War 4: Refining a classic

As a concept, Horde Mode seems simple. Players jump into a single map and survive wave after wave of increasingly more difficult enemies. But Gears’ brand of husky ranged and brutal melee combat, combined with the ability to both revive allies and execute wounded enemies, always made for an exciting experience. For many, myself included, it was the very best part of each game in the series.

What always struck me about Horde Mode was how egalitarian it was. You were fighting back-to-back with other players who had exactly the same in-game abilities. The only differences were with individual player’s skills. From session to session, it was a combination of solid communication and last-ditch heroics that saved the day.

Horde Mode 3.0 changes some of what made previous incarnations so unique by adding a class-based character system for the first time. But, says Ryan Cleven, lead multiplayer designer on Gears of War 4, it’s not just a me-too addition meant to ape other modern titles. Classes are designed to enhance things that players were already doing organically in previous versions of the game.

"We’ve got five classes; soldier, sniper, scout, heavy and engineer," Cleven said. "The scout is super important because he’s going to have to range across the map to pick up items. He partners well with the engineer, because the engineer is going to get bonuses to building and repairing."

As he explained them, I began to recall old runs of Horde Mode I’d made in Gears of War 2. The new classes mirrored almost exactly the same kind of division of labor that was necessary to succeed in that version of the game. With only 30 seconds or so between waves, only by splitting up all of the maintenance that needed to be done could you prepare the battlefield for later levels. And only by creating a sort of defense in depth could you hope to do enough damage to the enemy to stay alive. Specialists naturally gravitated to their favorite weapons.

"In Gears of War 4," Cleven said, "in order to be able to achieve higher levels of play that engineer is going to be running around, repairing all the fortifications because it’s way cheaper to repair than it is to rebuild. They’re also going to have benefits to building, so the scout and engineer sort of work in tandem.

"The soldier, the heavy and the sniper are sort of our DPS classes. The soldier is all about the core Gears mechanics — assault rifle play, staying in cover, using grenades. They get a lot of bonuses to do a lot of damage using the classic play, while the heavy embraces larger weapons. They’re going to pick up mulchers, they’re going to pick up the new salvo or the boomshot. Anything big that does a lot of damage. Good AOE, good crowd control.

"Lastly is the sniper. So if you’re really good with precision weapons the sniper’s the class for you. You get perks for landing those headshots, which are really key to later waves."

Before each match, teams of five players can spend a few moments in the lobby selecting their class. In my demo the voice chat was still active, so we could discuss strategy before we even began the game.

Adding nuance is a series of skill cards for each class. There’s three skill slots to start, with two additional slots opening up at higher levels for a total of five. Skills are class specific and play to each of one’s strengths.

For the scout, there were bonuses that gave increased health along with bonuses for doing close-up work with the shotgun. They made players like me, who were naturally inclined to range deep into enemy territory and along the flanks, more durable and more deadly. The other class that I played, the soldier, had an interesting power that allowed them to plant multiple grenades on walls and other structures, letting them create small kill zones meant to slow down enemies in their field of fire.

I can easily see how earning more experience with a certain class could earn players more interesting and powerful skills, and it seems like Horde Mode’s inherent replayability will only be enhanced by it. But the class system never felt limiting. Everyone can pick up a sniper rifle, not just the sniper class, and even the engineer’s unique repair tool can be purchased and used by other classes once a match begins.

But Horde Mode 3.0 has more than just one trick up its sleeve.

"In Gears of War 2, one of the things that allowed people to succeed was the way that they would grief the AI," Cleven said. "They would exploit everything that they could find. They would look for boomshots and they would plant them all over the map, try to find places to block the AI or ... pick up items that were important to them and hold them over the garbage-collection boundary.

"It was about finding those little edge cases that would create these emergent strategies."

The Coalition studied those strategies, and tried to find ways to enhance them by clever changes to gameplay. One of those ways was in rethinking the use of fortifications.

"In Gears of War 3, fortifications were placed at locations that the level designers thought were sort of the right place to put them," Cleven said. "We felt that this gave each level pre-prescribed strategies. So what we wanted to do with Gears 4 is really embrace that idea of emergence and almost formalize it, to make it something that players can more easily explore.

"We’ve gone back and added a new device called the fabricator — kind of like a military-grade battlefield 3D printer."

Every enemy you kill will earn players credits, but they’ll also drop a pile of credits on the ground. It’s up to the scout, and anyone else left running around on the map, to collect those credits and bring them back to the fabricator. Once credits are cashed in, they can be turned into barriers, weapons and other defensive structures.

Then, players can place them wherever they want.

"You can walk up to it and you can build fortifications that you want to build," Cleven said. "And you can place the fabricator on the battlefield wherever you want. You can pick it up and move it around.

Players can move fortifications — even their base — anywhere around the map.

Gears of War 4, Cleven said, will launch with 10 multiplayer maps. Each one can be played in Horde Mode, and each one has multiple viable locations to place your base.

But it’s more than just turrets and decoys. There’s also a weapons locker.

"The weapons locker goes back to that idea of emergence," Cleven said. "It doesn’t sound as sexy as the other fortifications, but what it does is it allows you to place weapons that you think are important into it so they don’t get garbage collected. And whatever you put one in there is going to get rearmed. So you can put weapons in there during the early waves that you can then pull out on waves that you think are going to be harder."

But above and beyond the structural changes, Gears of War surprised me with a great new selection of weapons. Among them is the Overkill, a high-end shotgun with a brutally fast rate of fire. Working with a four-round magazine, the gun fired twice for each pull of the trigger — once on the depress and again on the release. I used it to great effect to walk fire up taller enemies, stunning them with the first shot and hitting them in the head with the second. For fans of the torque bow, there’s also the EMBAR. It’s a charged shot sniper rifle that requires some rhythm and timing to get right. But once you do, it punches through even the toughest helmeted head.

While the Xbox One version of the game seemed to have a slightly lower framerate than the Windows PC, both performed well. In my first game I had a bit of trouble using the cover system and the melee abilities, but by my second session the muscle memory began to come back. Gears of War 4 feels solid, especially for a game that launches simultaneously for console and PC in just a few months — on October 11.

There’s so much left to explore in this version of Horde Mode, and I’m eager to play more.