Gravity Rush 2 is a game about throwing yourself off of buildings for a good cause.

It’s not the first of its kind, of course. The original Gravity Rush was director Keiichiro Toyama's action-adventure breakout from horror games such as Silent Hill and Siren, and one of the better games on the PlayStation Vita. Or at least so I'm told — I missed out on the Vita, and even on the PlayStation 4 remaster of Gravity Rush. But Gravity Rush 2 moves the physics-based action adventure to the PS4 exclusively, allowing me and plenty of other players to experience series hero Kat’s adventures.

The game's central mechanic is its defining characteristic: Main character Kat can control how gravity affects her and things immediately around her. She decides which way is down, so she's never flying — she's falling. Gravity Rush 2 builds a world around the ways Kat can bend and break that basic law of nature, and the game has a dizzying number of ways and reasons to use Kat’s powers. Even when the game falters or frustrates from a technical standpoint, Kat's story, and the world she lives in provide a much needed counterweight.

Gravity Rush 2 begins with Kat swept away from the setting of the first game, set down in a new place, full of new faces, and without her powers. As a newcomer to the series, I got to learn how the world works through Kat's enthusiastic and slightly naive eyes.

The lower levels of the strange planet that Kat inhabits, where people in deep-diving armor mine for ore and shadowy monsters called Nevi float and slither through the landscape, have the fantastic, semi-psychedelic alien beauty of 1970s sci-fi art. High above those strange geometries are floating islands that hold the cities of Jirga Para Lhao and Hekseville, bustling and bright city architectures that have almost endless details to explore and discover in every direction. Flying — or rather, falling — through them feels like exploring a living version of the art of Moebius or Miyazaki. It's enough to give a head rush — literally.

It was dizzying work to find new directions to fall in. Keeping yourself oriented as Kat zips through the sky and the definitions of up and down are constantly changing can be very difficult, especially at first. In my first evening with the game, I had to take frequent breaks just because my head was spinning. I adapted eventually, but people prone to game-related motion sickness could be very easily overwhelmed by the constantly changing camera perspectives.

The combat in Gravity Rush 2 is vigorous and vertigo-inducing. Kat's moveset is simple; in the air or on the ground, she can kick, use her gravity powers to toss debris, or use the occasional high-powered special attack. Kat's primary enemies, mysterious monsters called Nevi, have the same fascinating and alienating aesthetic as the landscapes they inhabit. They're oily and shadowy at the same time, creatures with red eyes in strange places and way too many tentacles for my comfort. I loved how each different type of Nevi was almost something familiar — a fish, a horse, a bird — but always so fundamentally weird and threatening I needed to find a way to kick it apart as quickly as possible.

Combat is quick — when you've found a rhythm and the camera is working with you, bouncing between land and air to kick Nevi in their weird non-faces is thrilling violent ballet done out in three dimensions. As the game progresses, Kat gains the ability to change to different styles of gravity — Lunar, which makes her light, fast and agile, and Jupiter, which makes her heavy and powerful. Switching between these styles at will to find what suits you and the situation best keeps the combat fresh and challenging. I got a particular enjoyment from discovering I could use Kat's gravity powers to pick up enemies and launch them at other enemies. While I did sometimes long for lock-on targeting when the camera was serving as a sort of meta-enemy, when the combat works, it works. 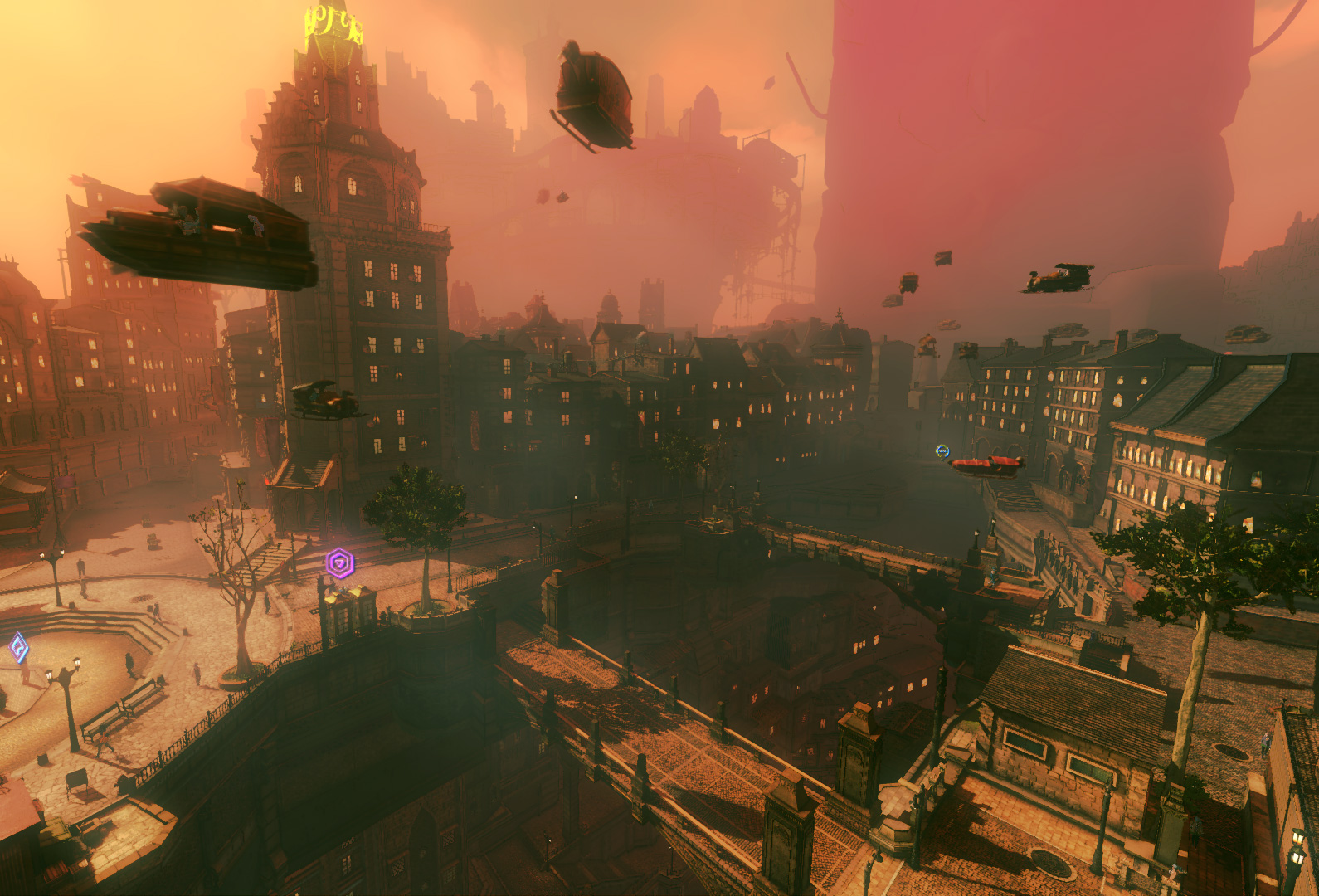 Gravity Rush 2 is not a multiplayer game, but it does have interesting online integration. If you play online, you'll occasionally get notices for treasure hunts; accept and you'll be placed in an area in the game with a photo taken by another player somewhere in the world that shows you where to find the treasure. Find it, and you get to take a picture hint yourself, which then goes on to another player in the world. These hunts were a fun way to familiarize myself with the different parts of the city, and the rewards were the kind of silly extras I always end up hunting down in a game -- extra costumes, character poses, and furniture for Kat's home.

For the combat to work, the camera needed to be top notch — and unfortunately, it frequently just isn't. I spent my first several hours of the game struggling to find just the right setup of the camera control schemes that made sense to me on both solid ground and when falling through three dimensions, and 40 hours later, I still wasn't sure I'd quite gotten it right. The game supports camera control via the motion sensors in the DualShock controller, which sometimes felt natural and helpful, but just as often felt like it was working against me, especially during combat.

Frustration I found during some heavily combat-driven main storyline quests was offset by how much I enjoyed the many, many side quests that the people of Jirga Para Lhao and Hekseville have to offer. I lost hours to these, wrapped up in helping people and learning more about the world in the process. The sidequests of Gravity Rush 2 use Kat's gravity shifting powers in fun and creative ways. She might fall through crowds and buildings delivering newspapers or sales pamphlets; chase and capture a cargo thief or an author on the run from his editor; or just spend a day in the park playing fetch with a dog. Not all of the side quests are hits — some speed-based and stealth-based ones were just not my cup of tea. But it felt good in general to play out Kat's eager enthusiasm to better the world.

Kat's story starts small, just the interpersonal conflicts between her and the people of the mining fleet that she's made a new home with. Each section of Gravity Rush 2 feels separate but still connected, like different storylines in an ongoing comic book series — an intentional move, as the story is told through cutscenes made up of comic book panels. More than once I let out a genuine gasp at a story turn shown only with static images and word bubbles.

The depth (and height, and width) of Gravity Rush 2's story kept me going, but my lack of knowledge of first game did hinder me in the second half of the game. The latter parts of the game bring in a number of pre-existing characters -- almost all of them female, which thrilled me, even if I didn't already know who they were. While at no point did I feel lost, I could tell that there were plot moments that just didn't have the same impact on me that they might on someone familiar with the series. But, hey, Gravity Rush Remastered is waiting for me if I really want to fill in those story gaps.

Gravity Rush 2 manages to land on its feet

Coming in fresh, I found Gravity Rush 2 so bright and original that I'm still playing it, even after the end credits. Gravity Rush 2 has its stumbles — the camera often feels at complete odds with what the game requires of you, a real problem in a game that so aggressively eschews standards physics. But even with so many directions to fall head over heels in, it lands on its feet — just like Kat.