A bridge too far

Raid: World War II was made by Lion Game Lion, a studio with experience making mission content for Payday 2. The gameplay is very similar to that popular shooter: Players choose from a list of missions to run, and by running these missions over and over, they level up their characters and unlock new weapons and outfits. It’s all fairly straightforward.

Once in a mission, the tension rises slowly at first. You’ll make a stealthy approach to the objective — a rail yard, a bunker or a vault full of stolen gold — which is usually followed by a brief firefight and perhaps another few minutes of running around flipping switches or finding items.

After that, all hell breaks loose.

Your team of four will gun down many hundreds of German troops on every map. These enemies will stream in, a platoon at a time, from off screen or around corners. They will drop from the sky comically on stiff little parachutes. They will drive themselves to battle in sad little trucks and, at times, they will leap from the bushes all around you.

These enemies show little, if any, intelligence. They line up — sometimes in convenient, single file lines — and rush forward to be executed. The biggest challenge in every mission is finding enough bullets to kill them all. The most dramatic moments are rushing out from behind cover to find unopened crates or scour the ground in no-man’s land, frantically hammering the action key to find ammunition.

Often, while I was scavenging like this, a pack of German soldiers would simply crowd around me, following my every move and firing away with automatic weapons. My life bar would go down slightly. Occasionally they would cause my character to stagger. When I found a fresh bandolier or box of ammunition I would reload and spin around in place, carefully mowing them all down. It was repetitive, and it was boring.

While Raid is primarily billed as a multiplayer game, you can go out on missions with up to three other AI-controlled teammates. There’s a radial menu for giving commands, but in my experience the AI response wavered between sluggishness and absolute indifference. They crouched in cover at the edge of the map while I moved stealthily toward the objective, only running after me once they heard gunfire. Once I “went loud” the AI did a decent job of firing back at enemies, and even resurrecting me when the need arose. But Raid is best experienced with other, human-controlled players at your side.

Even when executed well, missions tend to drag on, with wave after wave of soldiers coming at you for minutes at a time. Unfortunately, that means you have to spend an extraordinary amount of time with the game’s four main player characters, none of whom seem to ever stop talking.

Raid suffers from some of the worst writing I’ve heard from a video game in the last decade. Each of the playable characters has a single defining quirk. The American soldier says “fuck” a lot. The British guy makes jokes about tea. The Russian soldier is barely literate. The German is a traitor to the Third Reich who has only joined up with the allies for the money. Their barks are repetitive, unfunny and far too frequent.

They aren’t the most aggravating aspect of Raid’s writing, however. Some of the most insufferable bits of dialogue come from actor and comedian John Cleese, who couldn’t even be bothered to phone this one in. Cleese plays a special forces handler back in England, and shows up in full-motion videos before missions to struggle through a series of repetitive, half-hearted pep talks. Each one feels generic, as though they were written and performed long before the game’s missions were even created.

There’s also another series of full motion videos that come after missions. These feature an actor dressed like Adolf Hitler and another as his subordinate. They make a passing attempt at slapstick comedy. Occasionally Hitler will shout at you in German, or make an obscene gesture. They provide neither catharsis nor comedic value of any kind.

While neither the gameplay nor the writing are particularly enjoyable, I’m sad to say that Raid also features some spectacularly bad rigging and animation.

Arms don’t bend at the elbow so much as they fold over on themselves, creating parts of the body that are nauseatingly sharp and thin. When a player is mortally wounded — which happens only rarely — they recline on the ground as though preparing to be fed grapes. Armed only with a stand-off pistol, wounded players can fire back while they wait for an ally to rescue them. Their player model is left to swing their one arm and head around wildly while the rest of the figure sits stock still. It’s common to see them clipping through their own bodies to fire back through their own shoulder.

This horrifying vision of downed players is just one example of the myriad ways in which Raid appears to be unnatural or downright broken. Enemies clip through walls regularly. The game’s physics cause ragdoll corpses to tumble gruesomely down flights of stairs, smacking their heads on railings, which can be occasionally satisfying in its goofiness. But the physics are also inconsistent. When you carry dead Germans to hide their bodies, they appear to have the same mass as a sack filled with damp cotton balls.

The biggest problem I had reviewing Raid was simply finding enough people to play it with. For a moderately-priced title on Steam, shortly after the initial release, that’s a pretty bad sign. The community, so much as I’ve interacted with it, seems immature, unfriendly and generally pissed off at the state of the game. I tend to agree with them.

Raid: World War II is a clumsy, incomplete game that disappoints on every level

Raid: World War II disappoints on all levels. It’s not that one thing in particular is badly broken; it’s that so many aspects of the game are clumsy or incomplete. It made playing the game a chore, even in its best moments. Sometimes a terrible movie or game will still have things that make it enjoyable — hilariously cheesy dialogue or over-the-top action that I end up liking in spite of the low budget or poor production values. With Raid, there’s just nothing here for me, and I can’t imagine there being much here for anyone else. 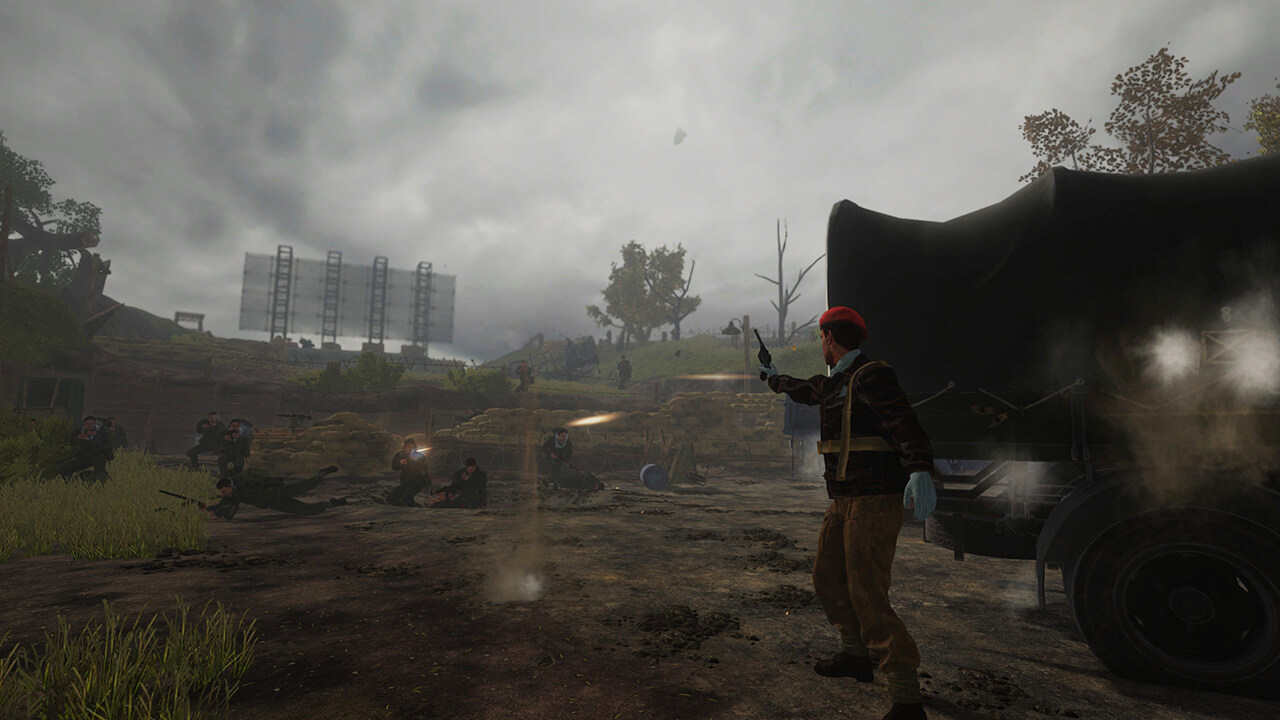