Whether you care about Gundam or not, this fighting game deserves a look

Review and information for Gundam Versus

Gundam Versus is about the thrill of gliding, feather-light, in a machine the size of an apartment building.

I dart in and out for position, I dodge enemy beam fire by inches, and I step, fake, and spin circles around my opponents in close combat. I’m threading the needle through chaos at a speed nearly too fast to think. When I finally find that perfect moment to fire back, my reaction is pure instinct. The buttons press themselves. After winning a close fight, I often let out a sigh of relief as I realize that for a moment there, I wasn’t breathing.

Add a teammate and two other players in zippy robots that want to kill you, and you have a breathless nail-biter of a fighting game, a recipe for the flow state. Matches end in two or three minutes, which is why one is never enough. You don’t need to know a thing about Gundam for Gundam Versus to work its magic.

This line of games, but a tiny branch of the incomprehensibly large merchandising empire attached to the Gundam sci-fi anime, is actually nearly 20 years old. Gundam Versus’ level of polish and absurd lineup of 94 playable Mobile Suits (the Gundam multiverse’s proper name for its war machines) comes in large part from a very long arcade run which never left Japan.

Considering the large roster, it’s surprising that very few of these suits feel similar to play. This isn’t a simulation, but a free-wheeling arcade game that presents its suits in the spirit — but not to the letter — of their animated counterparts. Drawing on 40 years of Gundam TV series and movies, cartoonish, avant-garde and toy-commercial aesthetics all clash on this battlefield. Fans of the source series will be pleased that Bandai Namco has gone above and beyond to include not just the main character suits, but several notable units from any given anime. (And yes, all of the Gundam Wing boys are on hand.)

Character types are so varied that there’s likely to be something that plays exactly to your personal style. Whether you’d like a long-range gunner, a brawler, a transformer, a pirate or a ninja, choices are abundant. The game values flexibility, encouraging players to have a stable of favorite suits that they change between depending on the situation.

The issue is that this makes Gundam Versus’ select screen nearly as intimidating as that of League of Legends or Dota 2. Beyond vague “shooting” or “fighting” labels, the only way to find out whether a suit is easy to play or made for experts is to get in there and mess around with it. I have personally been playing this game for months before this review (it came out in Japan in June), and I am still in the “experimenting with the roster” stage. I suspect I will still be there in three more months; there’s always something new to discover.

No matter what suit you choose, this is an intense, demanding game designed for speed and precision. The pace of the game is as fast as the players can move, and the faster player typically wins. In the space of two seconds, a player might dash in, let off two shots with different weapons, switch their view to the other enemy and dodge an incoming beam shot. The clicking and tapping of my arcade stick sped up to a machine-gun pace in Gundam Versus, as I was constantly moving and reacting. The game demands deep concentration and fast reflexes, but the controls offer the hair-trigger response speed that you need to keep up.

Single combat in Gundam Versus is intense, but this game really shines in the two-on-two team format. The simple addition of just one teammate adds layers of metagame while still keeping the match tight and focused. Do your suits complement each other? Who’s taking the front line and who’s going to lay down cover fire from the back? Are you keeping your mind on the whole battlefield rather than just the enemy in front of you? Team play is vital: Knowing how to protect your teammate when they’re in trouble is at least as important as doing damage, and lone wolves who overextend themselves will always lose to a coordinated effort.

Coordination is a necessity, and in the odd absence of team voice chat (offloaded to PlayStation 4 parties) the game has a “communications” button carried over from the arcade environment. Press the comm button plus a direction and you’ll immediately send one of four customizable phrases. The phrases are all directly practical, like “I’m going ahead” and “withdrawing,” allowing you to reflexively inform your teammate. It’s built for speed and efficiency, and the canned phrases allow you to effectively communicate with players speaking other languages. (This was a big deal when I was playing the Japanese version.)

Another interesting wrinkle of team play is the point system. The Gundam multiverse has a whole range of fighting machines, from mass-produced grunts to the cutting-edge prototypes that typically headline a Gundam series. For balance, there’s a cost system: Each unit costs 200-500 out of a pool of 1,000. Higher-cost machines are straight-up better than lower-cost ones: They have more HP and better weapons, and they’re faster, stronger and more versatile. However, if your team’s total cost is under 1,000, you effectively get extra “lives,” as dead units will respawn with HP corresponding to the remaining cost. When a team’s cost is fully depleted, the game is lost. This asymmetrical approach to character balance strongly encourages players to communicate, compromise and choose a balanced lineup with a stronger unit and a weaker unit, mixing up the metagame further.

This version of Gundam Versus also adds three-on-three play, for players who wish to throw themselves into total chaos. In three-on-three combat, it’s a lot harder to keep track of what’s going on. The trusty “switch target” system starts to get confusing, the maps are generally too small for this many killer robots, and it’s much harder to see where attacks are coming from. The mode is an experiment that needs some revision to really work.

The other experiment in Gundam Versus is the addition of strikers, partner units you can call out during the fight for a single attack. Like three-on-three, it feels very experimental, with a massive roster of possible strikers, but lack of variety and balance in their attacks. Up until a very recent patch, a few strikers were so powerful that they rendered most of the others pointless.

Once you get a feel for the strikers system, you’ll probably want to test your Mobile Suit skills in multiplayer. Gundam Versus offers solid standard online modes. You can jump into the casual or ranked queue and immediately be matched up with random strangers, or you can join a player lobby, where up to 16 players form teams (randomly or not) and fight forever. The biggest problem with Gundam Versus’ online play is that the matchmaking doesn’t discriminate between high and low connection speeds, frequently tossing players into miserable, unplayable games that usually end when someone mercy-quits the game.

Unlike in previous series entries, there is no local multiplayer in Gundam Versus, not even split-screen or LAN play. At a local fighting game tournament we needed to set up four PS4s with monitors, get them online with an ethernet hub, set up a private lobby and invite all four machines. Unless you’re willing to go that far, Gundam Versus “couch play” involves passing the controller back and forth.

Given all the work that we did on our local setup, it would have been nice to capture video of the proceedings, maybe even stream. Unfortunately, Gundam Versus blocks all PS4-native video capture and streaming — a bone-headed decision in a genre that thrives on community and information sharing.

While Gundam Versus was built for multiplayer, it doesn’t leave out solo players like many other fighting games do. In the absence of a story mode, the arcade-style Trial Battle offers a wide variety of single-player campaigns against the computer. Ultimate Battle adds customized leveling up and some fun bonus games. Both of these modes are pretty meaty, and actually consider what would be fun for solo players rather than just throwing them something to keep them busy. For Gundam fans in particular, they’re also home to massive Mobile Armor bosses who are too huge to appear in the proper game, like the Psycho Gundam and the Dendrobium.

In fact, there is a lot of Gundam lore in here for fans to enjoy despite the lack of a straightforward story mode. Players who understand why Char would yell “Lalah Sune could have been a mother to me!” when he powers up will definitely enjoy the loving attention to detail which will slip by non-fans completely unnoticed. The game incorporates callbacks to Gundam history constantly, whether in the maps, the copious character-specific (untranslated) voice-overs or even particular attacks drawn from famous scenes of the series. Remember that time Kamille stole a robot just to try and step on a guy? That’s his super move in this game.

It is its own kind of fan service that there is a big emphasis in the roster on minor and obscure suits, but it is a bit of a squeeze that so many fan favorites, from series like Seed Destiny and the latter half of Gundam 00, are missing. It doesn’t take a Newtype psychic to predict that beloved suits like God Gundam and Strike Freedom will one day play into Gundam Versus’ aggressive DLC plan. Additional suits past the base 94 are released frequently and cost $5 a la carte, with no bundle or season pass discount available. Though Gundam Versus ships with more action figures in its toybox than one person reasonably needs, it’s also looking to bleed Gundam fans dry $5 at a time. And I know us. It’ll work.

Even non-Gundam fans can enjoy Gundam Versus’ well-crafted gameplay

Gundam Versus has really cut into my fighting game time. It appeals to me for many of the same reasons that more conventional fighting games do: a laser-sharp focus, the layered and complex mechanics, the mind games and the sheer speed and intensity of the battle. That it involves giant battling robots is just the cherry on top. Much more than a licensed game functioning as a box of fan service for existing Gundam cultists, Gundam Versus is a fresh, well-crafted fighting game that’s worth your attention whether you care about Gundam, the fighting genre or both.

Gundam Versus was reviewed using a final “retail” PlayStation 4 download code provided by Bandai Namco Entertainment as well as many hours spent with a Japanese copy of the game purchased by the author. You can find additional information about Polygon’s ethics policy here.

Our review of Gundam Versus 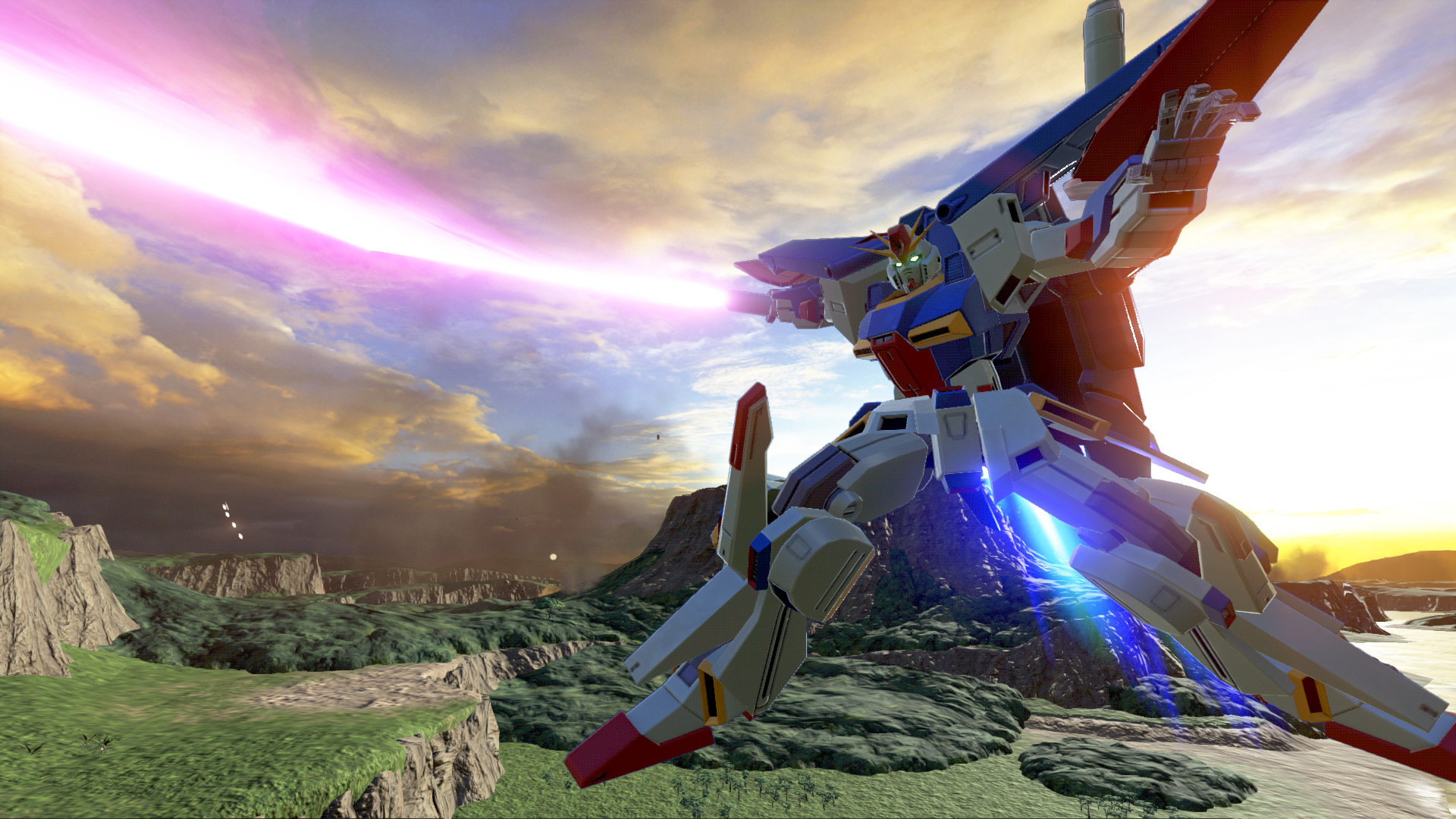