Doom on Switch: Beware if you have tiny bird hands

Can the wee-handed among us enjoy an FPS on the go?

Share All sharing options for: Doom on Switch: Beware if you have tiny bird hands

The Nintendo Switch is a hit, thanks to its hybrid functionality and impressive slate of first-year games. But there’s one genre the platform has yet to prove itself with: first-person shooters. Doom, launching tomorrow, is the first. But can id Software’s ultra-fast, demon-ridden jaunt really hold up on Nintendo’s itsy handheld? The answer is yes ... but with big caveats.

One of the big reasons I was interested in Doom on Switch is the prospect of playing it in handheld mode, on a bus or subway. But upon picking up the console, playing Doom this way was pretty miserable for me.

It’s not Bethesda’s fault, it’s Nintendo’s. The location of the right analog stick, which you use for all of your aiming in Doom, is placed in an awkward position if you have smaller hands. Using it occasionally in Breath of the Wild or Splatoon 2 for camera adjustment was fine, but it’s far from precise, forcing people to use the gyroscopes for more precise aiming. Doom’s constant need for accuracy would make gyroscope aiming a nightmare, so all you really have is that right analog stick to control where you look.

Even without the game you can see for yourself: Pick up a Switch in handheld mode and try to accurately use the right analog stick without bending your thumb at an awkward angle. For folks with smaller thumbs, like me, the best I could manage was to use the crook of my thumb joint. But I could never find precision that way. If the analog were shifted up to where the face buttons are, it’d be great for Doom, but then games like Super Mario Odyssey that predominantly use the face buttons would be a pain for me. 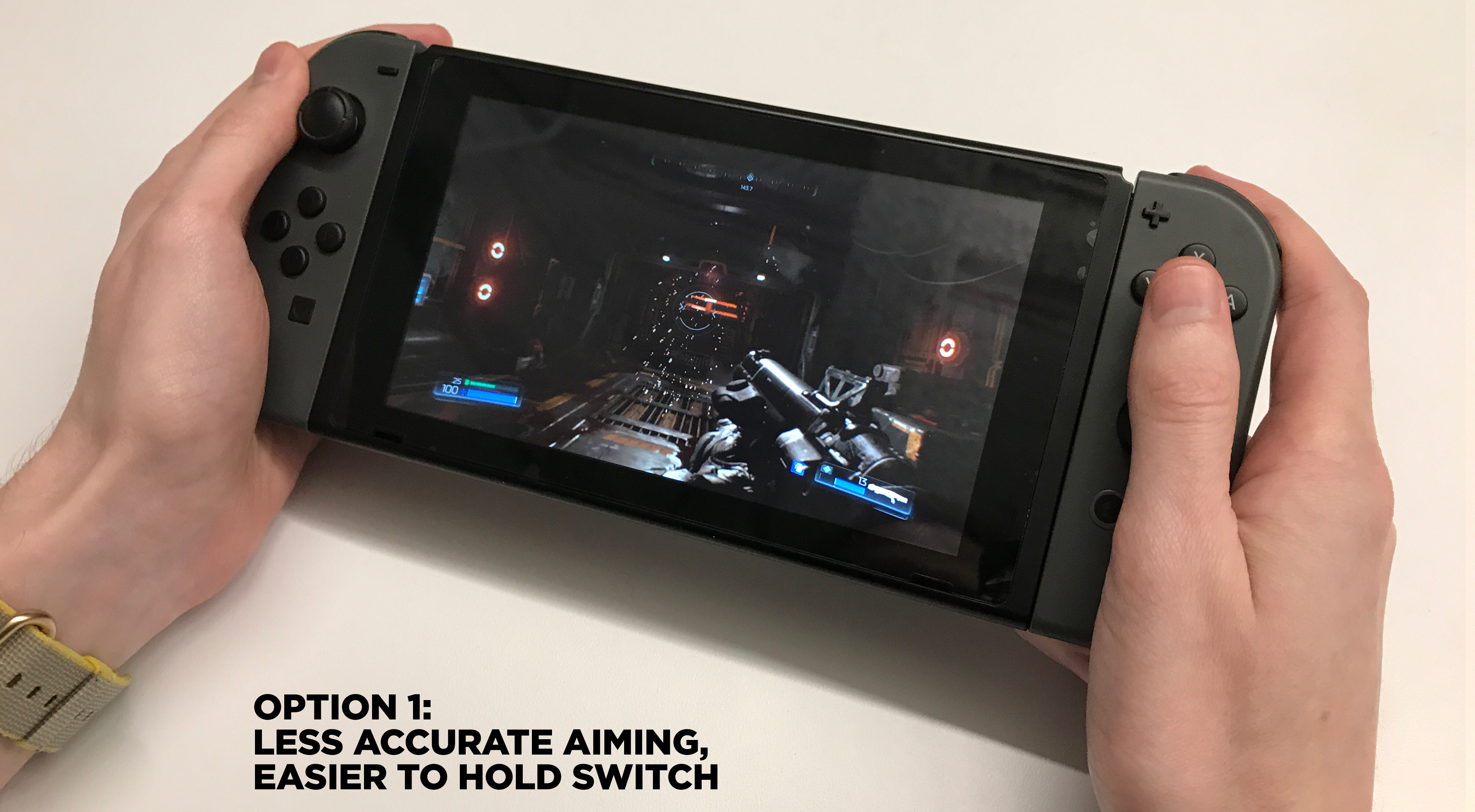 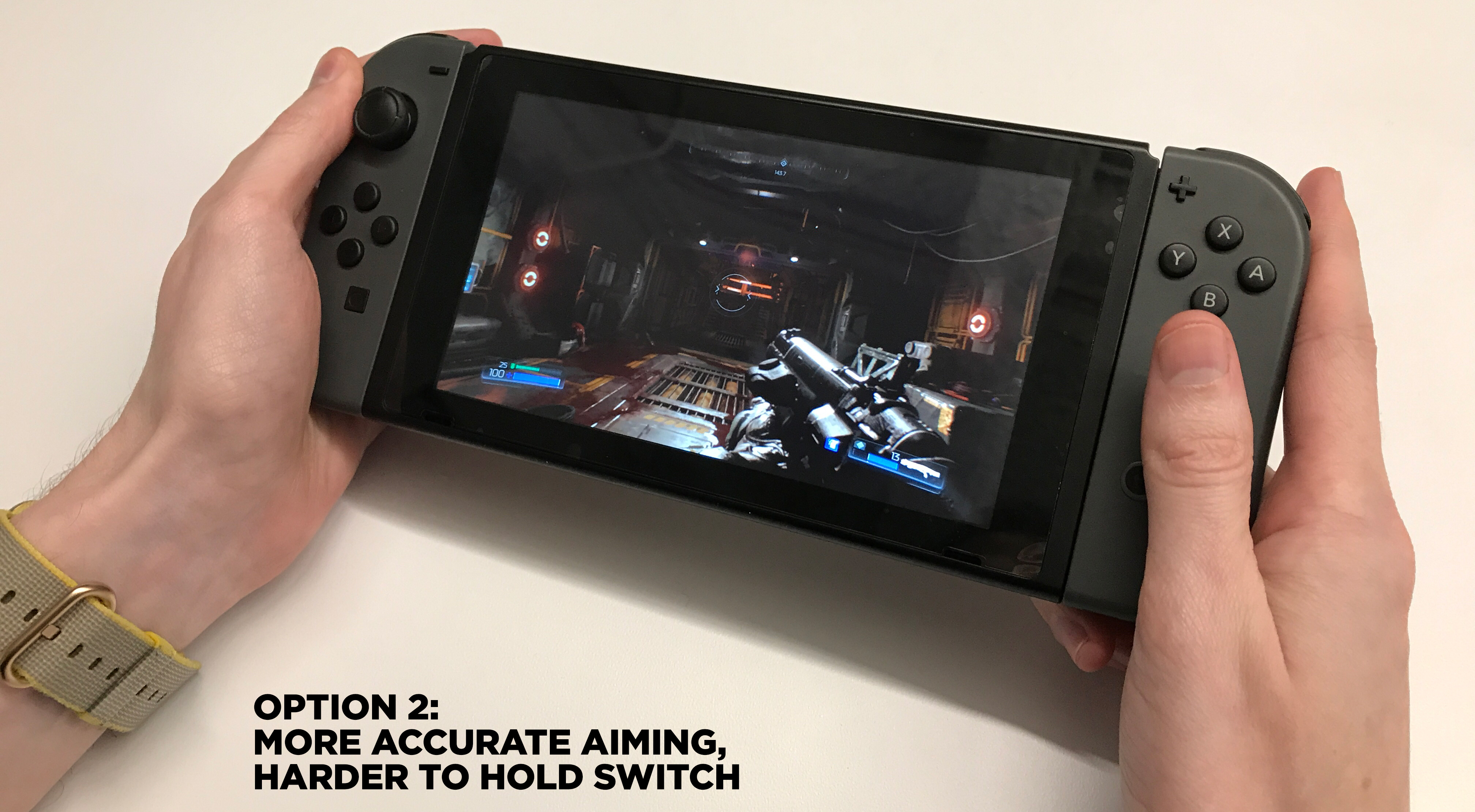 In the case of Doom, my solution was simple but far from perfect. I basically had to shift my right hand down the side of the console, resting the middle of my thumb in the center of the analog stick. Then I had to reach with the tip of my index finger to hit the right triggers. You can see what I’m talking about above.

The same issue arose when I disconnected the Joy-Cons from the Switch. I was forced to hold that right Joy-Con in a funky way to make the aiming work. I actually found it even more uncomfortable than handheld mode.

I had similar struggles with Splatoon 2 and the tank sequences in Super Mario Odyssey. But in all of those games I had the gyroscope options to fall back on. For Doom, it’s the analog stick or nada.

Other members of the Polygon staff voiced similar complaints about the controls in handheld mode. It should also be noted that Polygon’s own Michael McWhertor, whose thumbs are comically large (Ed. note: I have completely average, normal-sized hands and fingers. — McWhertor) compared to my baby thumbs, had no trouble with the controls. But he did seem to be the exception, at least in our small sample size.

Once you start working with larger controllers, the issues begin to vanish. Using the Joy-Con Grip that came with your console made Doom very playable, and with the Pro Controller I had no control issues whatsoever.

The other big caveat is that Doom definitely takes a graphical hit on the Switch. In addition to running at 720p in both handheld and docked mode, the game is locked to 30 frames per second, rather than the original’s 60. The textures and level of detail also take significant hits when running on the Switch, giving the gorgeous game a muddier, blander look. There’s no doubt these consolations were needed to be made to get Doom running well, but it’s a rough transition for those that played the original version on next-gen consoles or PC.

If you’re excited about the prospect of playing first-person shooters on Switch, Doom is a good bell-weather. Personal physical limitations and hand size seem to be the biggest variable when it comes to enjoying the genre. But even if hands are perfectly built to slaughter demon hordes, you’re still going to have to swallow some iffy visuals.