Night in the Woods review

Share All sharing options for: Night in the Woods review

At one point a few hours into Night in the Woods, I almost attempted to weasel my way out of doing the review.

Thank goodness I wasn’t successful, or I would have missed one of the most moving game narratives I’ve ever experienced. I enjoyed Night in the Woods a lot more once I stopped waiting for the game to start.

From the moment 20-year-old Mae arrives in the dilapidated mining town she calls home (having inexplicably bailed on college) I was impatient to get to the real meat of the story.

Sure, it was pleasant enough watching Mae leap around Possum Springs, chatting up friends like Bea, a squandered genius stuck managing her dad’s store, or Gregg, an up-for-anything anarchist that clashes beautifully with his boyfriend, the more buttoned down Angus. I even found myself repeatedly chatting up the more ancillary (yet surprisingly well-realized) denizens of the town, something I don’t normally go in for.

But all the while, there was a nagging impatience for the real game to start, the big earth-shattering moment that sets the narrative to a sprint. But Night in the Woods seemed maddeningly content to just keep ambling.

There is a connecting narrative in Night in the Woods and rest assured: It goes to some fucking places. Existential terror, the nature of God, the terrible burden of being a human, it’s goes to all the places.

But the bulk of the experience isn’t so overtly monumental. It’s a quiet game, woven from small scenes between friends enjoying each other, hurting each other, reconciling and attempting to move forward with what remains.

These scenes are, without exception, written beautifully. Even when the dialogue veers too cutesy, it feels true to a group of characters straddling a gap between adult and childhood that seems precipitously wide these days.

Those characters are the game’s biggest strength. They’re all damaged in different ways, but in very believable, understandable ways, ways we’re all damaged. But each of these anthropomorphized animals also have more heart, depth and decency than most games boast in their entire human cast.

Oddly, the one character I wouldn’t extend that last compliment to is Mae, Night in the Woods’ feline protagonist. She is often selfish, cruel, self-absorbed and destructive in ways that may be believable and relatable but rarely ever pleasant. Mae is somewhat redeemed by a childlike joy in simple pleasures, a streak of loyalty to her friends and some late-game realizations about her own failings, but only somewhat.

After a scene where Mae belittles her parents for working for years so they could afford to send her to the college that she had just bailed on, I found it pretty difficult to re-engage with her. But I’m also a parent and feel a lot further from Mae’s side of the kitchen table than I used to.

It’s a bold choice to center a game on an unlikable character, and it’s an effective way of highlighting the virtues of the supporting cast. But the behavior of those other characters towards Mae, the way they work to preserve their relationships with her, makes me wonder if the game’s developers were fully aware of how grating their hero can sometimes come across.

I realize I’ve largely focused on the narrative of Night in the Woods, but only because there’s not much to discuss from a mechanical perspective. It’s sort of a platformer, and you’ll spend a lot of time leaping from rooftop to rooftop. There are some one-off minigames, and a few that you’ll return to like shoplifting and playing bass in Mae and Co.’s band.

The minigames are perfectly adequate, but getting around the world often slows down the pace of a game that isn’t exactly hurtling along to begin with. Mae also does some platforming in her sleep, and these dream sequences in particular are dull, especially late in the game when the story starts to pick up momentum. They’re nice to look at and (like the rest of the game) beautifully orchestrated, but still dull.

The gamier aspects of Night in the Woods aren’t its strength, but it does make good use of being interactive. The fact that you can largely choose which characters you want to interact with -- and how frequently -- gives the connections you build a more personal feeling. Perhaps it’s the fact that you’ve searched them out, as opposed to having them forced on you.

In fact, much of Night in the Woods is preoccupied with just that question: What are we forced into and what can we choose for ourselves? There are no pat, easy solutions to that query contained within. But the answers that are unearthed are terrible, beautiful and achingly humane in a way that brought me to tears more than once.

Our review of Night in the Woods 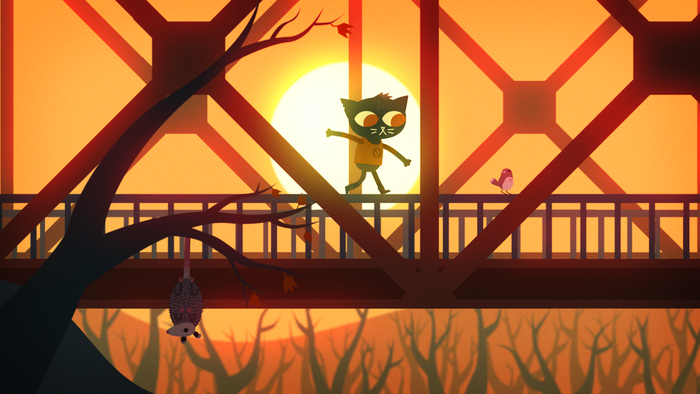 Night in the Woods was reviewed using a "retail" Steam key provided by Infinite Fall. You can find additional information about Polygon's ethics policy here.