Review and information for Thimbleweed Park

The first thing I did in Thimbleweed Park was to tick off a box in the option screen, alongside the regular settings for subtitles and background music, that said "toilet paper over."

This set all the bathrooms in the game to show the toilet paper in the (correct) position, and all I could think was, "I'm home." I grew up playing LucasArts adventure games, like Maniac Mansion, and the first two Secret of Monkey Island games, noted for their humor, pixelated art, and devious logic-bending puzzles. Thimbleweed Park is designed for people like me, for whom clicking "use [x] on [y]" is second nature. Thimbleweed Park is a point-and-click adventure game about point-and-click adventure games.

Thimbleweed Park was funded on Kickstarter in 2014 with a call out to classic adventure game fans who wanted a true return to the genre, from those who helped to created it -- Ron Gilbert and Gary Winnick. Their promise was a true spiritual successor to games like Maniac Mansion, and they've made good on that. It's a creation formed from fondness for the games that came before it, successfully tickling point-and-click nostalgia. But its period faithful design has brought some old-school inaccessibility with it.

Thimbleweed Park takes place in 1987, not at all coincidentally the year Maniac Mansion was released. The game is thick with references both to the decade and to the games that preceded it, and the fourth wall doesn't survive more than a few minutes after the game's beginning. Thimbleweed Park spends its first few hours reminding you again and again that it's an adventure game, just like the ones you loved, either through sly references in background art or in dialogue, or more deliberate and overt ones. Two separate characters take the time to talk about the superiority of the LucasArts "no fail, no death" style of adventure games over the Sierra Online style full of save states, dead ends, and actual death.

It gave me a chuckle the first time, remembering all the frustrating ways I'd met my end in Space Quest games, but the second time it just seemed like unusually old sour grapes. Thimbleweed Park tends to get in its own way with distracting asides like these, forgetting that a reference is just a reference -- not actual humor.

But there is an actual game underneath the Gorbachev trivia and references to purple tentacles, and it does deliver on the classic adventure game promise. The plotline begins with two FBI agents who have arrived in the Twin Peaks-esque eponymous town to investigate a murder. The story shaggy dogs from there, growing ever more convoluted and meta as it adds the other playable characters -- an insult comic clown, a budding game developer (she wants to make adventure games, of course), and a ghost -- each with their own goals, some intertwining and some unrelated.

These multiple viewpoints are a straight lift from Maniac Mansion, and it works. While the different characters don't have particularly different skills, they have different knowledge and limitations. One character might be afraid of heights where another will happily climb, and another might know useful information about vacuum tubes where another is clueless. Some puzzles take multiple characters working together in different locations to solve, similar to the Maniac Mansion sequel, Day of the Tentacle. All of it added together to make clever ways for me to get my brain working in several directions at once to solve puzzles. And, when my brain wasn't quite working, I could quickly switch to a different character to get away from whatever puzzle thread I'd gotten stuck on.

And I did get stuck. It wouldn't be a classic point-and-click adventure game without spending at least a little time wandering around trying to figure out what the hell to do next. Thimbleweed Park gives two difficulty levels at its outset -- Casual and Hard -- that determine how complicated the puzzles are. However, Hard is clearly the way the game was intended to be played.

Thimbleweed Park on Casual feels like a game that has half of it missing -- because it is. Many puzzles and questlines are either simplified or missing entirely, though not all of the pieces of those puzzles have been removed. This lead to me spending a lot of time on my run through Casual mode interacting with items that had no purpose in that version of the game, a whole fish market full of adventure game red herrings. Casual let me have the storyline and the jokes, but the actual meat of the game was missing. Getting the full Thimbleweed Park experience requires the more punishing puzzles of Hard.

Thimbleweed Park's full puzzles are the real deal. While they require some strange twists in thinking, they avoid falling into the trap of impossible logic that some adventure games have become infamous for. While I did spend at least one night staring at the ceiling trying to think through solutions for a sticking point I hadn't tried yet, none of the puzzles hit Gabriel Knight cat hair mustache levels of logical absurdity. Most of the time, when I had a breakthrough on a puzzle I'd been banging my head on, it was because I'd simply overlooked something, or had approached the situation with the incorrect character. I never found myself brute forcing different "use [x] on [y]" scenarios until something clicked, and Thimbleweed Park is blessedly free of any real pixel hunts.

The game improves on the classic scenarios here, cutting away the worst parts of adventure gaming while still leaving challenges that are intensely satisfying to solve. But it's possible that the logic behind Thimbleweed Park’s puzzles only seemed reasonable to me because I've spent so much of my life learning how to think like adventure games want me to. Of course it makes sense that in order to get a set of jeweler's tools from a man dressed up as Commander Riker, the first step is to give everyone food poisoning off of dodgy hot dogs. One puzzle in particular is a direct reference to one in The Secret of Monkey Island; I can't imagine how someone who hadn't played it would figure it out, but I knew just what to do. I've had enough practice at these kind of games that my first instinct is to pick up everything that isn't glued down and automatically try to stick it anywhere that it might fit, without thinking about why I'm doing it. It's an adventure game; it's what I'm supposed to do.

Thimbleweed Park is a game for people who already know what to do. Playing it felt like sitting in front of my old 386, resisting peeking at answers in a hintbook through the red film of a hint viewer -- two things that exist as puzzle-solving items within Thimbleweed Park itself.

The experience of Thimbleweed Park is so drenched in nostalgia that it made me question whether I was enjoying the game for what it actually was, or if I was just enjoying the comfort of having an old itch scratched. In the end, though, I don't think it really matters. While Thimbleweed Park might be alienating to a newcomer to adventure games, that's by design. It's a game that exists somewhere between 1987 and 2017, and for someone with a love of the genre, it feels like coming home.

And then finding the loose brick to push on to reveal the key to use on the front door to get into that home.

Our review of Thimbleweed Park 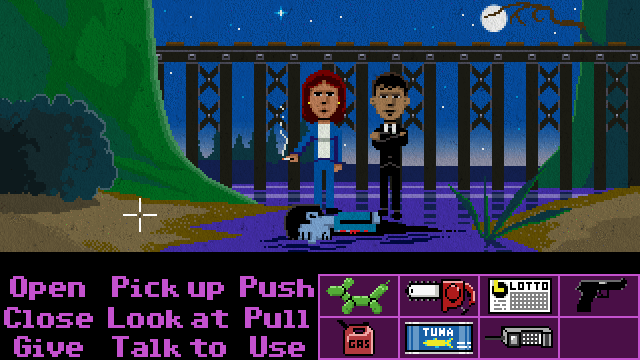