Share All sharing options for: Torment: Tides of Numenera review

The central question presented in Torment: Tides of Numenera is somewhat simple: How much does one life matter?

It’s easy to make assumptions about Torment’s purpose in regards to this problem, since video games have been posing similar questions for years. But what separates Torment is how complicated its answers become. It creates a rich environment to explore, but it forges a scenario that is well-paced to become more confusing as time goes on. Its themes of mortality are not just nagging questions, but the elements that shapes the entire game.

In Torment: Tides of Numenera -- a spiritual successor to the 1999 cult classic role-playing game Planescape: Torment -- you play as the "Last Castoff," a person who used to be a vessel for an immortal being called the Changing God. With the Changing God moved on to a new body, you’re left to shape your own existence, which means that during character creation, you shape not only your stats but your personality. You can’t tweak your character’s physical appearance beyond choosing gender, but you’re taken through a small journey to the past.

Presented with disparate memories from previous lives, you'll have to select how to react. One memory puts you in front of a machine you have to fix while hostiles entrench on your position and you decide whether to repair it or run, for instance. What you choose guides your character's personality and decides how people react to you once you step out into the world.

Torment takes a lot of deep dives into its own history, ensuring that the player can dig up details from every corner of the world if they wish to do so. Developer InXile Entertainment took the time to create backstories for minor characters that have little relevance in the greater plot. There’s a lot of reading involved, with the game providing back story on even minor characters. A lot of it isn’t necessary to finish the story, but considering how large the world presented is, the detail only makes it feel more real.

There’s a lot to see to go along with all that reading. Exploring the different areas in Torment, like the seedy Underbelly or the sentient Bloom, is like taking a detour into the world of a China Miéville novel. Torment is full of diverse groups of seemingly discordant beings that only barely manage to live together and are all alternate takes on fantasy tropes. The Varrenoth, for example, is a giant, muscular robot — called a "construct" here — controlled by a small girl in an act of rebellion. Loss-of-self is a woman on the edge of a cliff that looks oddly like a ghost you saw in a nearby tavern and also like a woman who died when a house collapsed. The Mapper is covered in tattoos that seem to shift and change the more he learns, like his body is a living atlas.

Not all of these characters are associated with quests, but seeing them walk around made me feel more a part of this universe. Learning about all the beings that lived in Torment added an allure and comfort to exploration.

If I have one complaint, it's one of distance — there are so many interesting creatures described in the text box and pictured on screen, but because of the top down, far-away perspective, I couldn't fully appreciate them. They all look human, even when their description tells you otherwise. Similarly, you don’t get to see all of Torment’s world. As hinted at by the game, it would be impossible to see every dimension, every city, every weird mindspace that you might fall into, so the game only gives you a handful of those locales.

Still, Torment does try and make the best out of what it provides, giving you every piece of information on whichever space you’re standing in.

One of the standout locales is the Bloom: a home, a marketplace and a sentient being. The Bloom is able to open portals, essential to trade, but only when you feed its toothy mouths what it craves. Food can be anything from guilt to anger, but it often ends up being people, sacrificed to simply keep the area working. You’ll sometimes be tasked with a decision — feed a person to the Bloom, or sacrifice yourself. You can’t die, but you will lose health or stats, making future encounters more challenging.

Many decisions you have to make throughout the game involve this kind of choice. But in the end, the consequences are small regardless of what you choose — future quests remain largely unaffected and your reputation won’t suffer much beyond a couple of encounters. You only get a reminder during the end credits, when the game reveals what happens to the people you tried to help.

Regardless, while playing, I sought to make everybody feel content, taking on every side quest and opting for non-violent strategies. Torment encourages conflict resolution through dialogue instead of combat. If you come across a hostile group of people, for example, you can persuade or intimidate them out of a physical encounter. Like any action, you can spend points — or "effort" as it’s called here — to increase the likelihood you’ll succeed. So the more points you have in any of the three given traits — might, speed and intelligence — the better off you are.

While Torment gives you the options to bypass traditional combat, that doesn’t mean each alternative is created equal. There are a few plot-relevant battles that you need to engage in, and there are a couple that are much more difficult without combat skills. I remember one particular encounter in the middle of the game where I had to get from one side of the dungeon to the other while trying to avoid swarms of monsters and people looking to kill my party. Because I had been putting all my points into lore and persuasion options, the task was challenging and my first attempt took around an hour. I had to go back a few hours and purchase more combat items to make it feasible.

I much preferred talking my way out of problems, since it usually included having to solve a puzzle or to succeed at a persuasion check. For those who love the dense fantasy lore that goes along with RPGs but can’t stand the slow-moving, turn-based combat (it’s especially slow here and there isn’t an option to speed it up), it’s helpful. The non-violent routes are more challenging and trickier than just slashing your way through conflicts, which is kind of the point, since you’re not a "chosen one" set on saving the world. You’re just trying to survive and finish your own journey.

Torment doesn't sugarcoat it: You can shape events but you can’t change the world — and your actions always have consequences beyond your control. It’s depressing, but effective. Torment: Tides of Numenera is relentless in how it treats its characters and the Ninth World, but that’s what makes it so fascinating. Aside from some issues with encounter balance and my yearnings for more detail, it’s a beautiful, challenging game, content to be ambiguous, rich and confounding in ways that few other RPGs have ever pulled off.

Our review of Torment: Tides of Numenera 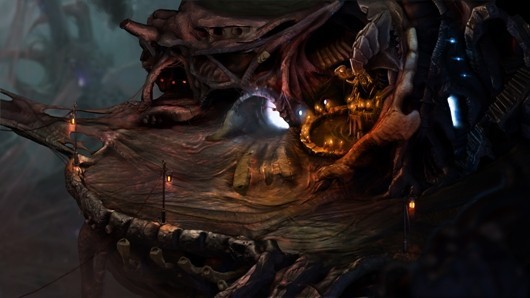