Review and information for Little Nightmares

As I drifted off after an evening of playing the spooky puzzle-platformer, my mind filled with images of unnaturally long arms reaching for tiny hooded figures and I woke with my heart racing. I shook it off easily enough, but those few drowsy fearful moments marked Little Nightmares as a success in at least one aspect: it gave me the damn heebie-jeebies.

Little Nightmares is the creation of the Swedish Tarsier Studios, which previously worked on the far cuter and cuddlier LittleBigPlanet series. For all that Little Nightmares is unquestionably a horror game, there is something a bit precious about it; like Limbo and Inside, it's a game about someone small and helpless working their way through a dangerous and frightening world.

But Little Nightmares is a few shades brighter, with hints of dark humor weaving through genuinely disturbing moments. While I found myself inevitably frustrated as a tiny thing in a world of dangers who died a lot, that irritation was balanced out by how the gameplay kept shifting so I never quite died the same way twice. Little Nightmares is a balancing act: between light and darkness, sound and silence, annoyance and satisfaction.

And, most importantly, it's creepy. It's very creepy.

Stuck in Little Nightmares big dark world is a little girl in a bright yellow rain slicker. Her name is Six — according to promotional materials, at least. Nothing concrete about Little Nightmares' plot appears in text in the game. Named or not, that little girl creeps and crawls her way through a shifting dark setting that never quite makes logical sense, armed only with a lighter.

The game's title is apt here; Little Nightmares follows a dream logic, where each new room might be completely different from the last. I could never quite get my bearings on where I was supposed to be — A boat? A prison? An asylum? A nursery? A restaurant? — and that seems intentional. Little Nightmares kept me off balance by constantly changing the world around me, with only one constant. Every room rocks faintly from side to side, creating a queasy feeling of seasickness that enhances the overall unsettling atmosphere.

This unease and Little Nightmares' grotesque look and feel is where it truly succeeds. The other denizens of Six's world are monstrous, but just human enough. They reminded me of some of the lumpier, less friendly creations of the Jim Henson Workshop, with a sprinkling of Hieronymus Bosch. For all that they made me recoil, something about them was also pathetically charming, all of them too misshapen to quite capture the bright little girl evading them.

That brightness is important, too. There's color in Six's nightmare world, and not just in her yellow coat. Little Nightmares doesn’t rely on a monochromatic palette to achieve its unwholesome atmosphere.The kitchen where Six must hide from two hulking, fat, malformed butchers is well-lit, with splashes of red and yellow and green. When the game is dark, it's for a reason; to have a place to hide, or to force Six to light it herself. Some of the most ominous moments in the game were ones where I lit Six's lighter, casting light on horrors so I could avoid them while simultaneously drawing their attention to me.

Little Nightmares uses sound the same way. I played the game with headphones, giving me the full experience of some really excellent sound design. It's got every nasty creak and squelch down perfectly., But silence plays just as much of a part. When the constant hum of weird and downright gross noises went quiet, I knew something terrible would soon break it.

I expected the bulk of the game would be sneaking and stealthily creating distractions. This would have been entertaining enough, but Little Nightmares constantly changed what it was asking for. The game evolves from evading large dangers to environmental puzzles, like finding the right can to throw at a button, or working a meat grinder to build a swinging rope of sausage. The later stages discard stealth almost entirely in favor of speed to keep Six out of danger's reach.

Platforming is the one element that ties all of Little Nightmares' gameplay threads together, and fortunately the controls are simple to use — as long as you actually use a controller. I played the game on PC, where my initial attempt to play with keyboard controls was brief, frustrating, and full of clumsy deaths. Once I had the controls sorted out, it was smooth going.

Little Nightmares is fairly short — five or six hours max — and that's to its benefit. The challenges never get repetitive, and I never felt like I was just playing through the same puzzles with different coats of gruesome paint. The repetition came when I actually had to learn how to succeed at those challenges. Little Nightmares is a game where you're destined to fail, a lot. An auto-saving checkpoint system is in place, but it's imperfect. I groaned more than once to find myself set back too far, and stuck having to overcome obstacles that I hoped I'd put behind me. When the checkpoints were friendlier, load times had me growling in frustration. Ten seconds added up to a lot of irritated waiting time between failures, especially in the more difficult challenges at the end of each of the game's five chapters.

That difficulty proves key to Little Nightmares’ sense of reward, however. The ending chapter went by so quickly that I ended up replaying it, wondering if I'd missed something, but I realized that it went by so quickly because I didn't fail in it. Dying in Little Nightmares is part of what makes the experience satisfying in the end. Triumphing against the darkness didn't feel as good when I didn't struggle a little to get there.

Little Nightmares worked its way into my dreams because it's just bright enough, just safe enough to make me let my guard down. The game isn’t always successful at balancing some game design fundamentals. But when the lights went out, it left me remembering that, really, I'm just a small thing in a dangerous world myself.

Our review of Little Nightmares 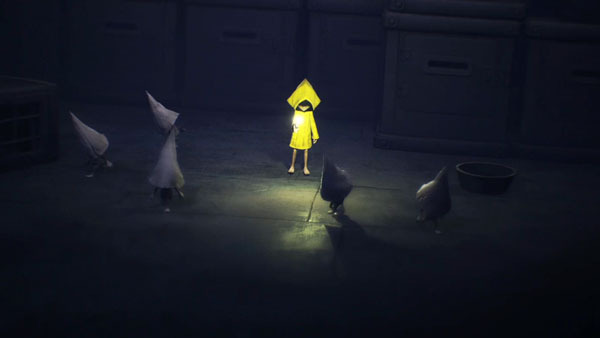