Review and information for Yooka-Laylee

Yooka-Laylee is proof that sometimes our fondest memories should stay in the past.

The Kickstarter success story promised a new version of classic Rare-developed titles from the Nintendo 64 era, recapturing our fuzzy memories of games like the Banjo-Kazooie franchise, with a bit of Donkey Kong 64 thrown in there for good measure. The game’s Kickstarter exploded, setting records for the crowdfunding platform.

Developer Playtonic has been carefully faithful to what made those first games memorable, from the charming main characters to the focus on platforming, puzzle solving and secrets. But well-regarded as those games were, 19 years have passed since the first Banjo-Kazooie, and Yooka-Laylee remains too true to that original formula — even when it means not ditching game design ideas that feel stuck on those old cartridges.

The premise of Yooka-Laylee is exploration and collecting. The game begins as the titular duo, Yooka the iguana and Laylee the bat, realize the book they were using as furniture is an artifact that can rewrite the fabric of the universe — right around the time a comically evil heel, a corporate overlord bumblebee named Capital B, snatches it away. The book’s pages — called Pagies, for an extra level of twee — escape Capital B by scattering themselves across Yooka-Laylee’s five worlds, and Yooka and Laylee will need to gather them all back up again.

These five worlds, each with a unique, vibrant theme, are crammed full of activities and diversions. Every single activity is in service of collecting pages. And those activities get more plentiful after the world has been "expanded" by using some of your Pagies. Those expanded activities are, in turn, devoted to collecting even more pages.

Those include lots of platforming challenges, puzzles, secrets and, you guessed it, other collectibles. You’ll have to dig through each world to find a Mollycool, which can transform Yooka and Laylee into some monstrous hybrid animal or machine; a play token that unlocks a classic game remake; five hidden ghosts that spit out one Pagie when all located; and lots of quills, which can be used to buy new moves.

You can explore these worlds in any way you’d like, which is a huge improvement to this genre’s structure. In older platformers, you’d often be forced to fight a world boss before being able to unlock more areas — in Yooka-Laylee, you’re only limited by the moves that Yooka and Laylee know. That openness is a welcome change, but I felt like every world badly needed a minimap I could refer to, especially when I found myself in random side passages or on top of some precarious platforming structure, trying to remember where something I saw on the last run through was hiding.

The absence of mandatory world bosses is fortunate, because Yooka-Laylee’s combat is a chore. The worst of it is found in the game’s shooting. To get an accurate shot, you need to enter first-person mode by clicking in the left stick. While locked in this mode, you can’t strafe or move at all, leaving you vulnerable in an actual combat situation.

Another wrinkle: Your projectile weapons are only active for a short period after you’ve grabbed "ammo" from berry bushes. Yooka-Laylee often stakes some of its challenge on sometimes making you get to a far-off target before your powers vanish. It’s a common trap that Yooka-Laylee falls into — laborious gameplay alone didn’t make for a sense of reward, or even a satisfying challenge.

For a while, I appreciated the game’s openness. I didn’t have to keep beating my head against things that felt like chores — like having to ferry pigs dressed as knights across the map after Yooka and Laylee had been transformed into a helicopter — because there were plenty of choices. New worlds, which also contain new abilities, don’t take many pages to unlock either, so there was a lot of incentive to do the bare minimum in each so I could get new skills, then return to previous areas once I had a fleet of techniques available to me.

There are many things in earlier levels locked behind specific skills, and Yooka-Laylee’s most satisfying moments came from using my new tricks in concert to solve sequences of puzzles. All to get that get that Pagie, trapped in a Cagie.

Yes, that’s real. But other tasks were so frustrating I wanted to scream — like a gigantic golf game where you have three minutes to push a boulder-sized ball past enemies, over ramps, and through a freaking windmill without it plummeting into actual space.

That’s when I realized I didn’t have as much freedom as I thought. To unlock the game’s final boss, and finish my journey, I needed 100 book pages out of a possible 145. It’s far more than the number you need to unlock and expand all the levels. With 25 book pages on each world, and 20 tucked among the rambling hub, I ended up doing tasks that felt like busy work after I’d cleared all the enjoyable ones.

Yooka-Laylee looks the part of an updated platformer, but some of its mechanics should have stayed back in the era it came from. There was a reason we haven’t seen more games like Banjo-Kazooie on modern platforms, and it wasn’t just because Rare as we knew it was gone; its ideas were very specific to a gameplay era that we’ve evolved past. Fourth-wall-breaking dialogue, shiny characters and lush graphics can’t save Yooka-Laylee from the dated framework that it’s built on.

Our review of Yooka-Laylee 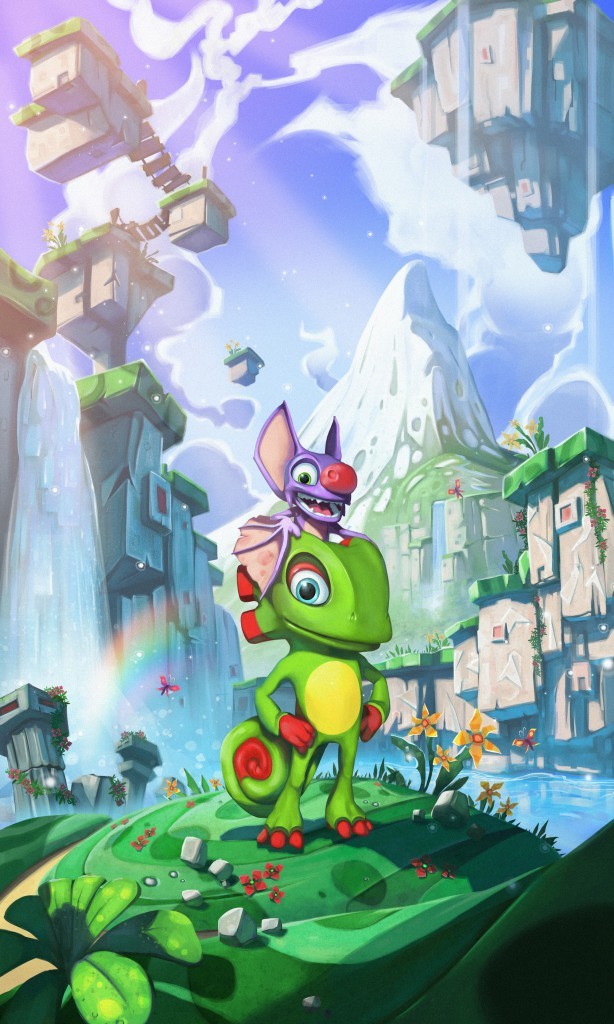