NBA Playgrounds is a brutal game of basketball.

My first online match in the 2-on-2 hoops title made this painfully clear, and exposed an equally painful lack of the free-flowing, rim-rocking, over-the-top action an arcade basketball game should celebrate.

My opponent perched over me during the stupid, unnecessary pause that precedes every inbounds play. This delay gave him all the time in the world to home in and make a ridiculously overpowered shove and separate me from the ball — every time. Seeing my opponent do this with Chris Paul — who punched Julius Hodge in the dick in 2005 — is the only time I laughed, albeit ruefully, while playing NBA Playgrounds.

In offline play, NBA Playgrounds' airborne ambitions still crash into a surface warfare of pushes, swats and steals, thanks to useless AI teammates and deadly efficient CPU opponents. The player's offense is further hamstrung by a strict, unnecessary and rapidly depleted stamina mechanism, plus a stupidly opaque shot-timing, release-point, something-or-other obligation that harkens back to NBA Live 14, which should be specimen A of what never to imitate in video game basketball.

Among the litany of gratuitous fuck-yous that NBA Playgrounds serves to its players, the worst is displaying a scoreboard, clock and shot clock not as an overlay, but as signs on the court itself. They can change location and be obscured, making critical information impossible to locate. This is especially aggravating when NBA Playgrounds cuts the 12-second shot clock in half on a whim. That's a power-up your opponent gets for filling up the "Lottery Pick" meter, which triggers a random super move. I was never inspired to try for this perk myself, because the game selects all of them at random, and their benefits spike wildly, if at all.

And then there's the buzzing of the controller.

Priority A in the next title update has to be completely turning off the controller rumble. Nothing exemplifies this game's inability to communicate its expectations to the player more than that rumble, which would wake a sleeping person even if the television were muted.

The controller rumbles when a player exhausts his stamina, represented as a bar underneath one controlled by the user. Additionally, a player out of stamina will have his meter flash white. This combination of stimuli would suggest to most users that they're in a super-state, ready to slam and jam and throw shit down, because the same thing happens during a dunk. In NBA Playgrounds, it's a painful reminder that you're being punished for no understandable reason.

This effect happens a lot, as simply running a fast break from one end of the court to the other with the turbo (right trigger) engaged will completely run out a player's stamina. Anything other than a basic shot or simple pass requires this juice, even for a 7-foot player standing under the goddamn basket trying to dunk with no one around. I screamed in anguish when George Gervin, one of the ABA's greatest dunkers, went coast to coast and, instead of ramming home an uncontested slam dunk, missed a two-bounce layup as my hand clawed uselessly at the trigger and the X button.

That's because The Iceman had wasted his stamina on the shove, steal and block attempts that are practically mandatory when a user doesn't have the ball. There is no passive defense in NBA Playgrounds; getting in the way of someone does little to affect the outcome of a shot. If you want to defend, you must shove a player, attempt a steal or attempt a block.

Miss any of the above and you are guaranteed a long and uninterruptible sequence as the player recovers. The aftermath of a blocked or a missed dunk is even worse. Switching off a controlled player stuck in a punishment animation is more critical to winning play in NBA Playgrounds than dunking, or anything fun. I have attempted blocks, missed them, had the opponent miss his shot, and then gotten stuck in a recovery animation, unable even to chase down the missed shot for a rebound. The teammate I tried switching to? Thanks to the blithering AI, he was nowhere near the ball.

Missed shots are rare for the opponent AI, even at the lowest of three difficulty settings. For human players, they're much more frequent. There's some kind of perfect timing to releasing your shot that I haven't yet determined. A computer-controlled team has it down pat, frequently scoring an arbitrary "Perfect Shot!" bonus that can turn 2-point baskets into 3 and 3-pointers into four. For the rest of us, the timing is necessary — even on dunks.

AI-dependent moves like an alley-oop also require timing — if you can get one to work at all. I have no idea where I have to stand, or where my AI teammate has to be, to get one to start, which is accomplished by holding down the left trigger and waiting for someone to flash blue. Sometimes they never do. I have no answer why they do or don’t.

AI-controlled teammates do little more than run to random points on the court. I had one stand over me as I dribbled out the shot clock, just to see if he would move to a place where he could shoot or drive. In single-player versus the CPU, AI players rarely rebound the ball unless it lands in their hands. Any movement in the act of shooting puts the player in an off-balance shooting animation that is even more difficult to successfully make.

Online, it is axiomatic that no one in ranked play gives a damn for playing a game that resembles the sport in real life. Winning players find the weaknesses in the video game and abuse them to victory. NBA Playgrounds is no different, and ranked play is the only online mode available at launch. (There is no online play at all on Nintendo Switch). Saber Interactive’s president scoffed at the lack of online play in an arcade sports game, yet released his without the ability to invite a friend to an online match.

Playing someone from a friends list has been a bare-bones expectation of the last two console generations. Saber promises to patch that in later (as well as online play for the Switch), but until it does, users must contend with the sociopaths who have learned they should shove your player on every inbounds pass. Even so, everyone still has to struggle with the ridiculous shot timing mechanism. That reduces the game to a contest of steals and shoves; one of mine saw more than 20 steals, combined, in an unwatchable 24-15 result.

Most of the game is regulated by the rapidly depleting, slowly replenishing stamina meter. I understand why it would be helpful on defensive power moves, to keep users from spamming them. But why does the game apply it to something as basic as dunking, which also requires the same kind of timing as a shot and can be blocked the same as one, too? Rather than attempt anything spectacular, it makes far more sense in NBA Playgrounds to just step back and take a boring mid-range jumper.

For those who find the slugfest gameplay rewarding, there is a very deep roster of more than 150 pros, and some all-time greats (the Kangaroo Kid, Billy Cunningham) that I've rarely, if ever, seen in a video game. To NBA Playgrounds' credit, these can only be unlocked by playing the game; there are no microtransaction shortcuts to acquiring players, basketballs, courts or the other options. Every NBA team has at least three representatives.

Still, some of the choices are strange. Shawn Kemp is, quite conspicuously, a Cleveland Cavalier. I realize players are segmented by team and the SuperSonics do not exist anymore, but this ends up meaningless when players from different teams can be paired up, unlike in NBA Jam. Vince Carter is in the game — as a Memphis Grizzly, where he just wrapped up his 19th season. That means you get Carter at age 40 with a 5 rating in dunk, not the guy who perpetrated "le dunk de la mort," so what is the point? The players also rank up individually, supposedly unlocking new moves, but these are never described to the user, so there's hardly any sense of accomplishment. These moves are also contextual, simple variants of a standard play with the same effect, so it's not like acquiring power-ups or other specific advantages.

Our review of NBA Playgrounds 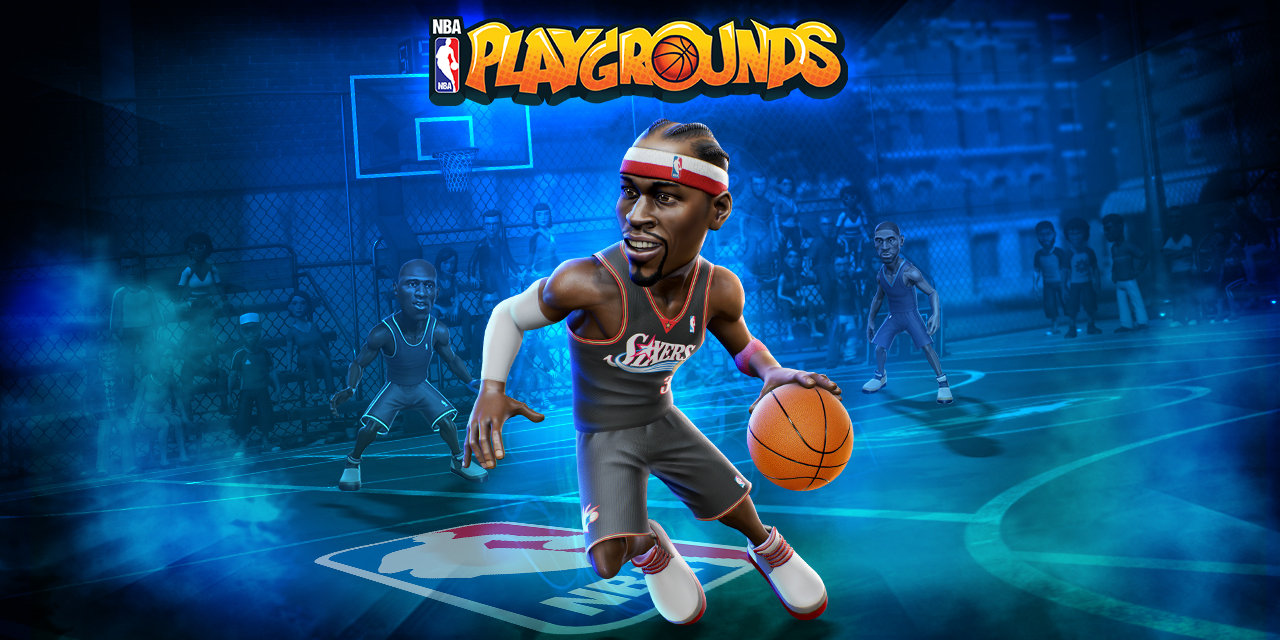 NBA Playgrounds is very nice to look at, and its roster has a strong depth that any basketball fan will appreciate. But rather than build a game with hilarious, rollicking action and balance out how that is scored and defended, NBA Playgrounds imposes condition after condition on the users and cripples any chance at consistent fun. Those who pine for the flame-throwing slams of NBA Jam or the outrageous street trickery of NBA Ballers in days past will have their hopes buried under a pile of bricks by NBA Playgrounds, as their gamepad vibrates like an ignored phone call.

NBA Playgrounds was reviewed using a pre-release Xbox One code provided by the developers. You can find additional information about Polygon’s ethics policy here.