Review and information for Injustice 2

Injustice 2 is an immensely satisfying game chiefly for its standout bad guy: Superman.

While the planet-killing alien Brainiac is ostensibly the DC Universe fighting game’s main antagonist, developer NetherRealm Studios presents Superman as such an unlikeable dick in Injustice 2’s outstanding story mode that beating up the Man of Steel (and his allies) is incredibly gratifying.

There’s such an impressive amount of content — characters, modes, daily activities — in Injustice 2 that it may seem strange to focus on how much fun it is to hate Superman. But I really dislike Superman. And Injustice 2’s single-player campaign is such a noticeable leap forward in terms of quality — and fighting game story modes are kind of NetherRealm’s specialty — that seeing the story through to its end is easily the game’s biggest draw.

Injustice 2 picks up a few years after the cataclysmic events of Injustice: Gods Among Us. Superman sits imprisoned in a red sun jail cell that keeps his powers in check. Batman and his team of reformed bad guys and new allies — Harley Quinn, Green Lantern, Blue Beetle, Firestorm — fight to restore civilization in the wake of Superman’s overreaching control of Earth in the first game. Wonder Woman, Black Adam and newcomer Supergirl work to free Superman in an attempt to fend off a new threat, Brainiac.

Brainiac is here to kill the last remaining Kryptonians (and also destroy Earth), Batman and Superman’s respective ideologies about how best to protect Earth and its people are at the heart of Injustice 2’s conflict. It’s a simpler, more engaging story than the alternative universe-spanning jumble of Injustice: Gods Among Us, and it doesn’t necessarily require intimate knowledge of Injustice’s incredibly strange backstory. That said, brushing up on the game series’ lore won’t hurt.

Like developer NetherRealm’s other fighting games, the story mode is fun, comic book crossover event-caliber stuff in which characters efficiently explain their motivation for why they need to settle their differences in a best of three match. Over the course of 12 lengthy chapters, a mix of gorgeously produced cutscenes interspersed with one-on-one brawls, you’ll get control of about half the game’s roster.

Injustice 2 picks up (Ed’s note: no, literally, real-world years) into an ongoing and incredibly strange alternate version of the DC Universe, one in which Superman has killed the Joker after the supervillain tricked the Man of Steel into killing his longtime love, Lois Lane. The game’s back story, which spans dozens of issues and all takes place prior to the events of 2013’s Injustice: Gods Among Us, is a bizarre, winding story of murder, betrayal, alternate universe Earths and … Superman tweeting out Batman’s secret identity.

While players don’t need to know every detail of the Injustice: Gods Among Us prequel — Injustice 2’s tale of might versus right stands just fine on its own — there are some delightful, fascinating twists in DC’s comic book series.

For a primer on the lore of Injustice: Gods Among Us, read Polygon’s feature-length explainer.

These chapters flow seamlessly from fights to cutscenes and back again to fights. In some matches, you’ll get to choose from one of two characters — Firestorm or Blue Beetle, Green Arrow or Black Canary — and the branching transitions feel surprisingly elegant. Everything looks spectactular. : Injustice 2’s cut scenes are beautifully lit and feature some of the most impressive facial animation I’ve ever seen in a fighting game. And even as the game transitions back to one-on-one fights, Injustice 2 manages to look, well, pretty. That’s not the adjective I’d expected to employ for one of NetherRealm’s titles, many of which are intentionally ugly, gory Mortal Kombat games, but here we are. This game looks really, really good.

Story mode offers a handful of hours of pulpy enjoyment, and there are good reasons to replay portions of Injustice 2 to experience the game’s alternate story paths. It’s also the best way to start leveling up some of the game’s characters while also earning some of the game’s loot, one of the big new additions from Injustice: Gods Among Us.

As players fight their way through all of the game’s online and offline modes, they’ll earn experience and loot boxes filled with random goodies: gear, armor, shaders, character abilities. Those loot boxes come in a variety of tiers (bronze, silver, gold, etc.), and the rarity and quality of the unlockable items contained within depends on the box. Everything contained within can feel frustratingly random — these are video game loot boxes after all — as players will earn gear for characters they may never ultimately play. Injustice 2 will let players cash in their junk gear for credits, however, which can in turn be spent on … more loot boxes.

One downside to a lot of the loot in Injustice 2: it’s gated by character level. During my playthrough of the game’s story mode, I unlocked plenty of level 20 items for Supergirl, Wonder Woman and Batman, a lot of which I couldn’t actually equip for way too long. Fortunately, NetherRealm has done an excellent job of making the game’s inventory and load out interfaces feel elegant. Managing and selling your gear is easy and efficient.

There is some fun cosmetic flavor to a lot of this stuff, so playing DC Universe dress up — while watching stat numbers go up! — still manages to be satisfying, if not entirely consequential. In the end, a lot of the equippable gear, which affects character stats like strength and health, feels like it has little real noticeable impact on gameplay. Most things quickly felt disposable after a new, slightly more powerful, slightly more shiny thing came along in the next loot box.

Injustice 2’s fighting mechanics haven’t changed much from the previous game. Players have an arsenal of special moves and pre-programmed combos at their disposal, and a meter that fills up during battle lets players modify certain moves and pull off flashy attacks (Supergirl, for example, will throw her enemy around the sun and smash them into a giant asteroid). Injustice: Gods Among Us’ Clash system, in which a player can interrupt an opponent’s attack and force them wager a portion of their meter, is also back. It’s still fun to see heroes and villains square off — and talk trash — up close in clashes and those moments look better than ever. Injustice 2 gives players additional options for defense; players can burn portions of their meter to perform an evade roll or recover mid-air. There’s a lot to digest and remember here, and casual players looking for casual fighting game fun may never wind up digging into this stuff. But if you’re looking for depth, NetherRealm provides.

Players can duke it out against one another in a huge variety of modes, including one-on-one ranked and unranked online battles, King of the Hill sessions and local versus multiplayer. The game’s online components performed well during my time with multiplayer, though not without the occasional bit of noticeable, game-pausing lag. NetherRealm surfaces helpful information about your online opponents in multiplayer, including ping and your odds of winning against an opponent, and if someone cancels a match, you’re quickly thrown into another

Offline, players have a lot to stay busy with once they’re done with the single-player story. Most interesting is Injustice 2’s Multiverse mode, in which weekly, daily and even hourly challenges are available to play, each with their own rewards. Fighting game fans familiar with Mortal Kombat’s Living Towers mode will understand what Multiverse mode — pitched as a never-ending series of alternate universe Earths, each with their own particular quirks — is all about. It’s a great excuse to revisit the game every day, multiple times a day.

With Injustice 2, NetherRealm has outdone itself

Injustice 2 is NetherRealm once again outdoing itself. This is the best, most polished, most impressively produced story mode to ever feature in a fighting game. The game’s cast — more than a dozen of which are newly playable characters — is varied and interesting, thanks to additions like Swamp Thing, Supergirl and the Red Lantern who has a blood-vomiting space cat, Atrocitus. Even if you aren’t a diehard DC Universe fan, there’s bound to be someone on the roster you’ll love to play as.

Plus, you get to beat up Superman.

Our review of Injustice 2 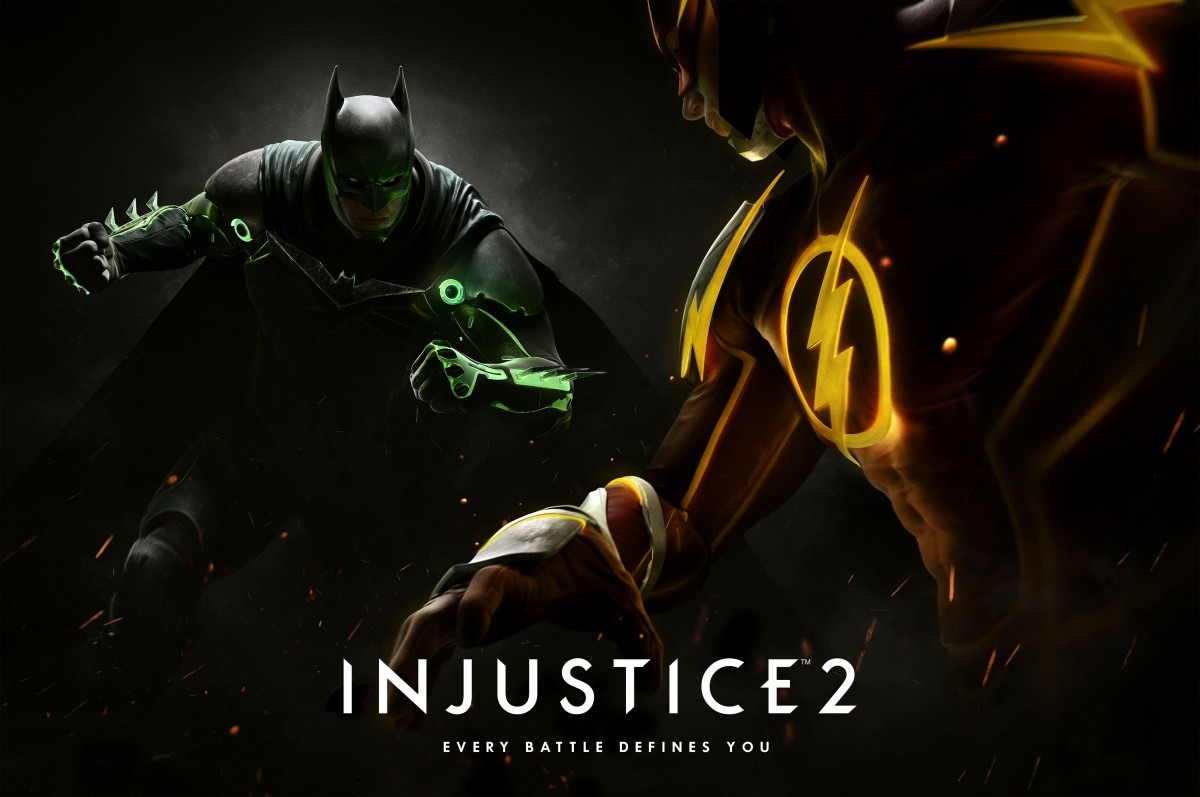