Review and information for Fire Emblem Echoes: Shadows of Valentia

As a faithful remake, Fire Emblem Echoes: Shadows of Valentia is in an awkward spot.

Out of nowhere, Fire Emblem has become one of Nintendo's most visible series. After 2012's Fire Emblem Awakening raised the role-playing games' international profile, Nintendo went from releasing one long, challenging title once every few years to having no fewer than four new games planned through 2018.

Most of these seem pitched at people like me, who fell in love with Fire Emblem for its series-defining battle system, memorable characters and contemporary romance elements. But Shadows of Valentia, the first of these new Fire Emblem games to launch on Nintendo hardware this year, does away with these major features and much else. As a Nintendo 3DS remake of a Famicom game, it rejects modern expectations of a Fire Emblem title. Shadows of Valentia instead embraces its old-school, often obscure trappings, in ways that are usually more frustrating than fun.

Shadows of Valentia is the new name for Fire Emblem Gaiden, the second game in the series. It plays out like a classic role-playing game in many respects, with a heavy emphasis on story. Alm and Celica are childhood friends bonded by a strange mark they each have on their hands, but a brutal war sends them off in different directions when they're still young.

After years apart, they're reunited — each now leading a separate band of fighters dedicated to a similar cause: Alm a rebellion against the regime terrorizing the eastern part of the country; Celica, a more law-abiding coalition of soldiers that want to rescue the religious idol of the west. The tension in their adult relationship drives much of the plot forward.

It's a classical fantasy story in many respects, full of love and death and magic and friendship. Shadows of Valentia makes this plot both meaningful and exciting by mirroring it in its gameplay. Alm and Celica travel separate routes throughout the game. As I switched between playing as one or the other in its latter half, I was never able to steer them toward each other; they were charting their own journeys.

These routes are punctuated by copious battles and just as many cutscenes and conversations. The first Fire Emblem game to feature full voice acting, Shadows of Valentia's high production values are an easy highlight. It was tempting to skip through the lengthy dialogues to get to the action, but the beautiful character art and solid performances often convinced me to sit through these scenes.

As the plot thickened, I found myself more interested in Shadows of Valentia's ample cutscenes than its primary spectacle: the battles. Fire Emblem cut its teeth on strategic battles, with inventive map design forcing the player's hand to build and rebuild teams suited to survive on them. Survival is key in Fire Emblem games; if one of the player's teammates dies in battle, they're dead for good.

That is, unless they're playing on the non-permadeath setting, one of this remake's few conveniences. This can eliminate some of the stress inherent in these battles. Since each and every one of them remains a member of the active party throughout the game, I grew attached to them. No one ever sat on the bench, whiling away.

I could neither bear to see my teammates go away for good nor restart a battle from the beginning so that I could keep them alive, an unspoken inevitability of using permadeath. Unlike other Fire Emblem games with diverse maps with their own fun challenges, Shadows of Valentia's battlefields are a chore to play on. Nearly all the map designs are dull, frustrating or both.

I either had to send my soldiers mindlessly from the bottom of the map to the top, or the right to the left, or I had to escort them slowly over expanses of deadly terrain and an absurd number of enemies. Certain opponents have ridiculous abilities, or are placed in faraway parts of the battlefield.

I found my units dying. A lot. It wasn't just because of this difficulty level, which is forgivable for a game that offers no illusions about how challenging it can be. Shadows of Valentia's highly obscure core systems are the game's real uphill battle.

In order to create the ultimate team, I had to scout out individual teammates throughout Alm and Celica's travels. The game's map is mostly linear, so this shouldn't be difficult — in theory. But Fire Emblem Echoes doesn't make it clear that this recruitment system is necessary, nor does it properly telegraph when and where new characters will be available. It's possible to completely bypass a character who will dramatically bolster your team's defense and be none the wiser until it's too late.

Modern Fire Emblem games have huge casts, so missing one or two fighters isn't the worst thing ever; cast members can feel optional, especially later on. Alm and Celica's parties grow more slowly. There's little diversity to their teammates, and there may be only one member of each party with the spell or skill needed to stand a chance against endgame bosses. I never knew who that party member was, or when or how to find them — and that meant I spent a lot of time either backtracking or repeating tiring fights with an underpowered squad.

It's not always clear what constitutes a well-rounded group of fighters in Shadows of Valentia, even after I successfully recruited everyone available. Shadows of Valentia predates the iconic weapon triangle — which dictates what each weapon is powerful and weak against — in favor of … well, it's not actually obvious what. This took some getting used to, as someone who picked up Fire Emblem more than halfway through the series. Characters that I expected to only be able to fight from a distance can fight up close as well; it never seemed to matter whether a swordsman was up against a lancer, a deadly move in the modern entries.

The game offers some light hints and tips on how to succeed in battle, but for the most part, I was on my own to figure out which kinds of units each of my soldiers were strong or weak against. There's no real religion on this; an archer might fight well against one kind of mage, but face certain death against another. I often looked to characters' basic attack stats and how far they could move across a map during each turn to predict how they'd fare in battle, which isn't the most reliable system. More often than not, I crossed my fingers and hoped for the best when I sent characters up against foes.

I can't fault Shadows of Valentia for not using a battle system that didn't exist yet when the original game was made. But its gameplay feels far less refined in comparison, and I found it hard not to compare. I missed the rock-paper-scissors game at the heart of modern Fire Emblem titles, and realized that its easy-to-memorize dependability plays an integral part in the series' fun.

Even without the context of the modern Fire Emblem games, Shadows of Valentia's battles tend to lack both nuance and, most importantly, strategy. Forgettable battle maps combined with the obtuse battle system meant I spent a lot of time sighing heavily at random encounters, trying to brute force my way to victory. Instead of looking forward to proving my favorite character's strength — and enjoying the beautiful battle animations — I often hoped that my army wouldn't be besieged by yet another random battle on the world map, so that I wouldn't have to blindly crawl through a lengthy fight.

There is at least one strange benefit of this obtuse battle system: It made landing an unpredictably great hit against an impossible foe feel much, much better. The mechanics may be chaotic and inscrutable, but there's still something hypnotic about sending a soldier off to die so that another one could swipe in for the kill. It's hard to embrace ill-defined mechanics in battles of consequence, but in the frequent filler fights along the way — or while level grinding, something I did fairly often — I found fun in being tactically reckless with my teammates.

Shadows of Valentia has a whole part of the game that seems designed to let players embrace their recklessness. The game is unique from other Fire Emblem games in that it has dungeons, which switch from the top-down, 2D view to a full-3D exploration segment. Random enemies crawl the grounds, something that was frustrating on the narrative-focused world map — but in the dungeon, where the only goal is to explore every nook and cranny for loot and bonus experience, engaging these monsters in battle let me enjoy shorter fights without the burden of narrative importance. They're windy mazes that I appreciated for their variation and deviation from the norm.

Occasional towns along the way also help to break up what could have otherwise been a repetitive rhythm of battle-cutscene-battle. These were excellent places for some added character development, and an interesting, puzzle-like examination features makes rooms more than set dressing; they're huge treasure chests to raid.

Shadows of Valentia commits to its dated systems, for better and worse

But these breathers come to feel all too brief over the course of Shadows of Valentia. Make no mistake: This is a game about sitting through cutscenes and playing battles. That gets tiring more quickly than a better-balanced game would — especially because Shadows of Valentia is committed to preserving those same dated systems. Its story was gripping enough to pull me through, but mustering the energy to sit through obtuse battles was Shadows of Valentia’s biggest challenge.

Our review of Fire Emblem Echoes: Shadows of Valentia 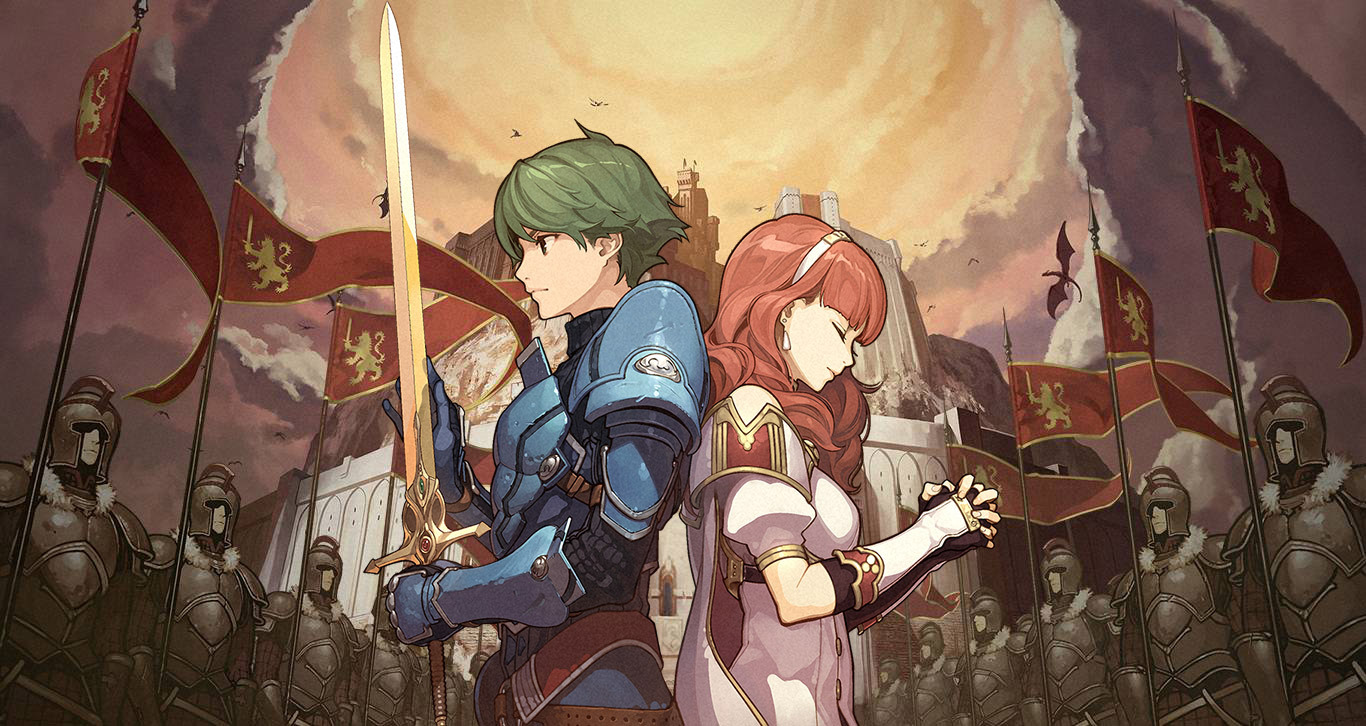