I like just about everything about TumbleSeed except for the act of playing it.

Made by a small group of indie developers, TumbleSeed blends together two quite different inspirations: the tooth-and-nail fight for progress of the roguelike genre, and a classic mechanical arcade game known as Ice Cold Beer. They’re strange bedfellows, and the combination makes for a game that is stunningly singular.

While TumbleSeed has a few clear touchstones, there’s no easy shorthand, no simple way to explain precisely what this game is. In some ways, that very newness of TumbleSeed — that sense of playing something unlike anything I’ve ever seen before — is exciting. But the higher I climbed into TumbleSeed’s world, the more I found myself frustrated by the way it all comes together.

In TumbleSeed, you take on the role of a seed who lives with a bunch of other seeds in a small forest village at the base of a mountain. While the village seems peaceful, further up the mountain, deep into the forest, jungle and desert beyond, something sinister is stirring. Some force is causing giant holes to open in the ground on the path up the mountain, and angry creatures have awoken as a result. The only solution is for you to climb the mountain and fulfill a vague prophecy before your village is destroyed.

I said that you take on the role of a seed, but that’s not entirely accurate. You don’t control the titular tumbleseed itself; you control a long bar that extends from one side of the screen to the other, which must be used to slowly push the seed up the screen. The left and right sides of the bars are controlled independently, so you could raise the left side alone just slightly to cause the tumbleseed to roll slowly to the right. Or you can crank the right side up as far as it will go and send the seed careening in the opposite direction.

This mechanic is the source of a lot of TumbleSeed’s challenge. Having spent over 10 hours with it, I’ve grown to respect it. Moving the bars in order to maneuver the tumbleseed so that it avoids holes, enemies and traps is a serious challenge.

That said, I'm still not sure it's much fun. The best thing I can say is that I improved at this process as I played, pushing myself to climb the mountain further and faster than previous runs. But I never quite shook the desire to just control the tumbleseed directly. There were always moments where I would misjudge the physics, and the little seed would spin out of my control and down a well-placed hole or directly into the path of a giant worm enemy.

You’re not just avoiding things, though, and that’s where TumbleSeed shifts into a real trial of skills. You also need to snake around the board to collect crystal shards that serve as currency in the game. Once collected, these shards can be planted by rolling over special patches of ground, and you’ll receive a reward depending on your seed's current form.

The ability to switch forms is key to TumbleSeed. You start the game with four different seed types that you can swap between on the fly. The flagseed lets you plant a checkpoint you’ll restart at if you fall down a hole but still have life left; planting thornvines will cause a small spear to start rotating around the tumbleseed, allowing you to take out enemies; and so on. Beyond these starting seed types, you can find new, more complicated forms hidden underground as you progress — including some that are just as likely to hurt you as any enemies.

This element of strategy and planning is the most interesting piece of TumbleSeed’s formula. Because I was limited in both currency and number of seed-sustaining patches, I always wanted to plant more than was possible. This forced me to make tough decisions. Should I plant a flagseed because I don’t want to fall down a hole and lose all of my progress? Or should I plant a heartseed because I’m down to two hearts and could die altogether? Even from the start of a new run, I found a lot of satisfaction in testing new tactics, choosing whether to focus on offense, defense or some combination of the two.

Experimenting is fun, but TumbleSeed makes each mistake costly and painful. The game wears the structure of a roguelike — that is, when you die, you go back to the very bottom of the mountain and start over again without any upgrades you’ve purchased or currency you’ve earned, and with the mountain path randomized to a new form. To ease the frustration a bit, the tumbleseed starts each run with three hearts, each one allowing you to fall down a hole or take a hit from an enemy without dying. You can even earn more hearts through planting heartseeds, letting you refill as you progress and inevitably take a bit of damage.

That TumbleSeed forces you to start over when you die isn’t a huge problem; I’ve played and loved plenty of roguelikes, and this one at least puts in a series of quests that carry forward across runs and ensure some amount of slow progress. What’s frustrating, though, is how much the game punishes you for even taking damage. You may not die immediately, but you will lose any of the hard-fought upgrades you’ve earned to that point.

An example: On one run, I decided to spend much of my currency building up a protective layer of spears. I also had an aura — a passive bonus you can collect — that made it so that if I dropped down to one heart, I could plant seeds for free. Moving deep into the jungle, the game’s second biome, I felt set up for success. But in a moment of distraction, I accidentally rolled into a small fly enemy at just the perfect angle that it avoided my spears. I hit it head on, taking a heart of damage ... losing all of the spears I had built up, and dropping my aura as well. I could collect the aura again, at least, but the spears (and all the currency I had spent on them) were gone.

TumbleSeed's summit might be worth it, if you can stick through the climb

The frustration in TumbleSeed seems to be by design, at least, but it didn't feel particularly earned. This is the type of game where you’re meant to die dozens of times, that will take tens of hours to reach the "end," even before taking into account the daily challenges and endless replayability of randomized runs. Between its unique core mechanic and the gorgeous, colorful 2D world it’s built around, TumbleSeed makes a case to spend those dozens of hours rolling up its mountain. But the lack of control over the character mixed with some extremely punishing design choices pushed me away well before I reached the summit, and I can’t say that I expect to return. 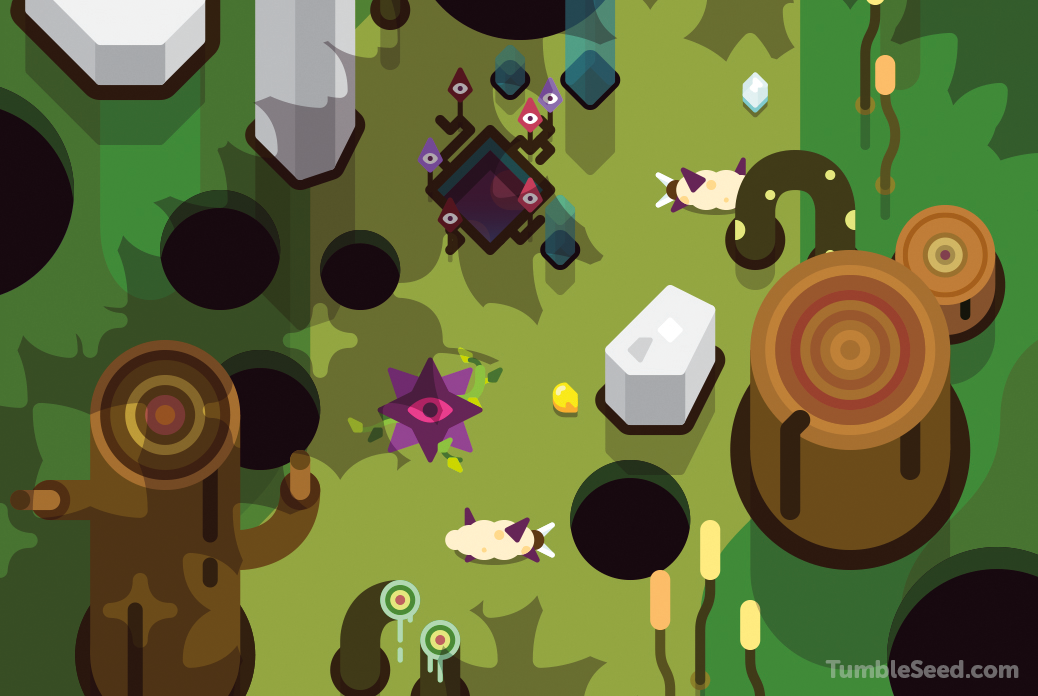