Review and information for Ever Oasis

Ever Oasis is nothing if not ambitious. In fact, its ambition is the biggest thing it's got going for it: It's an action RPG; it's a dungeon crawler; it's a city-building simulation game.

Developer Grezzo and its staff has helped out on several well-known adventure and role-playing games, a compelling resume when going into Ever Oasis. The studio was responsible for the Nintendo 3DS remakes of both The Legend of Zelda: Ocarina of Time and Majora's Mask. Its president, Koichi Ishii, kicked off his career working on the first three Final Fantasy games and later created the Seiken Densetsu, or Mana, series. Grezzo's also made some quirky, original action games exclusive to Nintendo eShop.

As the studio's first big, solo-developed original title, Ever Oasis feels like a mixture of all of these projects. As a big fan of both adventure games and RPGs, I was at first drawn to that combination. But when baked into Ever Oasis, these genres are reduced to their most basic parts — almost always for worse.

"Basic" covers Ever Oasis on nearly every level, from storytelling to gameplay. A young hero of your design must help a friendly water spirit build up a new village, or oasis, after all the others in the land are felled by a mysterious energy known as chaos. It's not enough for this oasis to be built; the hero must also ensure that it's "perfect" by recruiting as many townsfolk as possible, setting up shops, gardening and holding festivals.

This town simulation is endearing at first, if simplistic. It can be fun to take on sidequests from visitors in the hopes of convincing them to take up permanent residence in the oasis. But I grew tired of the repetitive nature of attaining perfect oasis status. The cadence of "new visitor, sidequest, new resident, new shop, etc." became a chore. Those missions were generally fetch quests, and those shops required constant attendance and restocking — so when I say keeping up with them was "a chore," I mean a chore.

Few of these characters you're meant to woo have much in the way of personality, making them all blend together. The city-building's blandness benefits Ever Oasis' other main feature, however. The game is primarily an action RPG, with an expansive map and dungeons to run through. The player controls a party of up to three characters (two townies alongside your hero), each of whom has a unique ability needed to complete puzzles and clear areas.

The only villagers I could tell apart were the ones I battled alongside during dungeons and other combat-oriented quests. I came to care about them as I worked hard to protect them in battles, even appreciating their very occasional quips out of battle because of all the time we spent together. Yet I only could identify them by their skillsets, not by any other, actual traits; they became functional, not familiar. If I had any favorite characters among Ever Oasis' large cast, it was because they were the strongest and fastest in fights.

Being strong and fast is key for the game's various combat missions, because action is a plodding slog otherwise. The real-time battles are fun at first because of the different abilities at play; the hero has a powerful gust of wind that only he can control, while another has a giant hammer that's fun to slam down on enemies. As the amount of enemies I took on increased, though, fights became tedious; the action frequently got chaotic as I struggled to switch between slow-moving characters and pick opponents off.

The three-member cap is a big reason why this became frustrating, not just exhausting. Dungeons are big enough to require a ton of different skills to complete, but with only two swappable party members at my disposal at a time, I frequently had to warp out of a dungeon in order to regroup. This feels like an artificial extension of otherwise enjoyable sections of the game, effectively making me like them less and less with every new occasion that I have to leave.

Ever Oasis is a combination of several better games

I also came to loathe dungeons because of how many times I had to revisit them, usually for those repetitive fetch quests or some other minor step toward accomplishing the game's overarching plot. Later on, Ever Oasis evolves from a slow-paced, forgettable action game-meets-citybuilding sim to … a generic quest-for-the-crystal adventure, albeit with all of the rest of that stuff still core to the experience. It becomes overwhelming, with so many different components to take care of.

At least Ever Oasis is never punishing, despite its many moving parts. The linear nature of the game meant that I almost always knew where to go, although some puzzles had me throwing my hands up in fury at their inane solutions. The thing I had the most trouble with was the game's camera, which was terribly unfocused and usually accounted for either my death or my inability to find a quest's solution.

Our review of Ever Oasis 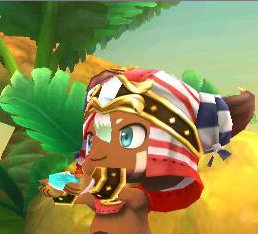 Ever Oasis fails to stand on its own

Yet with little actual challenge to speak of, Ever Oasis doesn't have much going for it. There aren't any tricky enemies to ward off, and the town-building simulation is shallow. It's the combination of several other genres whose best games are far, far, far more worth playing than this one. In its attempt to crib from the best, Ever Oasis never establishes its own identity.

Ever Oasis was reviewed using a retail Nintendo 3DS copy provided by Nintendo. You can find additional information about Polygon’s ethics policy here.