Review and information for Arms

Arms is a rare and welcome thing from Nintendo: a wholly original property starring all-new characters in a new world.

A new property from Nintendo — in other words, a game not set in the world of Mario or The Legend of Zelda — is cause for excitement. Like 2015’s squid ink shooter Splatoon, Arms is something brand new but distinctly Nintendo. It’s charming, stylish and often surprising in its cleverness.

It’s also an example of what the game maker does best. Arms showcases what Nintendo’s unique Switch hardware is capable of, even if it occasionally stumbles in its execution.

Arms is a fighting game with a colorful and chic cast of characters. Much of the roster — fighters like bubbly songstress Ribbon Girl, tiny-girl-in-a-mech-suit Mechanica and the questionably pulsating green blob Helix — were fan favorites as soon as they were introduced, thanks to Nintendo’s incredible character designs.

Strong, memorable leads are at the heart of Arms, and it’s one of the primary reasons it’s so easy to quickly fall in love with the game. But the game also showcases Nintendo’s knack for polishing a simple mechanic — in this case, punching with extendable, springy arms. This is what really sets the Switch game apart from dozens of 3D fighting games that preceded it.

Players have a choice of 10 fighters in Arms, a delightful and diverse mix of men, women and non-human characters. Each fighter comes standard with a choice of three arms, which range from superpowered boxing gloves to giant thwacking hammers, missile launchers and more. Players can mix and match, and which arms you choose will determine how your character fights. Does she punch with slow, heavy hits? Is he a speedy, ranged fighter who can toss curved projectiles? Or would you prefer a bit of both? The game finds a smart balance between simplicity and complexity, and new players should find it easy to jump in a have some fun.

But Arms hides an impressive layer of depth beneath its highly polished exterior. Each of the game’s fighters has his or her own unique skills. For example, Ninjara, whose green hair is tied in a throwing star bun, can teleport dash, while the brutish Master Mummy can regain health while he blocks. Learning how to use each fighter’s skills to complement their pugilistic powers makes experimenting with the roster a lot of fun.

This complexity is made something of a liability due to minimal instruction. Arms doesn’t do a commendable job at teaching the player how its weapons and characters differ. The game has a barebones tutorial that teaches players how to punch, block, jump and dodge, but there’s not much beyond that. Advanced lessons come in the form of a few slideshows tucked away in the “Help” menu. There are a handful practice mode options, but I had to do most of my learning on the job in Arms’ solo portion, the Grand Prix mode.

Grand Prix mode tasks players with battling the rest of the game’s roster in a series of matches. Grand Prix throws more at the player than just standard one-on-one, fight-to-the-death battles though. You also fight the CPU in games of basketball — you need to toss your opponent through the hoop using throws — and in a variation of volleyball where the ball is actually a bomb.

Even at lower difficulty settings, Grand Prix can be surprisingly tough. I often found myself shocked and frustrated at just how relentless my computer controlled foes were. The punishing difficulty sometimes made me wonder if I’d had some fundamental misunderstanding of how to actually play Arms, which wasn’t the best feeling.

Players can also fight others online in ranked one-on-one fights or unranked Party Match brawls. Party Match is excellent: Players are dropped into a lobby and matched up with others in a variety of fights. They may be one-on-one, two against two or three-player free-for-alls. Players may also find themselves fighting cooperatively against a challenging boss character. Party Match’s variety helps keep online multiplayer fresh and engaging — I often found myself thinking “OK, maybe just one more” after every win or loss.

Local multiplayer is also great in Arms. I tested local play using a single Switch and a pair of Joy-Cons at a bar, an impromptu gaming party that was the stuff of Nintendo’s own idealized marketing. People had fun playing split-screen on the Switch small screen. The Joy-Cons, passed around after each battle, sufficed as controllers, and friends and colleagues seemed to quickly grasp Arms’ basic mechanics. I also played wireless one-on-one battles with a pair of Switch consoles. Getting into a lobby and ultimately into a match was quick and simple.

If you don’t have someone to play with, however, or don’t plan on punching out others online, Arms’ appeal may be limited. Outside of Grand Prix and an endurance mode where you battle 100 characters, there’s not much for dedicated solo play. There’s no real story mode or campaign, and don’t expect to find much in the way of Arms’ lore or storytelling.

The omission of a more well-developed story component is confusing, considering how appealing the game’s characters are. It’s not uncommon for fighting games, but on the heels of NetherRealm’s exemplary work with Injustice 2’s campaign only weeks ago, it’s hard not to think of what might have been.

As with other Switch games, players have a variety of control options at their disposal. In addition to supporting standard controls on the Joy-Cons and Switch Pro Controller, Arms offers optional motion control in which players tilt and thrust the Joy-Cons to move, block and attack. Arms’ motion controls are surprisingly precise, though I never felt they were serviceable in actual competition. I had a hard enough time battling CPU-controlled opponents in Grand Prix; blocking and moving by tilting the Joy-Cons only led to further frustration.

Nintendo’s biggest oversight in terms of control is a lack of button layout customization. Arms doesn’t let players remap buttons, which is only made more frustrating by a puzzling control scheme. In order to block on standard controls, players need to push in the left analog stick. It’s an annoying restriction, given that there’s plenty of unused or redundantly mapped buttons on the standard control scheme.

Arms’ other irksome annoyance is the system for unlocking all of the game’s weapons. While each fighter’s weapons are unlocked from the start, if you want every weapon for every character, you’ll need both time and luck. Getting new arms requires playing a mode called, well, Get Arms. The mode tasks players with punching pop-up targets to earn points, which earns them loot boxes filled with random arms. In order to play Get Arms, though, you’ll need to spend an in-game currency. That currency can be earned in any of the game’s modes, from online and local matches to training modes, but you’ll need a lot of it to get access to everything.

Arms exudes a level of creativity and mechanical sophistication that feels uniquely Nintendo. It evokes memories of classic Nintendo games like Punch-Out!!, while also feeling equally fashionable and modern — and set next to Splatoon, suggests the publisher is already charting a path toward the future. With a stylish, memorable cast of characters, inventive gameplay mechanics and smart use of the Switch hardware, Arms already feels like Nintendo's next great new franchise.

Our review of Arms 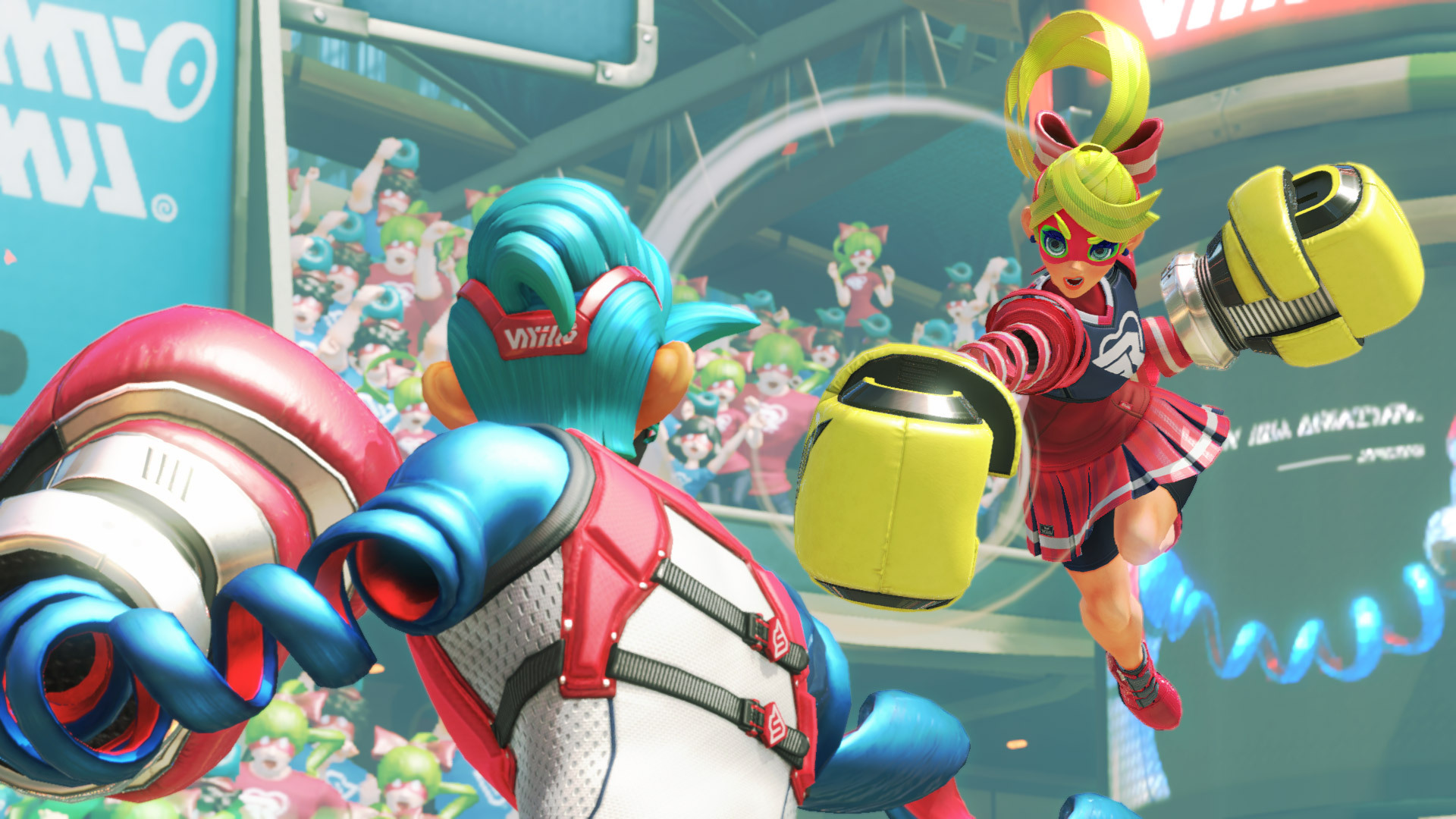