Review and information for Dota 2

For perspective, this is approximately 198 days, which is more than 28 weeks, and more than six months. That's more than I've played any other game, ever. Sometimes I wonder if it's more than every other game combined, though that seems unlikely.

So, closer to 5,000 hours than not in Dota 2, and I still feel some trepidation about writing a review of it. It is without a doubt the most confusing, infuriating, disorienting, unforgiving game I've ever played.

I also think it might be my favorite game. And that just may be because Dota 2 is a game willing to be confusing, infuriating, disorienting, unforgiving and just plain hard.

Based on a mod for Warcraft 3 in the mid 2000s, Dota 2 bears a great deal of the RPG-infused RTS gameplay that defined Blizzard's series — so much, in fact, that some characters in Dota 2 and Blizzard's Heroes of the Storm share identical voicelines.

At its heart, Dota 2's basic gameplay is that of a twitch-based action-RPG game like Diablo. You right click on a point on the ground to move to it, you right click on enemies to attack them, and other buttons are tied to special abilities and items that can be bought at a few shops around the map.

Of course, it doesn't stay simple from there.

Dota 2 is a multiplayer game primarily consisting of five-on-five battles to destroy the other team's "Ancient." Before the game begins, each player must select a hero from a pool of over a hundred different characters, ideally fulfilling roles that might be familiar to MMO players. There are supports, and tanky cores, and DPS-heavy glass cannon damage dealers, and plenty of roles in between, and teams that choose a line-up that synergizes well are more likely to win.

Dota 2 has a single map, more like a playing field, that's split into three lanes — top, mid and bottom — and two sides: radiant and dire. At the beginning of the game, teams generally distribute their players to those lanes.

As this is all happening, AI-controlled minion creatures called creeps spawn from each base from a set of barracks in each lane, with radiant creeps making their way toward the dire base and vice versa. Each lane has three dire towers and three radiant towers, each of which must be destroyed in order to take out the next. Each team's ancient is in their base, behind a final, fourth set of towers. A game is not over until one team's ancient is dead.

From a high enough altitude, Dota 2 isn't unique. The original Defense of the Ancients spawned numerous "proper" repackagings and reimaginings, from League of Legends to, more recently, Heroes of the Storm. In each of these games, as you level up, you can gain new abilities or make existing ones more powerful, and it's these abilities that generally determine what role you should play in your team. But it's in the particulars of its execution that Dota 2 stands out.

Each player over the course of the match will have to buy items in order to sustain them out in the world, and items that augment their hero's basic skills with bonuses, or, as the game progresses, completely new abilities.

As a match of Dota 2 progresses, many of these items can be upgraded or combined to form new, more powerful items — boots, which make your hero move faster, can be turned into arcane boots for example, which restore some mana to any friendly heroes nearby when activated. It also gets a lot more complicated than that.

These items are key to Dota 2's in-game progression, and that's key to Dota 2's wild sense of experimentation (more on that in a minute). Some heroes are far less useful early than they will be later in large part due to the benefits provided by items that are considered key purchases for that hero.

Items are bought with gold, and levels are earned with experience, both of which are gained from the death of enemy units near you. This is common to MOBAs. Dota 2 takes this system and adds to it with the concept of last-hits and denies. Securing the hit on a unit, hero or structure that kills it yields extra gold to the killer, and extra experience. However, when a friendly creep or structure is below a certain threshold, you can force your character to attack it. Securing the last hit on a friendly unit denies part of the resulting experience from your enemies and prevents them from getting gold from it. And in some rare cases, you can even deny friendly heroes, or, god willing, yourself.

Last-hitting and denying is one of many pieces of Dota 2 that reward high-skill play, and the game is full of bits like this that are only really learned over time. The reason? Dota 2 is an exercise in dynamic problem solving.

The greatest strength of Dota 2 is the sheer flexibility available to every player. A common refrain among Dota 2 players is "everything is situational," and this is true. Nothing is the right choice all of the time, and the game's collection of items are there in large part to respond to the decisions and strategies made by other players. Is the other team a magic-heavy lineup? Then someone should build a Pipe of Insight, and heroes with magic resistance skills might want to take those sooner rather than later. If the enemy team has a surplus of "catch" — meaning they can grab and hold you or your teammates in place, dealing damage or even killing you — then force staffs can change the course of a fight, and the trajectory to a game.

It's not uncommon for someone to come up with a completely new solution to one of Dota 2's problems, and crack its meta-game wide open. This variability is an element of the game that really only opens up as you play more and more, because there are so many items and interactions that it takes a lot of time and experience to begin to understand them.

Even long-term players can't claim mastery, because Valve routinely patches Dota 2 in various ways. Some changes are minor balance updates. Others add new heroes. Sometimes, new items are added, and, in the most dramatic changes the game sees, the very map itself shifts and evolves. The game is always changing, requiring an active level of engagement to keep up.

Combined with the level of mastery and intricacy possible throughout Dota 2's systems, this makes for the most consistently and deeply rewarding game I've ever played.

There are so many solutions to every problem, many of which aren't obvious, that success at a moment-to-moment level can often feel like a diabolical Rube Goldberg machine. And to win, sometimes after an almost certain defeat, feels like legitimate triumph. Dota 2 matches are comparatively long, by multiplayer game standards — the average match length fluctuates from patch to patch; it currently hovers between 25 to 35 minutes. This provides enough time for a series of phases, an early, mid and late game, and provides a narrative to each and every match. Dota 2 is a collection of parts around which to build and test strategies, and when those strategies work, it can feel like no other game exists.

Put more simply: The more you give to Dota 2, the more you put into it, the more it reveals, and the more depth becomes apparent.

Unlike its MOBA contemporaries, Dota 2 is completely free to play. All heroes are available to everyone at all times, and the experience you gain at an account level only serves to unlock ranked play. Skills vary wildly from player to player, but the playing field they meet on is largely level, regardless of how many hours or how much money they've put into the game.

That money is entirely driven by cosmetic items available within Dota 2. The most common are hero items or sets that change that character's appearance, though there are also complete visual overhauls of the game's playing field. Valve has been remarkably mercenary in finding new ways to monetize the game — my favorite examples include replacing the in-game announcer with Rick and Morty, or Deus Ex's Adam Jensen. I personally have spent more than $700 on Dota 2, none of which I felt was required of me.

On the flip side, when Dota 2 is bad, it can be soul crushing. I've never played a game so capable of making me feel like shit, like so much of a failure, or that every decision I made was, ultimately, futile. I've made dozens of friendships through Dota 2 — I also wonder how many it's ended. I've been stuck in matches I knew I couldn't win for more than an hour. My longest match was two hours and six minutes (at least I won that one, and in an exhilarating and improbable comeback).

But this is part of Dota 2's biggest and most consistent problem, a problem that's arguably only gotten worse over time. Dota 2 is an intimidating, complicated game to new players and even existing players, and the manner in which Valve onboards new players is, frankly, inadequate (though Valve has acknowledged this before, and fairly recently even). Dota 2's biggest obstacle is the at times overwhelming amount of bullshit and opacity that stands between less experienced players and understanding the game.

In turn, it's fallen to the community to create an ecosystem of support for other players through a network of fan sites, and, perhaps most helpfully, an in-game build guide. Essentially, players can make "builds" for other players to select for their hero in-game, which will populate a panel in the shop menu with suggested items, and highlight what skills and talents are suggested at each level.

It makes some sense that Valve allows users to help one another. Dota 2's roots are in an entirely self-regulated community, and it will always live or die by that community. This is likely why Dota 2 is a game built to be watched almost as much as it is played, with easy watch tabs and painless in-game spectating of friends' games — of anyone’s game, actually. I've learned almost as much watching friends who are better play Dota 2 from their perspective as I have from any external guide.

Dota 2's community also has some rather challenging elements. It can often be as toxic as anything you'll find in multiplayer gaming, and some memes relating to common player misbehavior have become legendary within the scene. That community has also become one of the most active, deliberative, productive fanbases any game has ever seen. It has spawned libraries worth of analyses and content, almost all of which has received Valve's tacit, hands-off blessing. It can be the worst thing about Dota 2, and it can be the best thing about Dota 2.

Dota 2 is the best game, and the worst game.

And this dichotomy is perhaps the best descriptor I can attach to Dota 2. It is frequently a game which occupies two opposite spaces simultaneously. It is the best game. It is also the worst game. No game has ever made me as miserable as Dota 2 has. But no game has made me feel so consistently rewarded for my time, and as consistently, wonderfully connected to the friends I play it with.

Dota 2 was reviewed over the course of three years and nine months primarily on PC. You can find more information about Polygon’s ethics policy here.

Our review of Dota 2 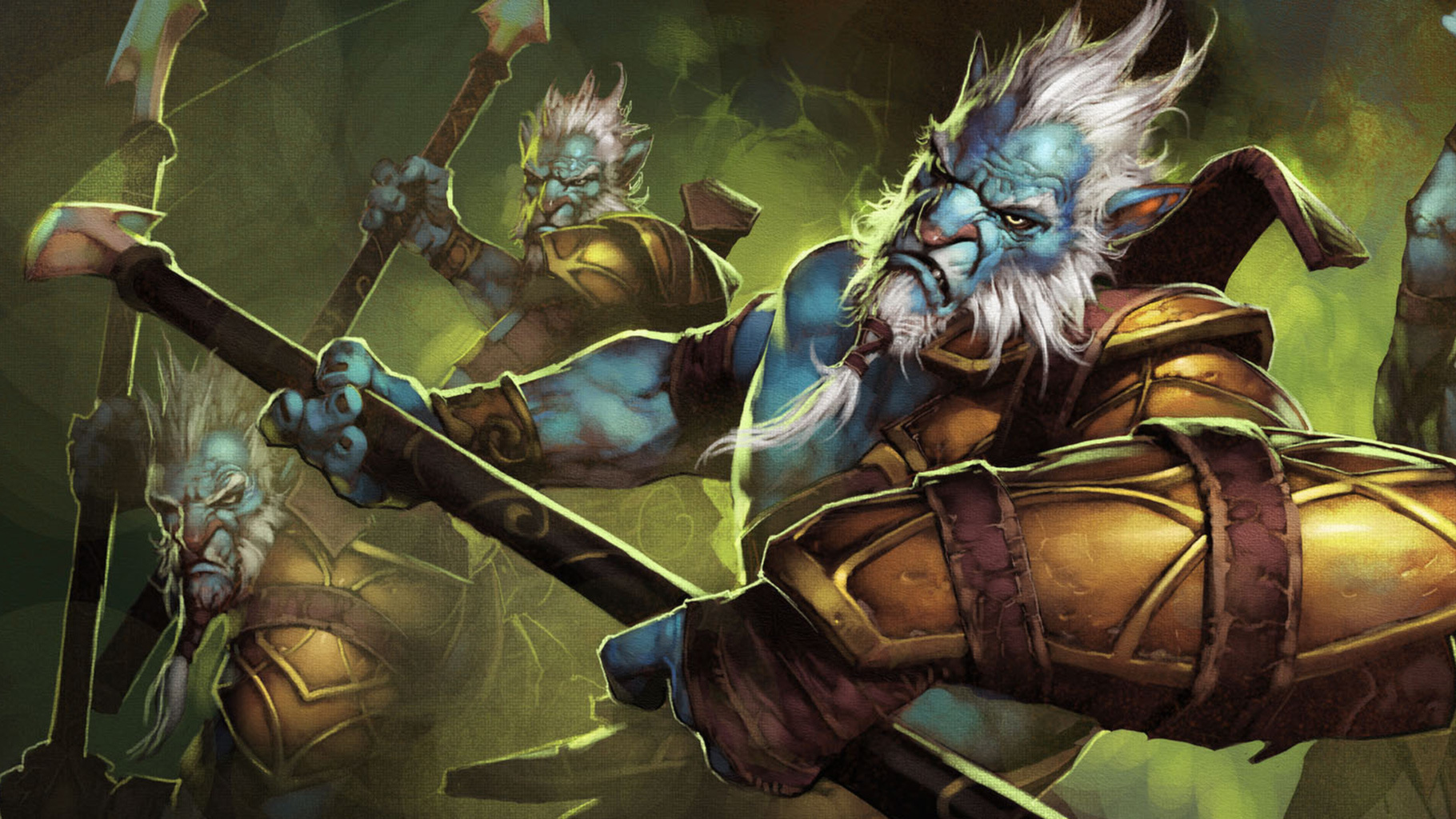