Share All sharing options for: Star Wars: Legion stole the show at this year’s Gen Con

Star Wars: Legion is a brand new hobby miniatures game from Fantasy Flight Games that was unveiled for the first time at this year’s Gen Con in Indianapolis. Two-player demos took place on stunning, hand-made dioramas that were the talk of the show.

Legion is a points-based wargame. The boxed starter set will come with 33 unpainted miniatures, about enough for two 500-point teams of Rebels and Imperials, as well as a collection of eight barricades for cover. Tournament play will feature 1000-point teams, and Fantasy Flight has plans for more factions down the line.

Even more exciting than the stunning dioramas was the level of refinement on display from Alex Davy, a designer with experience on the hugely popular Star Wars: X-Wing Miniatures Game and Star Wars: Armada. 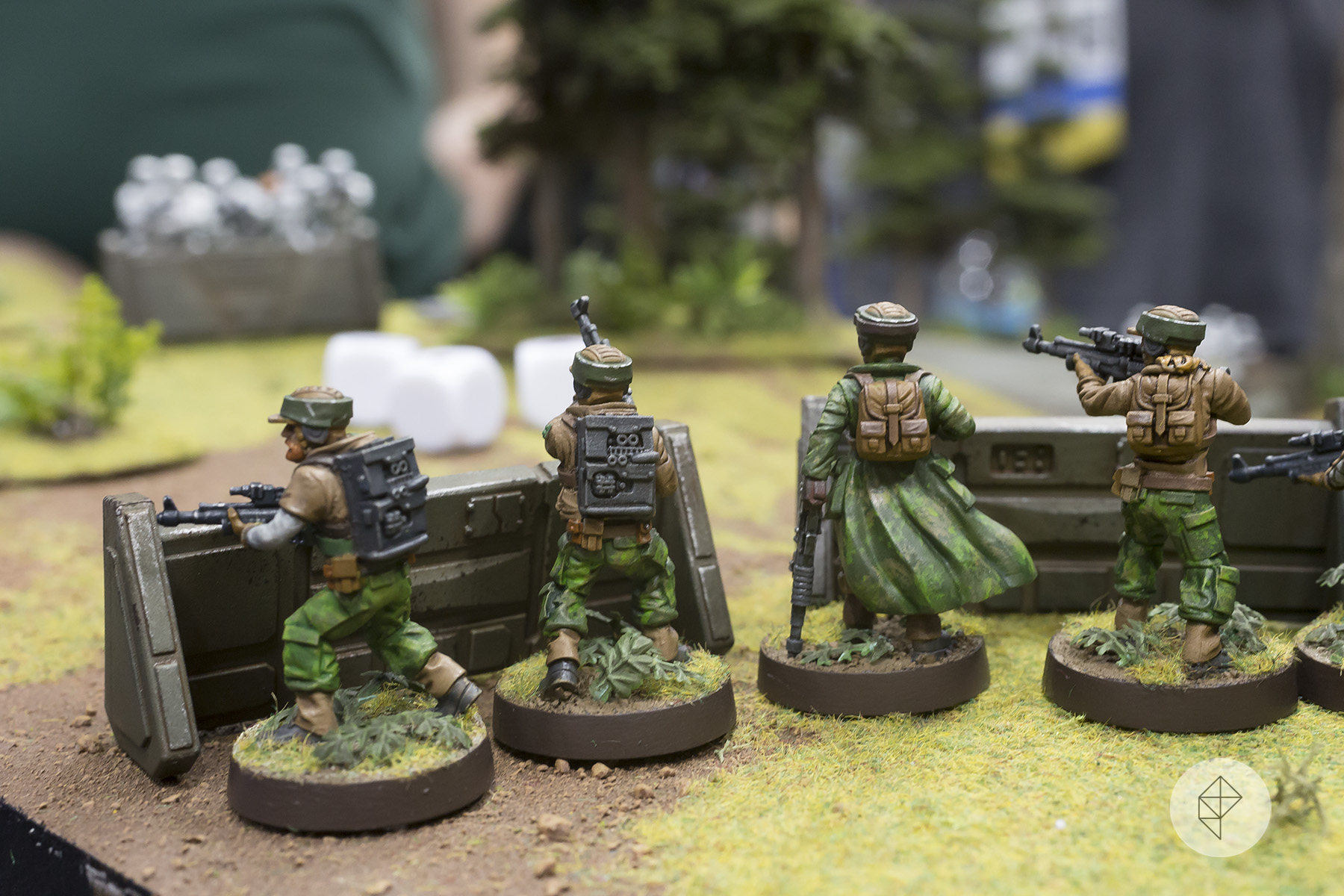 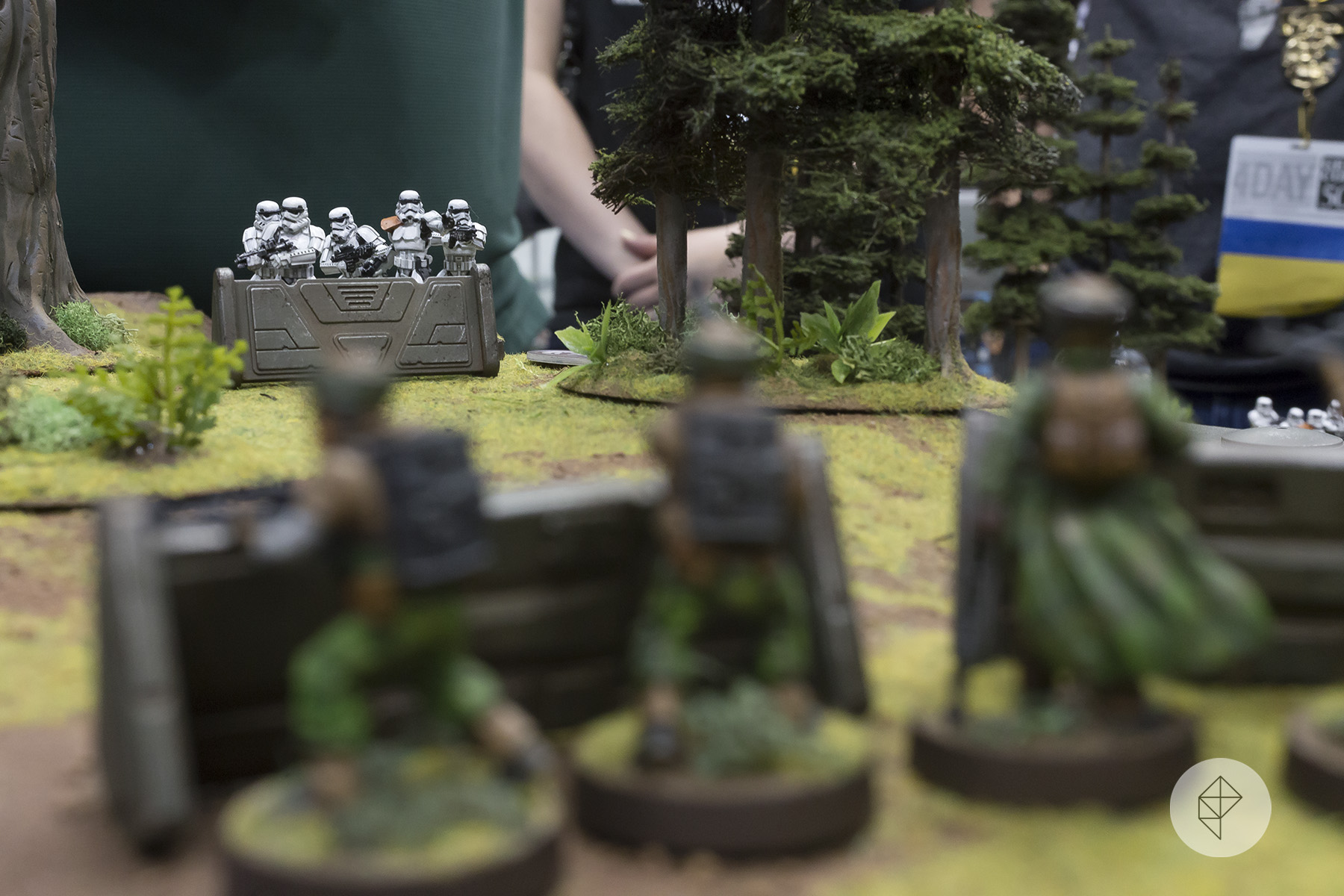 “You can see a lot of Fantasy Flight’s core DNA in this game,” Davy said. “It’s not a house style, but because we have the same design team and we all work together on a lot of different projects, we pull elements that we like from those designs when we’re making a new thing.”

One of the highlights of the game is how quickly it moves. Take the infantry teams, for example. Each is divided into units of five. Measurements are only needed to move the leader, and subsequent units can be placed nearby at will so long as they’re within a minimum range. No rulers are required, and all measurements are taken with out-of-the-box components.

“Something that I really like from X-Wing and Armada is the sense of momentum those games both share,” Davy said. “The fact that units are constantly in motion in Legion means you avoid the sort of frustrating stalemates that can often arise in wargames where two sides are just blasting at each other from cover for the whole game and rolling dice and not doing a lot of tactical repositioning.”

The game’s systems also pull from Star Wars lore as much as possible. Speeder Bikes are high-speed units and great for flaking, but when activated they must take a movement action. If they cannot complete their move and hit a piece of terrain, they have a good chance of blowing up on the spot.

Facing and turning is handled with Armada-style hinged rulers. Three different sizes come in the box. Notches are included in the front of larger units, and their bases feature markings for each quadrant. Some attacks, like the Scout Trooper’s blaster pistol, can be made from the side or the rear of the unit. Range is managed with a segmented ruler, which is also included in the base set.

Each team must field a commander, and two units come in the base set: Luke Skywalker and Darth Vader. Both have unique command cards which are shuffled into the deck before each battle. These allow for special abilities to come into play.

“If you bring Vader, that’s the only way you can play ‘Master of Evil,’” Davy said. “It’s one of those cards that can totally change a game. It involves a mechanic that we haven’t been displaying here for simplicity’s sake, but he puts out Suppression Tokens — three Suppression Tokens on every enemy unit within range one to two.

“If you get too much suppression, you run away. So it’s as if Vader’s presence is so terrifying that him even being nearby is enough to completely panic units. And so it’s a once-per-game effect, but at a pivotal moment it can totally turn the tide of battle.”

Star Wars: Legion will cost $89.95 and be available in early 2018. Expect tournaments to spring up at your friendly local game store soon after.

Polygon was on the floor at the 50th annual Gen Con tabletop gaming convention in Indianapolis, Indiana. You can find all our stories here as they go live throughout this week.

The most chaotic board games from Gen Con 2022