Review and information for F1 2017

At first, I approached F1 2017 with a blunt instrument, a crowbar of a driver. Win on speed, course knowledge, and slamming the brakes. By the time I had finished, I left it working the game on a jeweler’s anvil, making precise and articulable choices with the treasures of motorsport.

Thanks to an even deeper career suite, F1 2017 more resembles the appeal and intrigue of its sport than in any past edition. An expanded research and development tree gives drivers more incentive than ever to do full practices, which in turn refines their vehicle for the race, all of which teaches the driver, in a very natural way, more about how to race their career.

Those who don’t care for career racing are still served a tray piled high with four big modes plus the usual multiplayer. Longtime drivers or those who have already already learned the lessons of Career in past editions may not find this one so profound, though Classic cars return to Championships and Grand Prix.

F1 2017 is a big tent that mingles accessibility and technical rigor without alienating either constituency. Those who still want a demanding racer may still find it. As a lapsed F1 driver (last playing F1 2013) I found the practice programs, some of which were introduced last year, a bit dense at first. F1 2017 goes for patches of time where it doesn’t do a good job of communicating what’s expected, even with a tutorial video supplied.

But the initial learning curve was mercifully short, and after a few a-ha moments, plus a lot of lap time, I was ticking off my assists about one grade per event, becoming a more respectable driver. One unfortunate drawback, however, is how the game locks you to one opposing AI driver difficulty level for the entirety of the career. I chose easy.

It makes sense that I would be encouraged to improve my driving and accept greater challenges in Career, with the final hurdle going at tougher AIs. But I am never going to drive a manual transmission (sorry, just can’t) and I fear I will soon top out against my competition or be forced to start over against a tougher field, forsaking all of my R&D.

Correction: Opposing driver AI not only can be changed race-to-race, it can be changed mid-event (between practices, qualifying and the race) if necessary. The feature can be overlooked — it’s in a tab in pre-race options available in a loading screen — but it is there, so the above concern is not founded.

The R&D component that I found so fulfilling is tied mainly to the ongoing worry of an F1 team: the car’s condition, both in-race and race-to-race. Other racing games have upgrade trees that confer an immediate benefit the team never loses. In F1 2017, I felt like I was constantly fighting to keep the car in shape. Parts will wear down over the course of a season and, per F1 rules, only a set of four for each part are granted; getting more incurs a steep penalty in starting position. This found me swapping between worn parts during practices and saving less worn ones for the race. My most valuable upgrades were the ones that make parts wear down less, given my driving style (and the fact it was my rookie season).

This means even the most experienced drivers can’t just tick off buffs and construct a supercar. I felt invested in my choices. Of course, F1 2017 was still there to compare me to my competitors (with good old Scuderia Ferrari and Petronas Motorsport’s progress bars way ahead of my choice, Haas). This, plus the mode’s rivalry scorecard, pairing the career driver against another, gave me a more complete picture of how I was doing, what result should be reasonable and when I should take another assist off my driving.

Practices encouraged me to run every minute of time out on the track thanks to the research point dividend they paid. They also gave my crew, in the background, a picture of my driving style that fed into a performance plan going into the event. On the track, I quickly realized how hard I had been on the car in qualifying, and that the pole position I’d been so proud of would now be unsustainable as I lost horsepower and gears and tore up the engine even more.

One reason I was unaware of how I was damaging the vehicle is because I was racing on a PlayStation 4 with a DualShock 4. Though many players prefer racing wheels, F1 2017 is perfectly good with a gamepad. However, the pit audio comes out over the tiny speaker on the controller by default. When I changed this to the TV speakers, I heard a wealth of information about the wear I was putting on my car, not just bland remarks about my fuel or lap times.

commentary from David Croft and Anthony Davidson is enthusiastic but generic

The crew chief’s remarks aren’t some aesthetic detail calling out what I knew already; it’s vital to the point of F1 2017, which is to make smart decisions and hard choices. With a 10-second gap between myself and the fifth-place driver at Bahrain, I switched to lean fuel mixture, settling for the points of a good finish while giving myself a little extra assurance my tank wouldn’t run out.

This and a slew of other commands and communication requests back to the pit are available on the D-pad, and it is a terrifyingly deep menu to navigate at 130 mph. Fortunately, the fuel command has an easy muscle memory to it (circle and right for rich, circle and left to move it to lean) but even visually confirming that in a straightaway I lost my position to Carlos Sainz, like I was texting while driving.

Where the audio is superfluous to F1 2017, however, is in its broadcast presentation. The pre-and post-race commentary from David Croft and Anthony Davidson is enthusiastic but generic, and it rarely sounds like they have followed the action. I don't expect an in-race call, but the commentary usually stops at one detail: who qualified first, who won and that's about it. I find it hard to believe that an event couldn't throw out at least one more scrap of information for the game to call out.

The commentary is paired with cutscenes that are a nice bumper between the action but little more. I saw the same sequences in the garages leading into the practices, leading into the race, and following the race. It’s the same animation, simply shown from a different angle. These scenes are particularly meaningless with classic cars in the Grand Prix or Championships modes, as classic drivers have not returned with their old rides, so every driver other than a created one will be a generic bald man.

None of this is Codemasters’ forté, and perhaps many video game drivers simply don't care. But Codemasters chose to make this effort, even threading more dialogue and interactive scenes into the Career mode to give the player a sense of a story beyond the track. The interactions there are nothing profound, but they do at least support that goal. In the races, though, every broadcast piece becomes easily skippable.

The blandness of the animated scenes is no reflection on the racing visuals, which remain as strong and painstakingly detailed as ever — forgetting a few pixelated textures, mainly in the form of sponsor logos. Just as essential to any racing game is the sound, and it is top flight in F1 2017 as well. Racing the classic vehicles is worth it just to hear the old engine notes of the 1990s after buzzing around in present day.

F1 2017 captures the thrill of racing, both on and off the track

F1 2017 is a game that's as much fun to think about as it is to play, and as intriguing to plan out and strategize as it is to race. And it is a lot of fun to race, because so much of F1 2017’s enjoyment comes from things built up over time, not the year-to-year bullet-point features of video gaming.

It’s in the sparks coming off the skid blocks in the uneven pavement of Shanghai’s backstretch; the drumroll of the kerb as I hit my racing line just right, the lens flare of a midsummer sunset making an easy bank at Silverstone into a perilous wide turn and a sudden fight with Daniel Ricciardo. It’s in the feeling that, after Codemasters has gotten so many things right about the thrill of racing, I can too. 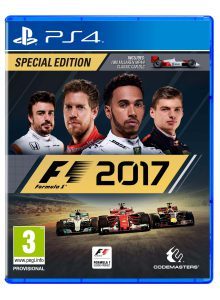