Capcom has crafted another great, intense fighting game; shame about how it looks

Share All sharing options for: Marvel vs. Capcom: Infinite review

Review and information for Marvel vs. Capcom: Infinite

Marvel vs. Capcom: Infinite is the franchise’s ugly duckling.

The crossover fighting game series has made a name for itself by mashing up characters from Marvel’s vast stable with stars from Capcom games from the last few decades. The tag team fighting system — a series staple — means Street Fighter stars can team up with the Guardians of the Galaxy, and nobody bats an eye.

But Marvel vs. Capcom: Infinite eschews the previous title’s comic book aesthetic to craft one that feels more akin to Marvel’s Cinematic Universe. This break from the franchise’s norm has created some inescapably questionable design choices that mar an otherwise stellar addition to the series.

Like its forebears, Marvel vs. Capcom: Infinite is a frantic, team-based fighting game. It trades in the three-on-three battles of more recent entries for two-versus-two matchups, where players pick from 30 characters from the two respective universes. The roster is a mix of iconic — Mega Man X, Ryu and most of the Avengers — and more niche, like Darkstalkers villain Jedah and Dr. Strange foe Dormammu.

Unlike past games in the crossover series, Infinite ditches the use of support attacks from other characters and instead lets you freely tag in your partner character. This is one of its most clever innovations. Instead of relying on a support character to pull off a single attack that would let your current character extend their combo, the fast tagging system allows you to keep a single combo rolling across multiple character swaps. This small functional change busts the door open to allow for some of the franchise’s most expressive gameplay yet.

For instance, a character like Ryu can perform a multi-hit attack like his Hurricane Kick and, mid-animation, we can tag out to Captain America. While Ryu is still completing his attack, Cap is in our control. From there, he can continue the combo and, moments later, we could tag Ryu back in to finish the combo. This new system is a subtle change that deepens Marvel vs. Capcom: Infinite’s mechanics, and it dovetails nicely with the game’s new Infinity Stone system.

Ripped from the pages of Marvel comics, players select from one of six Infinity Stones at the start of a match. Each stone grants your team two levels of new power. First, there’s the Infinity Surge, a special move that can be activated at any time. If you activate an Infinity Surge with the blue Space Stone, for example, you can pull your opponent closer, ending a game of keep away and opening up new attacks.

Each use of your Infinity Stone will deplete your infinity gauge, but if you can fill it up enough — by dealing and receiving damage — you’ll have access to an Infinity Storm, an ability which dramatically changes play for about 10 seconds. The yellow Mind Stone, for example, rapidly fills your hyper combo meter — the game’s super move — while the orange Soul Stone sends both your fighters on the attack at once. (This one seems particularly powerful, because it can also resurrect a dead character.)

These stones don’t feel overpowered, despite their strong abilities. Almost every trick can be blocked, avoided or countered. Locking your opponent in a blue, glowing box with the Space Stone doesn’t stop them from shooting projectiles across the screen at you. Infinity Stones aren’t game-enders, but they give you strategic options that feel great.

Marvel vs. Capcom: Infinite’s revised core mechanics make it arguably the most complex entry in the crossover series. The roster may be smaller than usual, but the fast tagging system really opens up options for clever combo creation. The Infinity Stones are an even deeper level of complexity that might scare off casual players. But Infinite also employs two systems to invite new players in.

The roster may be smaller than usual, but the fast tagging system opens the door for creative combos

Infinite’s auto combo and easy hyper combo systems allow players to pull off a small set of powerful moves, no matter your skill level. The auto combo system lets less skilled players link together a simple, fairly high-damage combo by repeatedly pressing the light punch button. It isn’t the flashiest or most devastating combo, but it’s adequate enough to give even the most amateur players some tools to put up a fight. To further assist new players, easy hyper combos allow them to use one of the game’s stronger attacks with the press of two buttons. As with auto combos, easy hyper combos won’t completely flesh out a player’s ability to compete at a high level — hyper combos are blockable, after all — but it will at least give them a shortcut as they become more comfortable with the game. It’s also easy to turn off in menus if you aren’t a fan.

For players eager to learn the ropes of each character, Infinite’s mission mode offers up 10 challenges per character. The small missions briskly show off each character’s most important special moves and simple combos, helping to illustrate key aspects of their design. The challenges start off simply enough, introducing core functions of the game in the process, but average players will likely hit a wall very abruptly. Later missions will expect players to know certain aspects of high level play, without explicitly explaining them anywhere. If you don’t understand concepts like mid-combo double jumping or how to buffer special moves into one another, you might finding yourself frustrated at the harder missions.

However, players at all skill levels can enjoy Marvel vs. Capcom: Infinite’s breezy story mode. Though it only lasts about two-and-a-half hours, it does a decent job imagining a scenario where two pop culture universes collided.

The story mode’s conflict picks up several weeks after the Marvel universe has been forcefully merged with Capcom’s (hilariously implying that Ghosts ‘n Goblins exists on the same plane as Resident Evil and Street Fighter). At the center of the chaos are two major villains — Marvel’s Ultron and Mega Man X’s Sigma — fused together to create one uber villain.

The story mode’s biggest struggle is keeping things interesting when you have squads full of A-list superheroes punching through waves of nameless robot foes. Iron Man, Thor, Chris Redfield and Ghosts ‘n Goblins protagonist Arthur remain one-dimensional heroes throughout the affair, and they are completely upstaged by comic-relief pairings like Hulk and Ryu, or Spider-Man and Mike Haggar, or Ghost Rider and Morrigan from Darkstalkers. The story mode’s best moments are when it doesn’t take itself too seriously, and those laughs are woefully absent from its opening and climax.

While the story mode does a suitable job trotting out characters from both companies to create a spectacle, seeing all these characters together illuminates the Marvel vs. Capcom: Infinite’s biggest fault: its terrible visual design.

Infinite’s aesthetics are the stalest the franchise has ever seen. It’s not only incredibly bland for a Marvel vs. Capcom game, but remarkably boring compared to any AAA title in 2017. Past entries in the series look like they were ripped from the pages of a comic book in a way that was gorgeous and memorable, but this semi-realistic style has created instances where visuals are either merely serviceable or downright rough to look at.

These visual problems are especially obvious in the character models’ faces. Characters with creature features like Nemesis, Dormammu and Firebrand look fantastic and well-crafted. But characters with human faces, like Spencer, Morrigan and Frank West, look hellish. They feel like low-rent knockoffs, mouths and eyes permanently stuck portraying some awkward mixture of pain, sadness and morose horror.

The bad visual design carries over to Marvel vs. Capcom: Infinite’s user interface and menus. Other entries in the Marvel vs. Capcom series featured a UI that felt like you were playing a comic book — character select screens like comic book panels, screen transitions like flipping a page and on-screen notifications hand-drawn right into the world.

Infinite’s UI, by contrast, feels like placeholder graphics that were never changed for the final product. There is nothing that makes it feel unique; you could cut and paste these menus into any other fighting game, forgetting that the Marvel vs. Capcom franchise has been celebrated for it’s unique visuals and respect for the source material.

Marvel vs. Capcom: Infinite is an eyesore, but an exciting and expressive one

It’s hard to deny how much of a blemish Marvel vs. Capcom: Infinite’s visuals are, but it would still be a mistake to skip this entry for that reason alone. The fast tagging system and the Infinity Stones change up the series’ standard mechanics and open up so many options for creative play, no matter your skill level. Infinite is expressive, exciting and fun to play, but the visuals inspire more eyerolls than the hype this series deserves.

Our review of Marvel vs. Capcom: Infinite 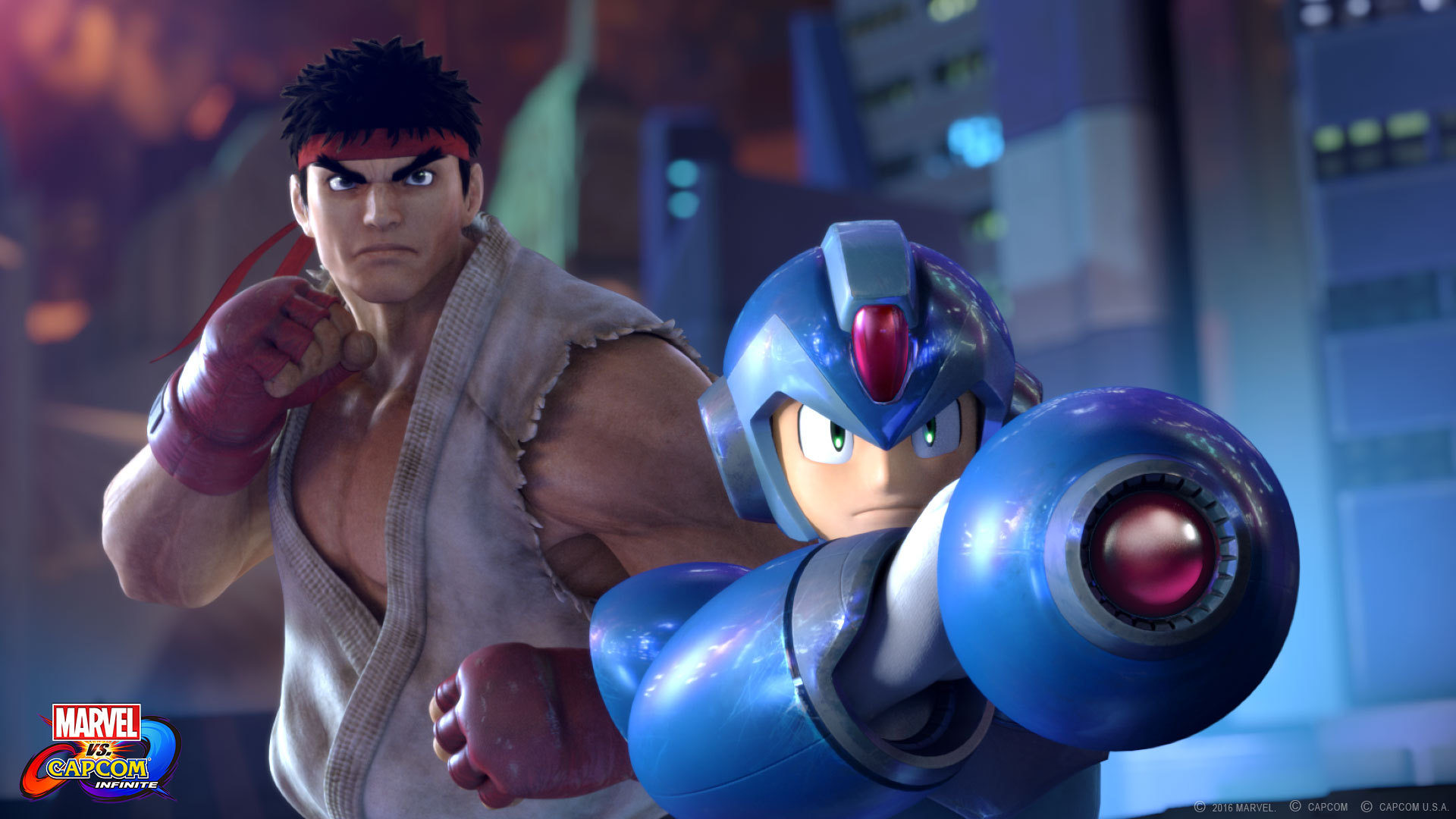