A spicy take on the mystery thriller genre

If you’ve never been forced to kill people by an evil monochromatic bear, and you’re dying to know what it’s like, Danganronpa V3: Killing Harmony might be the game for you.

Beginning with the first game’s release in Japan in 2010, Dangranronpa is a series about high school students being plunged into despair and forced to kill each other. It may sound bizarre, but it’s grown incredibly popular, spawning several games, anime and manga adaptations, light novels and even mobile games.

Danganronpa V3 follows that same formula — a new set of students placed into the same horrifying situation. It’s similar to the older games in that its best part is a diverse and fun cast. Between its funky aesthetic, its absurd plot and its lovable characters, this game carries on the tradition of the Danganronpa series — which is to say it’s unlike pretty much anything I’ve played.

Danganronpa V3 places players into the shoes of Kaede Akamatsu, the “Ultimate Pianist,” a young woman who’s stuck in a prison-like school campus with 15 other students. Each of these students is also an Ultimate — a teenager who is exceptional at a given task. From Ultimate Cosplayer to Ultimate Anthropologist, the game builds up a rowdy cast of characters with quirky personalities.

Those personalities (along with some bomb-ass designs) are what make the characters so lovable. Among the 16 students at the heart of Danganronpa V3, there is bound to be one you connect with. Whether it’s the vulgar Ultimate Inventor, Miu Iruma, or the airheaded Ultimate Artist, Angie Yonaga, you will love somebody. And while that’s a strength, it’s also the danger with Danganronpa V3. You can’t get attached to anyone, because you don’t know when they’ll die.

Among the 16 students, there is bound to be one you connect with

As in previous games in the series, Danganronpa V3’s setting is not a traditional school. Rather, it’s a horrific academy where something called the killing game takes place. Led by Monokuma, an adorable but deadly teddy bear mascot, and his Monokubs, robotic bears with sadistic and insane personalities, the killing game forces the students to kill one another and then attempt to trick the others in a trial. If the killer tricks the other students, they get to go free while everyone else is massacred.

While this setup is killer, so to speak, the dialogue is awkward at times. If the bloody murders weren’t enough reason to not play this game around kids or stuffy adults, then the dialogue will be. Many of Danganronpa V3’s’s jokes are just silly pop culture references. For example, at one point, Monokuma cosplays Jibanyan of Yokai Watch, and in another the Monokubs talk about how their dad only listens to “alternative facts” and not “fake news.”

However, there are times when the game gets more ... inappropriate. Every sentence that comes from Miu’s mouth has some vulgarity in it, and usually in the form of sexual harassment. Jokes about boobs and boners felt forced, even if they weren’t enough to ruin the game for me. If nothing else, the goofiness provides some much-needed comedic relief to balance out the dark and depressing realities of the main plot.

If the dialogue was sometimes off putting, Danganronpa V3’s art style was much more of a hit for me. All the characters and objects in the game are rendered flat, like a pop-up book, as you walk around the 3D campus. That normal visual style is broken up by beautiful, stylistic fully-painted scenes. The end of each trial rewards you for pointing out the right killer with an amazingly gory cutscene showing how the murderer dies -- and these are not your average executions. I’ll refrain from spoilers, but each Ultimate is given an execution appropriate for their area of expertise, and all of these have haunted me since I saw them. I’ll never unsee them.

To accomplish its strange split between drama and horror, Danganronpa V3 is broken up into several parts: living and interacting with the other students in a visual novel style, investigating the murder when it occurs and then completing the trial. This creates a unique game that acts like a crossover between Battle Royale and Phoenix Wright.

Even if you don’t normally enjoy the endless text boxes of visual novels, Danganronpa V3 may still have something for you. The trials kept my attention, though they’re not too hard. They break up the narrative-heavy core of the game by forcing you to compete in minigames. In one, I had to shoot evidence bullets through floating text; in another I had to solve block puzzles. At one point, the game even had me driving a taxi as part of a trial. There’s never a dull moment and rarely an opportunity to shake things up that Danganronpa V3 doesn’t take.

And even through all the absurdity, the plot still managed to pull at my heartstrings. The more information I uncovered about each student, the worse I felt; everyone seems like they have a justified reason to kill somebody. Danganronpa V3 isn’t a straightforward, obvious mystery. It releases red herrings everywhere, so going into trials, I had no idea who did the deed. I didn’t even have one character in mind. It truly felt rewarding to work through the case with other characters and expose the killer.

Danganronpa V3: Killing Harmony is an emotional, but amazing experience

Danganronpa V3 is one-of-a-kind. It got me attached to characters within minutes before ripping out my heart. It twisted and turned in every direction, and there was always something new and even more terrifying on the way, leaving me little time to mourn my fallen friends. This may be a game that’s mostly about reading text, but it still managed to make my heart race. 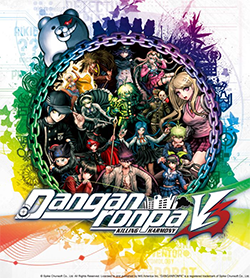