Don’t let the name fool you; this is one of the best action-RPGs of this generation

Share All sharing options for: Ys 8: Lacrimosa of Dana review

Review and information for Ys 8: Lacrimosa of Dana

The first step to loving Ys 8: Lacrimosa of Dana is to completely ignore everything about its title.

Ys is a long-running action-RPG series from Japan, but chances are, if you’ve ever played one, you don’t need this review telling you all about it. And “Lacrimosa of Dana”? What are these nonsense words? Trust me: It doesn’t matter. The baffling name doesn’t mean anything until deep into the game, and it shouldn’t scare you off.

Everything about the Ys 8 package screams that it’s an incredibly niche game, something only the most hardcore fans of Japanese role-playing games can enjoy. But the reality couldn’t be further from that. Though full of anime-tinted high drama that may put off some players, Lacrimosa of Dana is one of the tightest-designed action-RPGs I’ve ever played, a game that elevates the series to a stellar new level in everything but name.

Ys 8’s opening sees series protagonist Adol Christin and his best buddy Dogi on a ship sailing to their next adventure. The ship is attacked by a massive sea creature, and Adol finds himself washed ashore on a mysterious island. Although Lacrimosa of Dana is situated at a specific place in the series’ timeline, with occasional references to past and future games, it requires no real knowledge of the plot so far. Like most games in the series, it’s a stand-alone adventure.

However, Ys 8 sets itself apart from previous Ys games — and indeed, from the Japanese RPG genre as a whole — with a unique setup. Getting stranded on an island isn’t necessarily a new idea in RPGs, but at most it usually serves as a brief setpiece in a lengthy journey. In Lacrimosa of Dana, the island is the full game, and every inch of Adol’s quest is about struggling for survival and searching for a way to escape.

Adol isn’t on the island long before he starts running into other survivors from the large cruise ship he was on. These ragtag travelers form a community known as Castaway Village, and it’s up to Adol and a handful of other combat-ready allies to make sure it thrives by gathering materials, finding more shipwrecked pals and slowly mapping out the massive, mysterious island.

Survival isn’t as easy a proposition as it seems at first. Adol and his friends quickly discover that the island of Seiren holds many secrets — most pressingly, it’s home to a huge number of dinosaurs (or “ancient species,” as the game refers to them) that should be extinct and that don’t appear pleased to have had their quiet home disturbed. As Adol and crew explore, they collect materials such as wood, ore and meat that are fed back into Castaway Village, and used to resolve villagers’ requests and strengthen defenses for the inevitable dino attacks. The more you put into taking care of Castaway Village, the happier the residents will be, and the more you’ll get back from them in return.

The push-pull of exploring deeper into the island, then returning to Castaway Village to defend it from attacks or move the story forward, creates an appealing gameplay loop that’s stronger than anything Ys has had before. Previous games have focused solely on the fast-paced combat, and that’s still great. Ys 8 employs a combat system similar to the one in 2014’s Ys: Memories of Celceta; it’s a fairly standard hack-and-slash setup, but you’re rewarded for perfectly timed blocks, dodges and skill attacks. It’s speedy, fun, just challenging enough and very rewarding to master.

The combat isn’t what makes Ys 8 special, though. Rather, it’s the added lightly strategic layer of having to always worry about defending your village, about finding gifts to increase the happiness of your fellow castaways, about finding more castaways so you can clear out a boulder blocking progress on one side of the island and so on. Virtually every moment in the game presents a half dozen different directions Adol could go in, a smattering of goals to choose from — each of which either open up other goals or offer rewards that can immediately make his party more powerful.

Ys 8 doesn’t just work on this structural level, but also in the moment to moment. Adol and the five other playable characters in the game just feel good to move. You can swap between all six playable characters on the fly, and between three of them at the press of a single button. That allows for simple, quick battle tactics, like switching to a ranged character to take down flying enemies. Even the slowest party member — a chunky lush of a fisherman named Sahad — can roll around nimbly in combat, and the party as a whole gains further exploration abilities by way of “adventure gear.”

The adventure gear ends up being another incredibly smart and compelling chain in Ys 8’s game design. Each piece of gear provides a different benefit, such as lighting up dark areas, allowing you to climb vines, letting you breathe underwater or (my personal favorite) letting you double-jump. Every time you discover a new piece of adventure gear, new portions of the map open up for exploration, allowing you to fill in more of the island and find fresh treasures or survivors. This element isn’t new to the Ys series, but more so than in any previous title it makes Lacrimosa of Dana feel like an action-RPG spin on Metroid. It’s brilliant.

The only thing about Ys 8 that isn’t brilliant is its story, and even that is a bland but forgivable distraction at worst and a genuinely entertaining adventure in its best moments. As is the way with Japanese RPGs, Lacrimosa of Dana’s sparse narrative eventually expands to include an ancient civilization, a character with a bad case of amnesia and a surprise threat to the world that Adol and his friends must contend with in addition to finding a way off of Seiren.

Ys 8 mostly handles this plot fine — there aren’t too many overlong cutscenes until the very end — but there were definitely moments when I wanted to get back to the action rather than listen to the main characters fret over what to do next. The best moments of the game focus on the mismatched townspeople of Castaway Village itself. They’re mostly a collection of anime tropes, but they’re cliches that feel well-executed. Each member of the community has a largely self-contained, satisfying character arc, and if you work with them and follow each plot thread to completion, the game provides a real sense of how the experience of being stranded on the island has changed them.

Also, you get to solve a murder mystery at one point, and that’s pretty rad.

My biggest concern about the writing in Ys 8 — and this is an issue for the series going forward as well — is that it feels like at least some of its occasional inanity may stem from the translation. Since 2010’s excellent Ys: The Oath in Felghana, Xseed Games has handled localization duties for the franchise. NIS America takes over publishing the Ys series in North America with Lacrimosa of Dana, and though I have not played the game in Japanese and cannot comment on the actual accuracy of the translation, I feel comfortable saying that this entry features many more extremely awkward and half-baked lines than the last few.

If you like action-RPGs at all, you should give Ys 8: Lacrimosa of Dana a chance

Story has never been the pull of the Ys franchise for me, though, and if you’re not yet familiar with the series, it’s not why you should give this game a chance. And make no mistake: You should give Ys 8: Lacrimosa of Dana a chance. Developer Nihon Falcom has always been talented, but this project represents a new high for the studio, a game where each piece comes together and interlocks in a way that feels damn near perfect. Don’t let the obscure name fool you; forgettable story aside, this is one of the best action-RPGs of this generation.

Our review of Ys 8: Lacrimosa of Dana 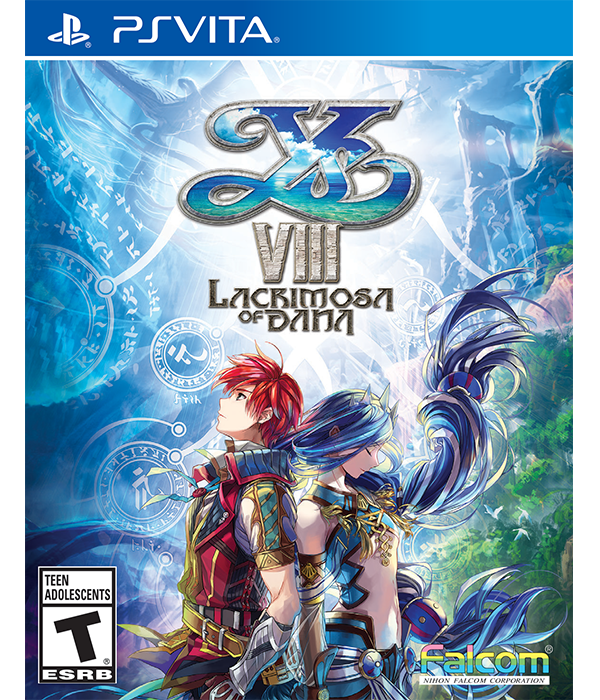