A flawed hero returns in a game that’s ... kinda fun

Review and information for Knack 2

Big is best, especially if you’re small. The transformation from teensy to towering is a common fantasy among children, a microcosmic representation of the magical process they’re actually going through.

Kids love dinosaurs, monster trucks and gargantuan robots. In adults, rapid growth is a useful metaphor for the revenge of the powerless. The “little guy” who makes it big.

So Knack 2’s core concept of a tiny little chap who can grow into a giant is attractive.

For those who care about such things, the game also comes with an interesting development story. The first Knack was rushed in development for the launch of PlayStation 4. It was a disappointment. Many criticisms at the time were levied against how poorly it exercised the central character's biggest attraction of being, well, big. It was also repetitive and soulless.

Director Mark Cerny is an old hand at cartoon platform-combat-puzzle games. His resume includes Sonic the Hedgehog 2, Crash Bandicoot, Spyro the Dragon and Ratchet & Clank, as well as the original Knack. Allocated a decent development schedule for Knack 2, he’s avoided many of the problems that plagued Knack’s design. This time around, Knack gets to spend a lot of his time being the big guy.

A tiny little chap who can mutate into a giant is an attractive concept.

In Knack 2, bad goblins are energizing long dead robots in order to conquer and destroy the world of humans. Knack and a small band of human sidekicks set out to thwart the goblins.

This quest takes them on a journey to a variety of locations, from lush forest to modern city to factory complex. Geographic diversity is standard fare for the arcade platform genre. It’s pretty clear why such lavish variety is deemed necessary. In practice, each level is really much of a muchness. Knack 2 does not entirely avoid the problem of repetition, but it’s made a good fist attempt of at least trying to mitigate this generic problem.

Here’s the general rhythm of the game: Knack, at around human size, enters and fights low level guards. He makes himself small and penetrates the inner workings of an installation via pipes and platforms. He goes back to being normal size fighting his way through rooms and corridors. He solves physical puzzles. He smashes crates in order to find junk (“relics”) that make him gradually grow to 20 and 30 feet tall. Previously onerous enemies are swept aside with ease. At some point, he encounters a giant boss, or lots of smaller bosses, or both.

He also seeks out raw materials that he can use as defensive shields, or as currency for combat upgrades and new moves. Along the way, he'll transform back to smallness where necessary, usually to get through some barrier. Puzzles present themselves on a regular beat. They often involve moving a box from one place to another to create a jumping point.

Weight puzzles are also common, complexified slightly by Knack’s ability to incorporate other materials into his body, like ice and iron. These give him special abilities that mix up the puzzle mechanics. Generally speaking, the puzzles are fun, if slightly repetitive.

This is a world of moving parts, and so Knack often finds himself facing platforms that wheel through nasty impediments, like noxious gas blasts, stomping vices and giant rolling rocks. These are all realtime exercises in watching kinetic patterns, something I enjoy. There is a smooth exactness about his movements, an essential element in platform games.

As I play, I have no control over the camera, which reels and pans according to the developer’s direction. I seem to have spent the last few years playing games with camera control, so this took me a bit of getting used to. On some occasions, the camera is placed weirdly, making platform moves frustrating. But on the whole, it seems to work.

Knack 2’s platform-puzzle formulas are an amalgam of decades of evolution in platform games. Yes, they are familiar, but their familiarity is also manifested in the variety of things to do. This game is a bit like those old compendiums of board games, like chess, checkers and dominoes. You know what you're getting, but it's still kind of neat to have them all in one package.

Knack 2 is a scripted, linear experience. I work my way through its puzzles the exact same way as any other player, seeing all the same things. On the other hand, the combat system offers plenty of individuality.

At the beginning of the game Knack’s moves are basically punch, kick, swerve and block. Over the course of the game, these are augmented considerably. Via an upgrade tree, or through narrative gifts, he learns to body slam and to hook enemies. The swerve adds a punch. The punch adds multiple punches, which are later improved further into “ultimate” punches.

Individual attack moves are two-button affairs, easy to pull off, but powerful when combined with defensive moves, or the ubiquitous swerve, which is the most essential move, by far, especially on more difficult modes. Quite often, the best way to defeat an enemy is to literally get around it, and kick it in the ass.

Knack 2’s best idea is to offer four different levels of difficulty. Easy and normal will find favor with younger, less experienced players, who ought to be able to get through even the toughest battles without too much trouble. I found the middle sections of the game spiked slightly in difficulty, as Knack encountered tougher enemies before he has won better moves, but not to the point of frustration.

Enemies come in a steadily ratcheted variety of difficulty, combining among themselves to create a varied palette of challenges. Ultimately, my health regenerates, while theirs does not. This is the case with the big bosses, whose patterns are pleasingly readable after a few false starts.

Despite these big set pieces, Knack spends a lot of time coasting through levels, swiping small posses of enemies aside. Although this offers little challenge, it's also satisfying.

He is at his best when he's huge and just smashing stuff up. This is what I've come to see and to be, a giant who stomps his way through life. It wouldn't do to make a whole game focus on this one pleasure, but Knack 2 delivers enough of these moments to balance with challenging fights and restful periods of puzzle solving.

Once the game is complete, I go back and try different levels at different difficulties. I can also replay the whole game with all the powers I've earned in the first play-through, which is great fun.

And there's a neat co-op mode in which two players combine to deliver special moves, like creating explosions or launching one another at the enemy. I played this mode with one of my kids and we had a blast.

It’s interesting to me that Cerny is an engineer at heart. He worked as lead architect on PlayStation 4. So it's no surprise that the best parts of Knack 2 are those that are specifically systems-based, such as the exactitude of its platforming sections and the quality of its combat mechanics.

Combat moves and platform sequences are all delivered, shining and smelling agreeably of grease. I found one gameplay bug, but other than that, Knack 2 is polished and highly competent.

But the story is a different matter. It's atrocious. No cliche is left alone; all are dragged into the sunlight, screaming for mercy. The dialog comes at me like a 1930s sci-fi short. Villains actually rock back their heads and declare that you are about to "meet your doom." If it's supposed to be ironic, it's not ironic enough, especially for a generation of kids saturated in irony.

The human sidekicks spend most action sequences literally standing in the background. As the game moves on, they are given narrative roles that augment two-dimensional personalities and trite relationship conflicts. One character is there to provide comic relief, but he's not funny.

The whole story feels like it was written by a bunch of scientists who crammed "The Hero With a Thousand Faces" and binge-watched Spielberg movies.

The plot slings itself forward through more works of engineering. Problems are solved by building things. More problems are provided when more things are built. It gets a bit tiresome.

Knack himself is a work of engineering, an amalgamation of nuts and bolts. He's a conundrum. Both his parts — tiny and huge —have entertainment value, but as a duality, they don't make much sense. They fail to come together and very little of the game’s story takes advantage of his split personality.

The baby Knack is mute and cute. The big Knack is aggressive and humorless. His eyes constantly have the quality of a man in a TSA line, absolutely certain he's not going to have time to grab that latte on his way to the gate. It's not that I don't like Knack. He has moments of charm. But he's certainly not a classic character. He’s a bit of a dull fellow, really.

Knack 2 is polished and highly competent

Knack 2 is an entertaining platform game like those of yesteryear. It's been created with due care and attention. Sure, it’s old fashioned, and its story is appalling. But it’s a reminder that the character-led platform combat game is still alive and well. Despite its good looks, it’s more a work of engineering than it is a work of art. But, as my kid said to me after we'd mashed our way through a co-op level, it's kinda fun.

Our review of Knack 2 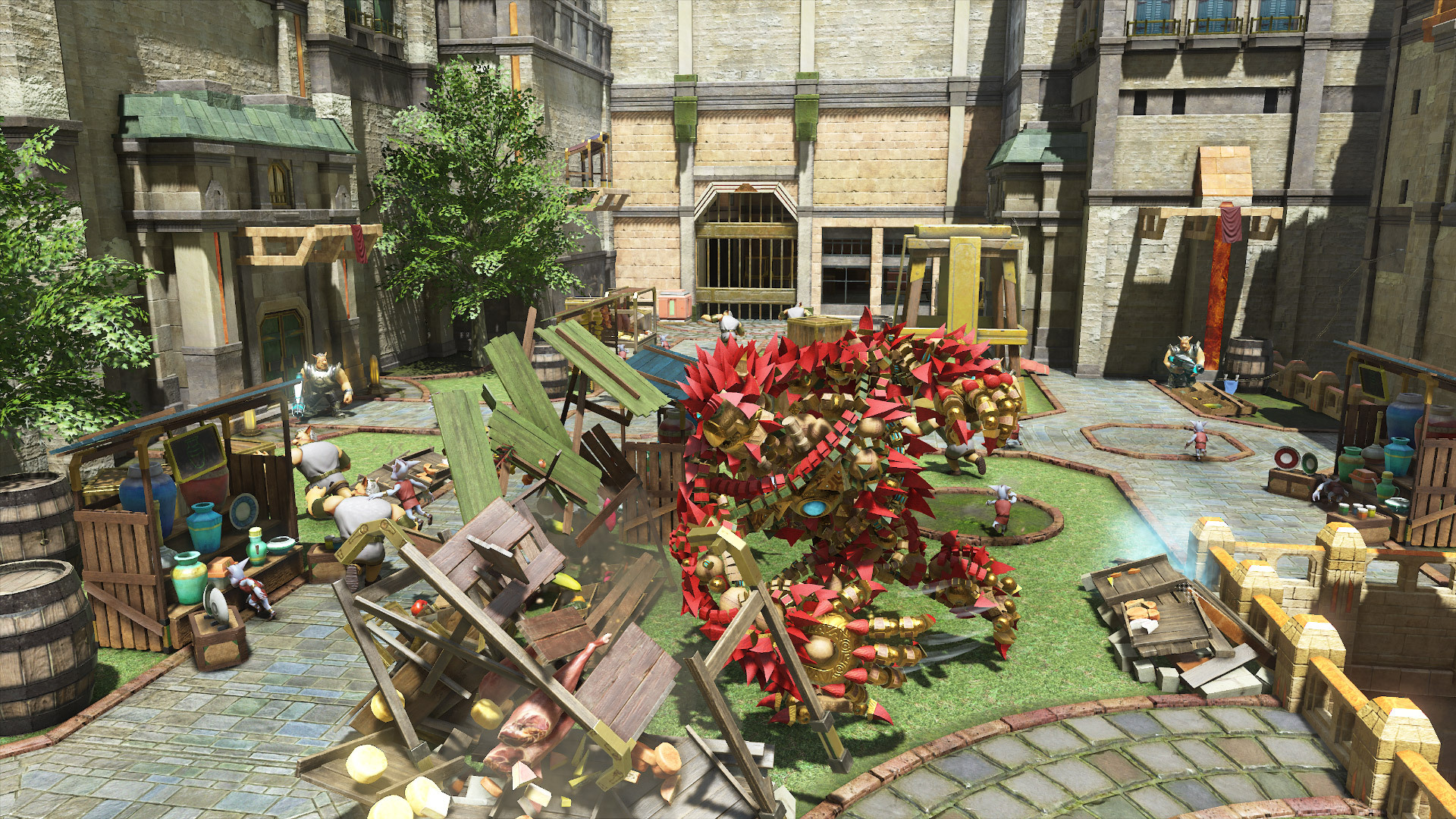