With the release of Dragon Ball FighterZ, Akira Toriyama’s classic series has found a form of representation to rival its comics and cartoons. FighterZ looks and feels like the most faithful representation of the Dragon Ball universe we’ve seen in video games.

I’ve played a handful of the Dragon Ball fighting games in the past, as early as 2002’s Dragon Ball Z: Budokai, and I was never impressed. There was always a disconnect between the level of visual flair in the cartoons and what I saw in the games. So when I heard that Arc System Works, a company known for its stylish fighting games, was working on a brand new Dragon Ball game, I was eager to see what it would do. Arc has already created one of my favorite fighting game franchises in Guilty Gear, and the company blew me away with what it did with the Persona fighting games. I couldn’t wait to get my hands on the team's interpretation of Dragon Ball.

Sure enough, the wait was worth it. Fighter Z’s action marries the intensity of Dragon Ball’s battles with Arc’s history of exciting fighting games. Everything you do delivers screen-filling spectacle, from one-button attacks to literally earth-shattering moves that dramatically end matches. Arc’s pedigree for making some of the best-looking 2D fighters on the market is on display in full force, and what it's done with the source material is special. Various attacks and character poses are ripped straight from the comics and cartoon, which is a treat for longtime fans of the series.

This visual hype machine thankfully ebbs and flows, with a handful of design decisions that pace the game appropriately for experts and beginners alike. One of the best examples is how Dragon Ball FighterZ handles its three-versus-three system. Each battle has two trios squaring off until one team is completely defeated. To ease the flow of the intense combat, a transition animation is inserted whenever a player is knocked out and a new fighter takes their place. This breather is a nice touch, given how hectic the battles can get. The transition between characters helps players mentally reset before the next stage of combat begins.

These types of small but noticeable design decisions might be the most striking thing about the game: FighterZ feels like it’s finely tuned to woo fighting game aficionados and lure in Dragon Ball fans, who might not be experienced brawlers. The intense combat is rewarding for experts, while little changes to the typical fighting game formula make this title more approachable for beginners.

Newcomers will also benefit from another unique feature in the game: a shared command list. Nearly every fighter’s move set is the same, which greatly cuts down on how long it takes to learn the game. At first, I thought that I’d have to go through the typical growing pains of learning the game’s unique mechanics before I could do anything even remotely flashy, but that wasn’t the case. Once I got my feet wet learning how one character operated, almost all of those skills transferred to the rest of the cast.

This shared template removes the barrier of having to memorize unique commands for each character. Instead, players have the freedom to instantly explore what every character can do with very little extra to learn. For instance, the same command that makes Goku shoot his legendary energy blast allows Captain Ginyu to summon the other members of his squad to attack. The same button that makes Vegeta fire an energy ball allows Piccolo to stretch his arms and grab his opponent. This simplicity makes it possible to learn the basics of a character in seconds, instead of having to constantly pause and check a command list.

This design decision removes one of the other stumbling blocks casual players often encounter in team-based fighting games: switching characters in the middle of a fight. Because FighterZ is a three-on-three game, players have to learn how to play as at least three characters. Even if casual players don’t make use of the game’s character switching mechanic midfight, they will inevitably be thrown into the shoes of a different character when one member of their roster is defeated. This might seem overwhelming for beginners, but the decision to make every command list nearly identical makes fluency among multiple characters easier.

Outside of spending hours in training, FighterZ’s story mode is a great place for new players to ease into using multiple characters. It also shows off the game’s mechanics one at a time in a controlled environment.

The story mode is broken up into three unique chapters, each of which has you taking control of various characters in the Dragon Ball universe. The premise of the story mode is a tad confusing, but through mysterious reasons, Goku and his pals end up being knocked out all at once. As the player, you are somehow “linked” to Goku, and you must travel around the world reviving your friends and squaring off against evil clones of yourselves. Because you can mix and match characters in your roster, the story mode offers some unique moments of dialogue as characters who normally wouldn’t interact share quips and references before encounters.

the story mode’s pacing might be a drag for experts, but welcomed by beginners

Battles in story mode are chosen by the player on a map screen that has multiple routes leading to a story-specific fights that will move the plot forward. If you’re still getting your bearings, then the ability to choose how many fights you want to do will be welcome. However, if you’re already comfortable with the game, some of these forced battles against various fodder can get tedious. All of the story mode fights offer experience points and the chance to earn power-ups that you can use in future single-player battles, but I never felt a noticeable difference, no matter what level I was or what I had equipped. At best, going through these additional fights gives you more opportunities to see various characters chat with one another. Otherwise, these needless and easy bouts feel like they are slowing you down as you fight your way to the battles that contain the anime-quality cutscenes.

Arcade mode is a different beast. For players looking to battle against the computer, you get your pick of three courses of varying difficulty. In each, you face off against a handful of the game’s roster, and the opponents' difficulty is determined by how well you do. While the latter half of each course can become devastatingly challenging, the arcade mode is a great place to practice your skills against computer-controlled opponents who can put up a fight — unlike story mode, where the bad guys are pushovers.

If you’re looking to take your skills online, there’s a few things you should know. FighterZ uses a nontraditional menu system, so instead of your typical menu, you’re dropped into an online lobby when you start the game. A lobby is a pool of 64 players within a specific geographical region, and it acts as the game’s menu. This system has its perks for players more inclined to fight online, as it makes it easier to consistently face off against eager opponents. However, if the game is having issues trying to connect to the servers, you’re going to experience some problems.

If you happen to start the game offline, it will take a while to even boot up. The game seems to be trying to connect with the server, and experiences some serious slowdown when it doesn’t get a response. Local tournament organizers should take note: If the game cannot connect to its servers, it eventually gives you the option to start in an offline lobby, but there currently is no way to pick this option as a default.

Once you’re in a lobby, you can access every part of the game. You control a cute, miniature version of your favorite Dragon Ball character within the lobby; you can trot to different areas to access all of the game’s content, like training, story mode and of course, the online features. After the initial novelty of running around wears off, you can warp to whatever section you like through a standard menu.

FighterZ gives you a handful of ways to get opponents in front of you with varying degrees of success. Casual and ranked play are the simplest methods to get your online fighting fix. Once you set your search parameters, you can waddle around the lobby and mess with certain modes until you’re eventually matched with a player. Fights start quickly thanks to the matchmaking system forcing you to choose a preset team while the game locates a competitor. The battles themselves are pretty straightforward, but FighterZ does add a small feature that I greatly appreciate: a visual display of your frame delay.

The frame delay counter is a great feature for online play

Dealing with lag is simply part of playing games online. The most common way fighting games address this issue is by displaying a meter approximating each player’s connection speed. While helpful, this method is broad and doesn’t accurately indicate the moment-to-moment lag you might experience. In FighterZ, you’re shown a running display of the current match’s frame delay as it fluctuates. This feature precisely illustrates how many actual frames of lag you’re experiencing at any given moment. For casual players, this will give them a more granular awareness of how much lag is currently affecting their match. For more experienced players, understanding the exact frame delay will be helpful in modifying strategy on the fly, as combos that demand precise timing may be difficult to do with significant lag.

While the frame delay is a smart addition meant to improve online play, I was amazed at how a much simpler feature had a frustrating implementation. Throughout the opening weekend of the game’s launch, I was completely unable to fight against any of my friends one-on-one. The process is needlessly complicated, and I couldn’t get it to work at all.

In order to square off against your friends in FighterZ, you have to meet several conditions. First, you need to be in constant communication with the other player, as you have to coordinate on which lobby to enter — provided you can both find a lobby in your region with two vacancies. When you finally enter a lobby with a friend, you have to create a “ring,” essentially a private lobby within the lobby. Once it’s created, your friend then has to find you in that lobby and then, finally, enter the private code you set up.

These hurdles aren’t monumental, but they’re enough to make the process feel cumbersome. Despite repeated attempts, I was never able to actually get a friend into a private match with me, and I had varying success entering other players’ lobbies. Bandai Namco is aware of the problems and will hopefully address them in the weeks to come.

Despite these issues, Dragon Ball FighterZ made me feel as powerful and unstoppable as one of the series’ lauded heroes. Within minutes of playing the game, I was pulling off combos that I felt were worthy of a highlight reel. Part of that is my experience with fighting games, but I believe most of it has to do with how Arc System Works designed the game to feel like its source material.

Dragon Ball as a series has always forefronted epic battles. In each episode of the cartoon, godlike warriors transformed the landscape in fantastic one-on-one fights with ease. In FighterZ, anyone can feel like that in any fight. I’ve been waiting for a Dragon Ball game like this ever since I first saw the cartoon in grade school, and I’m so happy this day has come.

Our review of Dragon Ball FighterZ 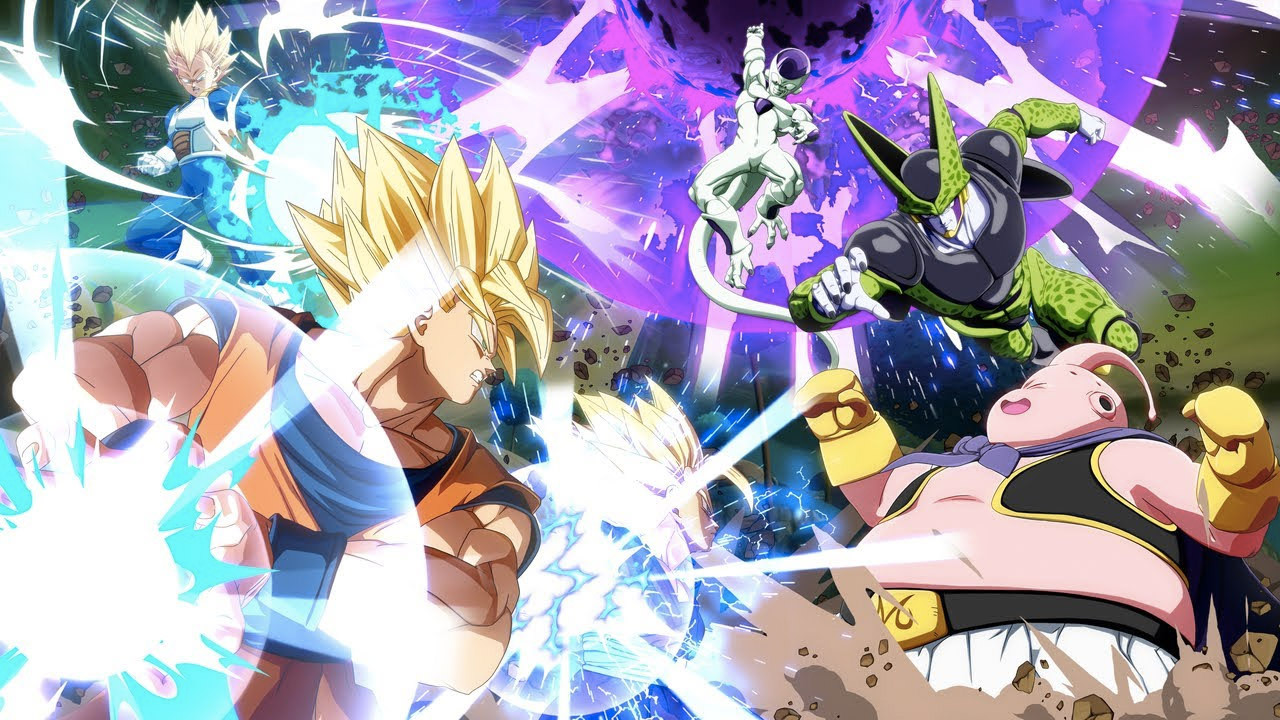