Intense moments stand out from a grinding career and multiplayer

Going through the replay in an early match of EA Sports UFC 3, I caught a look I’d never seen before in a sports video game: hate. Clean, old-fashioned hate.

My opponent had leaned the wrong way, connecting my spammed roundhouse kick to her noggin. The blow staggered her, a computer-generated bantamweight. In similar situations in most video games, I’ve seen a vacant stare or comically gritted teeth. But that look — I really believed that she was pissed, and that if I hadn’t finished her off right there, I’d be the one regretting it.

The moment lingers with me because it compactly summarizes UFC 3’s biggest appeal. The fighting action and the visual environment are better than ever, and sell the game far more than any of the other reconditioned features surrounding them. Within the octagon, the striking delivers the fun far more than the grappling or the submissions, which are largely unchanged from the game’s predecessor of two years ago. Big hits and stunning blows have always been central to the series, but in UFC 3 they look more connected to something determinative — the meeting of skull and tibia, for example.

In this way, the meaningful improvements to UFC 3 are mostly surface-level, which is not to say that they’re unnecessary. Fighters’ expressions are consistent with the moment; a luxurious pre-fight presentation communicates that both fighter and fight are now a Big Deal; and the sounds of fist to face, foot to midsection, are meatier, thwackier and more connected than 2016’s EA Sports UFC 2. This visualization extends beyond the match. In the career mode, players can round out their emergent narratives with peripheral distractions like social media and training obligations, though it still comes off as anodyne compared to the rowdy real life of the UFC between big events.

UFC 3 wants nothing more than to look the part, to appear like a believable facsimile of the real thing. The game’s Ultimate Team mode incorporates real fighters, making it a more intriguing proposition for fans of that game type. On the whole, UFC 3 is an order of magnitude above UFC 2, which offered a spare career experience and a pro forma Ultimate Team adaptation and, even two years later, remains bothered by glitches and stutters.

But for anyone other than a serious fight fan, the honeymoon with UFC 3 is short. Career, rebranded as the G.O.A.T. Mode, comprises several stages of a fighter’s rise through his or her weight class. There are now long-term goals to check off, rivals to face down and contract bonuses to earn, all good things. Yet by the 10th fight, the repetition and grind became obvious. In Ultimate Team’s single-player championships, after I got my ass kicked for the sixth time, I realized that mode was more about remembering which moves a fighter had available than it was executing them. And in straight-up multiplayer, I came to understand that a simple hands-up guard is plenty enough to frustrate a striking mentality, which is most everyone’s first approach. UFC 3’s long-term experiences — Ultimate Team and Career, mainly — are still enjoyable, but they require a serious interest in the sport and a tactical, instinctively applied knowledge of moves that is akin to a card-counting blackjack player knowing when to stand on a 14.

G.O.A.T. Mode is deeper than its predecessor, and even evokes distant cousin EA Sports MMA (launched in 2011) in the out-of-the-octagon training choices and lifestyle it tries to create. The narrative still unfolds mainly through menu choices and the occasional full-motion video cutscene. But there is a genuine management layer inside. Before each bout, players may set the length of their training camp (anywhere from one to five weeks) and then choose a gym — provided they can pay the membership there — whose sparring partners and fitness classes build up fighting traits that are both specific to a certain style and generally useful.

Players can spar with a gym trainer to unlock a secret clue about their next opponent’s strengths or tendencies, but they really can’t spar more than once per camp without going into an overtrained or exhausted state that is tough to recover from. In fact, when players are choosing from three offers for the next fight, they only see a fighter’s ratings in three broad categories. They don’t know his or her fighting style (brawler, submissions, striker or whatever). That was fine with me; there needs to be an element of mystery going into the next bout, to encourage players to round out their fighter instead of focus on one or two attributes.

Inside the octagon, regardless of mode, UFC 3 enforces its uncompromising, hard-hitting action and a genuine struggle when the combatants close in or go to the ground. The real problem is that the struggle is still not that understandable. In UFC 2, EA Vancouver tried to simplify moves within the clinch — the state where two standing fighters lock up — and ground wrestling. These two phases of MMA are largely the same in UFC 3. When grappled, the player is encouraged to push in a direction on the right thumbstick to defend a takedown from a standing position, for example, but I still rarely saw on-screen information pointing me in the proper direction. I don’t know if it’s because my fighter’s defense attribute was so low that she didn’t have the opportunity to thwart a takedown. I just know I saw an unhelpful indicator telling me to get on the right thumbstick, but no advice on where to push it. So I frantically wiggled the stick as my fighter inevitably went to the mat.

On the attack I re-learned, after several bouts, the recipe for going from a clinch to a single-collar headlock to a Thai clinch — and then learned to put my knee in the other dude’s jaw for maximum effect. The last two are discrete acts that will require a specific move card awarded in Ultimate Team’s loot crate economy, by the way. The problem is that the blow was so jarring it broke my hold on the other fighter, which wasn’t what I wanted at all. My opponent staggered backward, and got a long moment to recover his protection and effectively reset a bout I had controlled totally. In human-controlled multiplayer, this was especially frustrating.

UFC 3’s fighting improves the MMA realism its predecessors strove for, but against live competition or any respectable difficulty setting, there are times when the game is challenged to maintain balance. In career mode, playing as a strike-oriented fighter (as most will), I was routinely beaten by CPU opponents with an edge in grappling or submission attributes, who simply ran up, grabbed me and took me to the mat.

This became a problem at the prospect stage of my fighter’s career when I was given real-life fighter Julianna Peña as my rival (ranked 15th in my game; IRL she is No. 3), leaving me to wonder what I had done to piss her off. I felt that the game had set me up to lose, and indeed my climactic bout with Peña began with a movie about rivalries and how MMA fighters are usually defined by those who push — and defeat — them. There are seven stages in the career mode, and I understand that to breeze through them all undefeated would create a wildly unrealistic story. Still, UFC 3 begins as most sports video games do, with a have-it-all fantasy. The difference is, this game knows it can’t really support that.

I chose a woman for my career fighter because I wanted to see how that mode served that division compared to the men. Women fighters have been in EA Sports UFC from the first game in 2014, and were available in the career mode back in EA Sports UFC 2. But this year feels like a breakthrough thanks to the deep training, management and social media options woven into the career, for both genders. It’s fun to think about your fighter, male or female, selecting a gym for their training camp, choosing a specialty or working on a weaker part of their game, then meeting fans at a restaurant or predicting the round in which they’ll finish their opponent.

In the pre-fight presentation, I legitimately got nervous, worrying about the other fighter’s strengths

This culminates in an over-the-top pre-fight presentation that feels earned, from ring announcer Bruce Buffer saying “it’s time” if it’s a title bout, to sweeping views of the arena and a strikingly animated crowd. In big fights, I legitimately became nervous, worrying about the other fighter’s strengths, and not wanting to humiliate the one I’d brought this far.

In multiplayer, most will button through these cinematics to get on with the action. I did, and I found a harsher reckoning of my ability than in the career mode. There were bouts where I had nothing to offer and I could almost see my opponent figuring it out, realizing that kicks to the legs do not recover damage and my fighter was too slow to get his block down against them. In another multiplayer fight, this one in Ultimate Team, my opponent had the Thai clinch super move that bypasses the usual grappling cadence and moves straight to ramming a knee into my head. That said, I also had my share of online fights where I staggered my opponent with strikes to the jaw, then mounted him and rained down the punches.

Multiplayer is only for the confident, in other words, and that confidence is complicated by a frustrating lack of opponent knowledge. In Ultimate Team’s single-player challenge tournament, which is fought against other users, I had no idea who I was facing until they showed up in the octagon. That can be a really nasty surprise, especially if the opponent has one of the five super fighters offered for pre-ordering the game (they’re only usable for five fights, though). And in Ultimate Championships, another ranked mode within Ultimate Team, I knew neither my opponent nor which of my four fighters would be going into the ring. This compounds the Ultimate Team metagame, which isn’t just acquiring different moves for one of four fighters; it’s also remembering which ones are available to him or her.

UFC 3 is a lot like real fighting in the sense that the player must be intimately familiar with their strengths and weaknesses, and introduce new techniques by focusing on them one at a time, fight to fight. It requires a lot of losing to git gud. The demands may be tough, realistic and even admirable, but they effectively restrict the player to a single fighter or mode they know best, if they want to have any success or feel like a winner.

Even with simplified grappling and submission controls carried over from the last edition, EA Sports UFC 3 is probably the least pick-up-and-play game in the sports genre. It takes real dedication, and understanding of one’s fighter, to draw out the game’s virtues. But they can be found in the anticlimax of a career bout that ends in a fraction of the time spent training for it. For those who can take a staggering punch and remain focused on their game plan, EA Sports UFC 3 is as close as it comes to professional fighting, without the bruises and welts.

Our review of EA Sports UFC 3 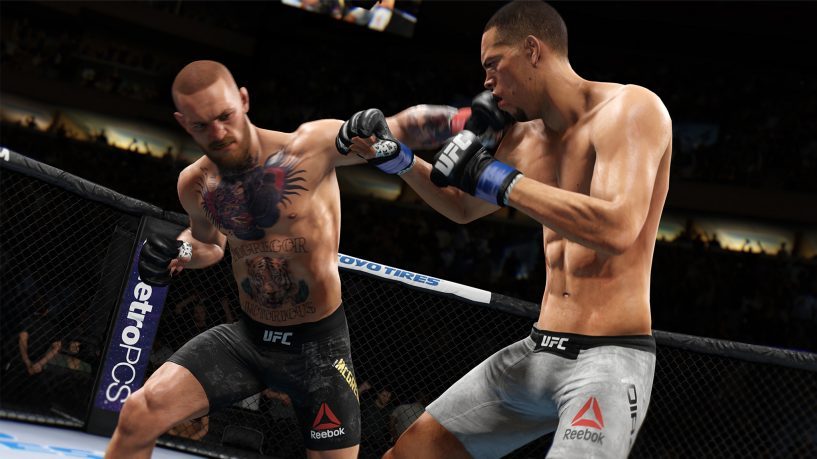