Review and information for Descenders

Looking out over the lush forests from the starting cabin, it’s easy to get lost in the beautiful landscape of Descenders. It is inarguably a visual masterpiece, and developer RageSquid has rendered the mountains, hills and jump ramps with exquisite attention to detail, something I didn’t expect from such a studio best known for the crude humor of 2015’s Action Henk.

Descenders, which launches into Early Access on Steam today, is a game about riding bikes down hills very fast, in first or third person. When the game is in its stride, each run feels like a mechanical playground: You’re barreling down slopes, swinging into turns and performing aerial stunts on anything you can launch yourself off of. Unfortunately, Descenders stumbles in trying to craft an entire game around that core mechanic, and when the honeymoon of flips and downhill drifting wears off, the cracks begin to show.

The game is centered around the randomization of each run down the mountain. Not only are individual courses randomized by level of steepness, curves and stunts, but the routes available as you progress through a world are similarly unique to each run. Complete an entire run in a world without bailing out too many times, and face a boss level — a steep and challenging course ending in a gargantuan mega-jump.

Levels in each run vary due to their procedurally generated nature, but all contain a few staple obstacles depending on the world that they’re set in. In the Highlands, grassy fields are interspersed with quarter pipes and wooden ramps, and even the occasional castle tower jumping challenge. The Forest, the second world, adds jumps through firewatch towers and twisted bridges over rocky pits. Four worlds are available in total — the aforementioned Highlands and Forest, and the latter-game Canyon and Peaks.

Each level’s path has multiple checkpoints that, if passed through, will act as the respawn location after bailouts. These checkpoints are completely optional, though, and breaking from the path is always a possibility. However, going your own way might lead to missing out on some opportunities to score Rep points by pulling off a trick on a ramp, or nearly missing an obstacle that would otherwise bail you out, gaining you some ‘Near Miss’ Rep as a reward.

Reputation, or Rep, is the primary method for Descenders to mark your achievements. Rep pulls double duty in Descenders, acting both as a marker of skill (higher Rep places you in higher skill ranks) and also as a method of gaining new cosmetic items, some of which only drop at higher levels. New worlds are unlocked after beating the boss level of the previous world three times, but it’s Rep that acts as your marker of progress, both within levels and outside of them. It’s also the game’s most crucial stumbling block — it was nearly impossible in my play sessions to reliably gain Rep between runs, as Rep penalties are almost as plentiful as Rep opportunities.

You begin each run inside a world with 4 health. Collisions and botched landings lead to wipeouts, which knock off Rep and health, depending on the scale of the crash. Health can be gained by achieving secondary objectives assigned after each level — things like “do two backflips” or “finish the level without letting go of the acceleration.”

Light tumbles will only take out one health point and a couple hundred Rep, but scratch a landing on a boss jump and it’s not uncommon to lose about a thousand Rep and two (or three!) health points. When you undershoot a double backflip and land on your head, don’t be surprised to end up losing more Rep than you’ve earned in the entire run to that point.

This overly punishing design isn’t helped by the fact that quitting a run anytime before finishing the boss level at the end will incur another Rep penalty. Each run, even in the starting Highlands level, was a potentially disastrous one, with a single crash threatening significant damage to my Rep. There is an option to take a session as a practice run, which does not save Rep changes to your permanent profile but otherwise plays out the same a standard session.

Each run was a potentially disastrous one

After your first few runs, you’ll receive three offers to join one of the three biking teams in the game: Arboreal, Enemy, and Kinetic. Joining a team will allow you to make progress on the global leaderboards based on team allegiance, and add a level tied to the team’s signature focus to the pool of available levels. Playing the game before release meant that many of the multiplayer aspects were unavailable to me.

Between runs, you are free to explore the small training area, refit yourself or your bike with cosmetic items, or take a few trips down the three practice courses available in the small level. The various shirts, helmets, pants and bike decorations don’t affect the game’s play style at all, but do offer some venues of customization for your biker — who, it should be noted, is always a man. Sorry, nonmale bikers: Descenders does not offer any alternative player models.

The procedural generation of each level led to my other major frustration with Descenders: With each level being generated at the time of a run, there was no opportunity to become familiar , the track. Descenders’ clear design ancestors, genre favorites like Skate and SSX Tricky, were all known for bespoke levels with ample unique content. While they had none of the “infinite play” possibilities afforded by Descenders’ random generation, they felt more fleshed out and learnable.

Descenders’ tracks, by design, can’t be “learned.” Each session is unique from tracks to overworld paths, and more than I would’ve like to, I found myself frustrated with a turn that came too quick, or a jump that I didn’t have time to prepare for because it was obscured by environmental assets. In a game without procedural generation, wiping out would be a learning experience for the level’s design — once you know where that tricky section is, you can prepare for it the next time around. Descenders doesn’t quite allow for this, and with so few recoveries available in each run, levels would often end in frustrating, preventable wipeouts.

For the right player, this is probably less of a bummer. Descenders’ randomization does effectively convey the breakneck, twitchy decision-making that’s necessary when barreling down a mountain at 40 mph. Around any corner there might be a rock, or a dip, or just a turn taken too slowly, sending your character ragdolling across the landscape after being launched from his bike. Like any good extreme sports game, Descenders revels in the wipeout cam, slowing down the action and putting it into black and white after every ridiculous bailout.

Even with all the frustrations I had with Descenders, the core gameplay is still gracefully simple and pure. Picking up speed while whipping your bike around hairpin turns, just barely missing the trees off the side of the path, aiming yourself at a ramp like a missile and soaring tumbling through the air only to land solidly on the track — all of this feels so tight, so well-crafted that the less graceful aspects of the game stick out even more in comparison.

Descenders takes a valiant stab at integrating the fast-paced, stunt-focused gameplay of downhill sports with the procedural generation of modern games. Unfortunately, this combination robs the genre of one of its strongest attributes: handcrafted level design that players can dive into and learn from. This is balanced by tight controls and a slick presentation that keeps you from ever getting too angry at it — just make sure to not wipe out too hard.

Our review of Descenders 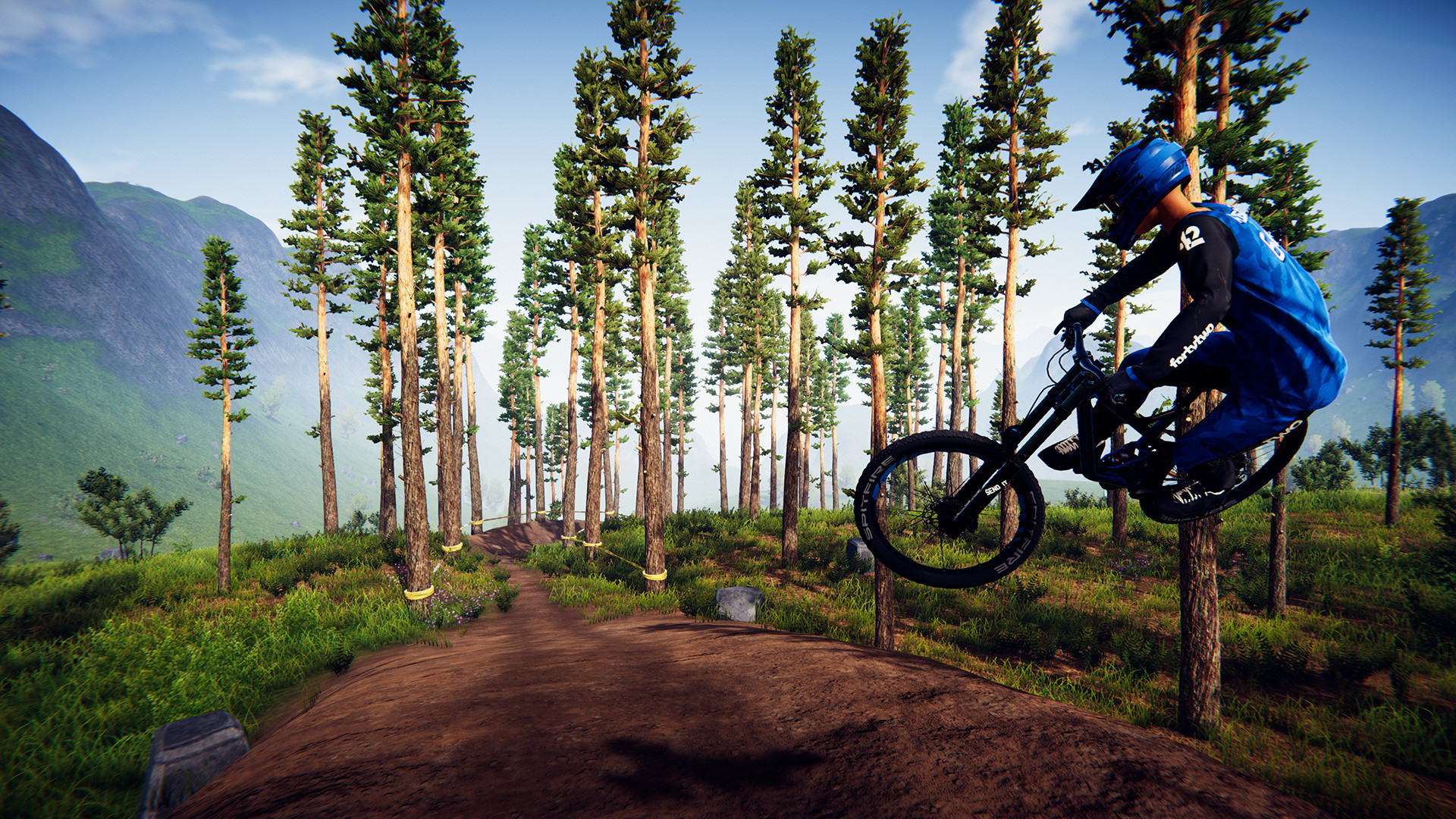