Gothcago: How The Dark Knight built upon an American metropolis

Share All sharing options for: Gothcago: How The Dark Knight built upon an American metropolis

Part of The Dark Knight at 10

On the occasion of The Dark Knight’s 10th anniversary, Polygon is spending the week investigating the comic-book blockbuster’s legacy. Why so serious? Because Christopher Nolan’s Bat-sequel gave us lots to talk about. This is the retrospective you deserve and the one you need right now.

I’m driving a red Prius on Chicago’s Lower Wacker Drive, carefully observing the speed limit and keeping a mindful distance from the other vehicles. But in my mind I’m on Gotham City’s Lower Fifth in Batman’s Tumbler, taking the turns at an alarming speed. I’m in pursuit and single-mindedly focused. And the other cars? They better stay out of my way.

It’s easy to make the imaginative leap from Chicago to Gotham thanks to director Christopher Nolan, who employed the Midwestern city as a stand-in for Batman’s hometown in both the 2005 film Batman Begins and its 2008 sequel The Dark Knight. He also used Chicago in strikingly different ways, rethinking his approach to Gotham between the two films and breaking with a tradition that dates back to the dark, art deco-inspired imagery of Tim Burton’s Batman and Batman Returns. Instead of reshaping the city in Batman’s image, he let it be itself.

The Dark Knight features the least-disguised superhero metropolis since, well, Metropolis in Richard Donner’s 1978 Superman, which let Superman fly through a city filled with recognizable New York landmarks. However counterintuitively, Chicago, subtly altered, is the right Gotham for Nolan’s Batman. On camera, it’s a sleek, modern cityscape barely containing the chaos threatening to bring it down, one that looks a lot like the city I’ve called home since 2001, one I’ve watched grow and change in ways both inspiring and alarming as it’s struggled to address its underlying imbalances and inequities.

It took some experimenting, and time spent shaking off an older approach, to get there. Batman Begins offers its first look at downtown Gotham in flashback. Riding with his parents on an elevated monorail, Bruce is told that although Gotham has been good to the Wayne family, the city has been “suffering,” and that the train they’re riding on is part of a Wayne-spearheaded effort to give the people new, affordable public transportation. The city is never allowed to forget the Waynes’ generosity. Bruce’s dad points next to a building at the center of it all, Wayne Tower. 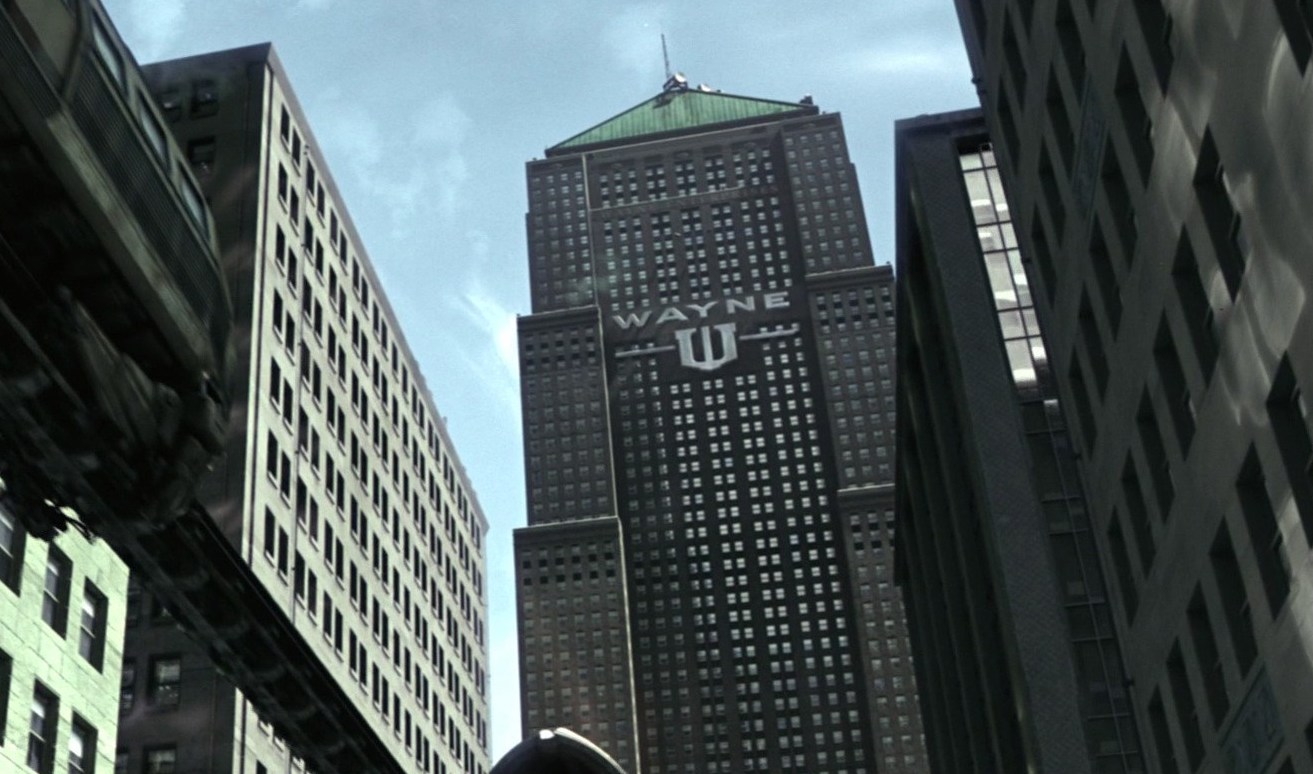 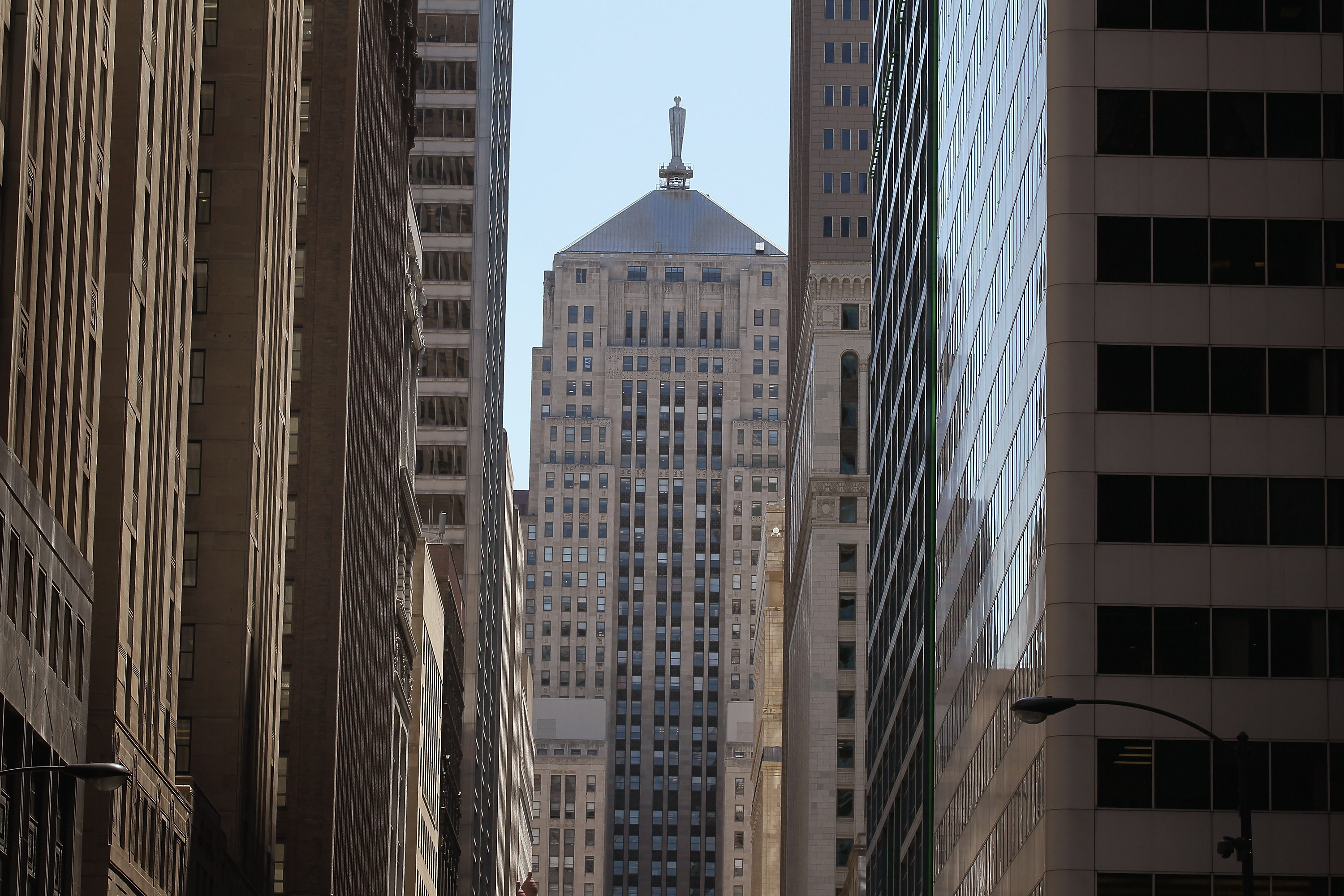 The train glides along a fantasy version of Chicago’s L train, using special effects to modify Chicago’s downtown Loop, a stretch of track that, as its name suggests, runs a ring around the heart of the city’s business district. Here it’s been expanded to three tiers and given a deco makeover that wouldn’t look out of place in one of Burton’s films, down to what appear to be stops made out of bronze arches. Similarly, Wayne Tower overwrites the Chicago Board of Trade building, with the filmmakers removing a clock and adding the Wayne logo to make its already imposing presence look slightly more forbidding. It could be a variation on the city Nolan grew up dreaming Chicago could be, during a childhood split between London and the Chicago suburb of Evanston.

By the time Bruce Wayne returns to Gotham as an adult — after spending years training as a crime fighter abroad — the whole city’s taken on an ominous cast. “This city is rotting,” Bruce’s childhood friend turned assistant district attorney Rachel Dawes (Katie Holmes) tells him. To illustrate this, she drives him through a stretch of Lower Wacker Drive. Later to be the site of The Dark Knight’s famous Batman-versus-Joker chase scene, the multilevel street is a haven for the homeless and others made desperate by the hold that organized crime has taken on the city since the death of Bruce’s parents and his subsequent disappearance. In real life, Chicago has earned criticism for the ways it’s dealt with the homeless population of Lower Wacker and other spots that have become shelters for the displaced.

It looks positively cozy compared to the Narrows, a slumlike district that is Batman Begins’ most imaginative overwriting of the Chicago landscape. Situated more or less where the city’s River North neighborhood begins on the north side of the Franklin Bridge, it’s a crowded, decrepit area modeled after Hong Kong’s now-destroyed Kowloon Walled City. The addition is made possible via computer effects and, like most of Batman Begins’ embellishments, it’s gone by the time of The Dark Knight.

There’s a possible in-story explanation for the change. Where Batman Begins depicts a Gotham that’s fallen into disrepair without the generosity of the Waynes, The Dark Knight takes place in one that’s begun to reap the benefits of the family’s rented attention, be it Bruce’s philanthropic efforts or his night job as a vigilante. It looks more polished and better kept, though not without its troubles, be they bank-robbing clowns, an untrustworthy police department or widespread corruption. In fact, it looks almost exactly like the Chicago I know.

Nolan doesn’t waste any time revealing Gotham as a changed city. The Dark Knight’s opening scene takes place in broad daylight, in buildings and on rooftops that have lost the previous film’s deco trappings. The Old Chicago Main Post Office building stands in for the bank targeted by the Joker. Opened in 1930 but vacant at the time Nolan shot the film, it still has the look of the sort of practical, sturdy, long-lived building that would still be in use years after it was constructed. (And, indeed, the real structure is. It’s set to house Walgreens’ national headquarters starting next year.) 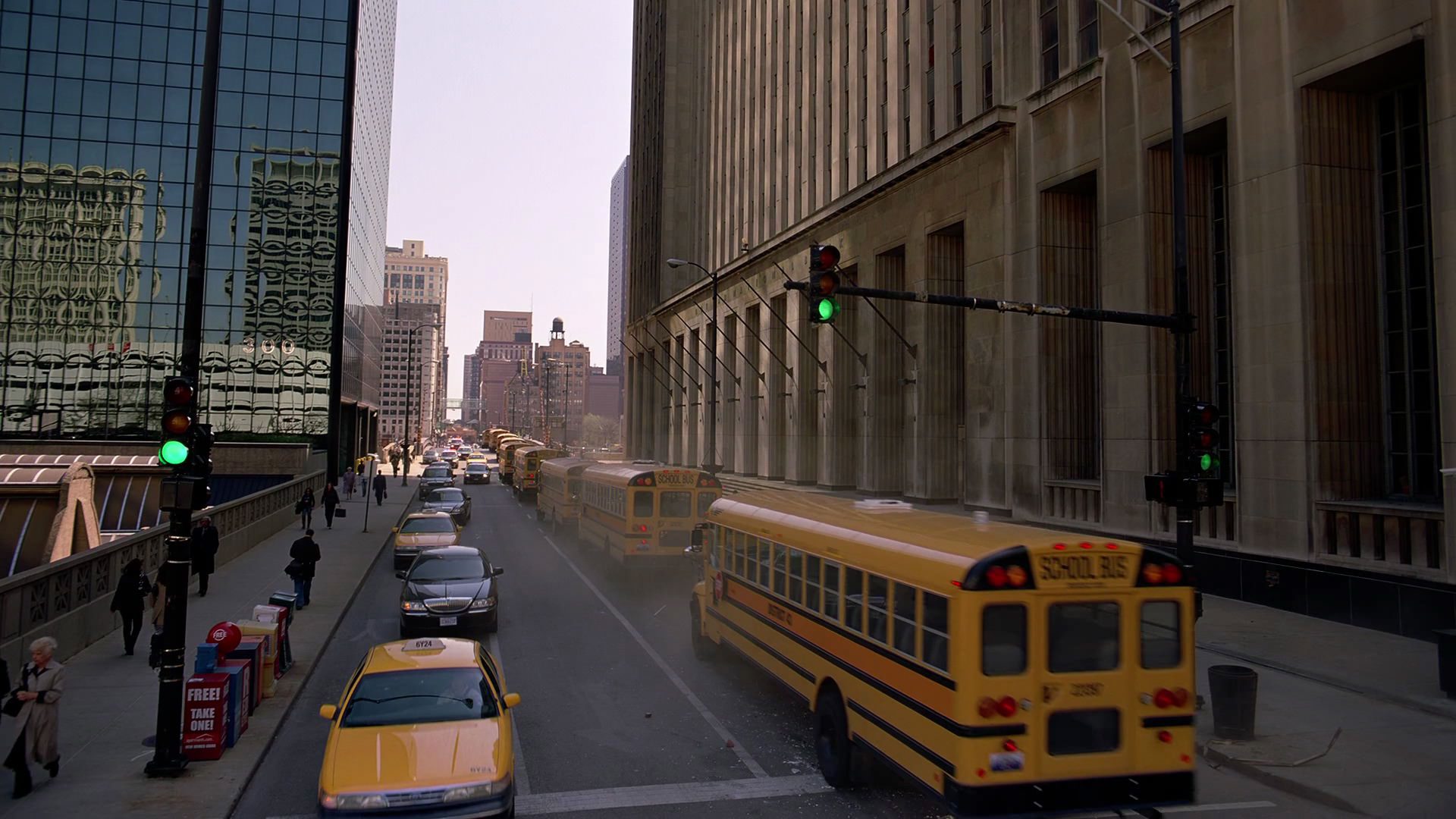 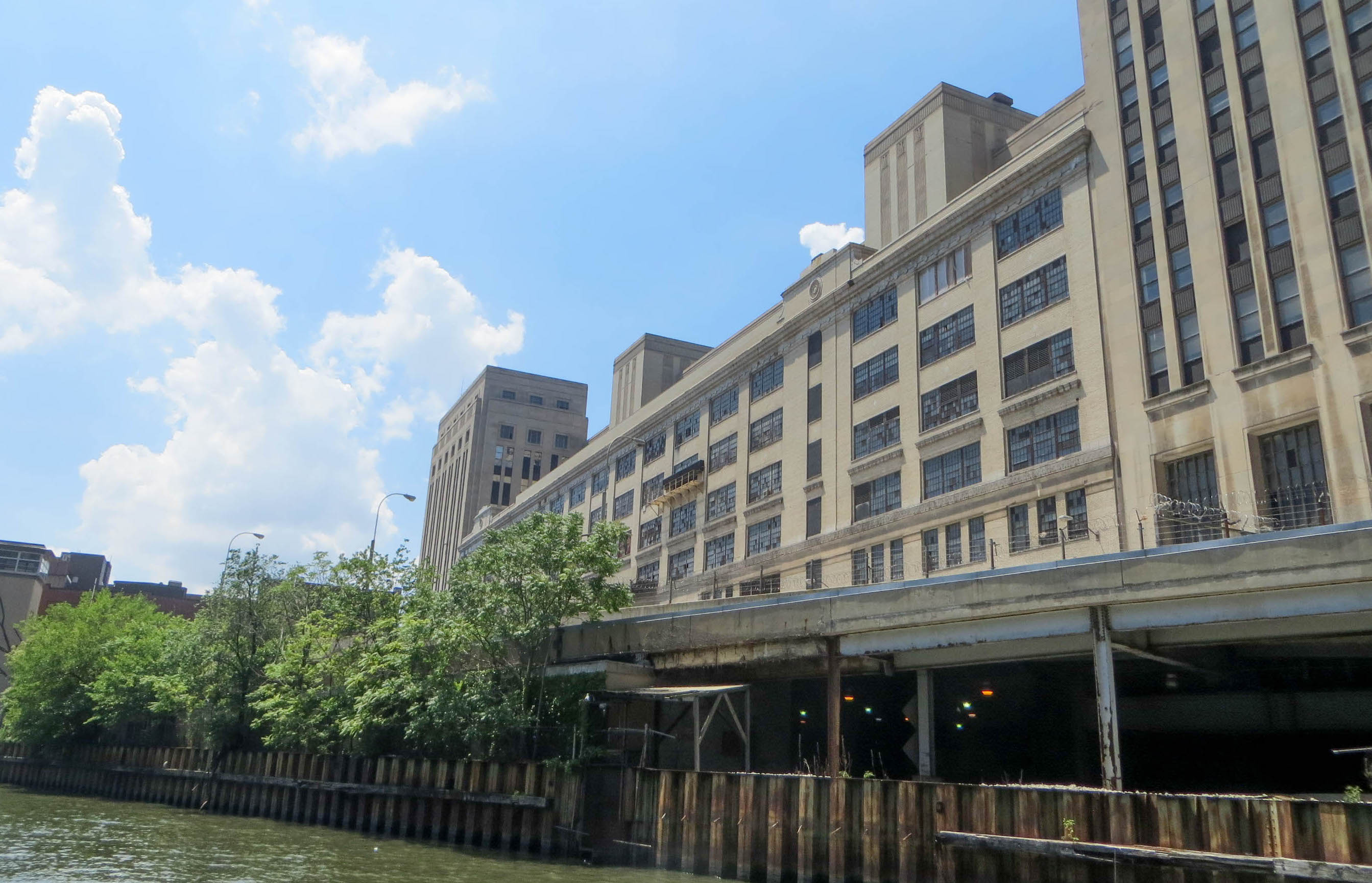 Nolan never lets viewers forget the bustling city surrounding the film’s characters. Harvey Dent (Aaron Eckhart) and Mayor Anthony Garcia (Nestor Carbonell) both work in offices overlooking the real-world Chicago River, their backs turned to downtown traffic. Even the night scenes take place in a Gotham more grounded in the real world. Early on, Batman confronts the Scarecrow in a parking garage that’s short on atmospheric shades and long on fluorescent lights. With no apparent set dressing, it looks like the sort of place downtown visitors have paid too much to park in too many times.

The Chicago Board of Trade reappears, but only briefly, having been stripped of its CGI facade and, apparently, no longer serving as the headquarters of Wayne Enterprises. That’s now housed in a much sleeker building: an only slightly modified version of the Richard J. Daley Center. Opened in 1965, it’s a towering civic center familiar to Chicagoans attempting to renew their driver’s licenses during a lunch break. 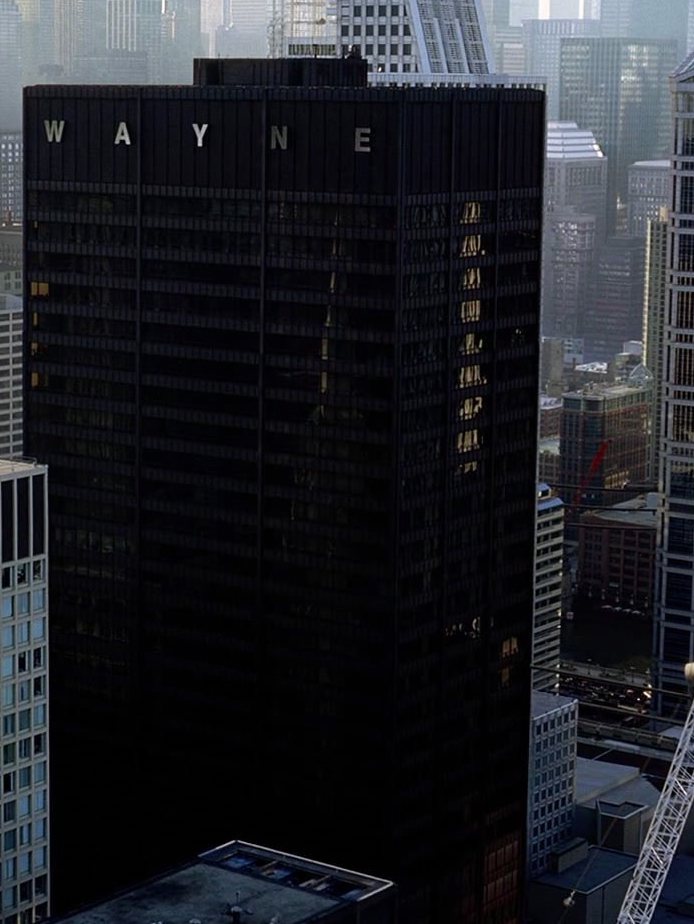 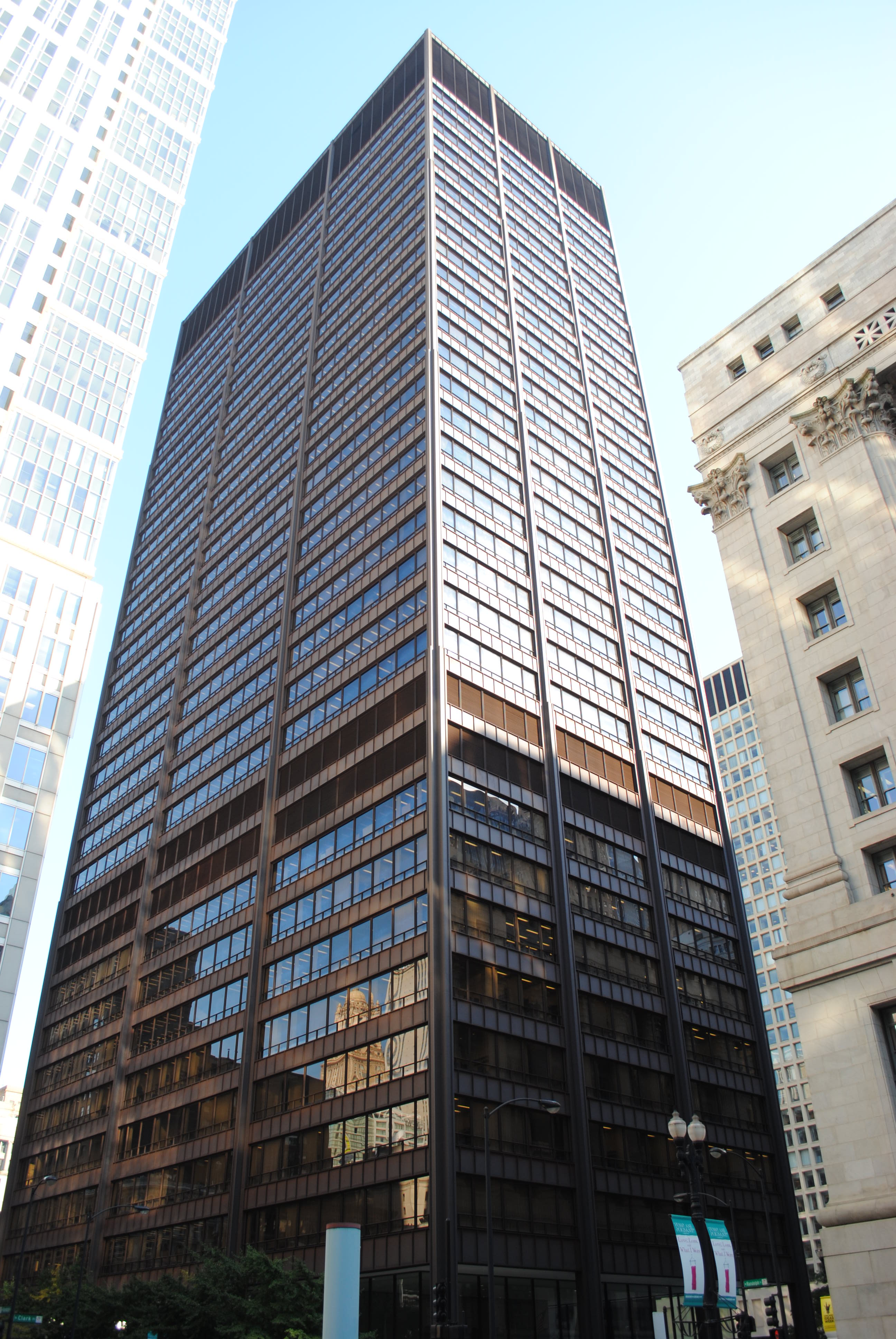 Other memorable Chicago landmarks include Lake Street, whose long stretch under the L has made it irresistible to filmmakers looking to stage a memorable chase scene in the city. Though it now serves as a magnet for those wanting to flip the bird to our president, the then-under-construction Trump Tower provides the exterior for the climactic fight scene. And it’s Chicago’s more or less unchanged downtown streets that serve as the landscape for some of the film’s most memorable confrontations, beginning with the memorial parade for slain Police Commissioner Loeb.

Then there’s Lower Wacker Drive. It’s the one spot that will always make me think about The Dark Knight, in large part because it looks just as it does in the film, a cavernous underground space kept in a kind of perpetual gloaming by artificial light. It also sounds much like it does in the film. Sure, I’ve never experienced bazooka explosions or gunfire, but one of Nolan’s smartest choices is the decision to strip away Hans Zimmer’s score — used so effectively elsewhere — and let the chase become a symphony of whirring motors and squealing tires, the sounds of ordinary city traffic dialed up to 10 and made threatening by the echoing of the enclosed space. 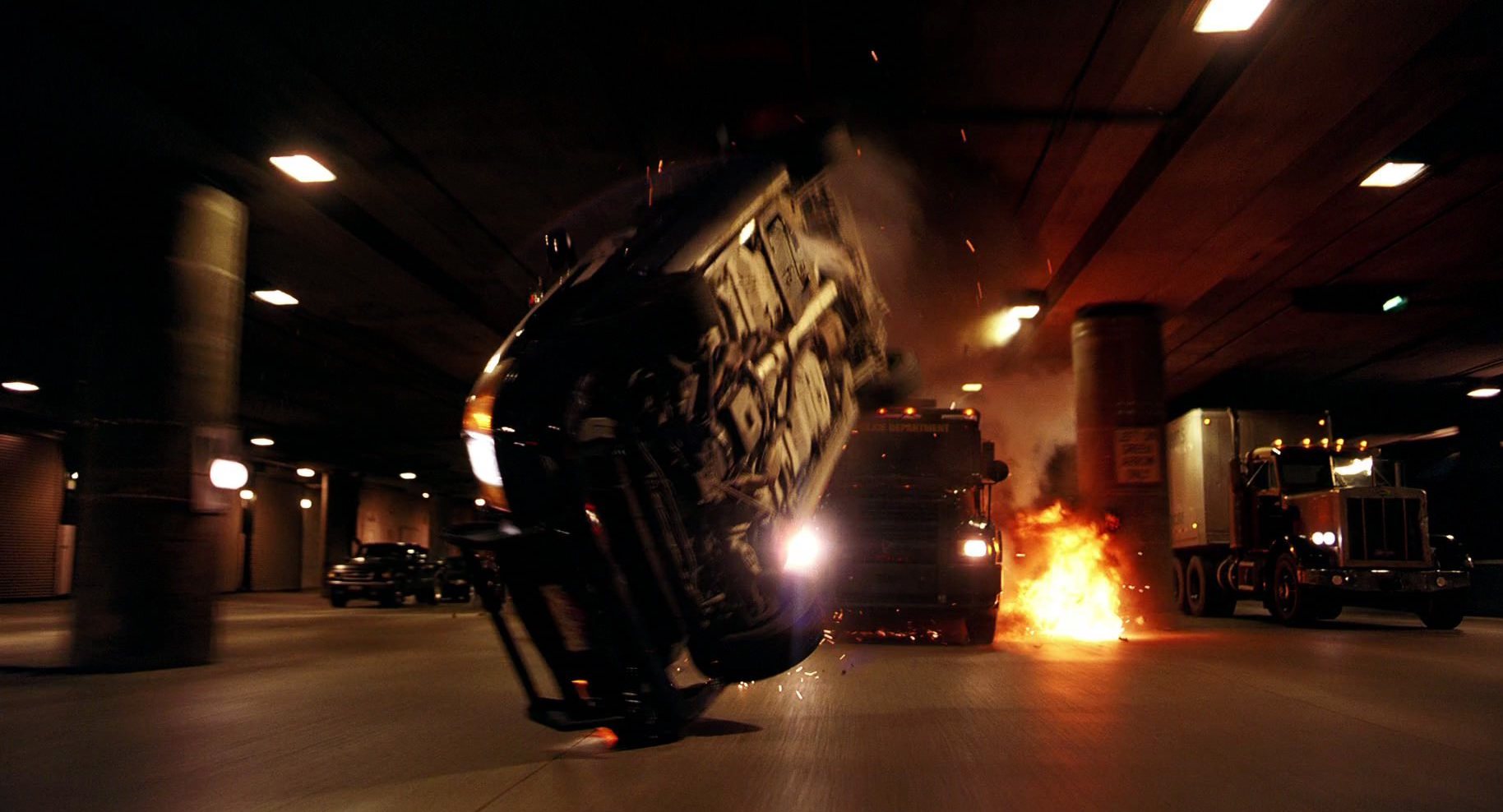 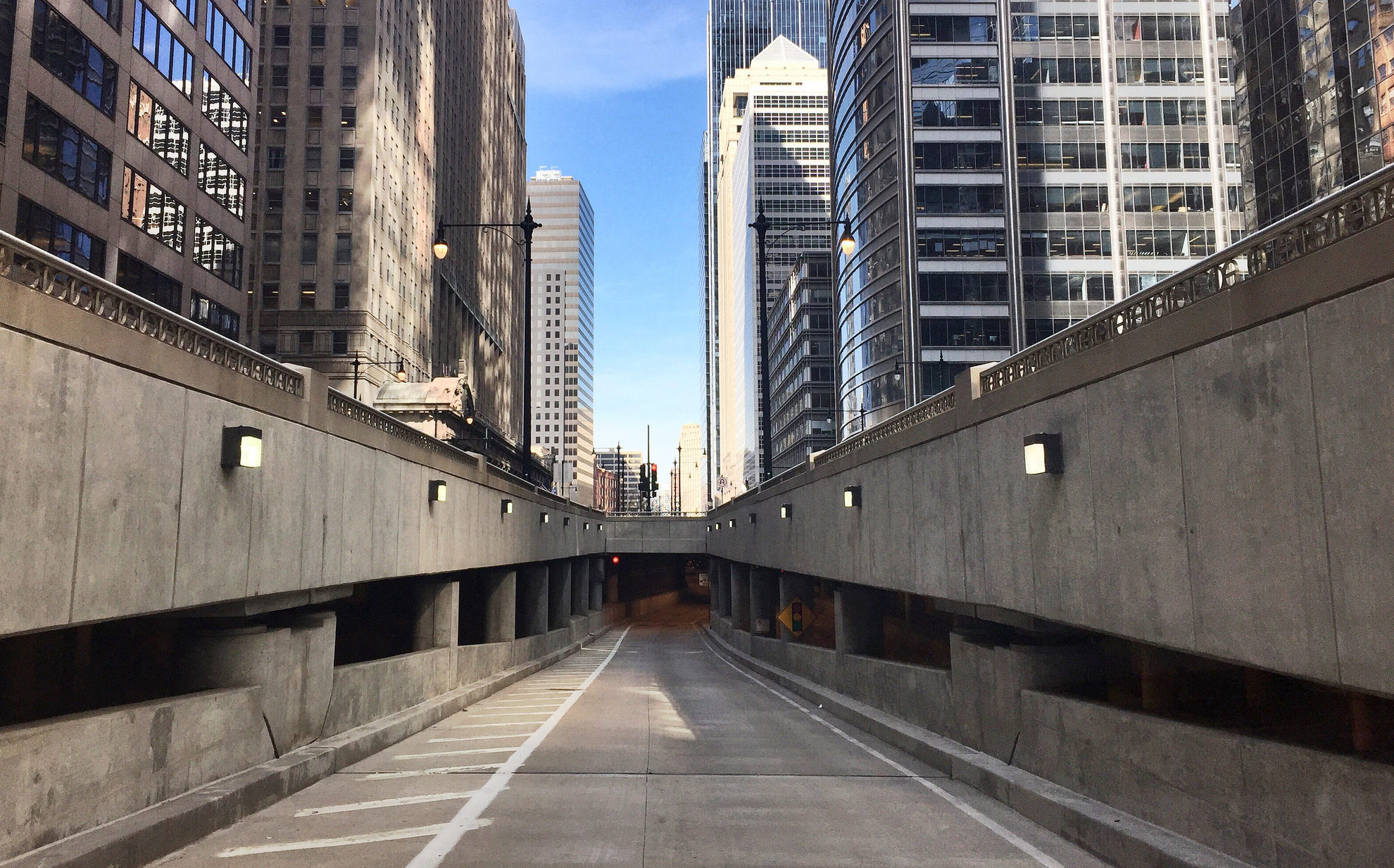 As such, it captures much of what makes The Dark Knight so effective. It’s a superhero film in which good clashes against evil on a grand scale like many others, but it also takes a place in a recognizably real city, one that’s home to millions and whose care and protection is a matter of life and death.

Batman Begins, like other Batman films before it, created a world of its own. The Dark Knight takes a different approach, stripping away much of the artifice, dragging Batman into a world more like the one we live in, and making that clash feel like it takes place unsettlingly close to home.

Keith Phipps is a writer and editor specializing in film, television, and other aspects of popular culture. He lives in Chicago with his wife and daughter and does not currently moonlight as a masked vigilante. Find him on Twitter @kphipps3000.

The Dark Knight at 10