Share All sharing options for: Frozen 2 debunks popular Disney fan theories that never made sense in the first place

Frozen 2 has already racked up a list of respectable achievements. The sequel had the biggest opening weekend for any animated film ever. (Well, depending on whether you count the “live action” Lion King as animated.) It has bestowed the parents of small children with a soundtrack that will get stuck in their heads. And, most importantly (to me, at least), it debunks one of the most virulent — and frankly, one of the dumbest — Disney fan theories out there.

Finally, finally, at long last, I can say with certainty that Tarzan is not secretly Elsa and Anna’s long-lost brother.

[Ed. note: This post contains major spoilers for Frozen 2, and also a lot of me being pedantic about Disney lore.]

Elsa still doesn’t have a girlfriend, but now she has a coming-out ballad
Read this

Back when Frozen came out, there were three big theories about how it connected to other Disney films. One was that Frozen and Tangled took place in the same world. This wasn’t particularly far-fetched, since Tangled protagonists Flynn Rider and Rapunzel make onscreen cameos in Frozen when Anna sings “For the First Time in Forever.” A common addition to that theory is that Elsa and Anna’s parents, Iduna and Agnarr, were heading to Flynn and Rapunzel’s wedding when their ship sank in a storm near the beginning of the film.

Another theory was that the ship Elsa and Anna’s parents died on was actually the ship at the beginning of The Little Mermaid. Both movies are based on Hans Christian Andersen stories, so okay, sure, fine, if that’s what you want.

The third was based on a quote by director Chris Buck, who also directed Disney’s 1999 animated Tarzan. Buck recounted a meeting where he told his co-director Jennifer Lee, “Of course Anna and Elsa’s parents didn’t die. Yes, there was a shipwreck, but they were at sea a little bit longer than we think they were because the mother was pregnant, and she gave birth on the boat, to a little boy. They get shipwrecked, and somehow they really washed way far away from the Scandinavian waters, and they end up in the jungle. They end up building a treehouse and a leopard kills them, so their baby boy is raised by gorillas.”

What he was saying is that Tarzan is Elsa and Anna’s little brother.

People ran with that idea, writing articles about the “CONNECTION!!!!!” between the two movies, making YouTube videos about the link, and heralding Buck’s statement as canon.

But the theory is objectively wrong. 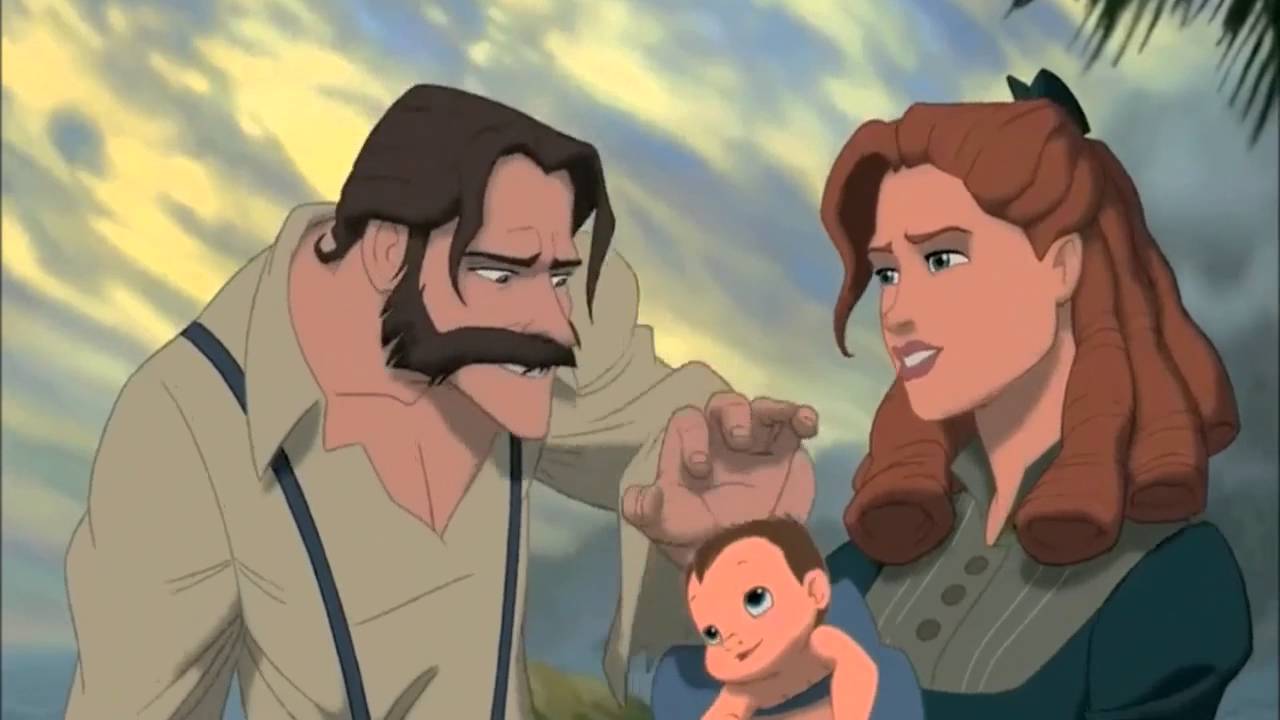 Do these LOOK like the same people to you:
Disney and Disney

First of all, Tarzan the movie shows Tarzan’s parents, who look absolutely nothing like Elsa and Anna’s parents. The dads both have facial hair, but that’s where the resemblance ends. That’s not even bringing up the fact that the costuming style sets Frozen around the 1830s, while Tarzan comes later. The source material — Edgar Rice Burroughs’ book Tarzan Of The Apes — was set in the 1910s. The Disney movie does move the time period a little earlier, since gorilla researcher Professor Porter refers to Queen Victoria, Charles Darwin, and Rudyard Kipling. The bustle on Jane’s dress suggests the story is set in the late 1800s.

But more importantly, Chris Buck wasn’t being serious when he laid out the connection. The full quote, which is rarely cited, ends with a tongue-in-cheek line about incorporating Buck’s 2007 Sony Animation film Surf’s Up into the same big meta-narrative headcanon. “So in my little head, Anna and Elsa’s brother is Tarzan — but on the other side of that island are surfing penguins, to tie in a non-Disney movie, Surf’s Up. That’s my fun little world,” Buck told MTV back in 2015. He did add an obligatory “fans can do whatever they want” line.

It’s one thing to create personal canon and delve into the “What if?” of established fictional worlds. That’s what fanfic is for. It’s an exercise in creativity and worldbuilding. You can say Anna and Elsa are actually Rapunzel’s cousins! Or write an AU where all the characters are mermaids! Or pair off Elsa with Jane Porter! The beauty of fanfiction is that your ideas can exist in parallel not only with canon, but also with the ideas of the rest of the fandom.

But when headcanons and Easter eggs start getting presented as unimpeachable facts, a director’s joke becomes a video thesis, and people who find out I’m a big Disney fan slide up with a “Well actually” to school me about the “truth,” it drains the joy out of imagining these connections and playing around with possibilities.

Thankfully, Frozen 2 did the best thing it could possibly do for my sanity: it debunked all three of these theories in one scene.

In the film’s second act, Elsa and Anna discover the wreckage of their parents’ ship — not in the Southern Sea, as they once assumed, but up in the north. The currents pushed the ship to the outskirts of the enchanted forest in the land of Northuldra, but the sisters soon discover that their parents died while trekking across the Dark Sea, seeking answers about Elsa’s ice powers. Using some newly discovered water magic, Elsa sees the moment right before their deaths as they clung to each other, the waves rising and eventually drowning them.

And under my breath, I muttered “Oh, thank goodness.”

The wrecked ship in Northuldra and the grim freeze-frame of Queen Iduna and King Agnarr about to drown clarifies three big things:

So I’m free. Free at last from the shackles of people trying to one-up my Disney trivia knowledge with these “facts.” Free from the burden of theories masquerading as canon, trying to distort the movie as it was written and intended.

Now, if you’ll excuse me, I’ll be over here crafting my modern Frozen AU fanfic, where Elsa and Anna open up an ice-cream shop in a small town to get away from their grandfather’s legacy as the CEO of a large corporation that exploited indigenous people and evaded taxes. Canon never bothered me anyway.

Next Up In Disney