The Mega SG is a Sega Genesis built to work with high-definition televisions, and the follow-up to last year’s excellent, Super Nintendo-focused Super NT. Like the Super NT, the Mega SG is a relatively affordable, FPGA-powered clone console from boutique manufacturer Analogue that aims to deliver the most accurate, simplest high-definition experience for your classic cartridges.

If you’re already familiar with the Super NT and want to know how the Mega SG stacks up, this can be a short review: The Mega SG is just as superb as the Super NT and, if you can live without 32X compatibility, is the ideal way to revisit your Sega cartridges — or CDs!

Why this $190 brand-new Genesis clone beats a dusty original Genesis is a bit more complicated.

First, a quick recap of the technology behind the Mega SG. Clone consoles traditionally use software emulation to replay classic games; the Genesis clone consoles available heretofore have a well-deserved reputation for having terrible emulation.

While a software-based emulator is fully capable of delivering an excellent experience — see Nintendo’s “Classic Edition” lineup, with software-based features like save states and instant rewind — Analogue’s solution is to instead emulate the hardware itself. Because rebuilding Genesis consoles by stockpiling 30-year-old Motorola 68000 CPUs and Yamaha YM2612 sound chips is unrealistic, Analogue’s consoles use a field-programmable gate array (FPGA) chip, which can, in simple terms, simulate the original hardware inside of a Sega Genesis. The creation of these so-called “cores” by Analogue’s own Kevin Horton is the company’s secret sauce.

That means the Mega SG should have full compatibility with the entire Sega Genesis library, including any glitches or slowdown that affected the original hardware. That also means it supports the Sega CD, both Model 1 and Model 2, via the expansion connector on the bottom of the console. The Mega SG comes with a spacer pad to lift the console up and align it with the connector. While this works incredibly well — Sega CD games look and sound perfect — it’s worth noting that the Mega SG looks, well, ridiculous attached to either model. See? 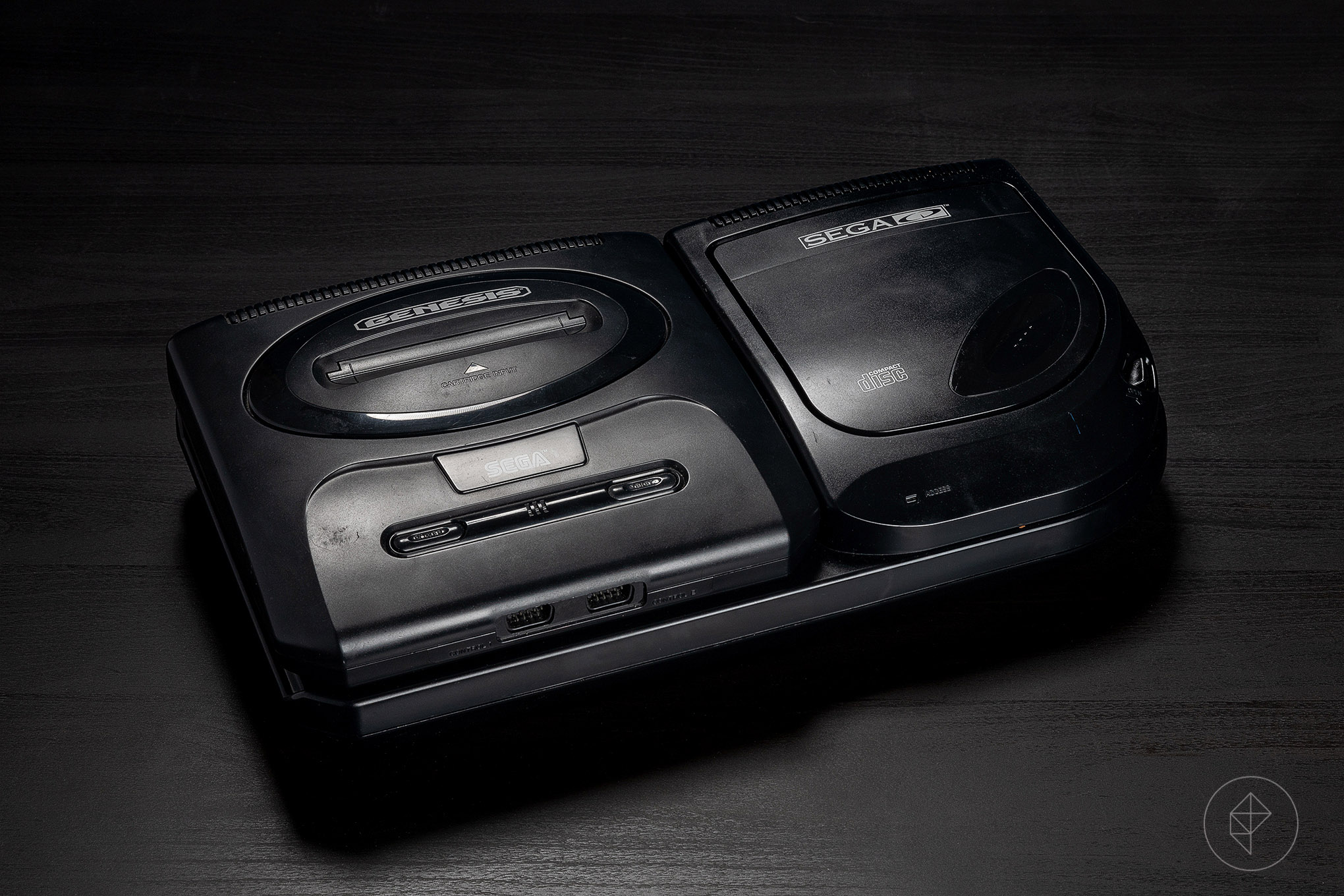 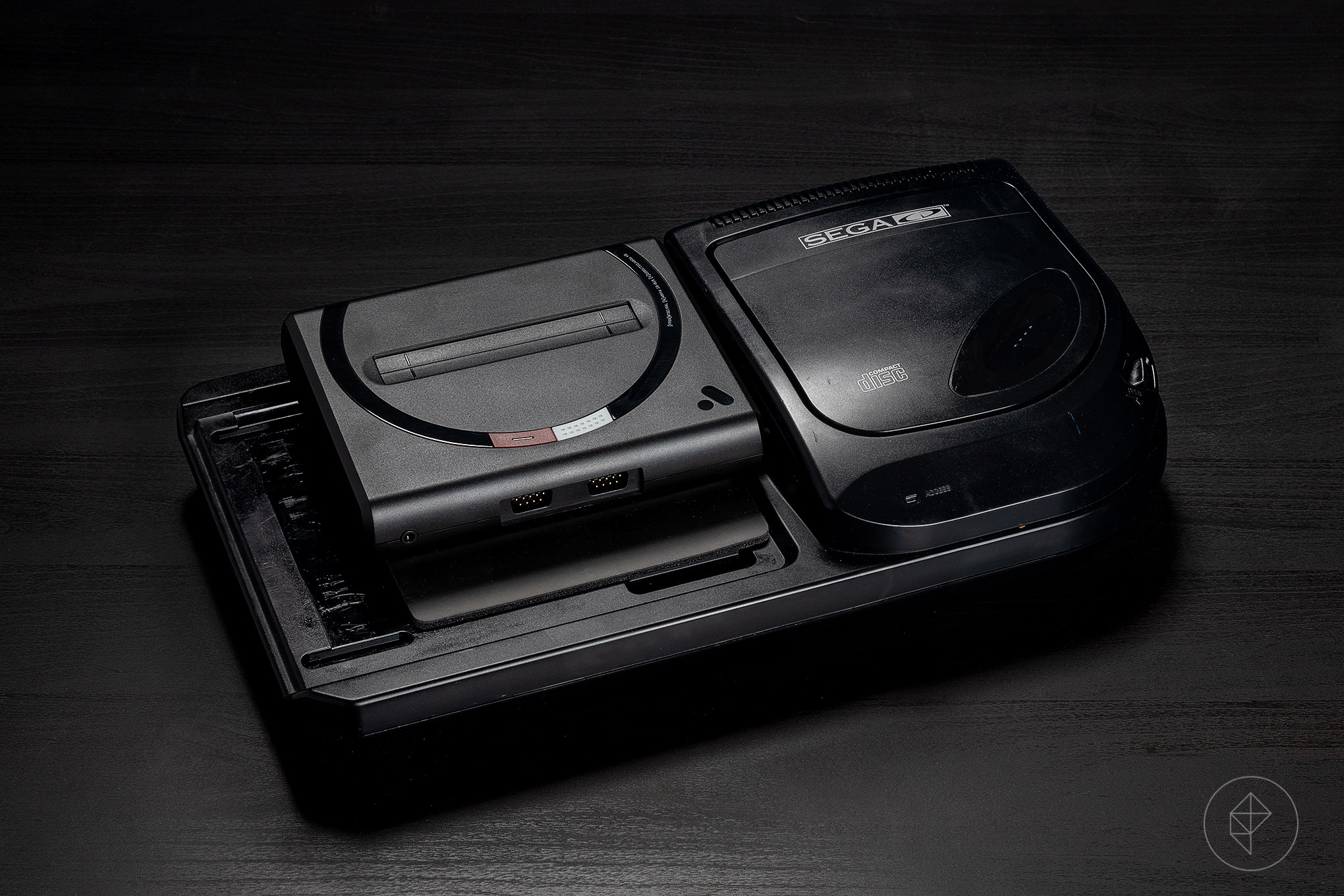 While the Mega SG works wonderfully on both the Model 1 and Model 1 Sega CD units ... it’s nevertheless goofy af

That said, the Mega SG looks incredible on its own. The plastic feels heavy and dense, and the contrasting finishes recall various stages of Sega’s own 16-bit industrial design. Cartridges slot tightly, with none of the wobble found in other clone consoles. Even the DB9 controller ports feel good. In fact, they feel more firm than the ports on both my Model 1 and Model 2 Genesis consoles. In short, the Mega SG feels like part of the family, just fancy.

Similar to the Sega CD support, the Mega SG supports playback of Sega Master System games, just like the original Genesis did. The so-called Power Base Converter was a simple pass-through device that remapped the Master System cartridge’s pins to work with the Genesis. Analogue includes a smaller, simpler version of that device in the box with every Mega SG.

It’s worth noting that while the Power Base Converter could remap both cartridges and cards, the Analogue-supplied adapter does not support the Sega Card format. Instead, Analogue says it will release a series of adapters for $10 each to support other Sega consoles like the Game Gear, SG-1000, and SC-3000.

One Genesis peripheral and cartridge format that will not work with the Mega SG is the 32X. Sega’s goofy, ill-fated 32-bit add-on connected to the Genesis cartridge port but also accepted an analog video signal from the Genesis, and then output its own video signal to the television. In the event that you’ve never examined the nest of wires necessary to connect a Sega CD, Genesis, and 32X, please visit this exhaustive resource and come back edified.

So while the 32X hardware won’t work with the Mega SG, there remains a chance that Analogue could simulate that hardware in FPGA as well, meaning a simple cartridge adapter would be all that’s required. But if you’re really intent on playing that 32X Star Wars Arcade cart on your 4K television, I’m afraid the Mega SG isn’t for you.

The Mega SG, like the Super NT, does not include any controllers, in an effort to keep costs down and customer preference up. Here are the various options available to you:

Ultimately, the Mega SG is about playing Genesis carts with a Genesis-alike controller on your HDTV. Yes, there are great Genesis emulators available for Raspberry Pi, and for someone uninterested in cartridge support and comfortable with the peculiarities and DIY nature of a Pi, that’s perhaps a better solution. The Mega SG is practically uncomplicated in comparison. I’m qualifying that statement because under the hood, if you’re eager to tinker, the Mega SG has a host of features waiting to be explored.

Most notably, a free game that comes bundled with every Mega SG. Like the Super NT’s inclusion of the unreleased director’s cut of Super Turrican, the Mega SG comes with an entirely unreleased game: Ultracore (formerly Hardcore). Developed by DICE, of Battlefield fame, and due for release in 1994, Ultracore was shelved because publisher Psygnosis feared the investment in releasing the title wouldn’t be rewarded against the pending PlayStation lineup. Instead, it languished in DICE’s offices until it was recovered years later, only to languish again until … well, now. The title will see wider release on PlayStation Vita and PlayStation 4 later this year, via Strictly Limited Games, but for now this piece of gaming history can be played on, essentially, original hardware. That’s wild. 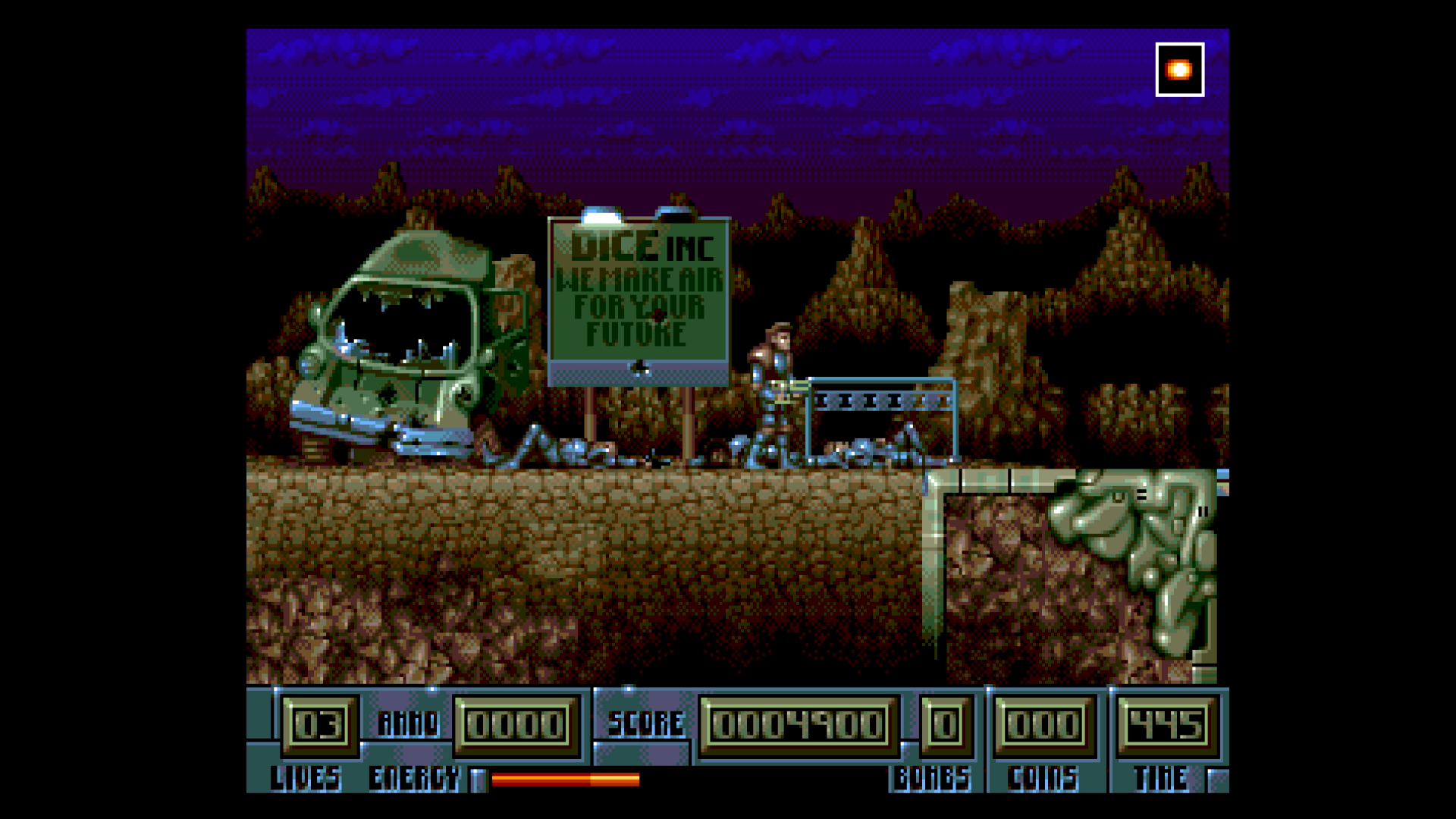 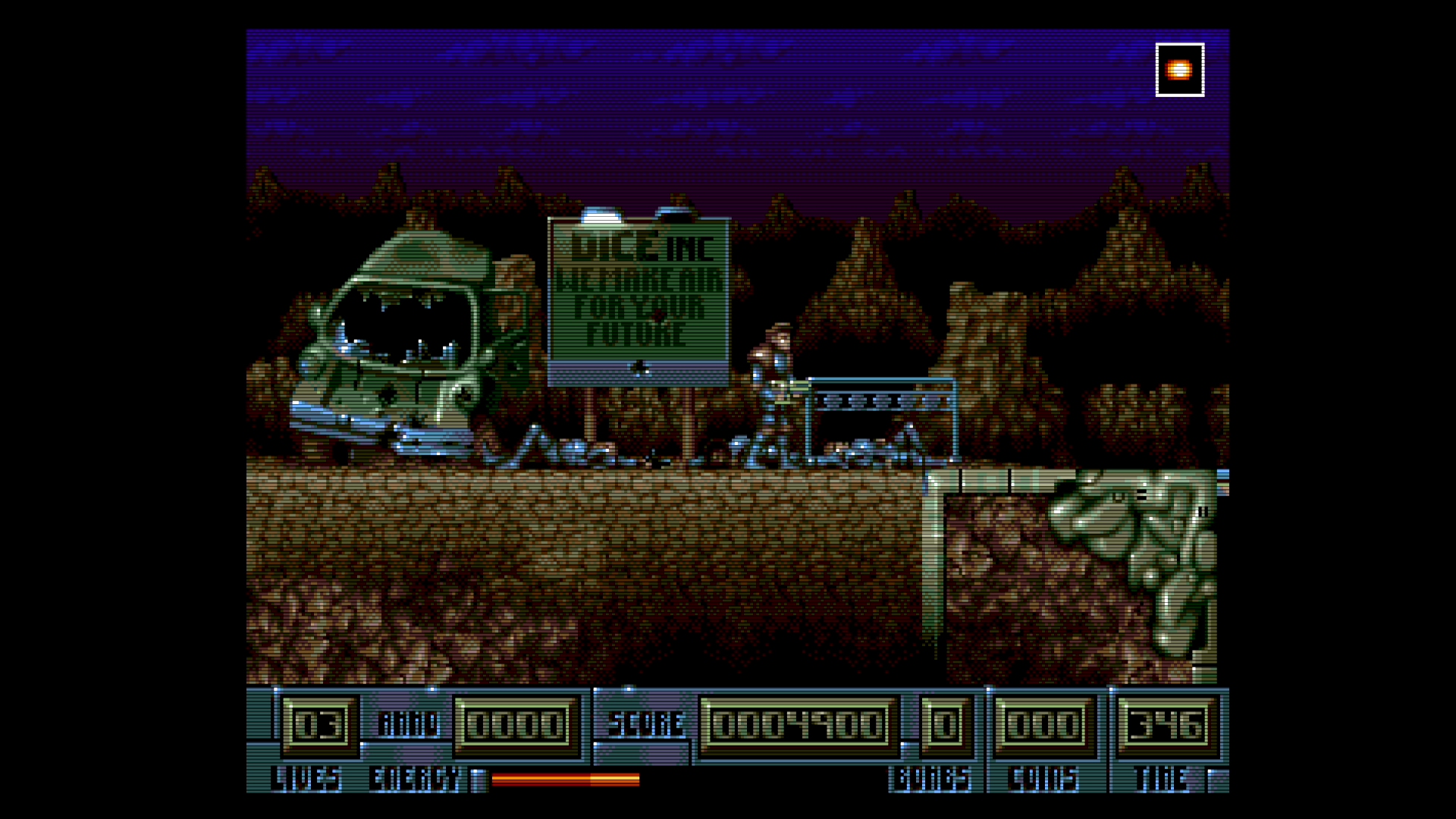 Ultracore, in 1080p with and without “hybrid” scanlines

Whether you’re running a game off the internal memory, like Ultracore, or a cart, a bevy of options are available to you. Perhaps most notable are scanlines, as pictured above. If you prefer your pixels sharp, scanlines can better simulate that classic CRT look. Analogue includes an option for “hybrid” scanlines, which help account for the differences between HD displays and CRTs. Even dialing in your scanlines can take time. Here’s the guidance:

Analogue suggests using hybrid scanlines at default depth with vertical interpolation enabled and make sure the vertical resolution is at an integer scaling (4x or 5x, not 4.5x which is default) or it wont duplicate identically to an original CRT :)

Other features include a ton of granular audio settings, the ability to boot directly to a cartridge, support for multiple regions, different region-specific menu icons, fonts, and more. It’s honestly a bit exhausting, but I’m happy to know the levers are all there in the event I want to pull them. Here are some screens from some Genesis all-stars, pulled straight from the Mega SG with default settings. (Click to enlarge).

Almost as notable as the unreleased game aspect is the expectation of a jailbroken firmware for the Mega SG. Both the Super NT and its predecessor, the NT mini, were treated to “unofficial” jailbroken firmwares shortly after release. While the NT mini jailbreak added support for a total of 18 consoles (!), the Super NT’s jailbreak was focused specifically on the Super Nintendo, adding support for playing ROMs from the SD card slot, and for dumping cartridges to SD card if you’d like to save your carts the wear and tear of use. Retro scene mainstay SmokeMonster has been distributing this unofficial firmware and, on the eve of the Mega SG release, when asked about a jailbreak, said simply, “No comment.”

Whether you have a giant (and valuable) collection of carts, the ethical tolerance to download a complete ROM pack, or the moral middle ground of only downloading ROMs for games you own in some other format, this feature set turns the Mega SG’s straightforward value proposition into something else entirely. The opportunity to rip my own carts to an SD card and peruse my personal gaming library without grabbing carts off the shelf? If these (*ahem*) mysterious jailbreakers somehow include the ability to rip my Sega CD games and spare my Mega SG the indignity of being mounted onto my always temperamental Sega CD Model 1, that would be worth the price of admission alone.

One final consideration of Analogue’s newer consoles that’s worth bringing up again for the purists: the absence of actual analog outputs. While the Mega SG features a charming headphone jack in the front, mirroring the actual Sega Genesis stereo headphone jack of old, that is the only digital-to-analog (DAC) converter on the unit. Analogue has promised a plug-and-play solution for the HDMI port that would export analog video and audio signals, and “some other extra special things” that it hasn’t announced yet, but until it’s here, it’s not.

Removing the analog components is one of the most significant ways Analogue reduced costs on the Super NT and Mega SG, but it also represents an ideal that, while almost certainly of narrow appeal, speaks to the company’s overall mission. This is about making the best, reference-quality retro game consoles, and if you can’t play ToeJam & Earl on a CRT, then what is even the point? (I’m kidding! Mostly!)

The idea that repeatedly crossed my mind while reviewing the Mega SG was simply this: I can’t believe this is a Genesis. I was a Sega Genesis kid growing up, and that console occupies a disproportionate amount of my gray matter even now, as an old person. But it’s clear we’re no longer living in a Sega-versus-Nintendo world; the cultural reckoning of that face-off has long since been decided.

Oddly, in this round of the Sega vs. Nintendo battle, Sega’s hardware has the edge in terms of commercial viability.

The Super NT was announced just one month after the Super NES Classic was released. Like the NES Classic before it, the SNES Classic excelled where other clone consoles had failed. Best-in-class software emulation, a charming miniature console, and the actual original controllers all combined to offer Super Nintendo fans an amazing opportunity. All of which is to say, the Super NT was introduced against stiff competition from Nintendo itself.

The Mega SG, on the other hand, has no such challenge. Sure, the vein of Sega Genesis nostalgia may not run as deep today as the Super Nintendo’s does, but it’s also served with far less frequency and quality. Like I wrote when the Mega SG was announced, this is the HD console that Genesis fans deserve. Maybe Sega will finally do right by its 16-bit legacy with its upcoming Sega Genesis Mini; announcing that it would no longer be made by AtGames, the clone console manufacturer behind the disappointing Genesis Flashback HD, is some comfort. But regardless of Sega’s execution, the Mega SG will almost certainly exist in a class of its own.

The Mega SG is a love letter to a console unaccustomed to such lavish attention. It’s a beautiful reimagining of Sega’s hardware, a tribute that Sega itself has failed to produce. It’s a considerate steward of the Sega Genesis’ legacy — analog headphone jack and all — and a pristine way to visit, and revisit, this chapter of gaming history. And for this Genesis kid, it’s a much-welcomed addition to the collection.

The Mega SG costs $189 and is shipping now. Our review console, and a 2.4 GHz M30 controller, were provided by Analogue. You can find additional information about Polygon’s ethics policy here. 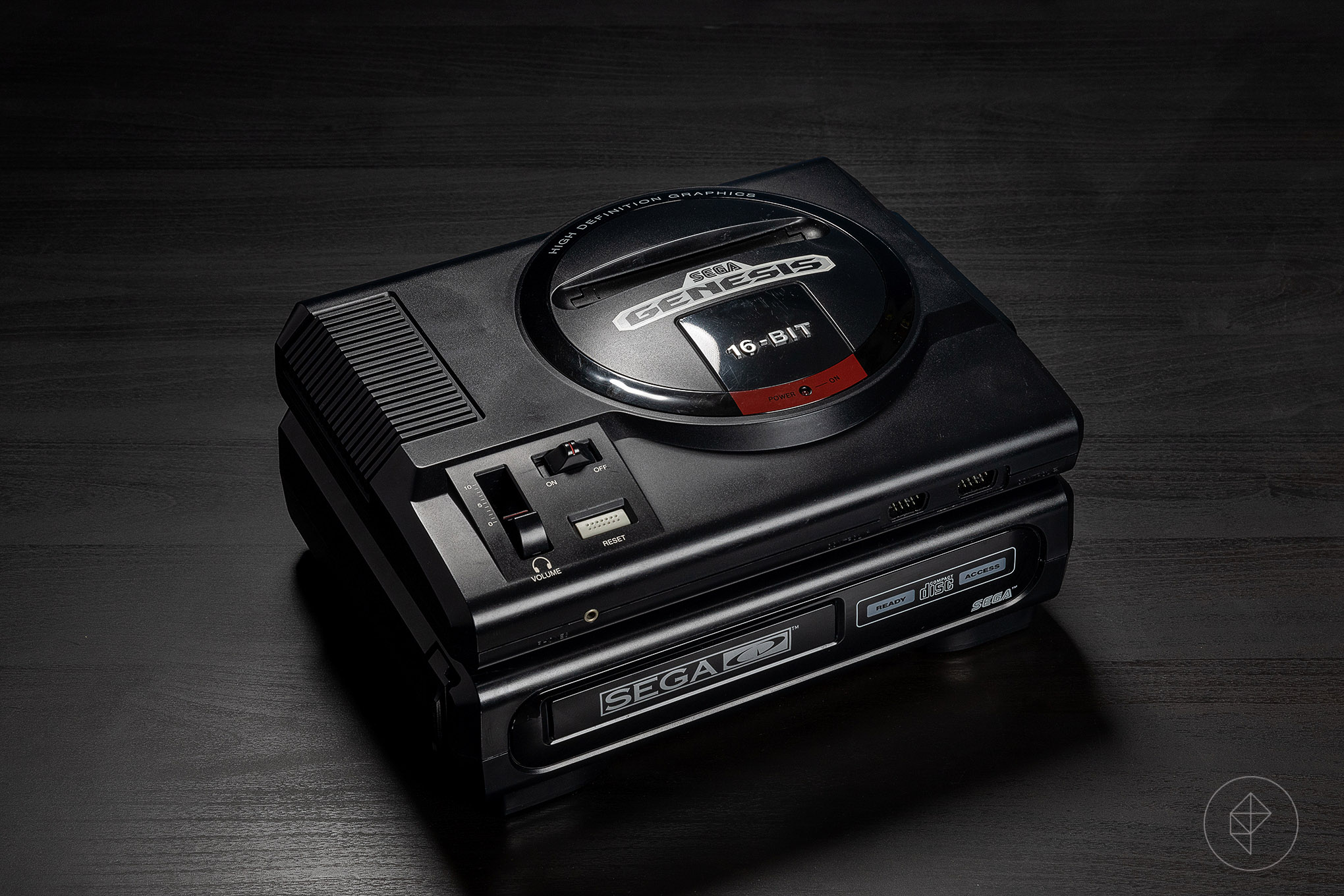 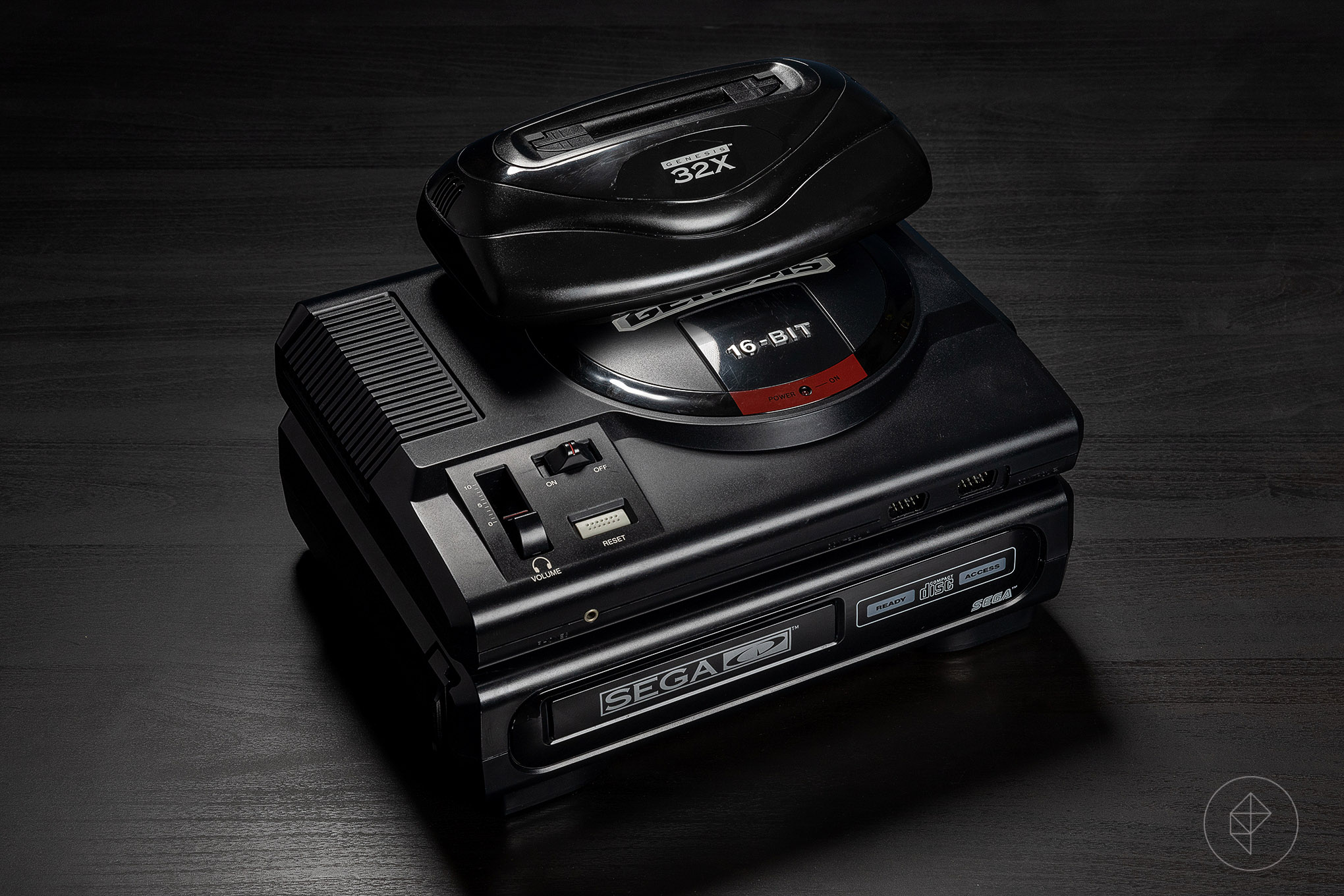