Trying to figure out what historical horses looked like

Share All sharing options for: A horse expert weighs in on the Assassin’s Creed pony debate (that we started)

When I booted up Assassin’s Creed Valhalla, I was greeted by a familiar face. Not a beloved Assassin, not even a Templar, but ... my horse.

Horses have long been a part of Assassin’s Creed, but this particular horse model has been with us since Assassin’s Creed Origins came out in 2017. It has a very compact body with sturdy legs, and it tends to carry its head high on a thin neck. It’s a horse that doesn’t appeal to me in a wildly romantic way, like the draft horses in Breath of the Wild, but it’s a perfectly serviceable steed.

But then I started to think. Origins, Odyssey, and now Assassin’s Creed Valhalla all use this horse model. The horses come in different colors, with different kinds of tack — but there are no distinct breeds, like there are in Red Dead Redemption 2, for example. Just this singular horse, appearing in Greece, Egypt, and now England and Norway, over the span of some 1,200 years.

These are regions with vastly different climates, terrains, cultures, technology ... the list goes on. I wasn’t sure what the horses should look like in each of these places and time periods, but I was pretty sure they wouldn’t be identical.

Now, I don’t think Ubisoft needs to rebuild the horse from the ground up every time it makes a new game. There are many more important things to prioritize, and I’m fully capable of suspending disbelief over horse models. However, I was curious: What did horses actually look like across these different historical eras?

I needed a horse historian.

I found a horse historian

Professor Donna Landry is a literary and cultural scholar. Her work has long focused on pastoral life in England, and her latest book, Noble Brutes, explores how Arabian horses changed not just English breeding practices, but the entire culture around horsemanship in the country.

Since its publication, she has conducted research on Ottoman horsemanship, and is preparing a publication about the role of horses at Waterloo. She was one of a group of scholars and riders who first reenacted the route traced by 17th-century writer and traveler Evliya Çelebi in his 10-volume Book of Travels. The 600-kilometer route is now called the Evliya Çelebi Way, and it curves inland from the İzmit Gulf, through the Turkish countryside to Simav. It’s also open for tourists — whenever we’re allowed to travel again, I suppose.

In short, Landry’s work is cool; she’s got legitimate horse skills; and, for some reason, she generously agreed to let me show her a PowerPoint presentation of Assassin’s Creed screenshots.

According to Professor Landry, indigenous horses from these games’ settings would look distinct from each other — but the horse in Assassin’s Creed Valhalla is not totally out of line for England in 873.

The Vikings weren’t the first people to invade England. The Saxons and the Romans were among the groups that came before, bringing horses from across Europe, Western Asia, and Northern Africa. So while native British horses and ponies tend to be small and hairy, there would have been some hundreds of years of cross-breeding by the time Eivor lands with their crew in the late ninth century. (Norwegian horses were also small and hairy, for what it’s worth — but the Vikings tended not to bring them on sea voyages.)

Professor Landry said that the Assassin’s Creed horse most resembles the modern Friesian, whose ancestors the Romans could have picked up as they swept north from Italy. Friesians are the bane of horse experts: The extremely striking breed is a go-to for the entertainment industry, regardless of historical accuracy.

Friesians appear in film and TV across borders and time. The Persians ride them in 300, and so does Jamie Fraser in Outlander. Bucephalus in Alexander is played by a Friesian horse, as is Toronado in The Legend of Zorro. Once you see this horse, you can’t unsee it.

“People have said that Friesians are good to work with, and they look spectacular,” Professor Landry said. “And because nobody in the audience knows anything anymore!”

The Assassin’s Creed horse might not be a literal Friesian — per Professor Landry, its gait resembles that of a Quarter Horse, and Ubisoft was unable to confirm to Polygon which breed the model was based on. But it does share notable characteristics with Friesians, like the high head and sharply sloped rump. Those traits, along with its stocky legs, make the Assassin’s Creed horse more consistent with horses from colder climates. 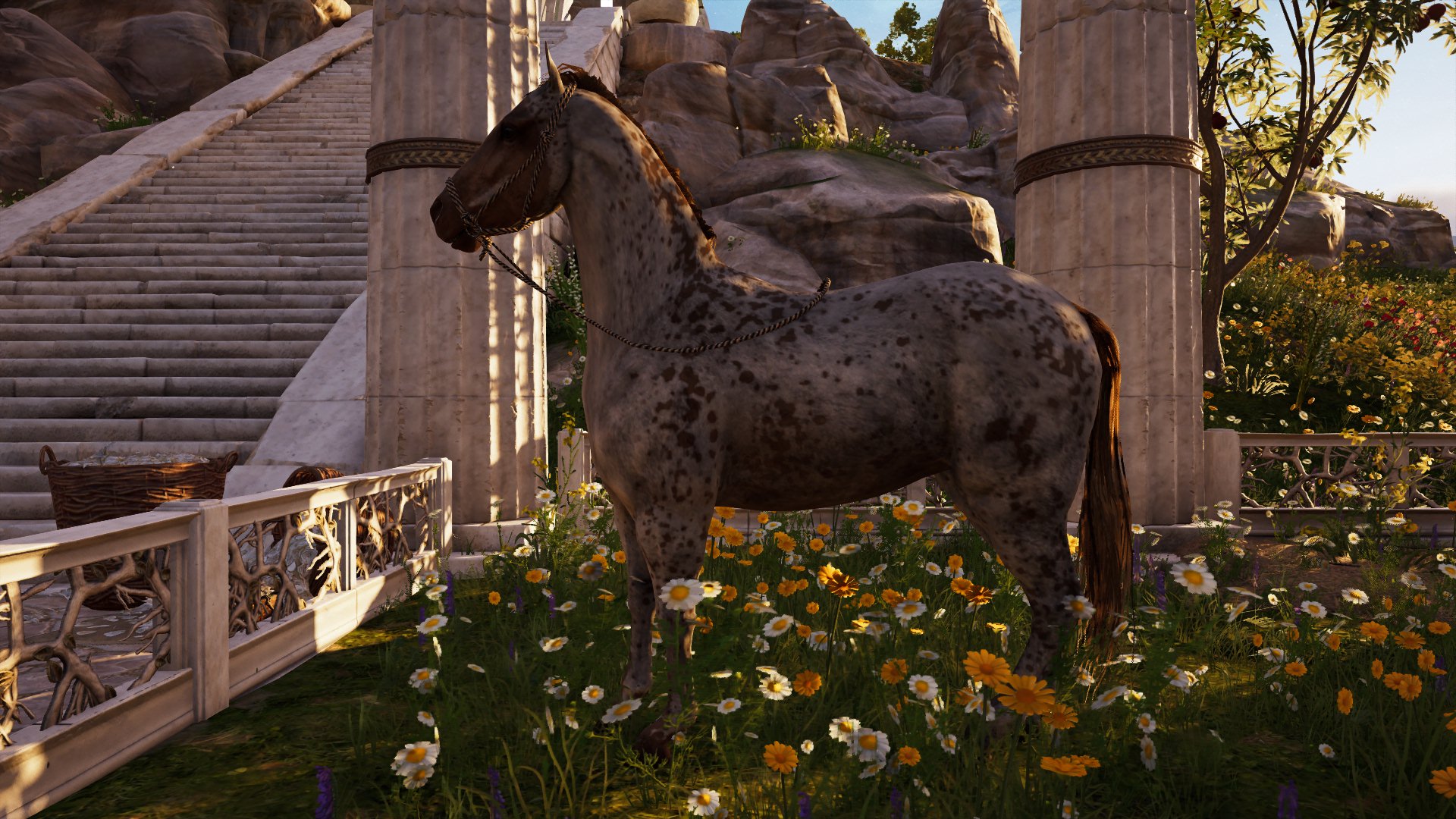 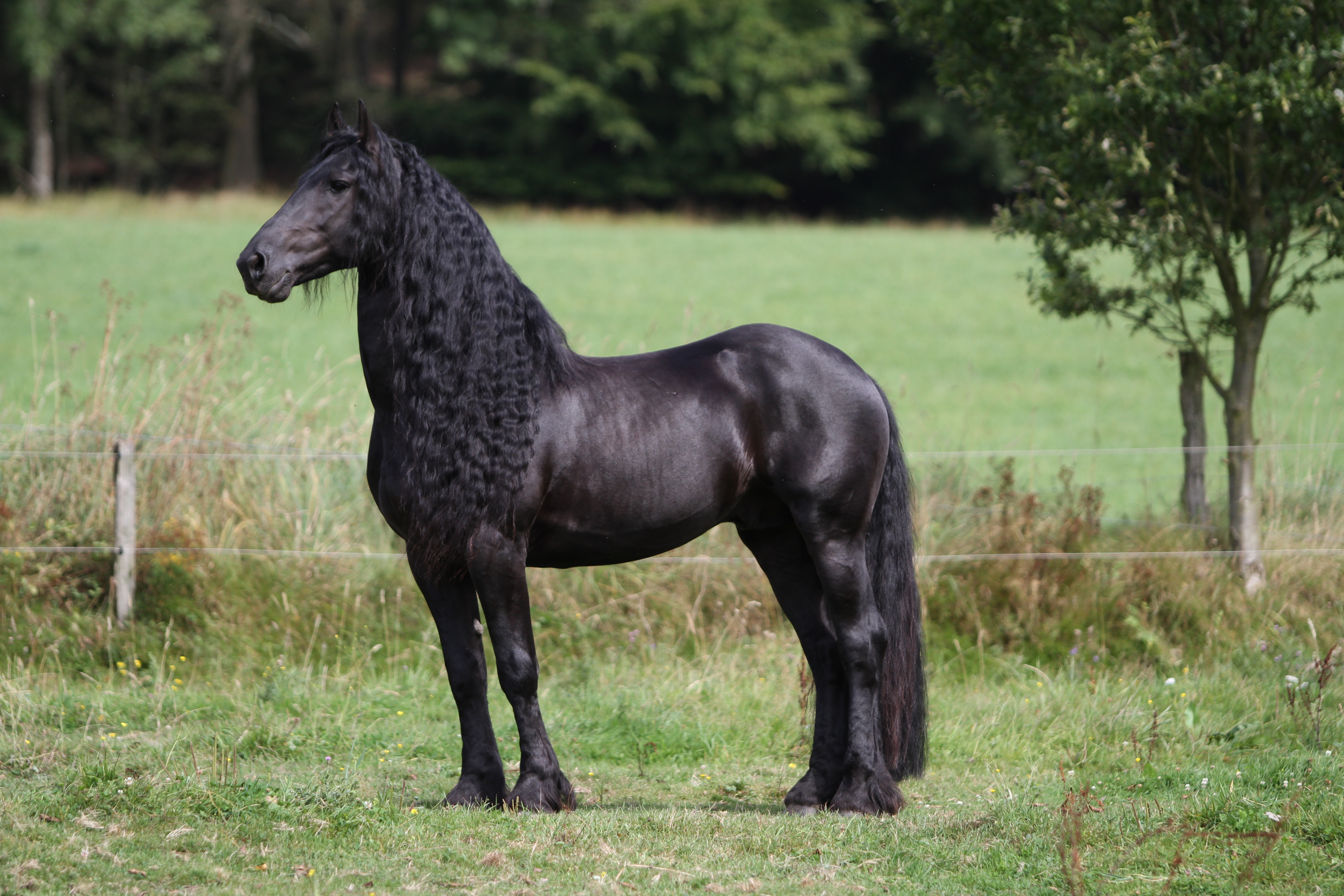 A horse in Assassin’s Creed Odyssey (left) and with a Friesian (right). Note the high head and the angle of the croup.
Image: Ubisoft Quebec/Ubisoft via Polygon and Photo: KimKuehke/Shutterstock

Horse breeds are divided into three types: hot-blooded, cold-blooded, and warm-blooded. This has nothing to do with the actual composition of the horse’s blood, but rather, the climate they come from. Cold-blooded horses, like the Friesians or Belgian Drafts, tend toward being heavier, and chill as hell. And the Icelandic horse and the Exmoor pony, both capable of incredible winter coats, are probably the best models we have for what Northern European horses would have looked like.

The Norwegian Fjord horse also fits this type — it’s a stocky draft horse that comes from western Norway, where Eivor hails from in Assassin’s Creed Valhalla. We know that Vikings bred Fjord horses for farming and for war, and that they were sometimes buried with them. We also know that the horse in Valhalla is absolutely not a Fjord. It lacks the thick-as-hell neck, the two-toned mane, and the dun color that’s characteristic to 90% of the breed.

“Any species from a hot climate tends to have long, slim limbs; longer ears; finer coats; and a different disposition vis-a-vis food and water, because of the relative scarcity,” Professor Landry told me. “And the farther you go into cold climates, you tend to have shorter, stockier legs; longer coats; and, you know, capacity for eating huge amounts.”

Which makes the horse in Assassin’s Creed increasingly anachronistic when we zoom back through time to ancient Egypt. “This Northern European type is just not relevant,” said Professor Landry. “Because horses tended not to flow that way.” 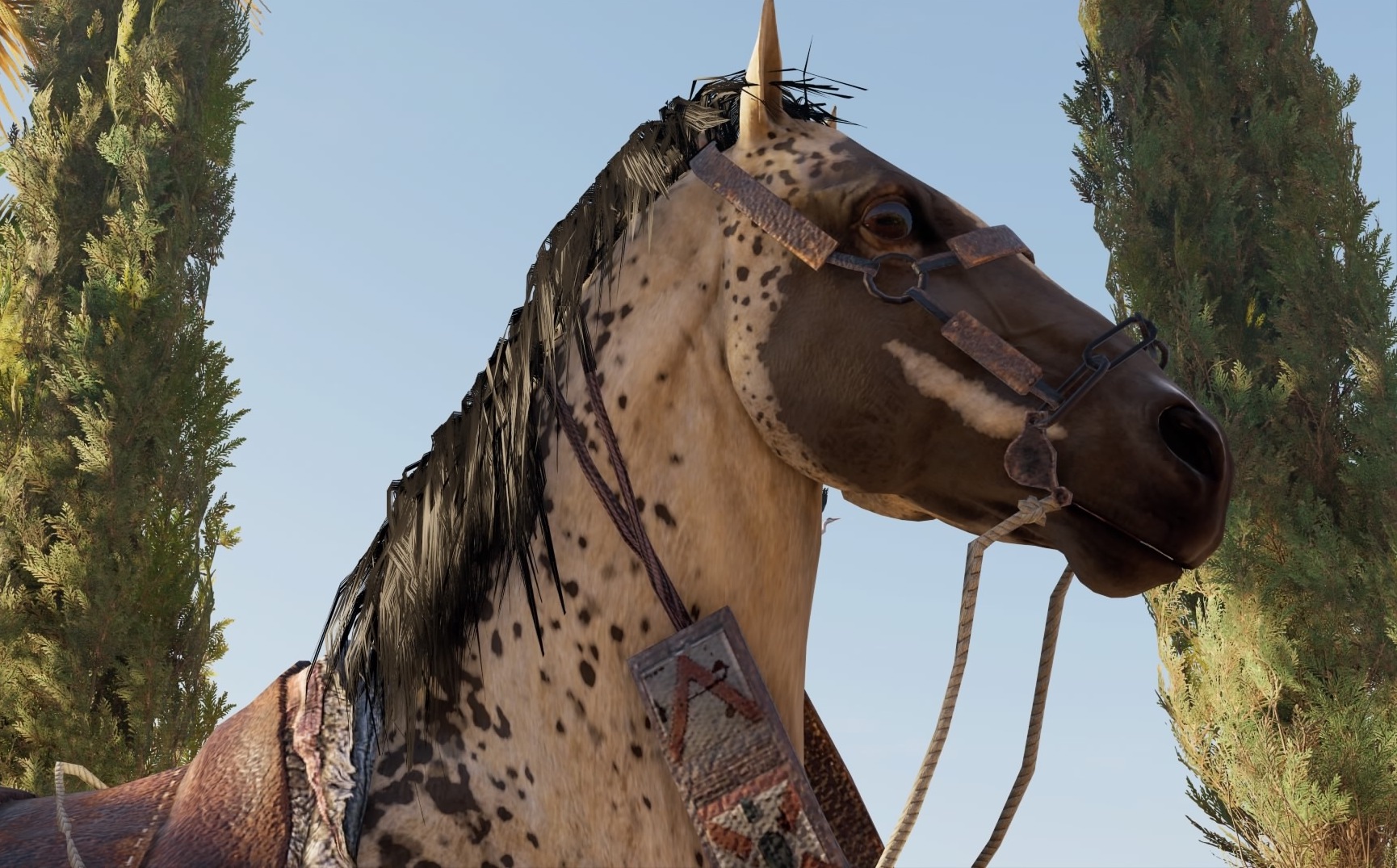 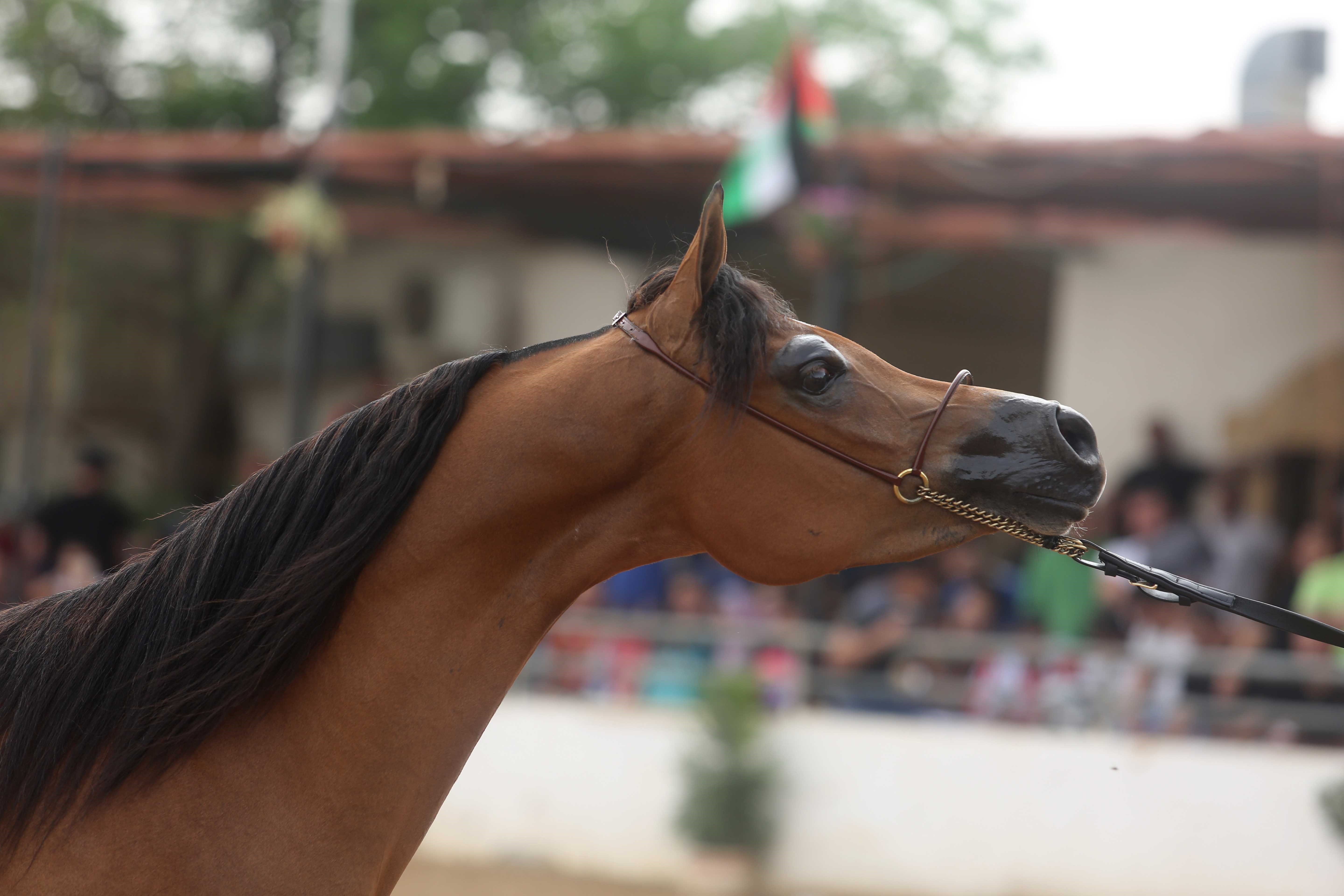 The horse in Assassin’s Creed Origins (left) and an Arabian horse (right). The Arabian’s neck is arched, and it has the dished face typical of the breed.
Image: Ubisoft Montreal/Ubisoft via Polygon and Photo: Issam Rimawi/Anadolu Agency/Getty Images

Egyptian art depicts horses that have high tails, extremely arched necks, and dished noses — all traits that are still present today in Arabian horses. Of the appearance of the horse in Assassin’s Creed Origins, Professor Landry said: “Oh no.”

The horse of ancient Egypt was “a much finer, fleeter, more elegant horse,” Professor Landry continued, adding that this is something “we know from all kinds of archaeological evidence.”

We also have a good idea of what Greek horses would have looked like, even as far back as Assassin’s Creed Odyssey, which takes place over 2,000 years ago. Professor Landry pointed to Xenophon, a philosopher and cavalry commander who wrote On Horsemanship and Hipparchicus, which are two treatises on ... well, horsemanship. Xenophon described the ideal Greek warhorse in detail.

Xenophon’s cavalry horses are compact, short-legged stallions with curved necks and wide hindquarters. “This continues to be a desirable shape in the cavalry, including the British cavalry,” Professor Landry told me. “In the 19th century, people are still talking about the beau ideal for a cavalry horse is having a bottom like a barmaid.” Horses: We like them thicc.

Assassin’s Creed Odyssey fares a little better on horse accuracy than Origins, then. This horse has short legs, and is what I would describe as “chunky.” However, Xenophon also wrote that “the head should be bony and the jawbone small,” while the horse’s withers, or front shoulders, should be high.

“High withers offer the rider a safer seat and a stronger grip on the shoulder,” said Professor Landry. “So you want high withers, but you want to be sitting down and on this broad back.”

Having a good seat was important because, as it turns out, saddles hadn’t been invented yet. Hence the ideal cavalry horse being nice and wide, without a protruding spine. Because, ow.

The history of horses is also the history of human culture. It was the northward flow of Arabian, Turkish, and Barb horses to England that eventually contributed to changing the way the English thought about animal welfare.

In the 17th century, horses were, shall we say, not treated great in England. “There was a lot of casual brutality,” Professor Landry told me. “These Eastern horses in particular were not at all accustomed to this, and they wouldn’t tolerate it at all.”

The desert horses, such as the Arabian, look strikingly delicate compared to English breeds, and unlike English horses, they weren’t desensitized to violence. Among the Bedouin, Arabian horses were treated with respect, and foals were raised alongside humans. And so English horse owners who took in Arabians, and other Eastern breeds, began to see horses as sensitive, and sentient — which, of course, they had been all along. Later books, like Anna Sewell’s Black Beauty in 1877, reinforced messages of animal welfare.

Assassin’s Creed grapples with the history of religion, warfare, and architecture. So far, horses in Assassin’s Creed serve as vehicles more often than they do sentient creatures — though a gut-wrenching scene in the opening of Valhalla leans into the latter. But there’s a rich history of how animals have shaped, and been shaped in turn, by our interactions with them, and it’s a story worth exploring.