For Breyer, the making of a hyper-realistic horse toy is art

A look behind-the-scenes at the sketches, the sculpting, and the molding of these classic models

Share All sharing options for: For Breyer, the making of a hyper-realistic horse toy is art

The Horse Girl Canon is Polygon's celebration and exploration of the books, films, TV, toys, and games that have become essential to the cross-generational "Horse Girl" life.

Times change, but horses don’t. Which is why, over the last 70 years, the equine toy company Breyer has crafted horse models with a consistent, artful, muscular philosophy.

As a Horse Girl born in the ’90s, I have fond memories of drifting to the back of the toy store, where Breyer horses were stacked up to the ceiling. The horses captured my imagination: they were pristine and sculpted in dynamic poses. I could find Breyer models of the horses I loved from books, like Misty and Man O’War.

But at the time, I could have never fathomed how many steps it took to make a hyper-realistic Breyer horse. In researching the Horse Girl Canon, we discovered the answer was: many. Speaking to Polygon, Stephanie Macejko, Breyer’s vice president of marketing and product development, walked us through the delicate process of making a Breyer horse — from sketch to sculpture to the final product.

Breyer was founded as a molding company in 1950, and produced everything from TV knobs for Zenith television sets to special items fulfilling government contracts. The first Breyer horse was commissioned as an ornament for a mantlepiece clock that same year. The company eventually teamed with Woolworths for the first line of horse toys. As we would all love to do, Breyer pivoted to horses.

With every model, Breyer looks to capture not just a likeness of their horse subjects, but also their personalities and pasts.

“We’ll do horses that have a great story. We’ve done everything from Olympic-level horses, to Triple Crown winners,” Macejko said. “But we’ve also honored horses that were just great lesson ponies, the types of horses that for 30 years are giving kids their first experience riding horseback.”

Once a horse is chosen, a freelance artist takes on the project and begins sketching. Each artist has their speciality, be it heavy draft horses or racetrack Thoroughbreds.

“Some [artists] love to work out in the field, bring their clay go to the barn or wherever the horse is located, and they like to sit there and observe the horse from real life,” Macejko told me. “Other artists I find are distracted by everything going on at the barn.”

Horses can be difficult to draw or sculpt (even if our favorite cartoonist, Lisa Hanawalt, disagrees). Breyer horses in particular have pronounced, realistic muscle structure and dynamic poses.

“I’ve seen a horse almost complete, and the artist mash it back up and say ‘no, that’s not it. I’m going to start over again,’” said Macejko.

There’s a dedicated community of people who buy and then customize their own Breyer horses. Breyer has ended up hiring some of them. And then there are artists with more colorful backgrounds.

“[Breyer horse artist] Kathleen Moody, crazy enough, she [...] at one point in her life was a taxidermist,” said Macejko. Moody is an award-winning artist who has made many Breyer models, including the legendary Arabian Huckleberry Bey.

“It wasn’t just the face, but it was sort of the whole body expression [of Huckleberry Bey] that seemed to draw people in,” said Macejko. “That particular horse just had such a dynamic personality also, that was really captured so well in the sculpture.”

Over the last decade, some Breyer artists began sculpting digitally instead of in clay. Whether clay or digital, the next step is always a resin cast.

Breyer produces prototype models which are painted in acrylics — not the airbrushed paints used for the final product. While the final product will be molded in translucent white material, these prototypes don’t have any white markings painted on. A five-person studio then plans out, based on the prototype, how the production paint will be applied. 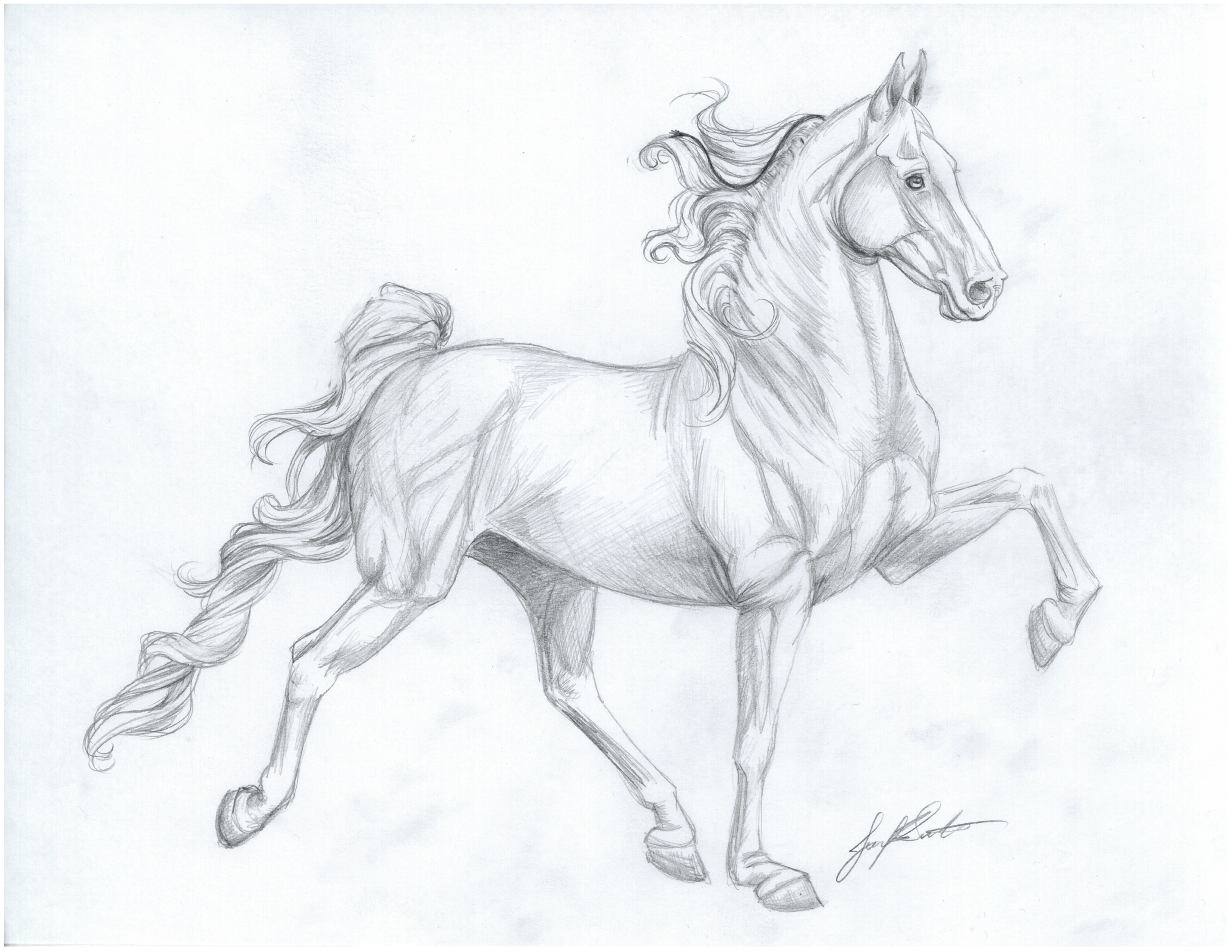 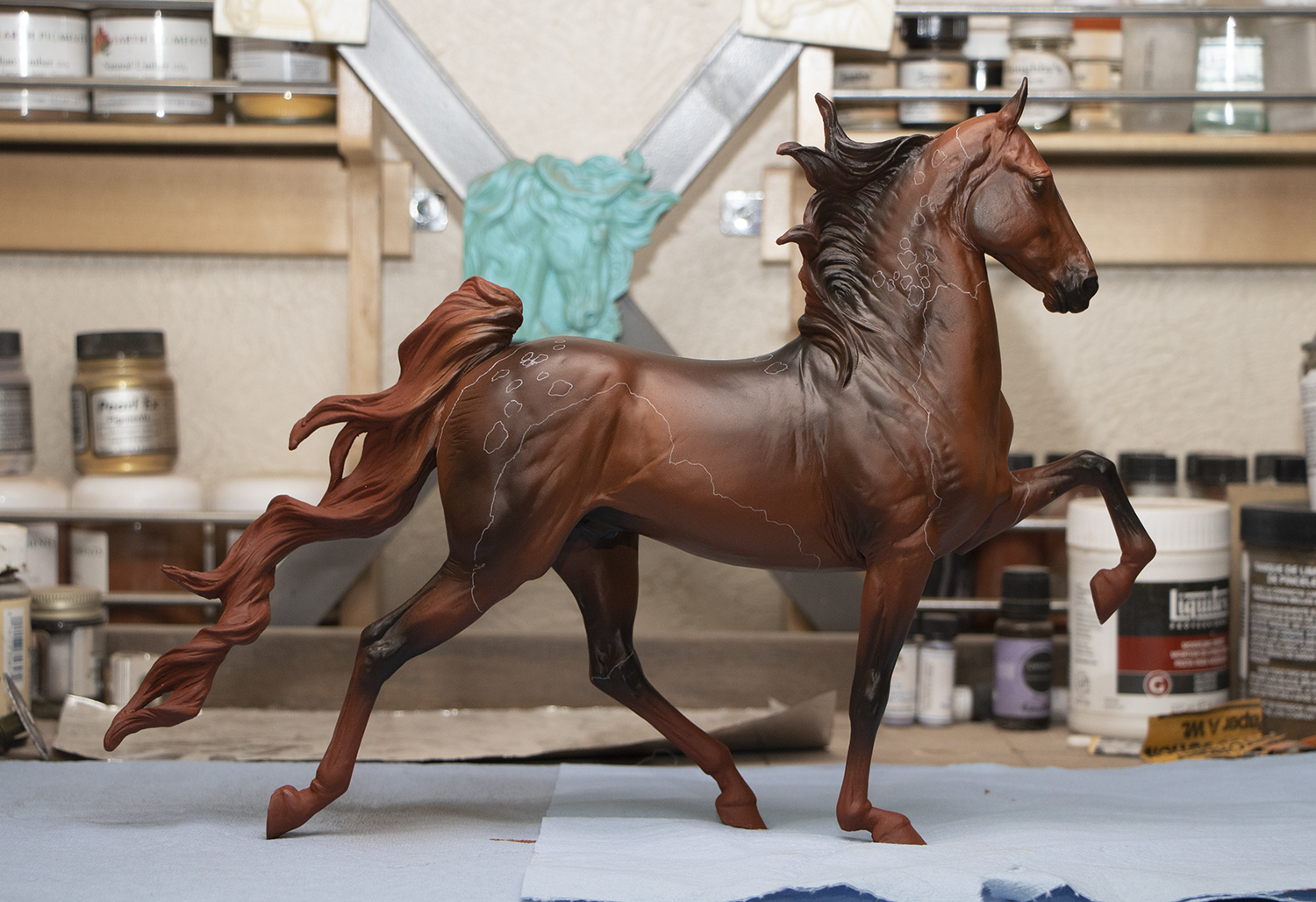 At this point, engineers begin making the casting tool which will produce the final models.

“Our injection-molded tools weigh about 2000 pounds — as much as a draft horse,” Macejko told me. “[The tool] basically consists of both the concave and convex parts that are going to mold the horse itself.”

It takes about three months for a tool to be created. Because Breyer horses have such detailed muscle structure, undercuts that create dimension, and fiddly bits like manes and tails, the tool is built with a series of cams and lifters that allow the model to pop out of the mold without any injury. The process, Macejko admits, is an expense, and one that keeps the models at a price point.

The mold material, either cellulose acetate or ABS, is heated to 300 degrees Fahrenheit and injected into the tool. After 60 seconds, the horses are removed to cooling racks. The models come out of the tool in two pieces that need to be bonded together.

“Usually there’s an excess bead of plastic along the seam, which we call flash, and the flash has to be removed,” said Macejko. “We use buffing and scraping tools as well as an acetone wash with a cloth to get the surface of every model completely clean and prep for painting.”

All Breyer horses are airbrushed by hand, and multiple artists handle each horse. Artists will lay down a base color with larger airbrushes, and then pass the horse off to another artist for the detail work

Each horse has its own quirks. Dappled horses require their own special technique.

“Some of them use what we call a resist technique, where you splatter on a material onto the horse, then you spray the gray, and then you have to wash off that resist material, and that creates a certain dappled effect,” Macejko told me. “The other dappling that we do is actually done by hand, which is literally someone with a very fine airbrush and a very soft touch, painting every dappled horse.”

Dappling isn’t the only complex color pattern. Dun horses require a hand-painted dorsal stripe, and sometimes a delicate tiger-stripe pattern on their legs.

The white markings on paint horses, pintos, and appaloosas are masked out to preserve the translucent white plastic of the model, while the other pigments are painted on.

“[Our artists] need to have a subtle hand,” said Macejko. “And that is really difficult to teach.”

The final touch is the gloss in the horse’s eyes. “And then it’s put into whatever its package is, which is also designed to tell the story of that particular horse,” Macejko told me. “So whether it’s about the breed or if it’s a real horse, that also gives everybody a sense of what made this horse important and why it’s part of the Breyer line.”

The entire process, from sketch to packaging, will see each model horse passed through 20 different artists and technicians. This is how it’s been done since the ’50s, and Macejko thinks that’s what keeps the toyline classic, but fresh.

“A thing that has remained the same is the fact that there is this attention to detail and quality, not just in material, but in the actual sculpted horses themselves. There is an integrity there,” she said of the company’s legacy. “When we we looked at the sculptures, we said, well, but is that Breyer? There are a lot of different things that are more fanciful and stylized, but there’s a certain underlying integrity that we say is Breyer. Does it have at least the right kind of proportion? And is it inviting and fun? I think that’s been consistent.”