Share All sharing options for: WandaVision’s ‘wiggly-woo’ magic was designed to fit the MCU’s past and future

[Ed. note: this interview feature reveals significant plot points from WandaVision. Quotes have been edited for concision and clarity.]

When Agatha Harkness revealed herself to be a witch powerful enough to battle reality-rewriting superhero Wanda Maximoff, most WandaVision fans probably weren’t wondering why Agatha’s magic effects were a rich, dark purple. But it turns out a lot of thought went into that question — and how the look of WandaVision would fit into the larger Marvel Cinematic Universe. VFX supervisor Ralph Maiers tells Polygon that designing those effects was a complicated but enjoyable process that took significant coordination with other effects houses and with Marvel Studios.

“We had a lot of cross-pollination back and forth with [the show’s visual effects supervisor Tara DeMarco],” he says. “We were bouncing ideas around like we were back in art school. You know, like, ‘Hey, what did you think of—?’ ‘Well, maybe we do this?’ or ‘This was kind of cool, but what if instead—’ It was really fun, which is not necessarily always what happens in this business.” 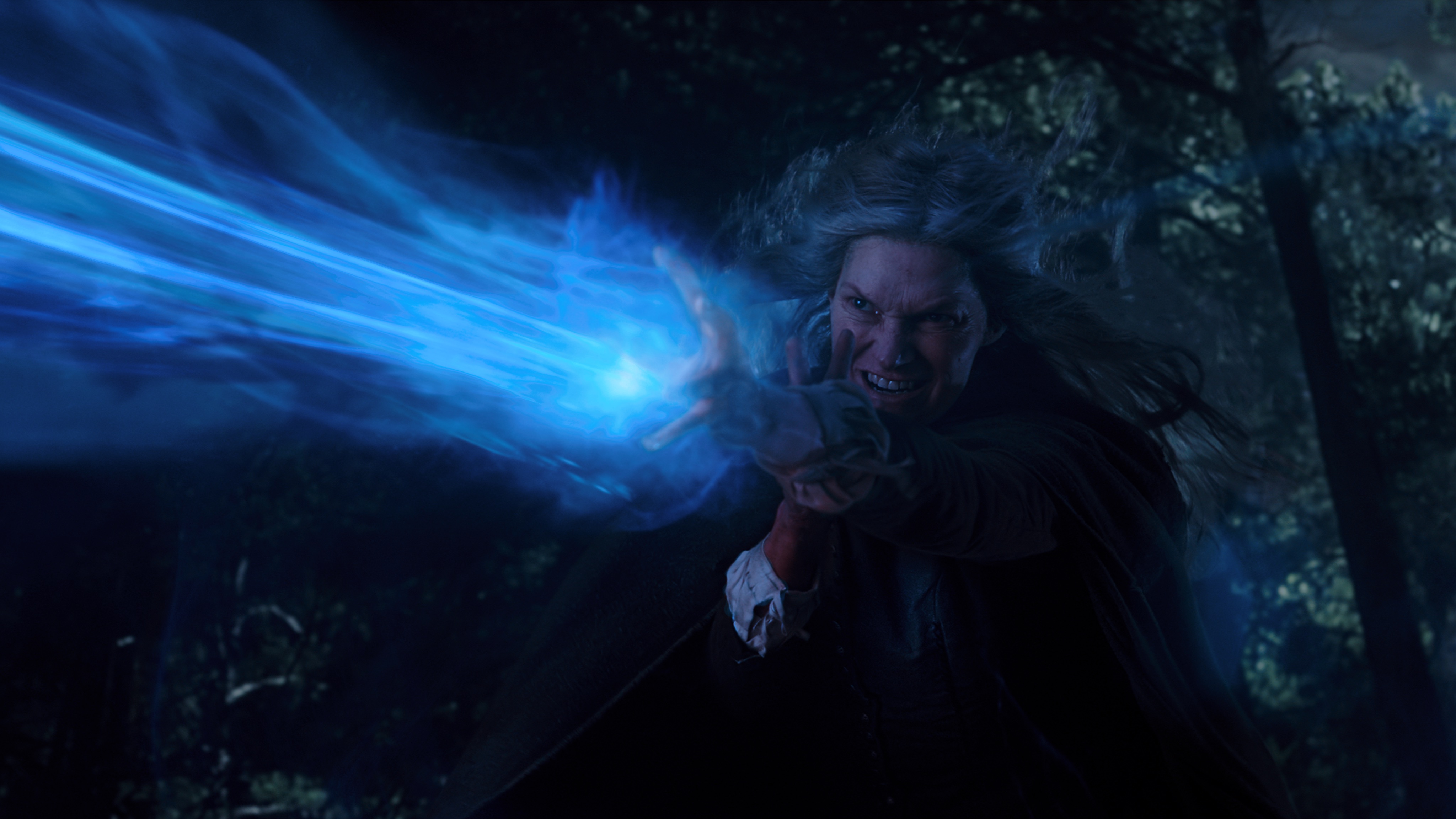 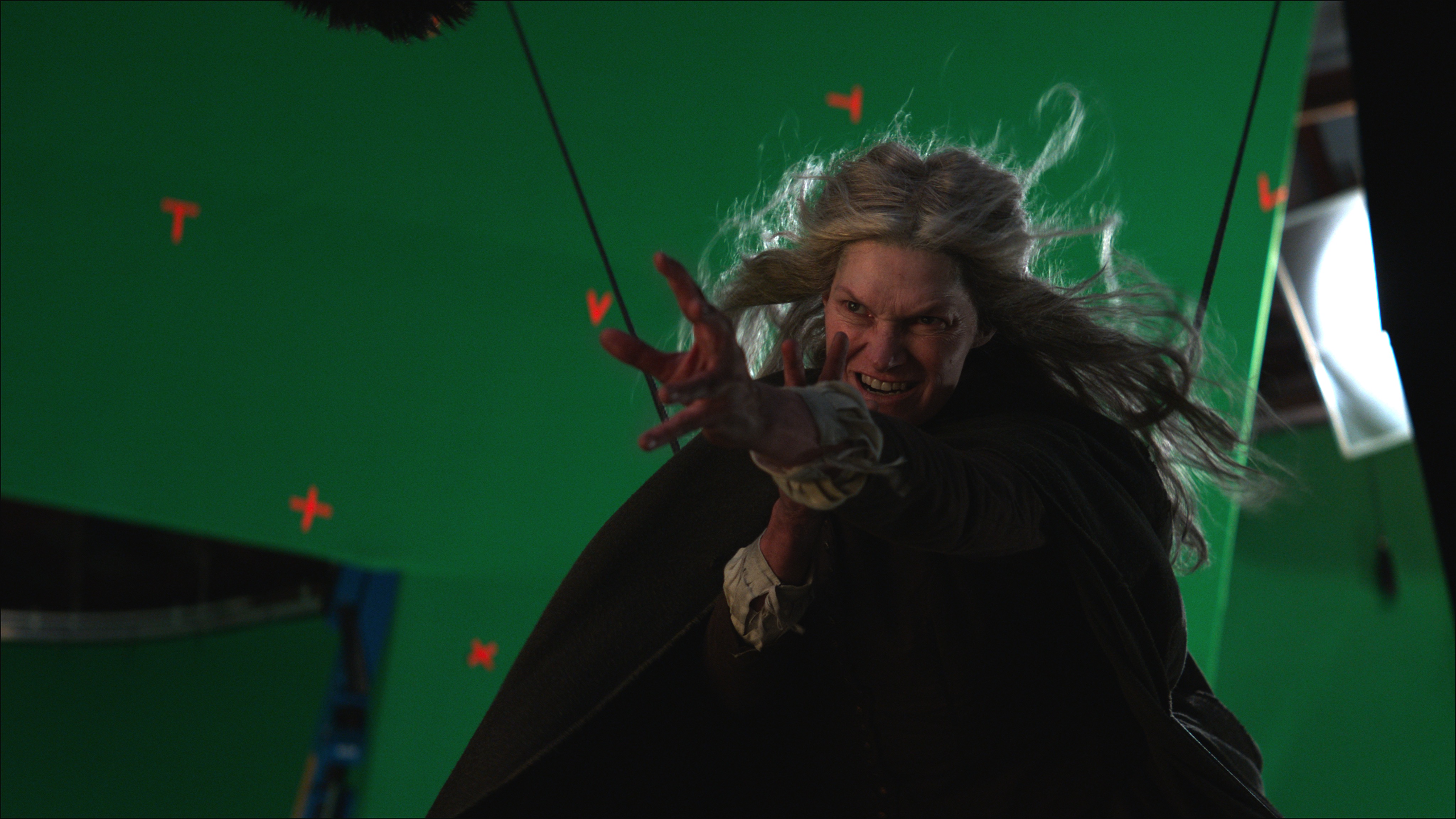 Before and after shots from MR. X’s witch sequence in WandaVision

Maiers works for MR. X, a digital effects house with branches in Los Angeles, Toronto, Montreal, Bangalore, and Australia. The company has done extensive work in TV and film. Its recent projects include The Boys, Monster Hunter, Vikings, American Gods, Da 5 Bloods, Enola Holmes, The Old Guard, Raised By Wolves, and many more. Past projects range from The Shape of Water to The Twilight Saga — Breaking Dawn Part 1 to Fast & Furious. But WandaVision is the company’s first MCU project, which meant not only fitting its effects into an extensive previous canon, but helping build a library of designs for the future.

MR. X was responsible for two main segments in WandaVision. The first sequence flashes back to the moment where series villain Agatha Harkness (played by Kathryn Hahn) killed her mother and absorbed her coven’s power, draining all the other witches in the group until they become dried-out husks. In the second, Agatha takes Wanda (Elizabeth Olsen) through a journey into the past, and they wind up back in Agatha’s origin story, facing off for control with witch-husks as weapons.

“That’s all a little wild for a Marvel-Disney show,” Maiers says. “We had to be a little careful about the type of magic, and how dark we got with how everything went.”

A big part of that “not too dark” mandate involved figuring out what the dead witches should look like. “That was actually the first footage Tara gave us to do some testing on,” Maiers says. “They gave us Indiana Jones and the Last Crusade, the scene where Walter Donovan shrinks down to this eyeless skull with skin on it. They gave us that as the reference and said, ‘Now do this, but don’t make it so scary.’”

“So we went through a whole testing and approval process of deciding how Halloween we could go, and how far back we needed to pull it. The WandaVision audience goes all the way from children to people my age, so we had to find a happy middle that made everybody happy and didn’t scare anyone too much. And those two processes took quite a bit of time.”

Maiers says the desiccation effect was entirely digital — no practical effects or references involved except the Last Crusade scene. “We removed the witches completely — we kept the clothing, but took all the skin, faces, hands, and arms off, and replaced them with our scary witch doubles. We just literally went in and removed all flesh from those shots.” 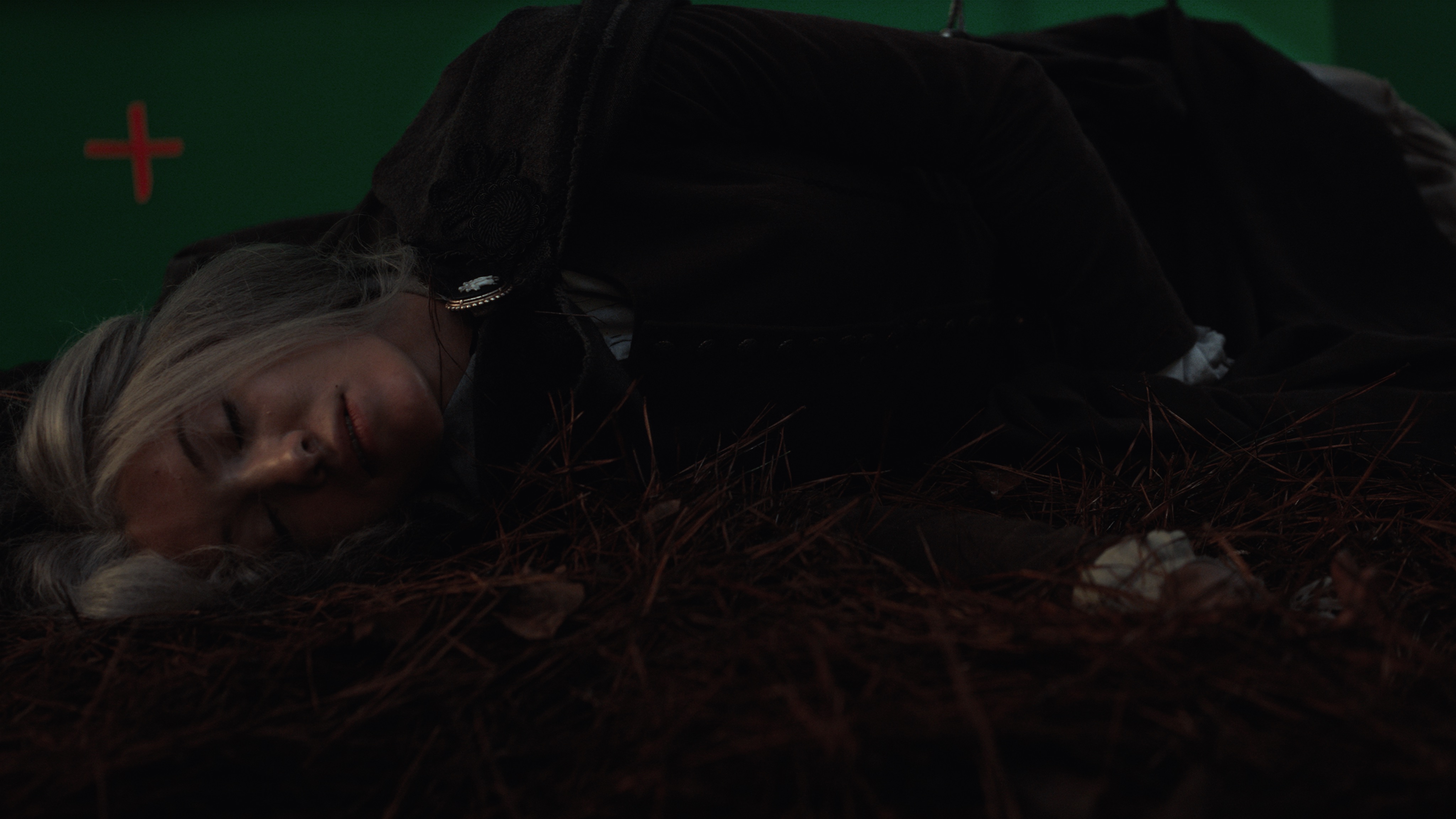 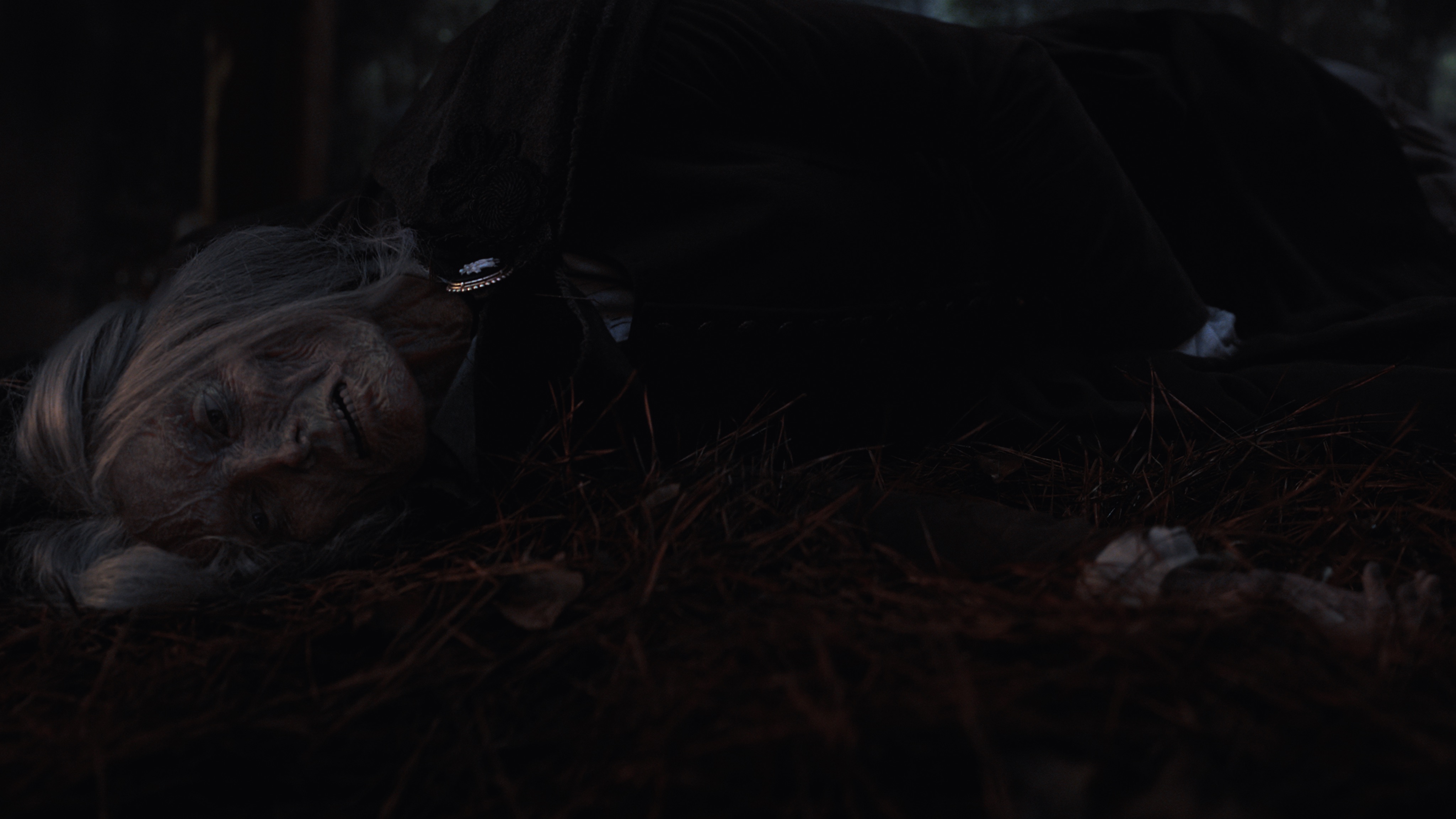 A fallen witch turns into a “Halloween” effect in WandaVision

There were some false starts along the way, as Maiers’ team made the effect too gruesome. “[Series director Matt Shakman] really loves horror films,” Maiers says. “But the studio wanted to go the other way with the effect, so we said, ‘We’ll find the middle there.’ We went for the eyeless, completely desiccated, skin-wrapped-around-the-bones look, and that was too far. So we backed up several times, to definitely a dead-looking person, but not a horror-movie thing. It was a process, but not a bad one. We had a lot of good laughs talking about it.”

The process of designing Agatha’s magic had its own series of false starts. “We started out by making her effects really wispy,” Maiers says. “We did some great concept art that Matt fell in love with. That’s really what awarded us the show — we sent him several different cool concepts. Our concept guy, Gaetan Borneuf, was the artist.”

In those original images, seen below, Maiers points out that each of the witches in the coven had their own color of magic, and each one had a slightly different visual approach, to make them more distinctive as characters. Ultimately, while Shakman liked the approach, he ended up deciding it was “too much for the scene.”

“Matt was really good at going ‘No, no, no, this isn’t gonna work, we’ve got to redirect,’ Maiers says. “The scene became more about those witches than it did about Agatha. Their magic wasn’t servicing her story. So I think Matt was really smart in going, ‘This is not where I want to go. I want to make this all about Agatha, so let’s simplify what the other witches are doing.’ And then we also had to think about Wanda as well, because Wanda has very similar effects later in the show. Our effects couldn’t be too big, because hers had to be bigger.”

Part of taking Wanda’s magic into account was coordinating with the other effects houses handling different sequences on WandaVision. “It actually was multiple months of going back and forth, trying different things,” Maiers says. “Industrial Light and Magic was doing some, and some of the other vendors, so it would be cross-pollination between all of us, tied in through Tara. She ran the ‘This is the Marvel Universe standard for this’ aspect of things.

“But Agatha had no pre-existing magic in the MCU. Tara said it had to be in the vein of other witch magic, what she called ‘wiggly-woo.’ We had to be in that world, but it needed to be a little darker and scarier, more directed and tendril-y and attack-y. That’s where we ended up — it was literally a three- or four-month attack to get there, just trying different things.” 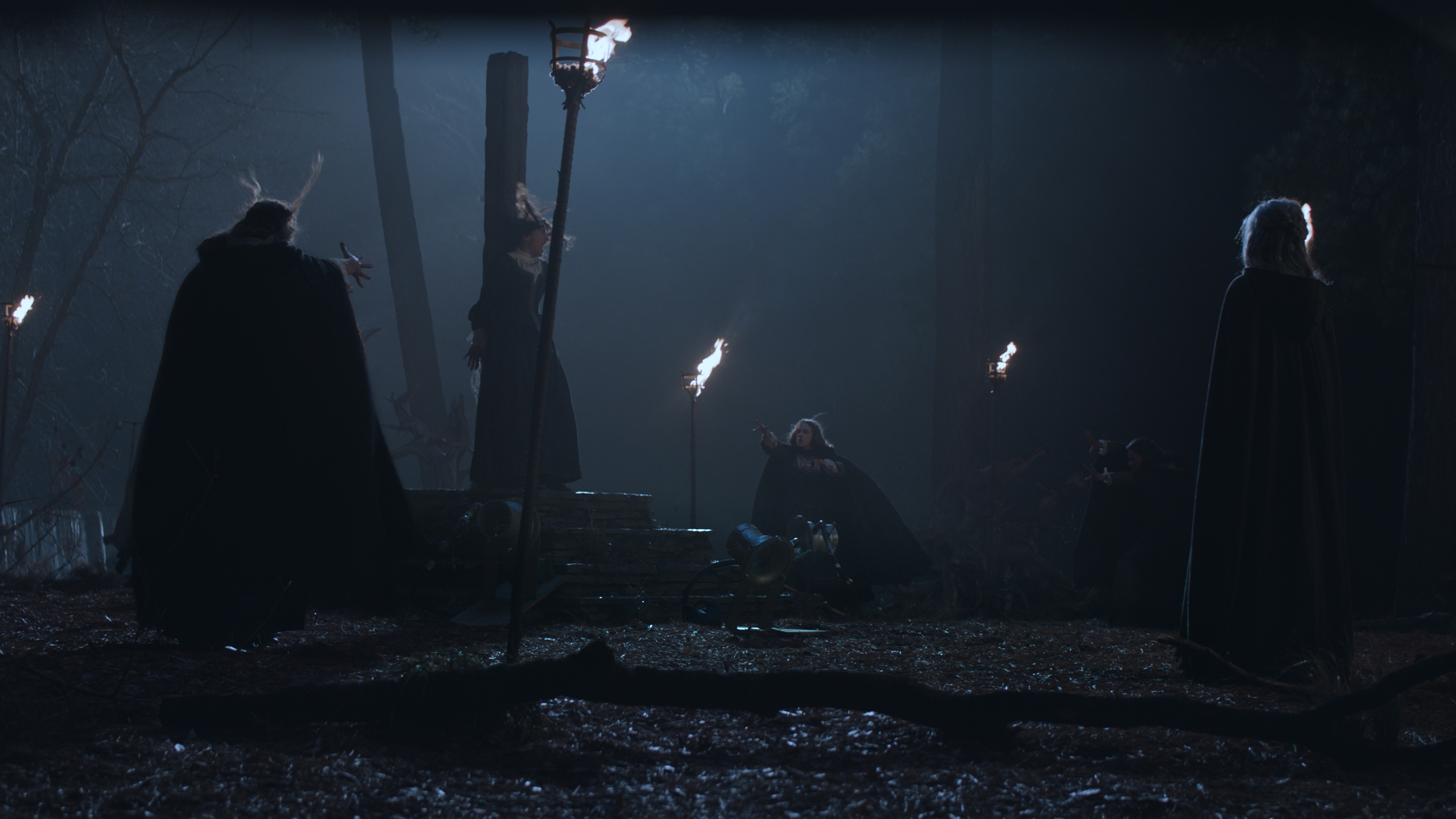 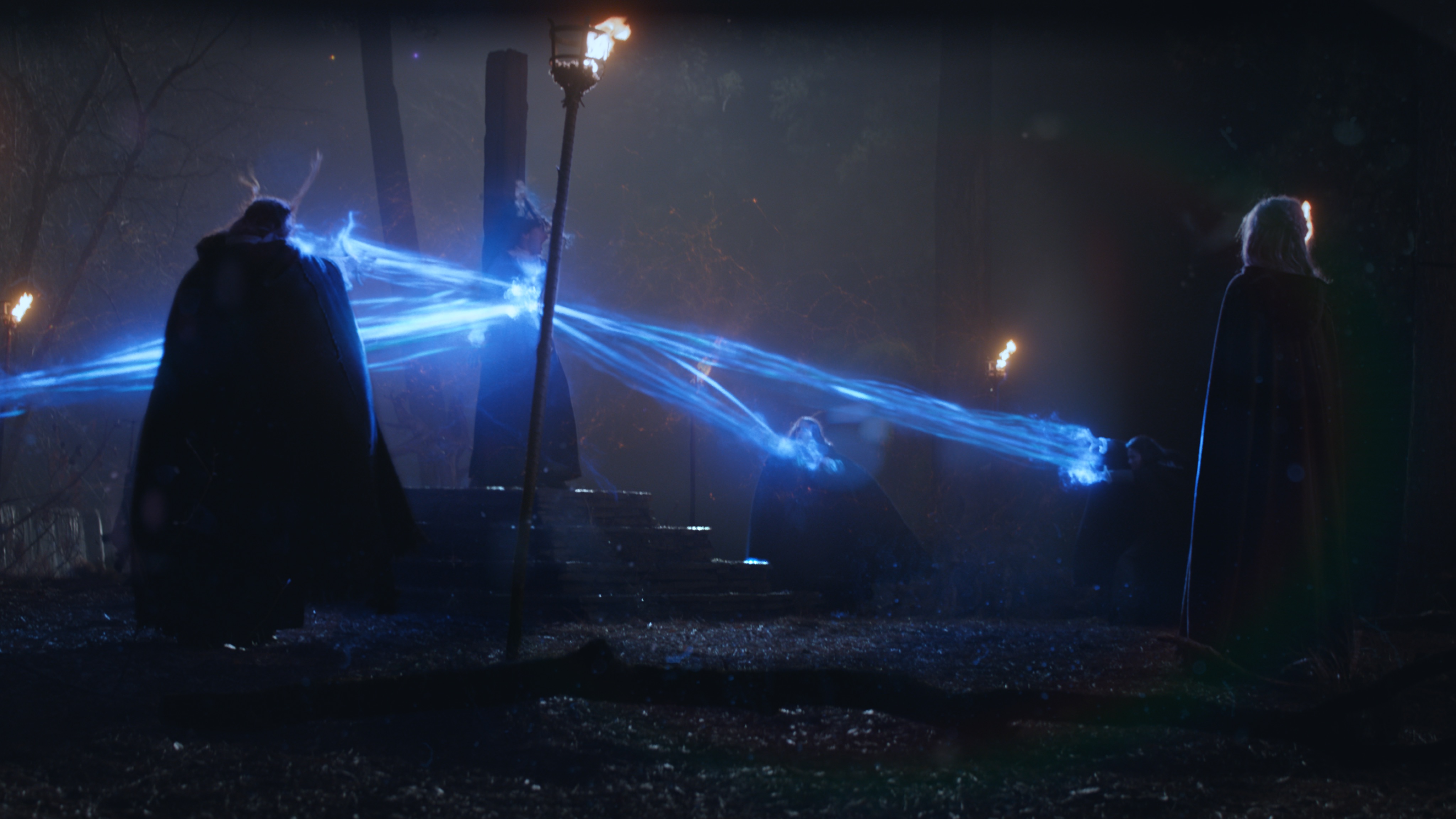 Once a “wiggly-woo” design was approved — which included decisions like how quickly Agatha’s energy beams and the light particles around them would move — all the VFX vendors had to use roughly the same effects, so Wanda’s magic would look consistent from scene to scene throughout the show. Because Wanda fights Agatha in the second MR. X sequence, Maiers’ group had to be aware of everything about how her magic looked in the past, and how it was evolving during WandaVision.

“Tara was instrumental in making sure we all connected on that,” Maiers says. “They would send us what ILM was doing, or whoever else was doing a sequence. Luckily for us, we had already done our homework. We were looking at the earlier movies, so we already had her look in the bag, we didn’t have too much trouble matching what was going on. It was more or less just adjusting how the magic was going to be approached differently here. In Age of Ultron, her effects are a little more orange-y and wispy. But they wanted it a little closer to Agatha’s here. They were trying to get them closer together in the world. So we made Wanda’s magic a little more tendril-y as well.”

At the same time, Agatha and Wanda had to have distinctive magic, and the color was a key element of keeping the action between them clear. Maiers and MR. X had some freedom of choice in designing Agatha’s powers, but they were restricted by the existing magic in the MCU, the powers used by characters like Doctor Strange, Hela, or Loki.

“There’s a color palette in the Marvel Universe, and we had to be very careful not to cross-pollinate the color,” Maiers says. “We actually did quite a bit of testing to make sure we stayed out of the reds, because that’s Scarlet Witch’s world, and we stayed out of violet, because that’s somebody else’s world. We had to stay in these deeper purples. And that becomes Agatha’s color. And now the colors we used will be posted in the Marvel universe, she’ll own those. As the origin-story creators, we got to be the ones to establish that color.” 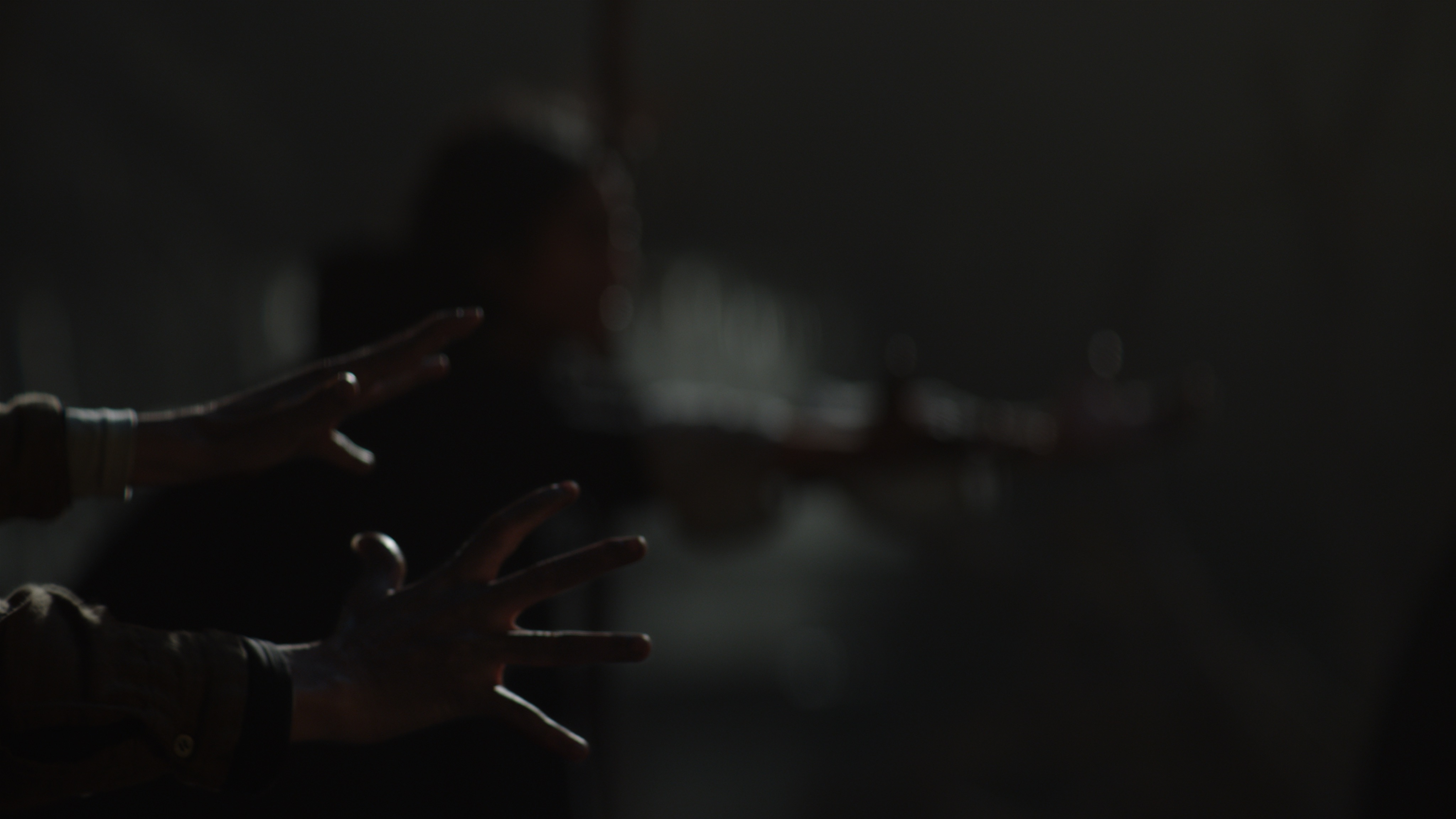 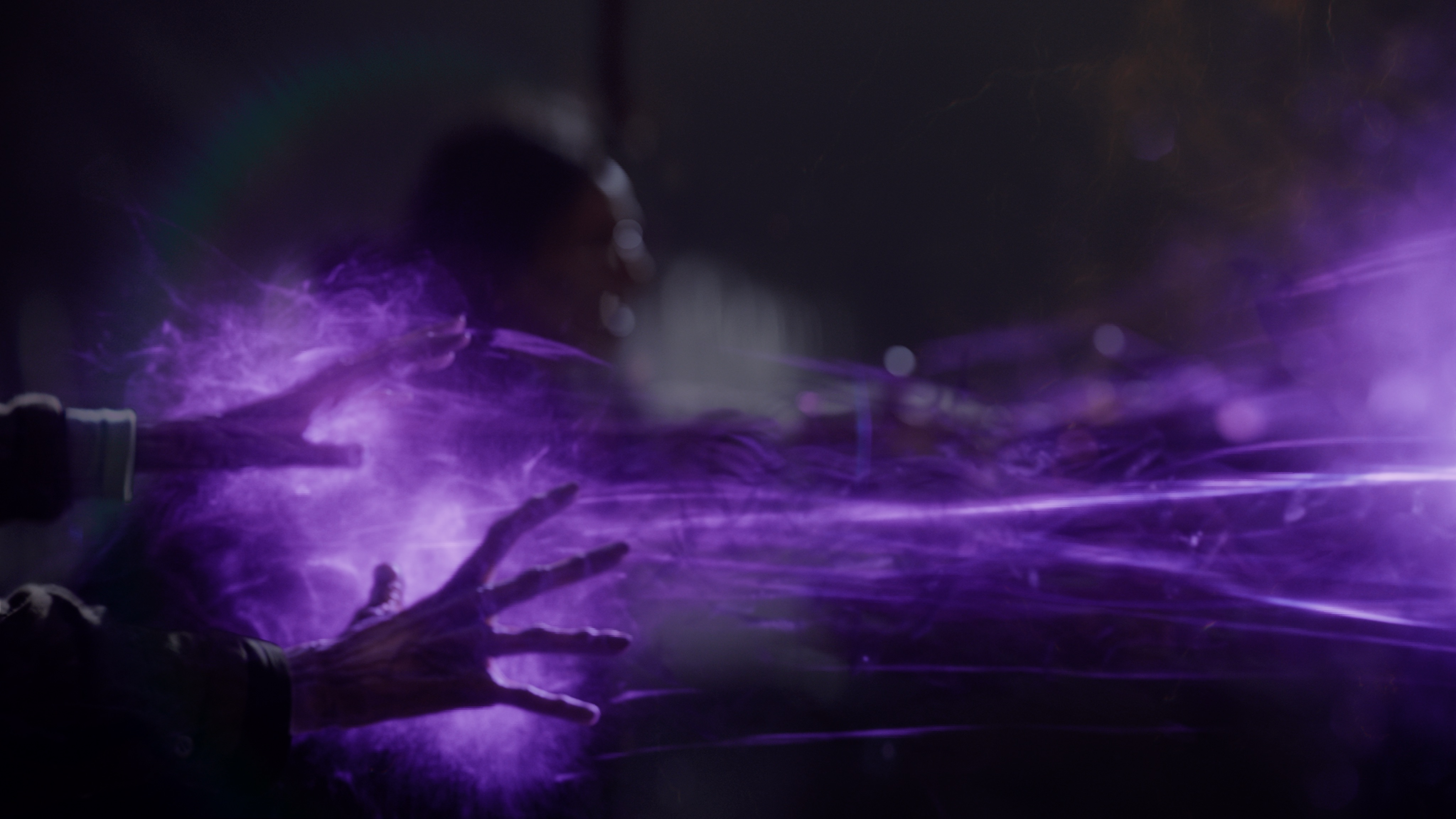 Maiers says MR. X also got to establish the specific Agatha Harkness magic style: “That tendril-y magic, the way it vaporously moves around, that is now canon. That’s her world, that’s what’s going to be her look. ILM and ourselves went back and forth to come up with that look. It took us about 10 months total to get these sequences done. And now, in the future, [other VFX designers] will have to look back on what we did way back in 2020.”

As far as VFX contract work goes, Maiers says WandaVision wasn’t a particularly difficult or complicated job, apart from the turnaround time — the second sequence he worked on would normally take three to four months to produce, but since the shooting was delayed by COVID-19 quarantines, they had to turn it around in six weeks. “And when you’re working with particle simulation, what you get is always a crapshoot. You’re going, ‘Well, let me change this parameter and push the button and see what happens.’ So you want to find guys who have pushed that button an awful lot, and already know what the settings should be. And when you’re making something up that hasn’t been done before, you’re doing an awful lot of pushing that button.” 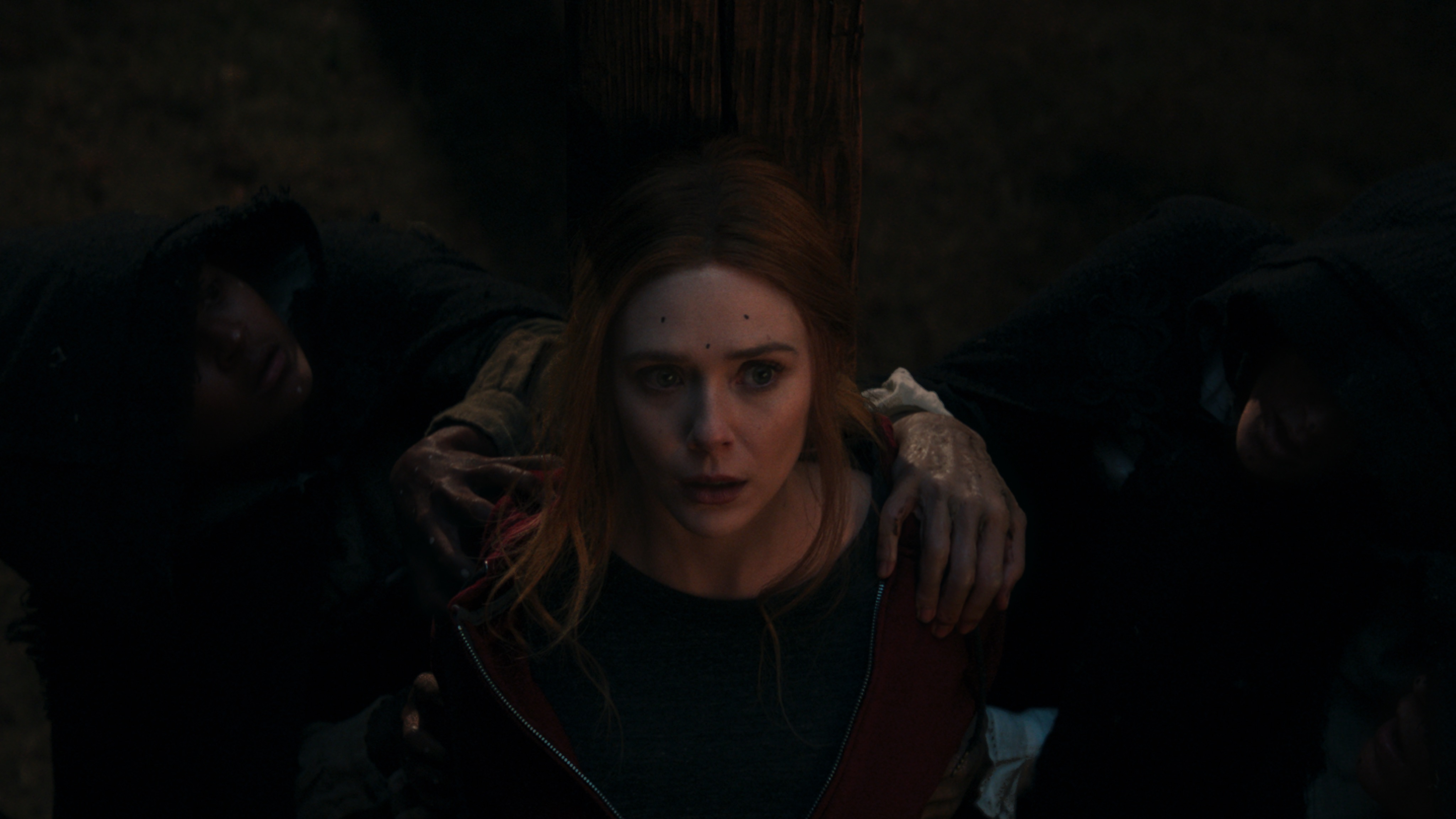 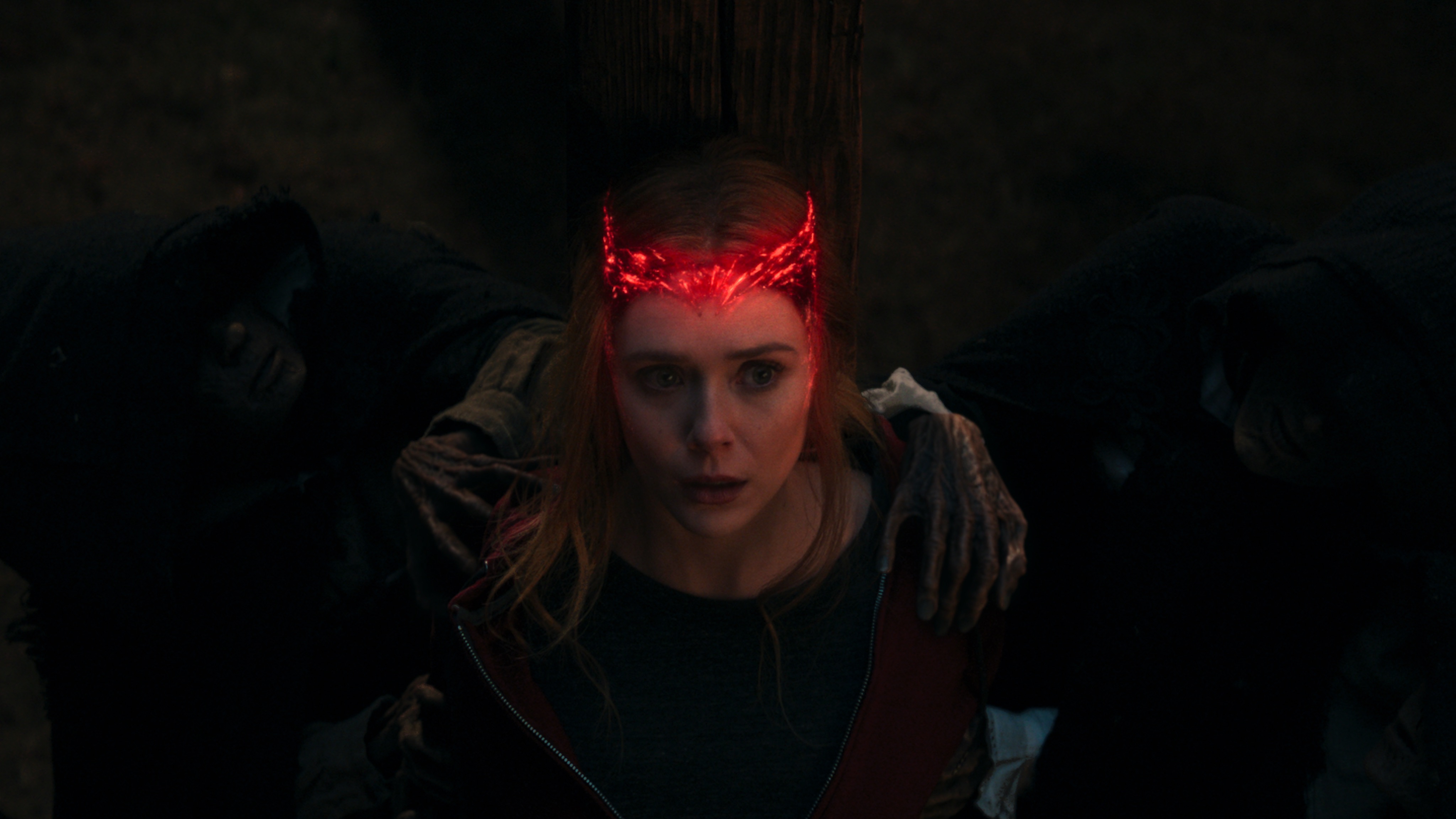 Wanda gets her Scarlet Witch crown in WandaVision

Disney’s streaming service costs $6.99/month, or can be bundled with Hulu and ESPN Plus for $12.99/month.
Get Disney Plus