Behind the scenes on The Nevers’ stunning lake fight sequence

“All the actors are completely real the whole time.”

Share All sharing options for: Behind the scenes on The Nevers’ stunning lake fight sequence

[Ed. note: Spoilers for The Nevers episode 3, “Ignition,” ahead.]

HBO’s Victorian adventure series The Nevers fully comes into its own in episode 3, “Ignition,” during a terrific fight sequence that starts out of nowhere. Series protagonist Amalia True is one of “the Touched,” people who gained unearthly powers from a supernatural event. She’s made enemies, so in “Ignition,” directed by David Semel and written by Kevin Lau, she’s suddenly waylaid during a carriage ride, and flung off a bridge and into a lake. A hulking adversary named Odium comes after her — and as he calmly walks out onto the surface of the water to reach her, she realizes he’s one of the Touched, and she’s in immense trouble.

In the sequence that follows, Amalia (played by Laura Donnelly) can’t surface to fight Odium (Martyn Ford) without him stomping her face or slashing at her with a heavy chain and hook. And she can’t stay underwater for long without drowning. The battle that follows is fast and frenzied, and frequently captured in shots where Donnelly is swimming under the water, while Ford appears to stand on the surface above her. It’s the kind of sequence that prompts “How did they do that?” questions. So Polygon went to Nevers VFX supervisor Johnny Han to ask.

The most surprising thing Han tells Polygon is that the sequence doesn’t use digital actor replacement at all, and very few of the shots use stunt doubles, digital trickery to combine the above-water action with the underwater action, or digital replacements for the performers. “All the actors — and we’re really proud of this — are completely real the whole time,” Han says. “We kept the option of digital doubles in our back pocket if it didn’t end up looking so great, but our actors did an amazing job. Laura, who plays Amalia, was such a trooper, I cannot tell you how hard she worked through that, and never blinked an eye at what she was put through. Helen [Steinway Bailey], her stunt trainer and double, would always rehearse the scenes with her, and using her was always an option. But to Helen’s credit in training Laura, we didn’t end up needing to use Helen, save for two or three shots that were on wires. Laura did 99% of what you see onscreen.”

“It was physically really challenging,” Donnelly tells Polygon. “But I had an absolute ball. It was nothing like I’ve ever done before, for sure. I’d never done any kind of diving or anything, so I had to spend two days training just to learn. So I was in a wetsuit in the underwater stage at Pinewood Studios, and I learned how to go five meters under in the breather and the goggles and everything. On the second day, they expect you to take the breather and the goggles off, and you just have to swim 25 feet across the tank. That was probably the single most intimidating thing I’ve ever had to do for work.”

The sequence was shot in late winter, so it was impossible to do it all outdoors: “It wasn’t just about not putting actors into freezing water, to be honest,” Han says. “It was like, ‘It might be frozen, we may not be able to put anyone in the water.’” But the crew did get the opening and closing shots of the fight on location, to ground the sequence in reality.

“That’s a trick,” Han says. “Make the first shot real, and the last one, and it’ll help you believe the sequence.” For that opening shot, Ford walked out onto a hidden platform under the surface of the actual lake, and the water surface was digitally replaced.

“At one point, we did discuss, like, ‘Why don’t we just do the full sequence with a hidden platform?’” Han says. “And my my view to that was, it’s been done quite a bit. My favorite example is Superman 2, when General Zod first arrives on Earth. He arrives in the middle of a little pond, and he walks out to the shore as if he’s walking on water. Hidden platform, it always works.” 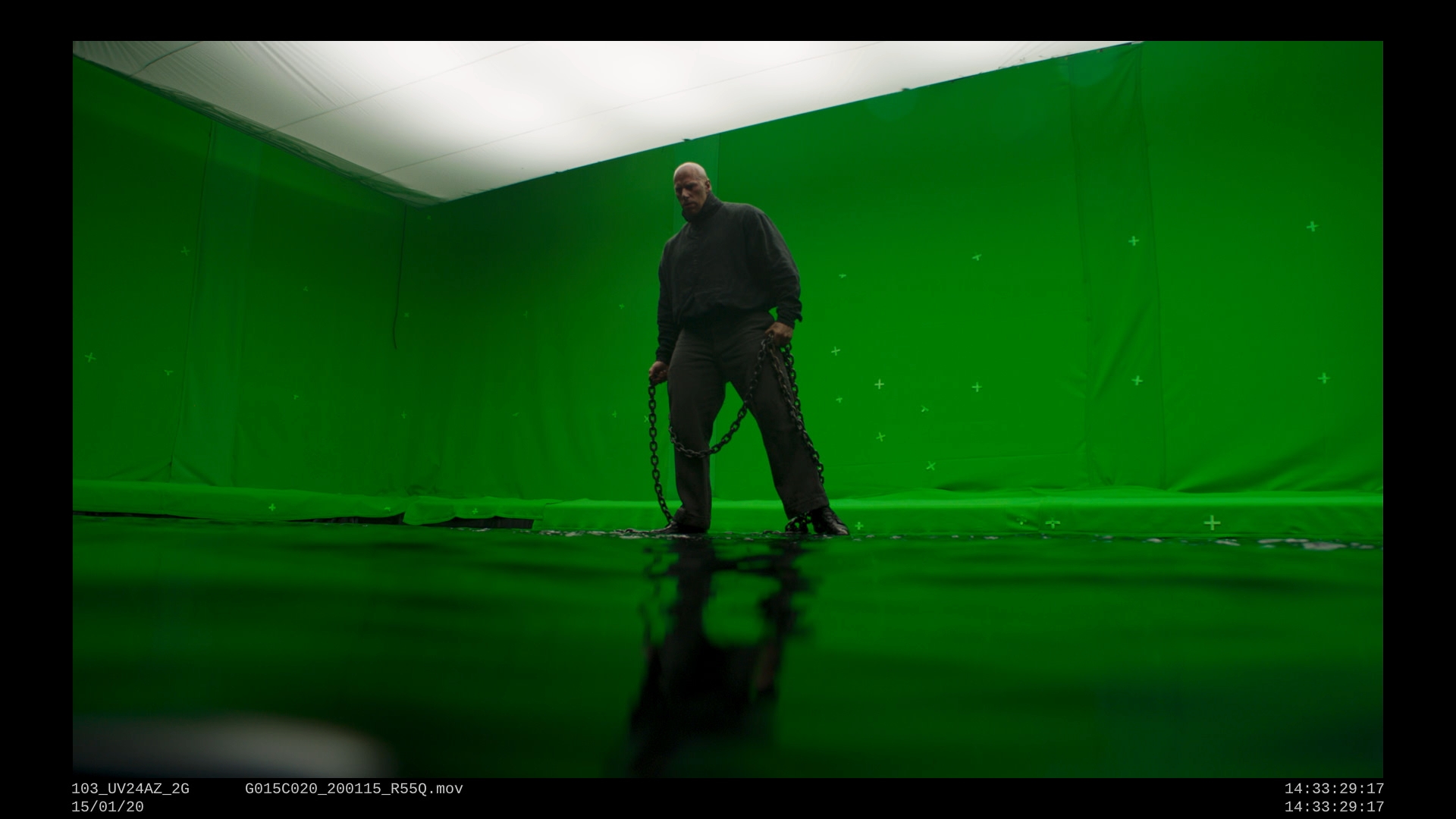 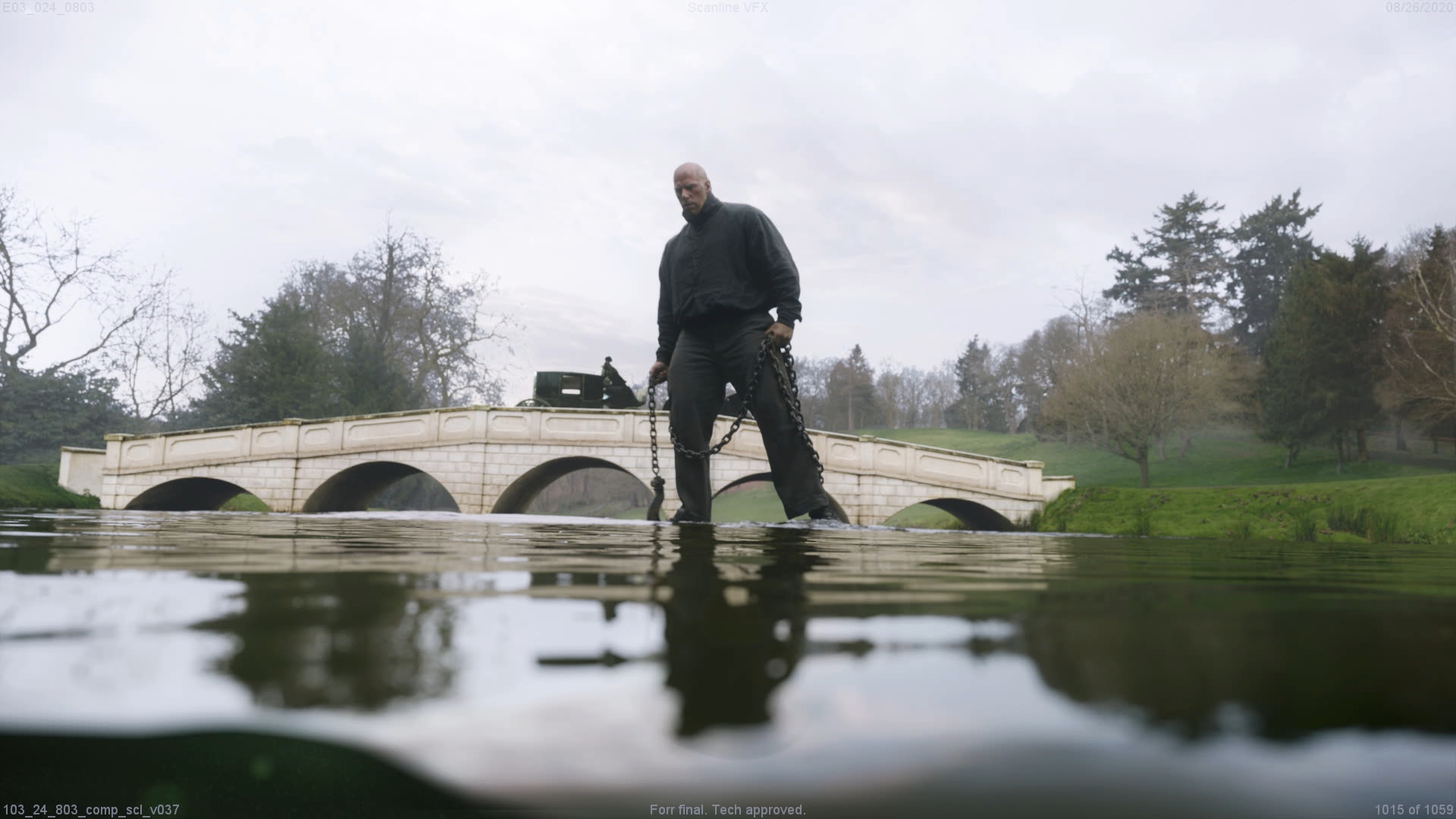 His question, though, was, “How do we own this, and make it true to Odium’s character?” He and his team wanted the water’s response to Odium to be distinctive, and to strongly suggest the supernatural effect of his powers. “Very early on, I had this idea that the water should behave almost like he’s got a special magnetic field around him, or a field that changes the behavior of water,” Han says. They used real water physics to inspire the movement of bubbles and eddies in the water, but also experimented with memory-foam mattresses and trampolines to inspire the visual effect of the water recoiling from Odium’s presence, then bouncing back rapidly. Luckily, Han says, there was a trampoline park “literally across the street from our studios,” where he and his team could go for visual inspiration.

“The surfaces aren’t solid,” Han says. “They’re flexible, but there’s still tension on it. And that way, the water would really feel like it’s responding to him, he’s not responding to the water.”

While Ford was on location for that opening shot, Donnelly was digitally added after the fact — all her action for the sequence was shot in that tank where she was trained, at England’s Pinewood Studios. A special camera that could be positioned on the water’s surface was used to capture the shots where Amalia is underwater, ducking Odium’s swinging chain or interacting with him from below. That let the effects crew get a split-screen effect for the two actors without digitally compositing them into the same shot, by simultaneously capturing the action above and below the surface. 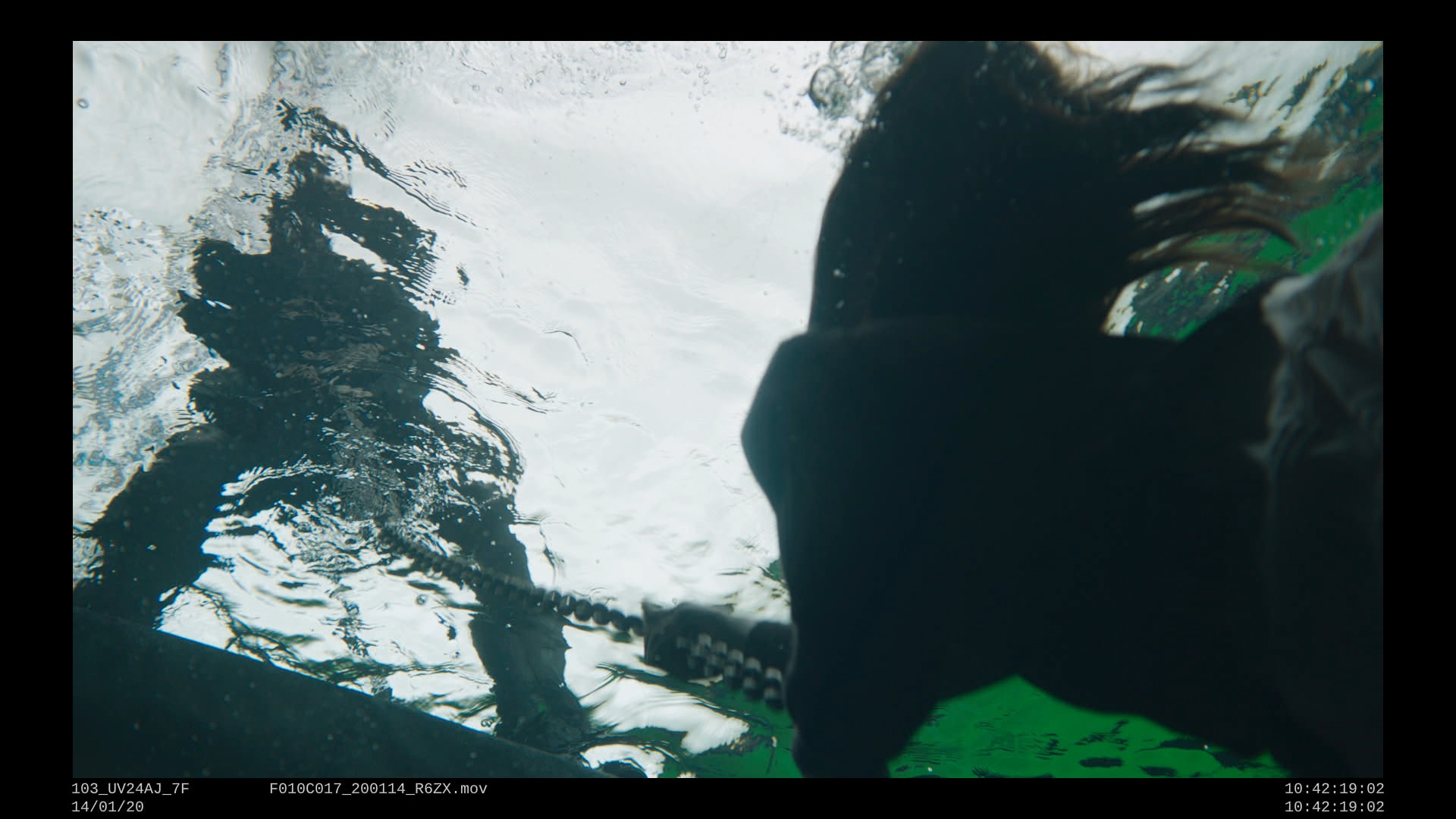 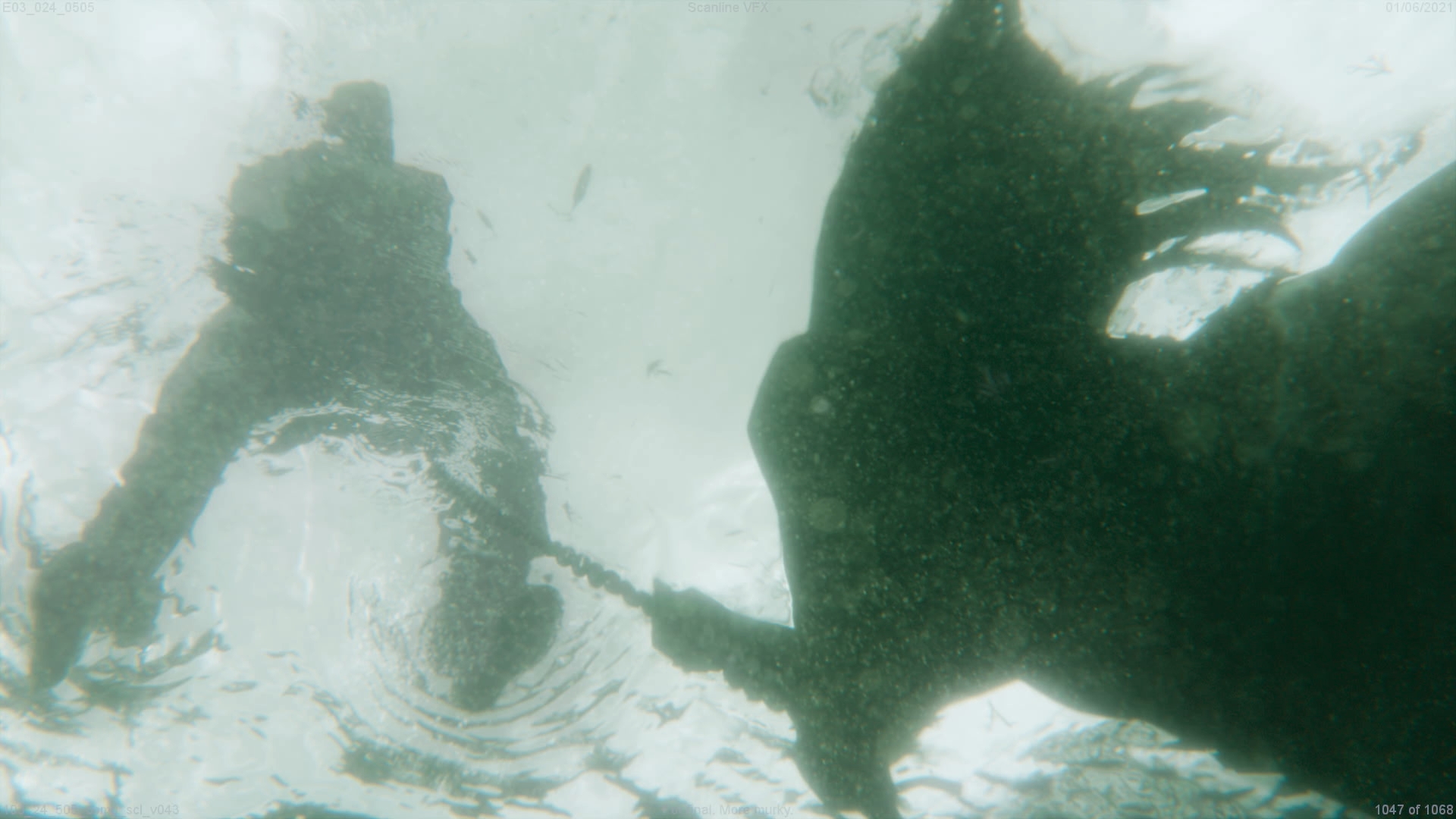 “We were able to use a special underwater housing for the camera that was specially balanced weight-wise,” Han says. “Something underwater is quite buoyant, and you can move a camera and a crane really easily, but the moment you get above water, it’s really heavy. So we had a special housing that let the camera easily go above and below water. It’s also a very small housing, so it didn’t create a big splash or an air-bubble every time we went underwater.”

“We’re really proud of these shots,” Han says. “Collectively, we all feel that sequence really works because we didn’t do too much CG. We used the VFX where it’s really needed, to replace the water and add the lake with the green screen. And it wasn’t too fantastical. Every shot feels like a cameraman was actually doing it, because the cameraman really did operate it.”

For some of the shots looking up from underwater, seeing Odium from Amalia’s point of view, an overhead white screen was used instead of a green screen, to capture the feeling of an overcast sky. “With the way water distorts and refracts the image behind it, you can get away with a lot,” Han says. “If we made it green, it would be very tricky to extract the green. Little things like that help — any freebie we get on set, in camera, and not have to do it later in post, we’ll take every opportunity … So we had a system where we could interchange it between white and green, pretty much like a stage curtain we could just pull back and forth.” 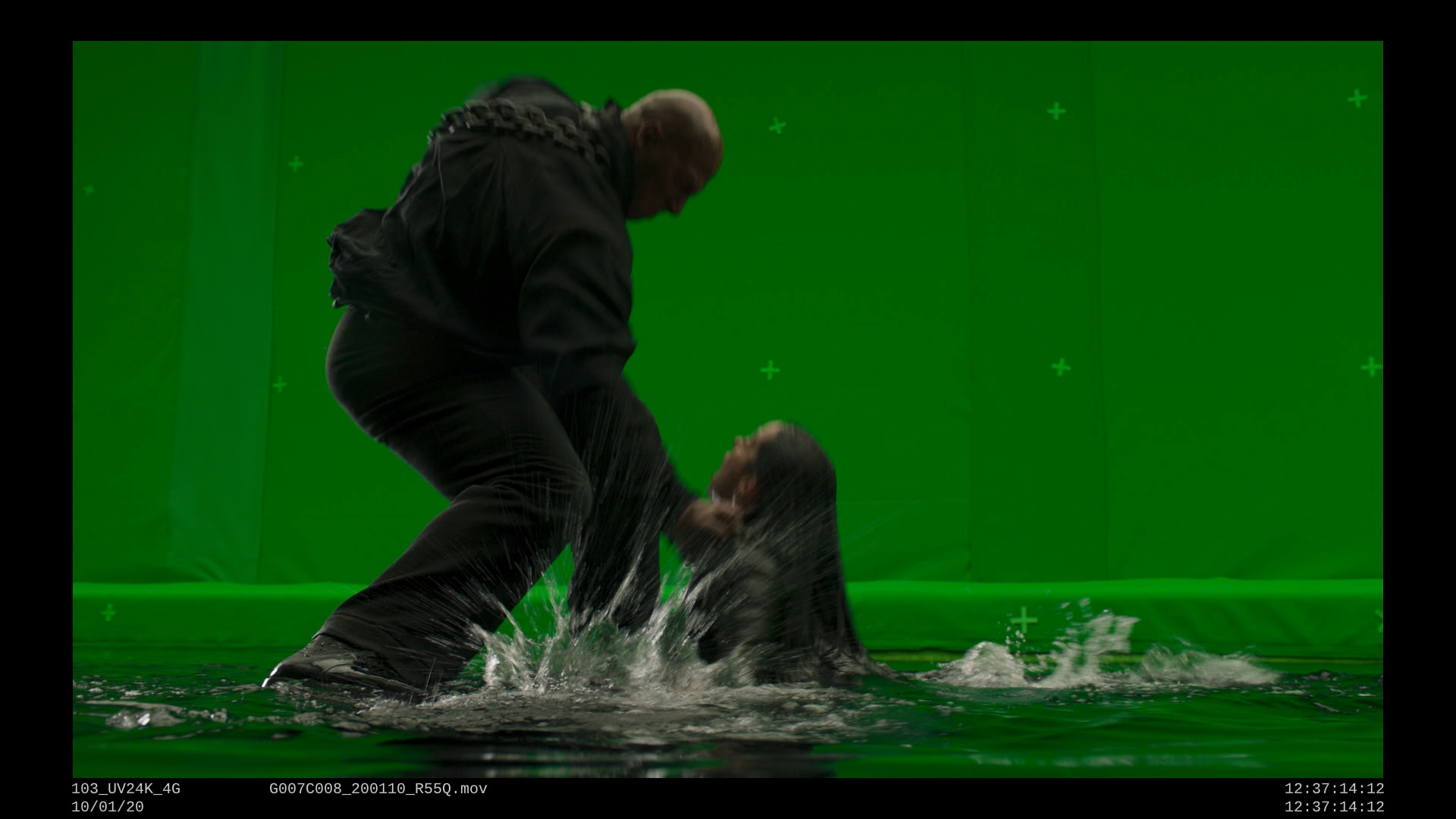 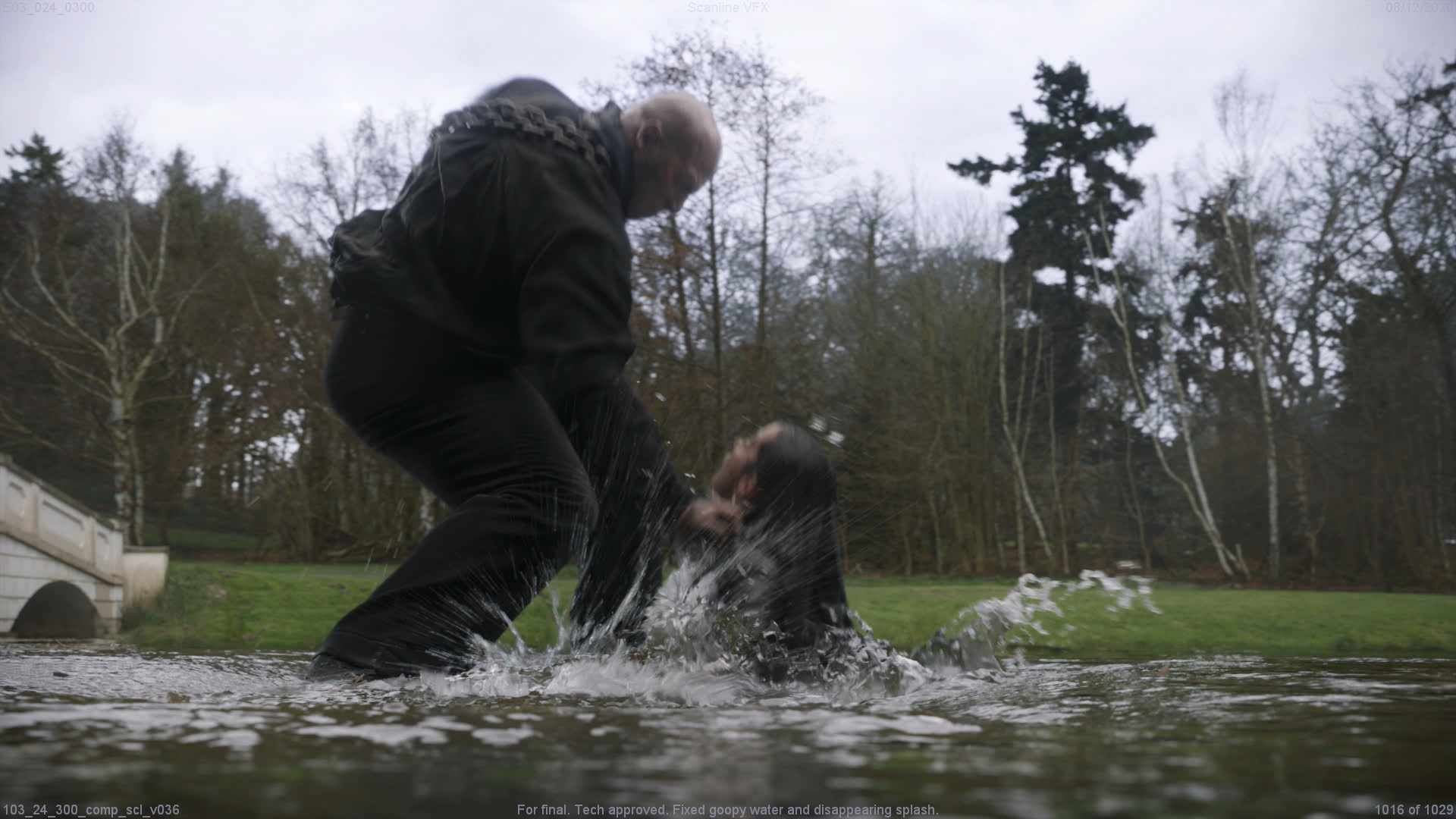 Han says one of the biggest challenges in planning the sequence with stunt coordinator Rowley Irlam and special effects supervisor Mike Dawson was in designing the sequence to surprise viewers, while teaching them more about the abilities of the Touched. “How do you make it something that tells the story of their powers, and isn’t just a generic fight sequence?” Han says. “How do you show Amalia’s cleverness, not just being a fighter, but a thinker?”

Ultimately, the answer was in having Amalia use Odium’s power against him, by using his inability to break the water’s surface against him, and strangling him from below the surface with his own chain.

“Those shots, we got in profile,” Han says. “Ford is hanging on four wires, almost like a hammock, because we wanted him to actually be leaning into the water. We didn’t want him to look like he had a flat back, we wanted him to really feel like he was dipping into the water, again like a trampoline. And Laura is actually underwater. It’s all the same performance, all in one take. We didn’t shoot her separate, we didn’t shoot him separate.” 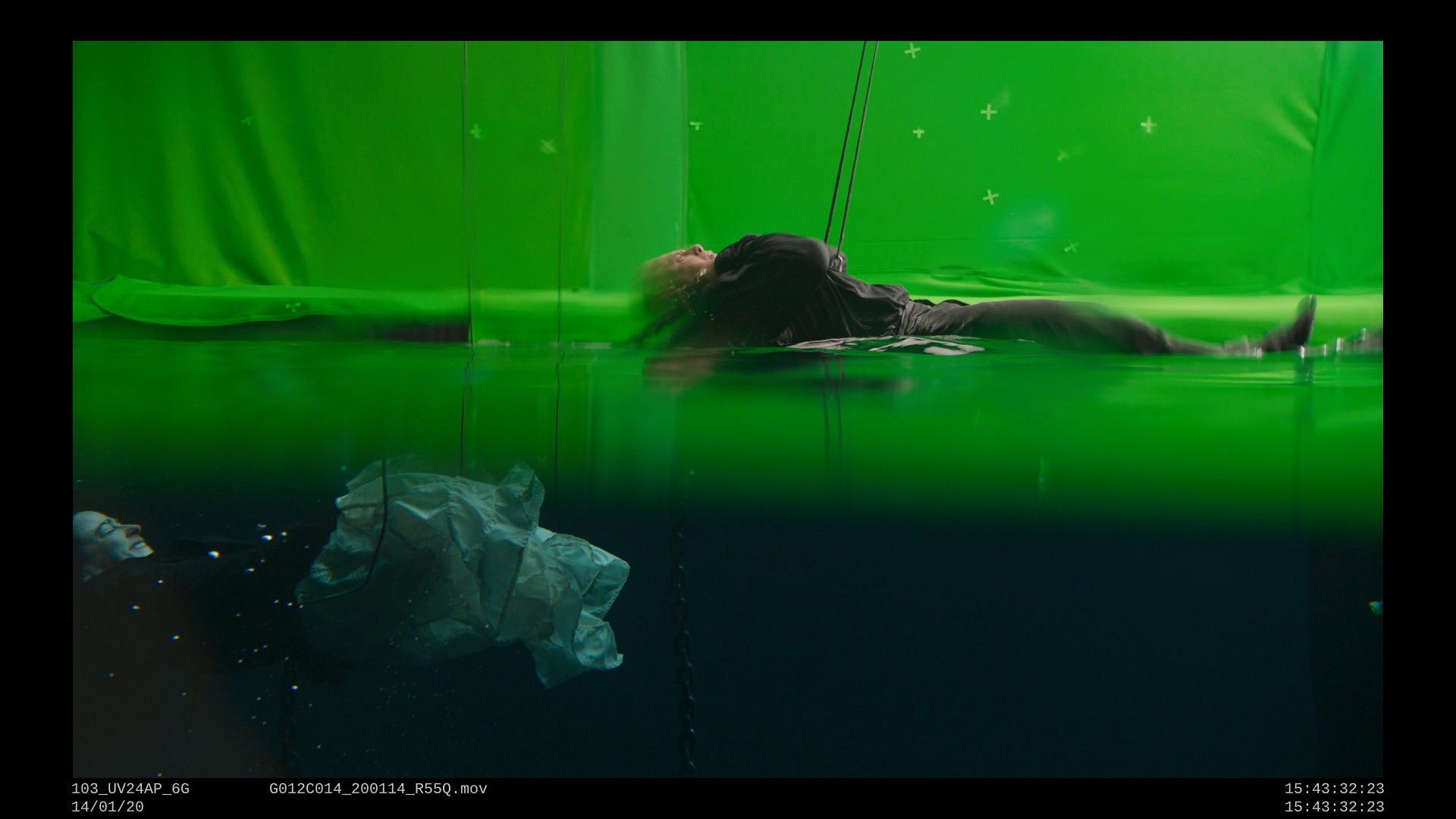 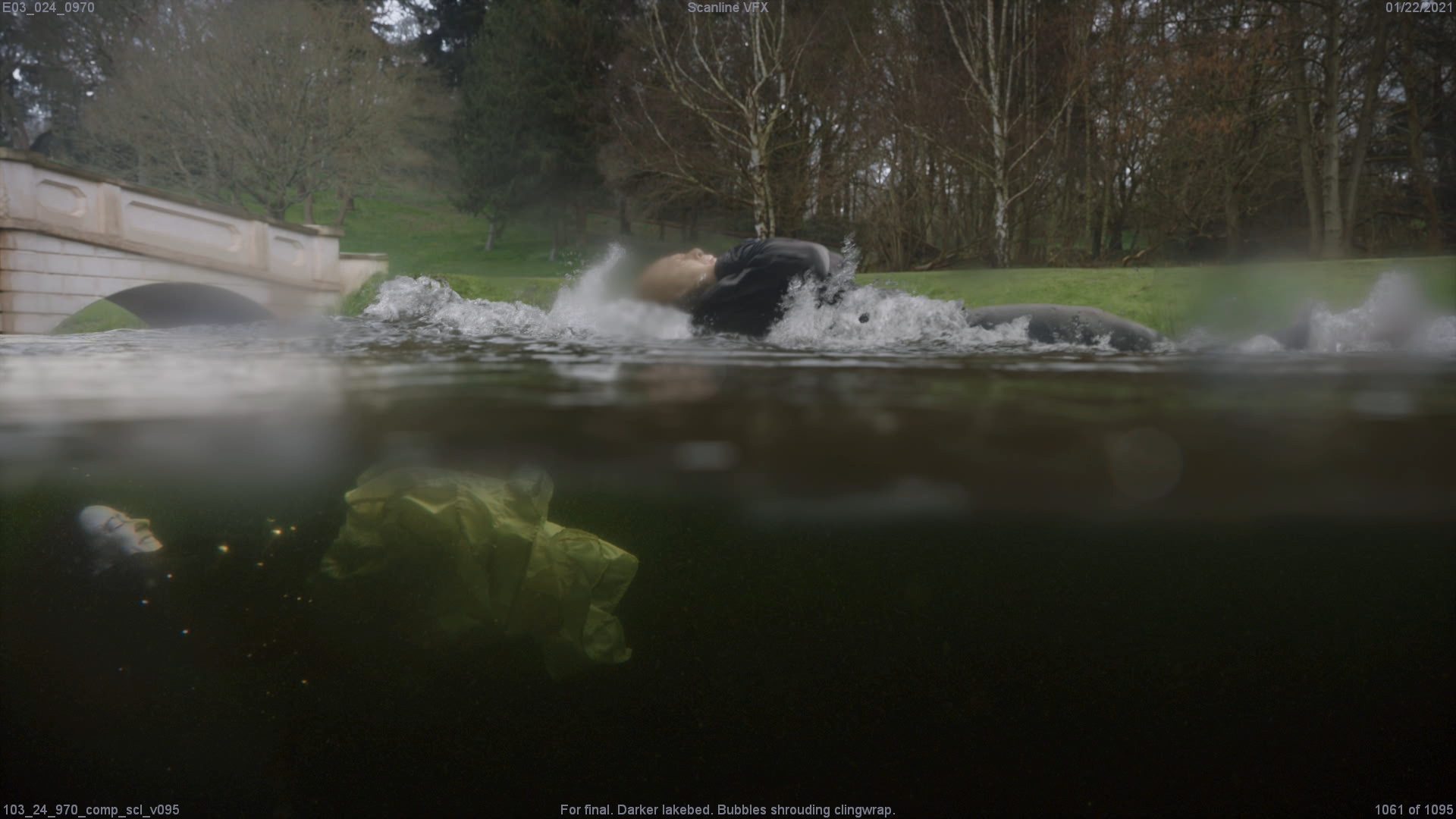 Working on winning the fight.
Photo: HBO and Photo: HBO

Again, Han says most of the digital tinkering with that sequence was in replacing the green screen with the location, and digitally creating a new surface for the water. “The water’s reaction toward him struggling, that has all been replaced to be more active, to make it look like he’s really struggling, the water’s really lapping and splashing against him.”

Donnelly says that in spite of the physical demands of the sequence, she was confident with the work. “I used to be a gymnast when I was younger, so I’m quite familiar with throwing myself up into the air and hopefully not landing on my head,” she says. “It was physically exhausting, but it was so much fun. Martyn Ford is not only the biggest man on the planet, but one of the nicest men as well. We had a lot of fun as I tried to climb up him dripping wet and in Victorian garb.”

Ultimately, Han feels the sequence works because so little of it is digital that the reality of it plays for the audience. “Imagine what the sequence would have looked like if we did do it all in CG,” he says. “Often what happens is that you get really crazy camera moves that feel supernatural. The interesting thing about visual effects is, you sometimes can go in too many different directions. The unlimited canvas is often your downfall, because there’s sort of an arrogant way of thinking that says, ‘We can dream up something better than reality.’ But when when you have something to anchor it with, it always helps.”

For more behind-the-scenes footage of the fight, watch HBO’s featurette on the episode. 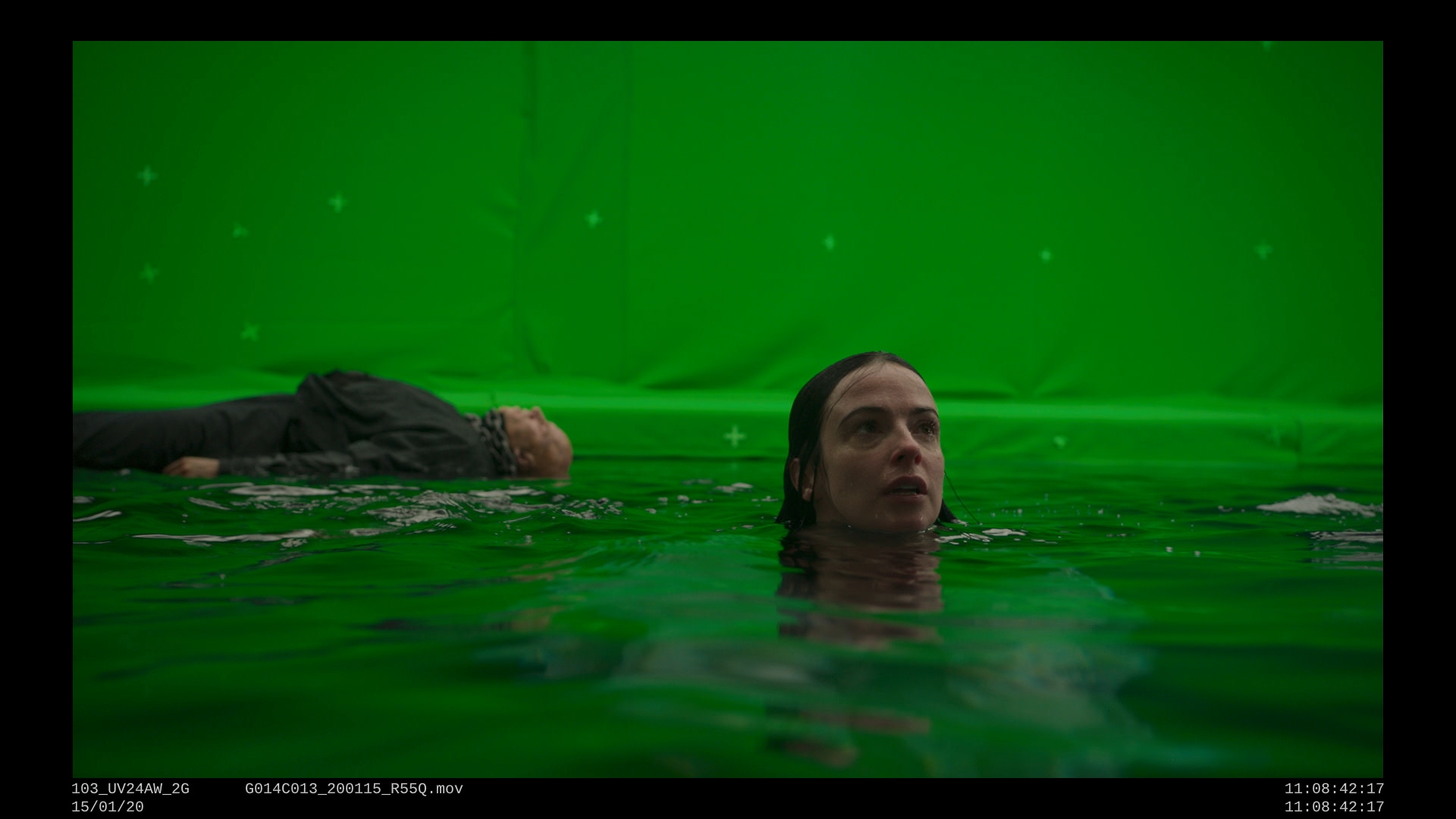 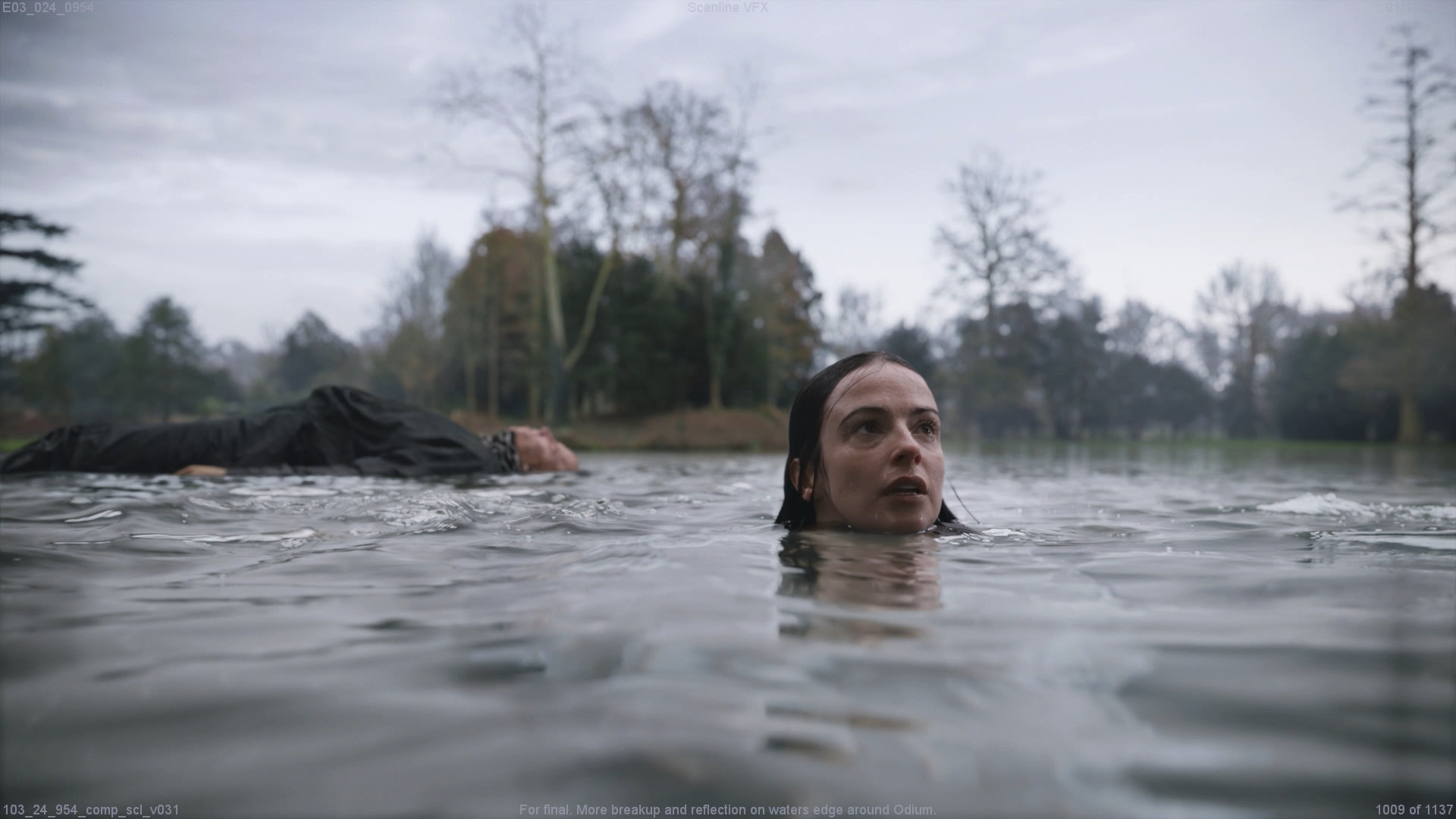 The finale of the fight
Photo: HBO and Photo: HBO