The Yawning Portal D&D terrain is an over-the-top modular toy playset, and also I love it

Share All sharing options for: The Yawning Portal D&D terrain is an over-the-top modular toy playset, and also I love it

Every great Dungeons & Dragons campaign starts in a tavern (except when it doesn’t). There’s no more famous tavern in all of 5th edition than The Yawning Portal Inn. In Nov. 2020, Polygon announced that WizKids was bringing that tavern to life as a modular plastic kit, and last week they sent us the very first unit off the assembly line. I’ve been fiddling with it for a few days now, and I’m kind of blown away.

This $349.99 item is slightly different than what we were originally shown in digital mock-ups, but it’s easily one of the most impressive and detailed terrain sets that I’ve ever seen. Basically, it’s the G.I. Joe aircraft carrier for Dungeon Masters, something that could easily become the centerpiece of your ongoing home campaign. 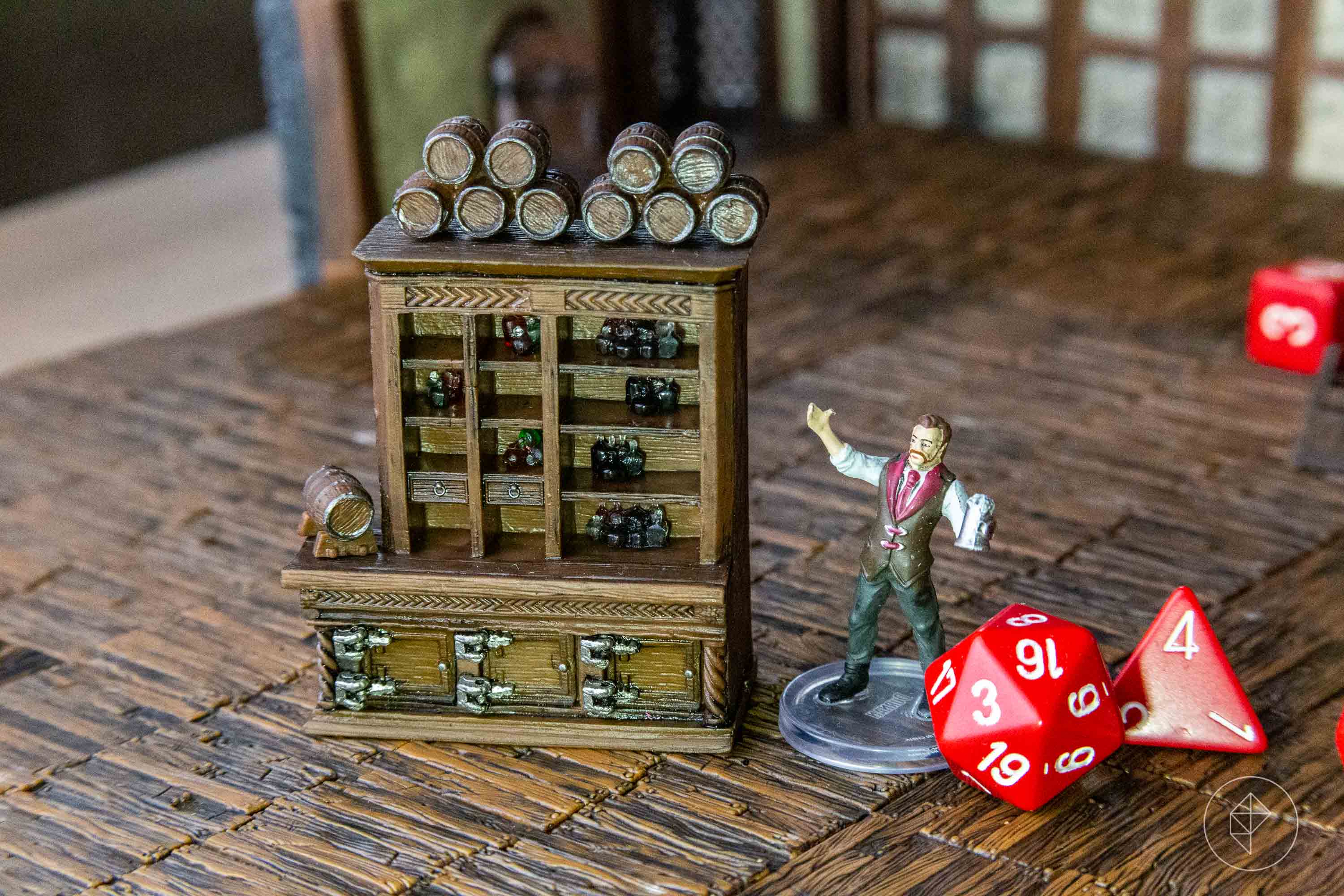 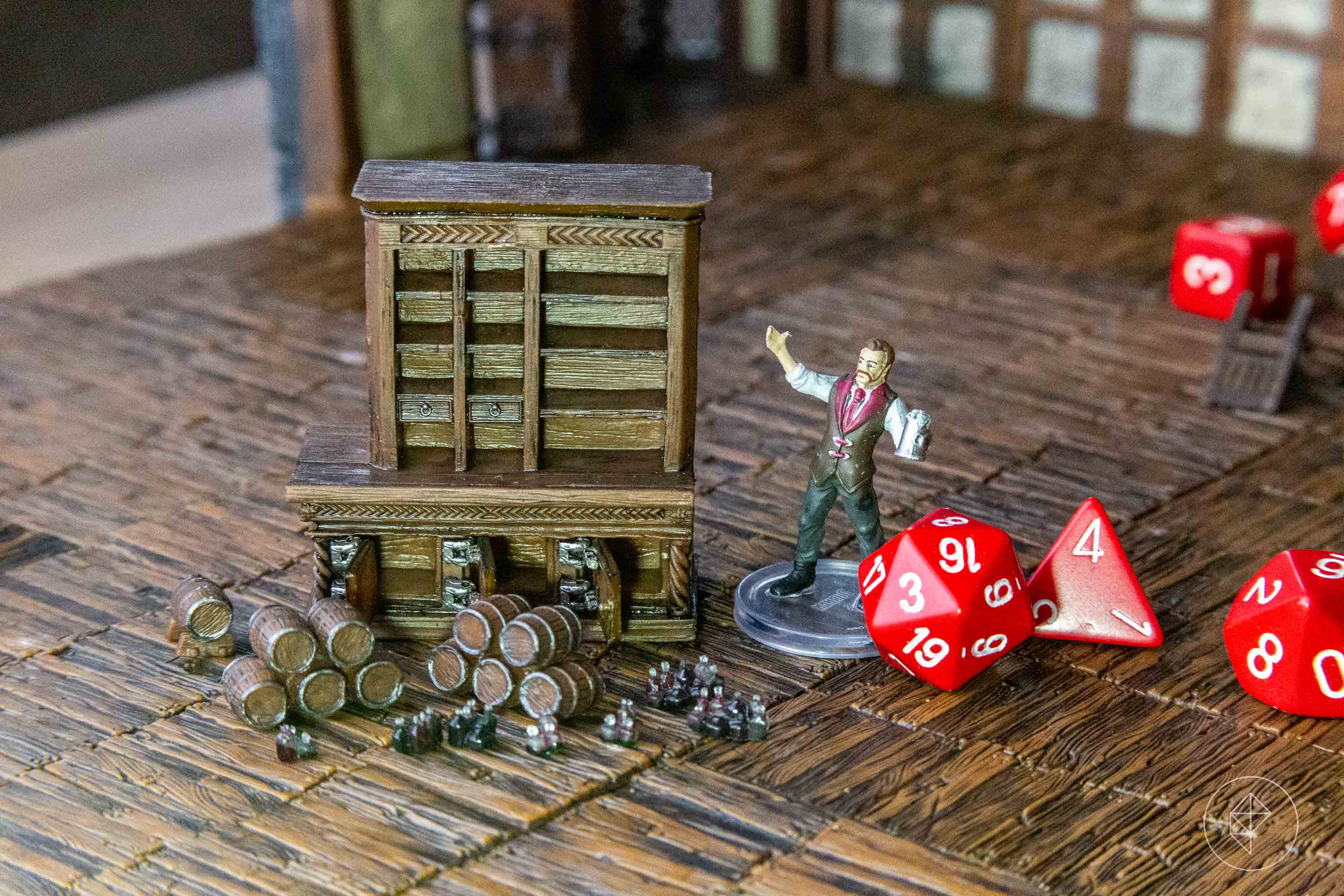 The Yawning Portal has been featured in three recent books published by Wizards of the Coast. Tales from the Yawning Portal stars its proprietor, a mysterious retired adventurer named Durnan, and includes a revised edition of the famous Tomb of Horrors among its many unconnected adventures. Waterdeep: Dragon Heist, which we reviewed in 2018, actually begins inside the tavern and returns to it several times throughout the adventure. Meanwhile, Waterdeep: Dungeon of the Mad Mage uses the famous watering hole as its singular hub throughout the entire adventure. In it, players will delve again and again into the titular Yawning Portal — a gateway to a deadly, multi-level dungeon lurking beneath the ancient city.

WizKid’s interpretation of that portal itself is pretty clever. It includes a light-up infinity mirror which, once you tune out its highly reflective surface, is still extremely evocative at the table. But the real treasure here is the bar itself, which includes cabinets that open and close, a host of translucent colored plastic bottles, and plenty of tankards of ale.

I noted that it’s not quite what I expected, and that’s because early mock-ups shown last year featured two additional stories made out of cardboard rising up above the ground floor. The final product only includes one story, but it’s made of sturdy plastic — same as the rest of the set. I actually don’t see this as a big deal, because the higher up off the surface of the table you stack things the more risk you have of knocking something over. I’ll primarily be using this set without the second story attached at all.

Everything included with the set is pre-painted, which means a multi-color base coat and some simple shading. Out of the box, the workmanship is decent. Durnan looks dashing, and all the colors match throughout. All of the components are well-formed, free of flashing and mold lines, carefully glued together where needed, and decently painted. Experienced painters can really elevate the look here with some quick highlights or drybrushing.

An especially nice touch is all the Yawning Portal branding, which is stamped onto little plastic barrels, the bed linens upstairs, and woven into the faux leaded glass windows up front. WizKids even included a little statue of Tymora for players to drop a coin at for good luck on their way down into the Undermountain.

If you’re looking to run Dragon Heist, which is an excellent little introductory campaign, know that this set can easily be reconfigured to stand in for Trollskull Manor. That’s another Waterdavian inn that the player characters can acquire during the adventure. You might choose to pick up one or two additional sets of Warlock tiles to build the full three-story layout, or you can just rearrange the floor tiles included with the Yawning Portal set as needed and omit some walls and doors.

WizKids also offers an expansion set with more tables, chairs, and sections of bartop to make the tavern of your dreams. It also has a set of miniatures called the Friendly Faces Pack, seven characters who feature prominently in Dragon Heist. That set even includes Volothamp “Volo” Geddarm, the primary quest giver in that campaign and the in-fiction author of Volo’s Guide to Monsters.

No firm delivery window is available at this time, but pre-orders are now open. Expect sets to begin rolling out over the next few weeks and months as they arrive from manufacturing overseas.

D&D Icons of the Realms: The Yawning Portal Inn was reviewed with the final retail product provided by WizKids. Vox Media has affiliate partnerships. These do not influence editorial content, though Vox Media may earn commissions for products purchased via affiliate links. You can find additional information about Polygon’s ethics policy here.

D&D Icons of the Realms: The Yawning Portal Inn

Kickstarter’s Zine Quest is moving back to February, and the change will be permanent