The inspiration behind the reboot of the fan-favorite setting

Share All sharing options for: Dungeons & Dragons' weirdest setting, Spelljammer, then and now

Spelljammer, Dungeons & Dragons weirdest experiment, is back. More than three decades after it was first released, publisher Wizards of the Coast is breathing new life into this classic setting of swashbuckling space pirates. We look back on its origin story, and connect its most important elements to this latest revision — due out in a three-volume set on Aug. 16.

In 1989, Dungeons & Dragons was already over one decade and two editions old. Advanced Dungeons & Dragons had multiple campaign settings — worlds like Oerth in the Greyhawk setting, Krynn in Dragonlance, and Toril in the Forgotten Realms. But where were enterprising adventurers to go when they tired of terrestrial worlds? Jeff Grubb and the team of TSR designers were tasked with creating a fantasy space setting that not only linked AD&D’s biggest landmarks, but also one didn’t violate or supersede any of those settings’ internal rules. They sat down at a diner in Lake Geneva, Wisconsin, and started brainstorming. And, like so many ideas conceived over bad coffee after too many hours in a diner, their solution was wild. 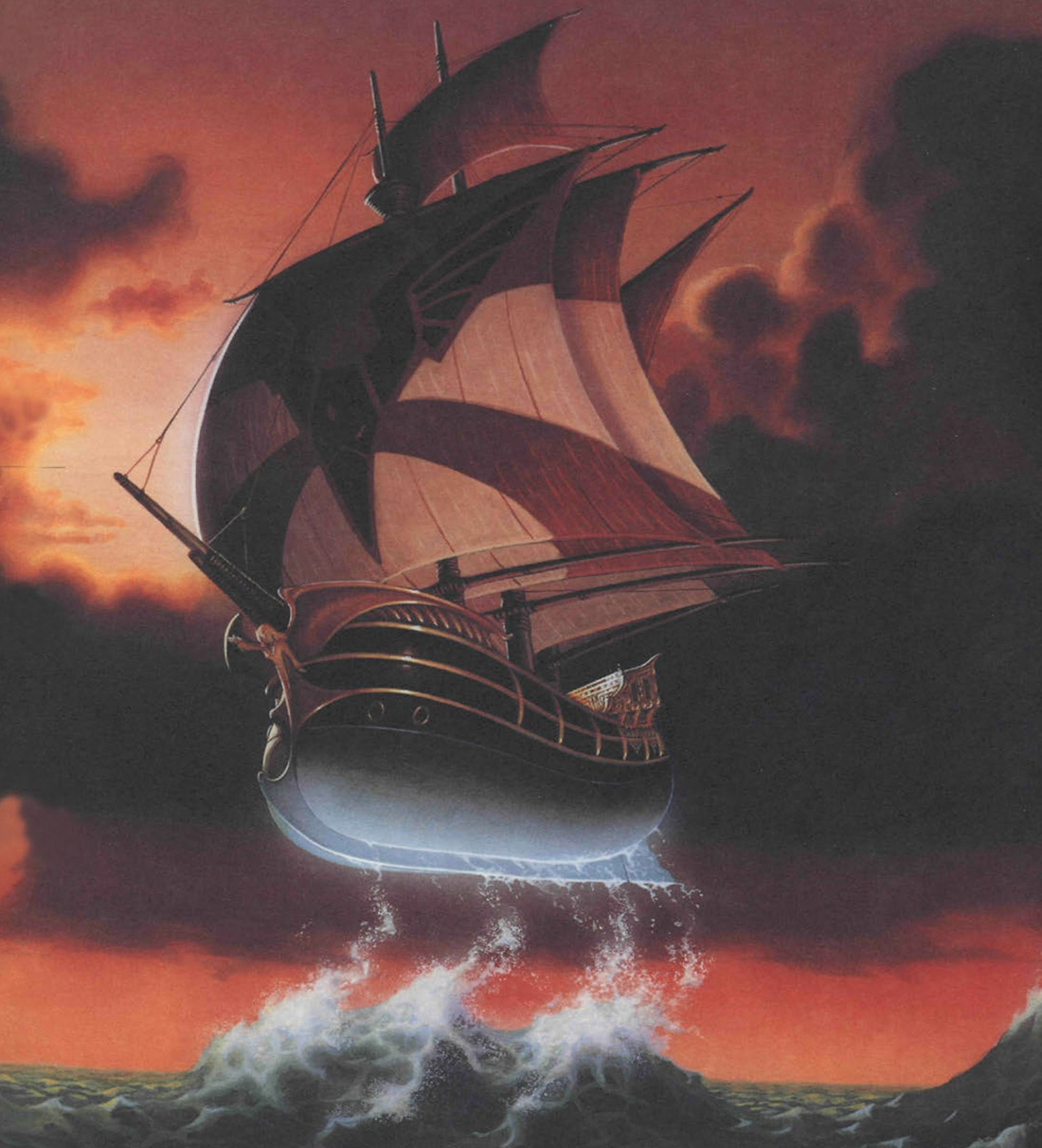 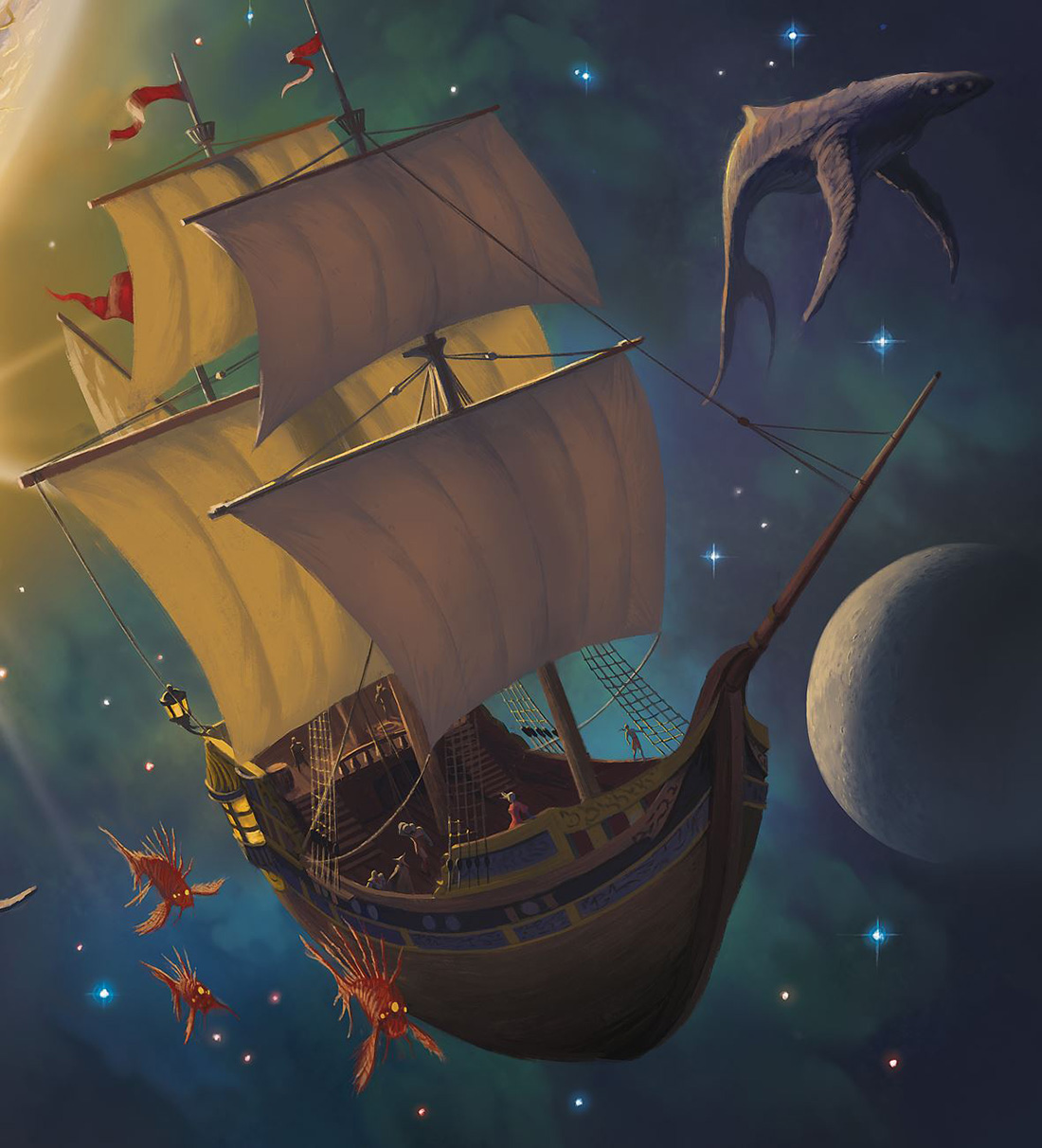 What they came up with was a wide-ranging pastiche of pulp science fiction space operas — everything from Buck Rogers to Planet of the Apes — plus steampunk, the Age of Sail, and some second-century Ptolemaic astrophysics. It had a little of everything — unknowable aliens, insectoid ships, living moons, and giant space hamsters. Wizards is taking that as a jumping-off point, keeping all the exotic elements that made the original so inspirational for fans and adding in some 1980s nostalgia and modern Star Trek for good measure.

Adventures in D&D usually take place on (or below) a single region of a single planet in a planetary system (whether a planet orbited the sun or vice versa generally depended on the setting). The Spelljammer setting requires realigning players' perspectives.

In this setting’s original cosmology, each solar system with all of its moving parts is contained in a massive bubble called a crystal sphere. Crystal spheres were made of an unknown material that didn’t have any gravity and couldn’t be damaged by any known means. Everything inside a crystal sphere was known as wildspace — generic sci-fi space with its vacuum and planets and asteroids. Crystal spheres were roughly analogous to a campaign setting. Greyhawk had a sphere (Greyspace), Dragonlance had a sphere (Krynnspace), and so did the Forgotten Realms (Realmspace).

Periodically (and randomly), a portal might open on the surface of a crystal sphere. Passing through this portal moved players from the interior wildspace into a sea of something called phlogiston. Between the spheres, phlogiston formed an endless, luminous, rainbow-colored, highly flammable, turbulent sea. The massive crystal spheres themselves floated and drifted on this sea, and currents of phlogiston created traversable rivers between them.

“When we were building this version of Spelljammer, we were trying to hook it into the cosmology that is described in the [5th edition] Dungeon Master’s Guide,” Perkins said during a preview event late last month. “This concept of the Astral Plane is like a sea, like an ocean where you githyanki ships and mind flayer ships zipping back and forth.”

“What happens now is, if you are on a planet, and you hop aboard a spelljamming vessel, and you head into space, you are entering the vast ocean — that is wildspace,” Perkins continued. “And if you continue outward to the edge of your system, rather than bumping into a crystal shell, you start to enter or see around you this kind of silvery haze, and the brilliant colors of wildspace sort of give way to kind of a silvery, purplish void through which the light of the stars of other wildspace systems shine.”

To navigate D&D’s cosmos, players will need a special ship called a spelljammer. It can be anything, really, so long as that ship contains a spelljamming helm — essentially a magical chair (think Captain Kirk’s command dais on the bridge of the Enterprise). Just as in previous editions, Spelljamming helms can be created from anything you can sit on.

Once a helm is bolted to a ship, new (magical) physics come into play. Aside from being able to fly and navigate both wildspace, a spelljamming ship maintains its own gravity and a bubble of atmosphere as it travels.

How does that work? Well, as Jeff Grubb put it in his introduction to the original Spelljammer book, “We cut ourselves fully loose from real science and began creating a ‘fantasy physics’ that was true to its own rules and laws. […] It’s magic and it knows it’s magic. The rules are still there and must be obeyed, but it is a different set of rules from what we are used to in our world.”

Spelljamming helms provided the oomph to get a ship moving, but they didn’t provide much maneuverability. For that, ships are fitted with things like sails, fins, and oars.

There is a huge variety to what spelljamming vessels can look like. What they were used for, how often they had to land (and if they landed on solid ground or in water) or if they could even land at all, and the race that built them all affected the shape the ships took. Simple ships were often just naval vessels that had been converted, but spelljamming ships could be anything from small shuttles to city-sized, mobile strongholds.

Humans especially had all sorts of standard-issue ships ranging from catamarans to Viking longships to galleons. Basically, if it sailed and you could strap a spelljamming helm to it, it can make it into space.

The new three-volume set will include rules for playing six races, all of which are new to 5th edition, but not new to Spelljammer. Wizards’ take on the astral elves will be more Spock-like, while the charming autognomes are pure mechanical constructs. The hadozee look a lot like flying squirrels and give off a big Dr. Zaius vibe. The giff, among the setting’s most iconic races, are hippo-folk with a penchant for firearms. Plasmoids should appeal to fans of Deep Space Nine, and represent fans' first chance to play as an ooze. Lastly, the thri-kreen, an insect-like mantis race originally introduced in TSR’s Star Frontiers, are coming along for the ride. Fans can get an early look at them by downloading a previous public playtest.

The original spelljammer introduced loads of new races to the game, like the dragon-centaur dracons, murderous lizard-spiders known as neogi, and a race of insectoid body modification-enthusiasts called the xixchil. This latest iteration will lean into the setting’s campy horror vibe, adding piratical space clowns to the mix.

“D&D has always been this delightful admixture of serious fantasy, horror fantasy, and whimsy,” Perkins said. “I think this setting succeeds in bringing some of the whimsy forward. [...] Space clowns are a nod to one of my favorite campy science fiction films of the 1980s, which was Killer Klowns From Outer Space. And I felt since this product is, to some extent, an homage to a number of science-fiction-slash-fantasy films of the 1980s that we would be remiss if we did not include space clowns in the mix.”

Welcome to the rock

With so much room to explore in Spelljammer, it can actually be a bit hard to find your bearings at first. Traditionally the setting has lacked a good starting point, instead offering up the opportunity for adventurers to just sort of drift in from wherever they happen to be in their home campaigns. This time around the Rock of Bral will offer new players a better foothold, filling in for the Forgotten Realm’s Waterdeep and the Yawning Portal.

The Rock of Bral, a city built into an asteroid, is known as the crossroads of wildspace. In previous editions the Rock was an anarchic and thriving space port full of markets and a place where profit could be found for any and all travelers. Like Waterdeep, the city has many different levels and mysteries. It was an illithid outpost at some point in the distant past; beholders took it over a little later; the dwarves who had a settlement there vanished mysteriously a couple hundred years ago. More recently, it became a haven for pirates who turned it into a thriving port city.

Spelljammer: Adventures in Space will include three 64-page books — The Astral Adventurer’s Guide, Boo’s Astral Menagerie, and an adventure called Light of Xaryxis — along with a Dungeon Master’s screen. Wizards promises plenty of gorgeous art inside, which could account for the total page count being a bit low for a modern 5th edition release. The setting will also be added to the catalog at the Dungeon Master's Guild, meaning that designers of all stripes will be able to build out their own adventures and other supplements and sell them online. But for a classic line that ran for nearly a decade and had 20 official sourcebooks, is this the first and only official release for Spelljammer this generation?

“We built Spelljammer: Adventures in Space to stand on its own,” Perkins said. “But if it’s a smashing success — which I hope it is — we may consider revisiting it. There’s certainly a lot of Spelljammer material that we didn’t have room for that could serve as a foundation for another visit to wild space, and so I hope that that can be a reality.”

The best actual play podcasts that don’t use D&D